4 Ideas for a skiless winter holiday

Winter holidays without skis? – Yes, such a thing exists and even can be fun. I guess, I’m not the only one who longs to get away from the crowded slopes. I’m all about beeing in nature without leaving traces of civilization. Ski touring is an option, but they say there are people who do not want to ski. Therefore, we did a brainstorming – together with the Stubai Tourism Office and the guys from the mountain guide office Stubai Alpin. We came up with four activities that do not require ski or snowboard – all of them suitable for beginners. 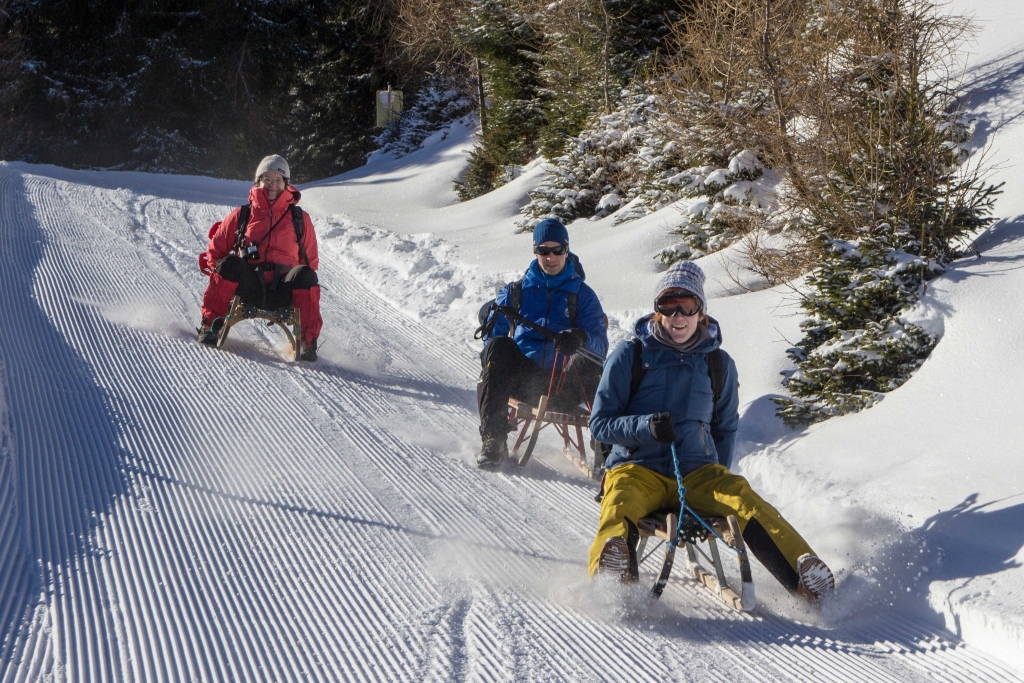 Twelve sledge tracks with a total length of 43 kilometers make the “Rodelarena Stubai” the largest in the whole of Tyrol. The quaint wooden sledge you can borrow in sports shops in the villages Neustift, Fulpmes and Mieders, by the lift stations Schlick 2000, Elfer lifts and Serles lifts or directly at the huts at the starting points of sledge runs. 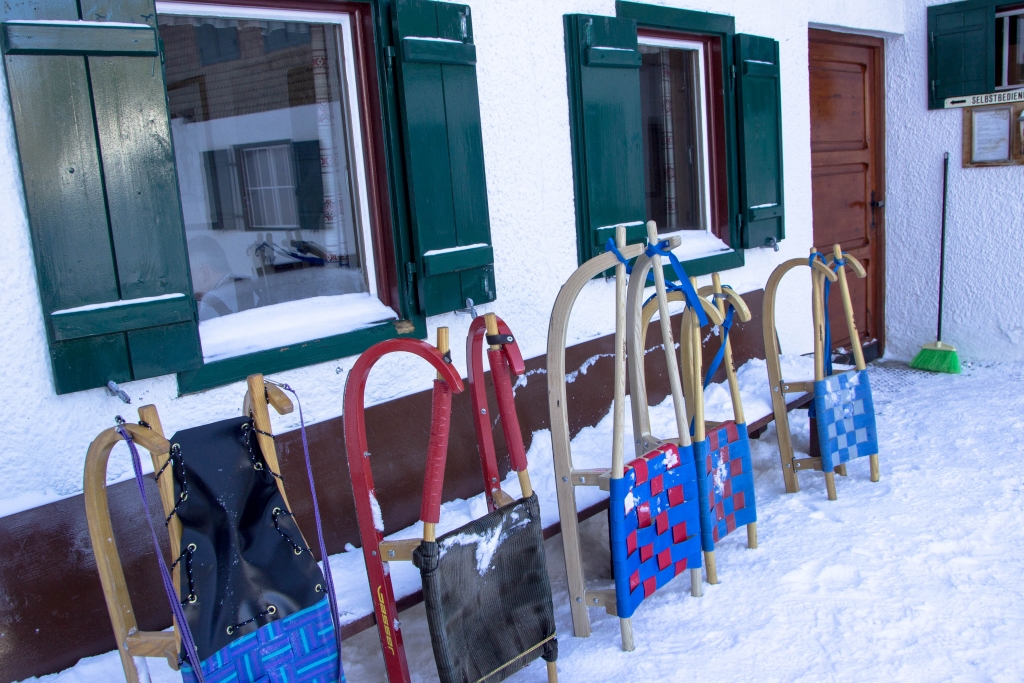 Sledges have tradition in Austria

In the old days, the sledges were a practical means of transport in agriculture. In the early 19th century the so-called luge became a popular piece of sports equipment. This kind of old-school-racing-sledge can do quite a pace – depending on braking behavior of the driver, of course.

Night owls may combine the sledging with a ski show, for example the Night of Colours at the ski resort Schlick 2000.  You borrow the sled at the lift station, move by gondola up to the top station, sip some beer or mulled wine and be impressed by the driving skills of local ski and snowboard instructors.

The night sledding back to the Stubai valley ensures adrenaline, not only because the halfdark slopes are a bit creepy, but also because of the collision risk on the sledge motorway.

On a regular base, there are four slopes in the Stubai valley that are illuminated at night. At the same time the huts at the mountain stations are open. More information is available on the Tourist Office’s website. 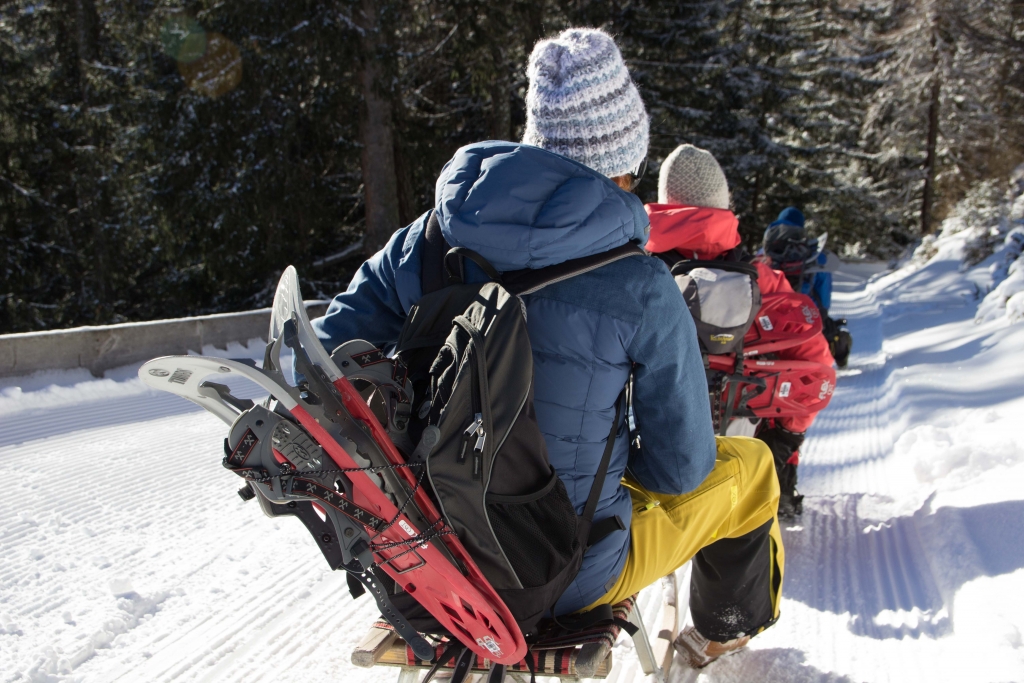 If you prefer you daytime activities rather quiet, you should sledge down from the Elferlift top station into the neighboring valley Pinnis-valley. The morning sledging is fun and is easily combined with a snowshoe hike. 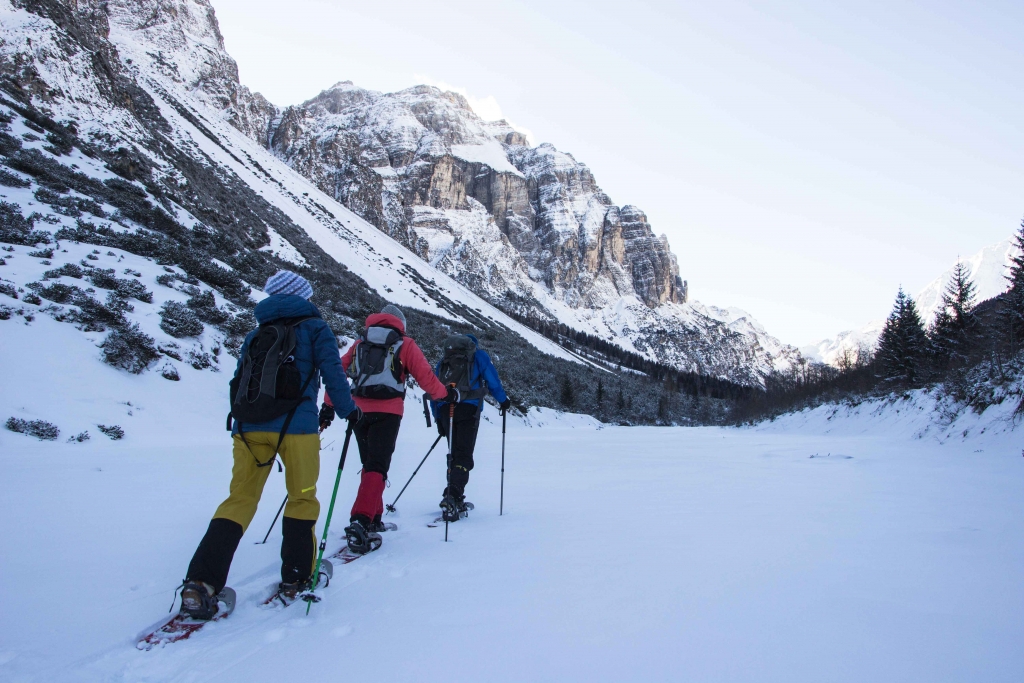 Snowshoeing, is that not boring? – No, not at all. Similar to ski touring, you are surrounded by nature and far away from the crowded slopes. Snowshoes are well suited for shallower, less strenuous tours. So you have enough time to really look around. The Pinnis-valley is ideal for natural-history-guided-hikes. Kathrin Herzer, a biologist and the local sanctuary caretaker supplied us with many interesting facts and background information on the local flora, fauna and geology. While trudging below an impressive mountain range called “Serleskamm”, we learn what animal tracks reveal, why grouse go through a hard time in winter and how mean marmots can be to each other. For more information about this tour and sustainable winter tourism in the mountains there is an article in the German Bergzeit Magazin: Protection zones in winter – what to look out for

Natural-history-guided-hikes can be booked via the Stubai Alpin Mountain Guide office. 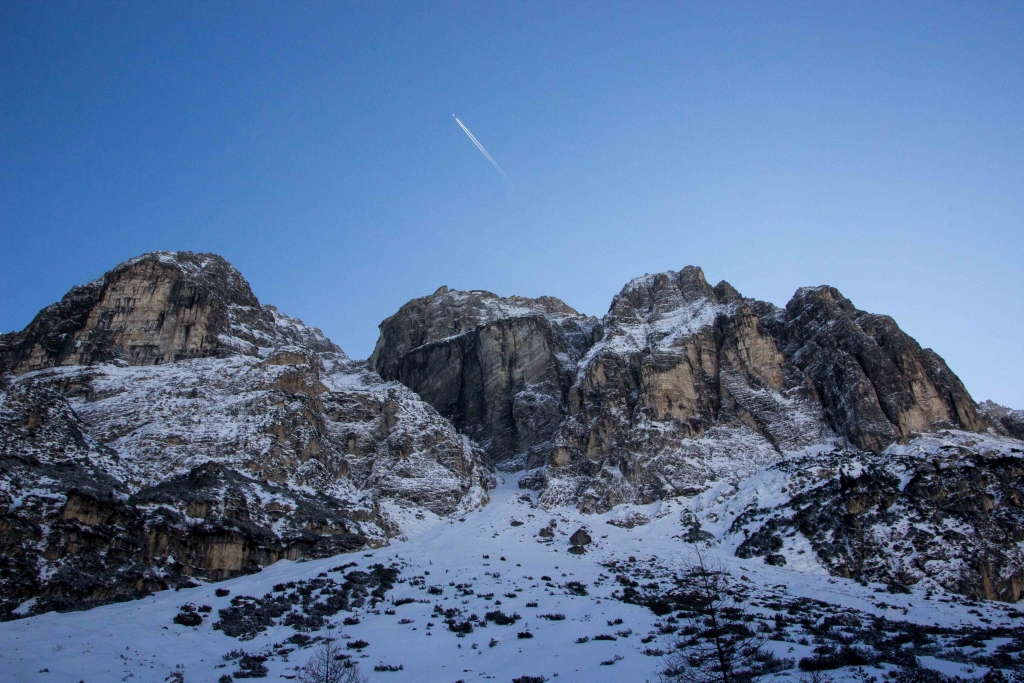 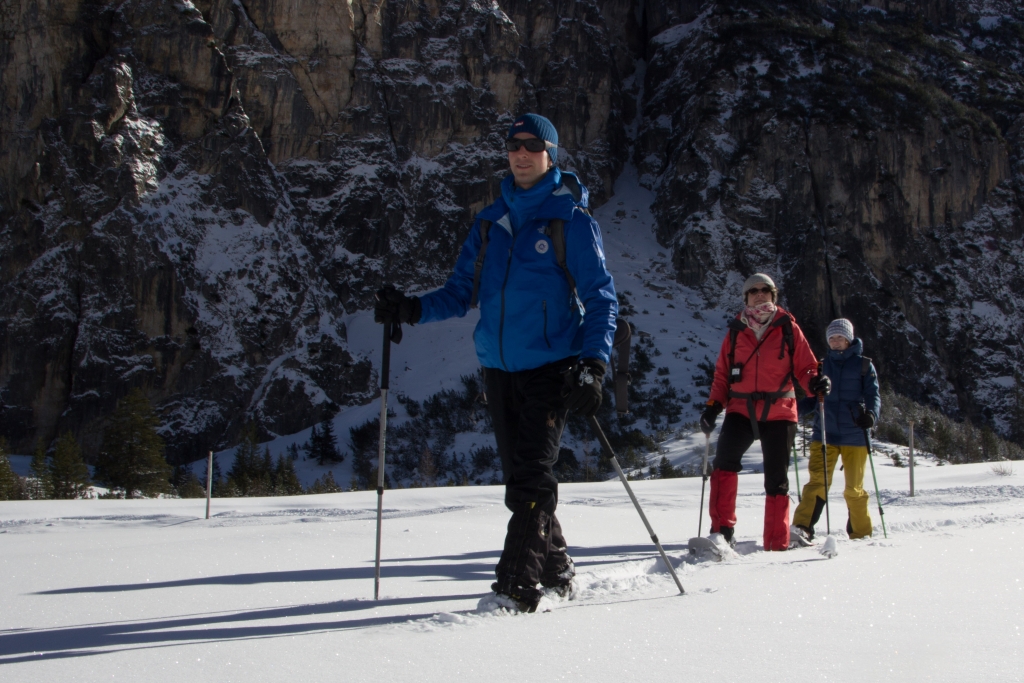 Natural-history-guided-snowshoe-hike with mountain guide and biologist

Michael Müller grew up in a mountain guide family, as a child he used to hike and climb a lot. Müller explains: “Climbing up the mountain was always wonderful, but the descent was not that nice.” Therefore, already as a kid, he thought about alternatives. This way flying became an option. 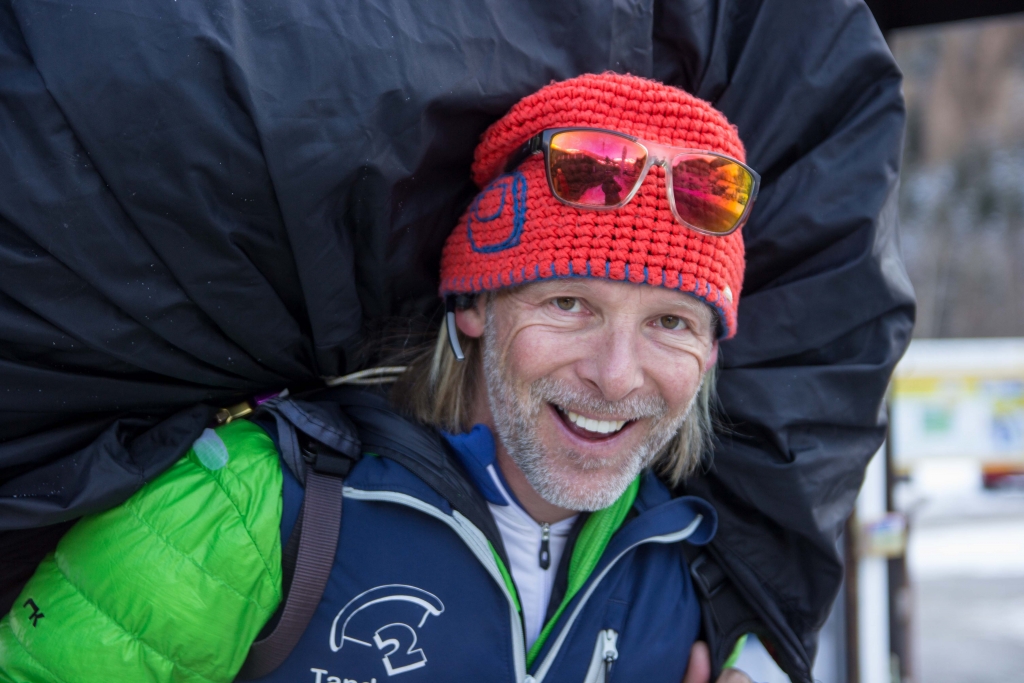 At the age of 15, Michael started to learn hang gliding. “In 1986 the first paragliders appeared. We used to combine it with skiing” Müller says. From 1987 to 1992 many manufacturers trimmed their umbrellas to achieve performance. According to Müller this trend has now reached a plateau. Currently, the manufacturers rely on low weight and safety. Müller says: “Lately, the original idea Hike & Fly is coming back, people again are more sport-oriented.”

Since he ist 19 years old, Michael Müller has devoted his life entirely to flying. He is a certified flight instructor and does tandem flights on a regular basy since 1989 . There is more information on Michael’s offer on his website Flytogether.

You could say, we were in good hands doing our first winter paragliding. To document the experience, our pilots had  GoPro cameras attached to their helmets. For a small fee, you can take the whole memory card home with you with all the movies and photos of your flight. 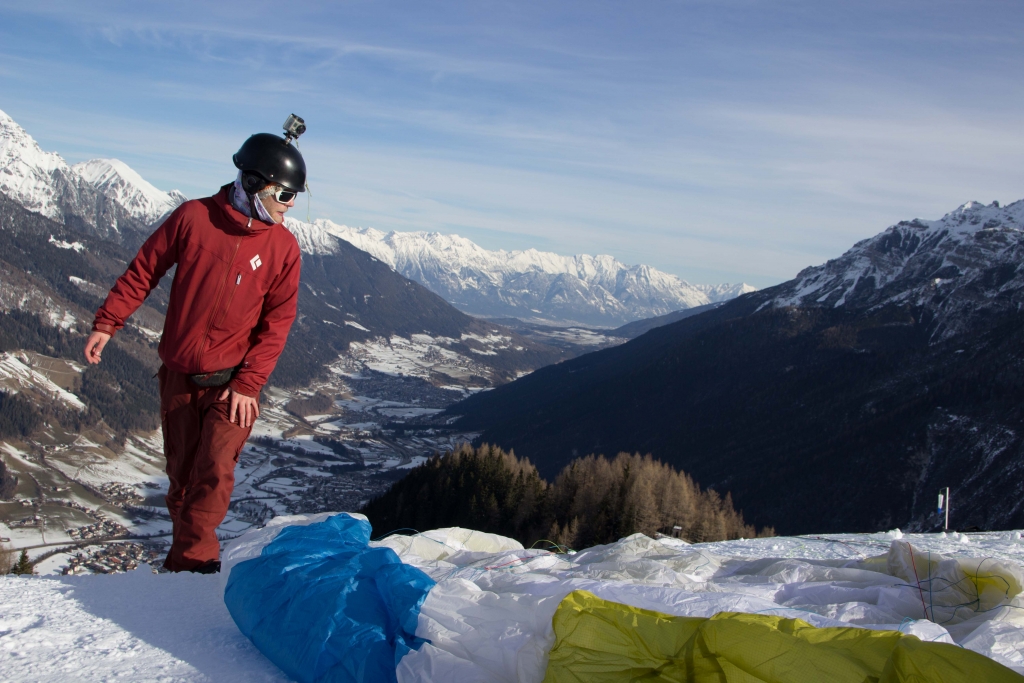 With the GoPro attached to his helmet, the pilot documents the tandem flight 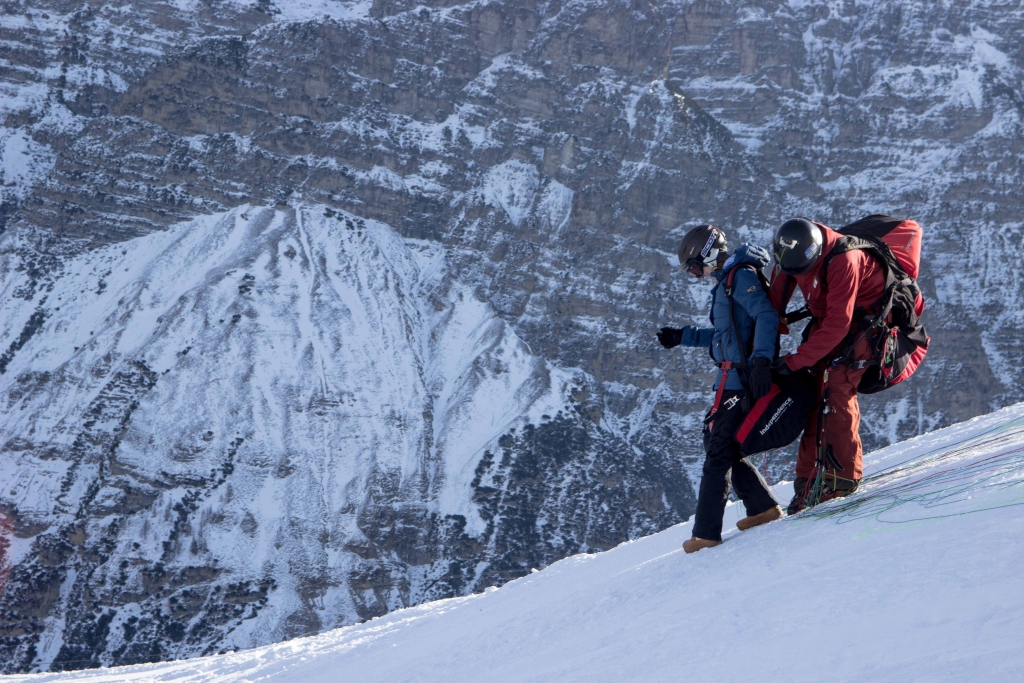 Preparations before the start

Paragliding in winter is different than in the summer, already because of the view: snow covered mountains and a dreamy little village at the bottom of your feet. This snowy landscape provides unique images. Also in terms of thermals, there are differences. Thermals are the decisive factor for paragliding, but the snow itself cannot heat up the air. Therefore, thermals depend on non-snow surfaces such as trees. In addition, the position of the sun matters: it has to radiate on slope in a right angle.

The glacier area would be too shallow to fly. Therefore, the tandem flights start at the mountain stations of Elfer lifts or Schlick2000. Theere, the difference in altitude for the flight is more than 1000 meters. On sunny days, tandem flights take place back to back, one every hour. The flight itself takes about 20 minutes depending on conditions. Including elevator ride you should calculate an hour for the paragliding. Super-high-altitude flights take longer, they are also part of the offer of Flytogether. 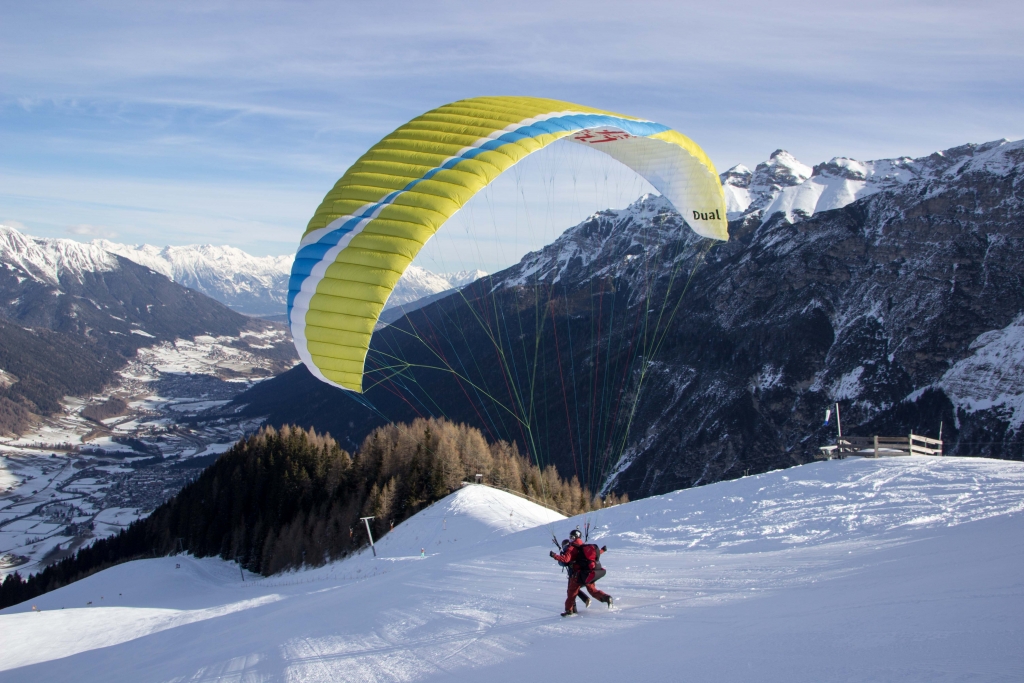 Starting on the ski slope 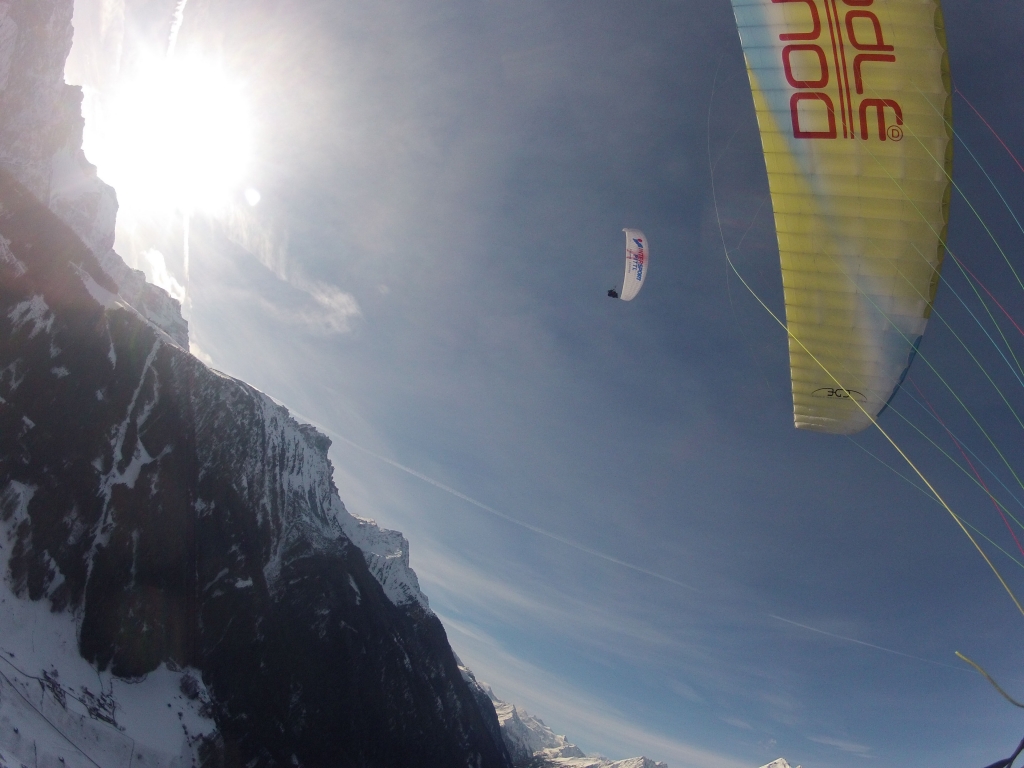 The view up: Photo made with the GoPro 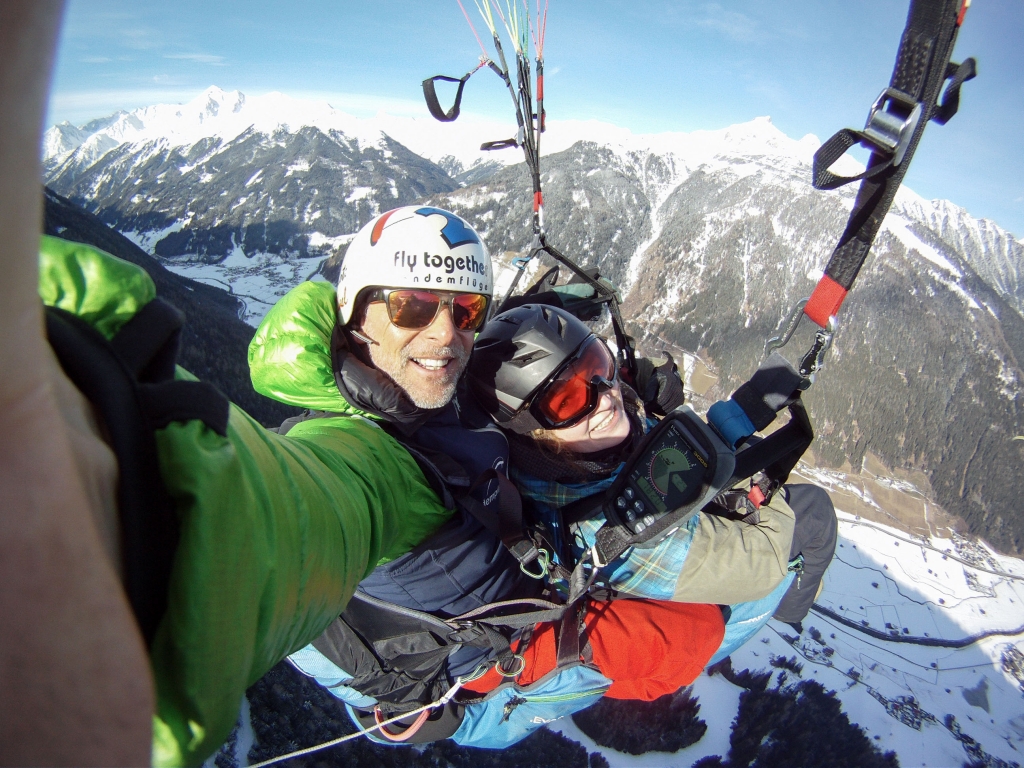 Selfie with the GoPro

Since the flights heavily dependent on the weather, it is best to confirm in advance with Michael Müller. “Making an appointment way in advance, does not make sense,” he says, one has to be spontaneous. Usually, you can only tell the day before.

You should tell the pilot about health defects such as aches or formerly broken ankles, they are not a deal-breaker but special care needs to be taken. Müller says, “Almost everyone can fly along.” He has already done flights with handicapped people. A weight up to 130 kilos is fine, previous knowledge is not necessary, because the tandem pilot tells you everything that is necessary on site.

You just need to wear the right clothing. High up in the air it sometimes has minus 20 degrees Celsius. This means: Wrap up warm with ski pants, sturdy shoes, gloves and – most importantly – sunglasses.

If you find paragliding not exciting enough, you can try yourself in ice climbing. Especially at the Stubai Valley, there are relatively many frozen waterfalls – about 20 are beeing climbed on a regular base. They have names like “Grawa Ice Gardens” or “Snow White”. In neighboring Pinnis-valley, they are called “Curtain”, “Ice Age” or “Men Without Nerves”.

With professional guidance is feasible even for a beginner like me to climb a frozen waterfall. “Being sporty helps,” says guide and ice climbing expert Marco Span. By this he means mainly rock climbing, but also other cardio and athletic sports. In my opinion, the most important are the nerves, because a fear of heights would be fatal. One must be able to trust – the ice, the equipment and the mountain guide. There is further information about the tour and lots of tips for ice climbing for beginners in the German Bergzeit Magazin: Ice Climbing – A Question of Trust. Guided tours and beginner training can, for example, be booked through the Stubai Alpin mountain guide office. They also have information on the current ice conditions. 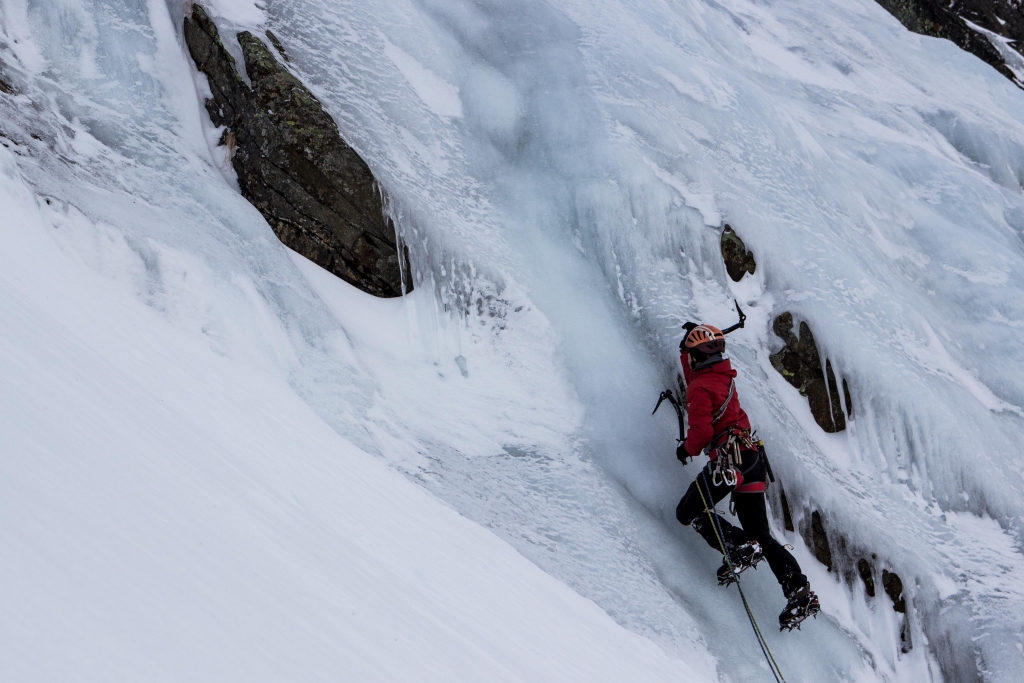 Ice climbing on Trögler falls near the Stubai Glacier 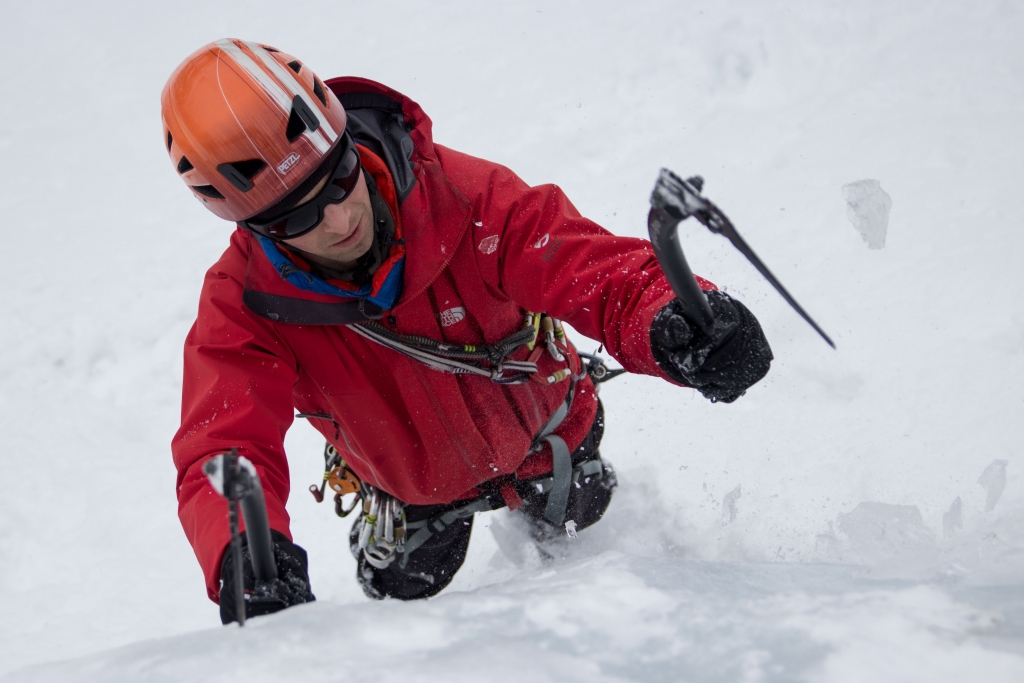 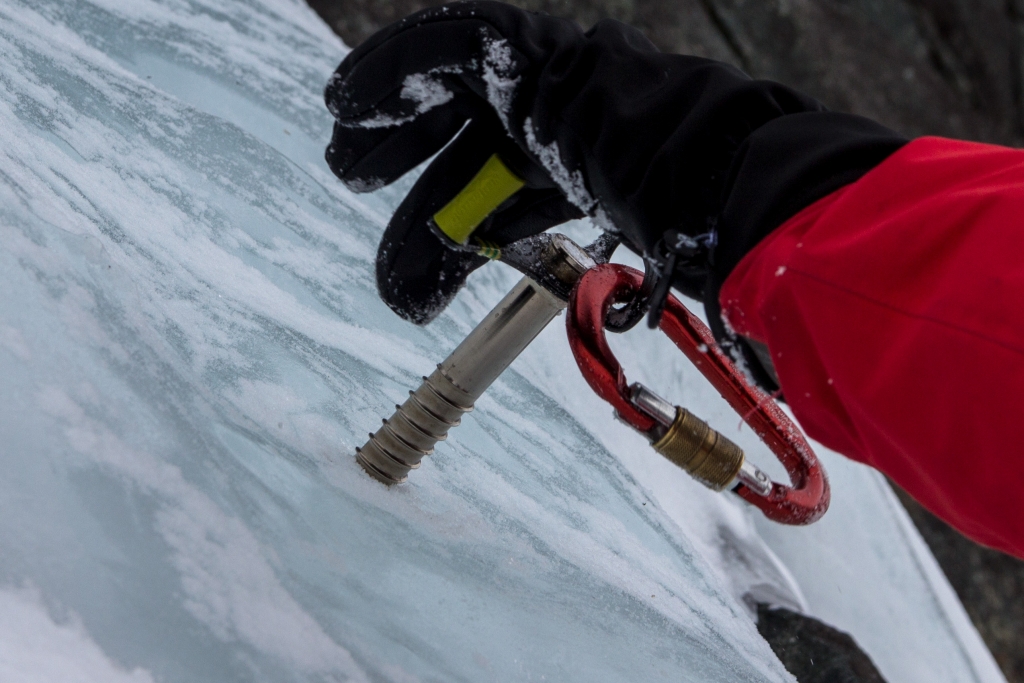 One has to know how to set the screws right

Before venturing to a frozen waterfall, you should practice ice climbing with picks and crampons. Best suited for this purpose is the ice tower at the Stubai Glacier, next to the lift station Gamsgarten. The 17 meter high tower is safe from alpine dangers and offers pleasant toprope training conditions with expert guidance. Beginner courses will take place by previous arrangement. Every Friday from December to February there is a test training from 1 to 2 pm. It costs 10 euros, no preregistration is required, ski or snowboard boots are sufficient. 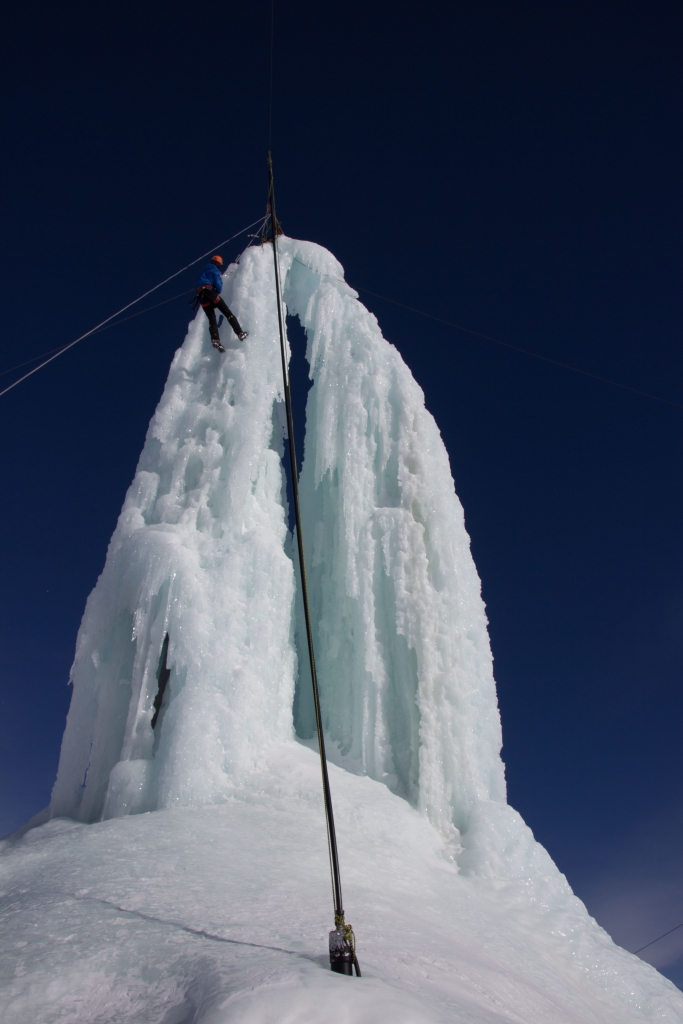 Ice tower at the Stubai Glacier 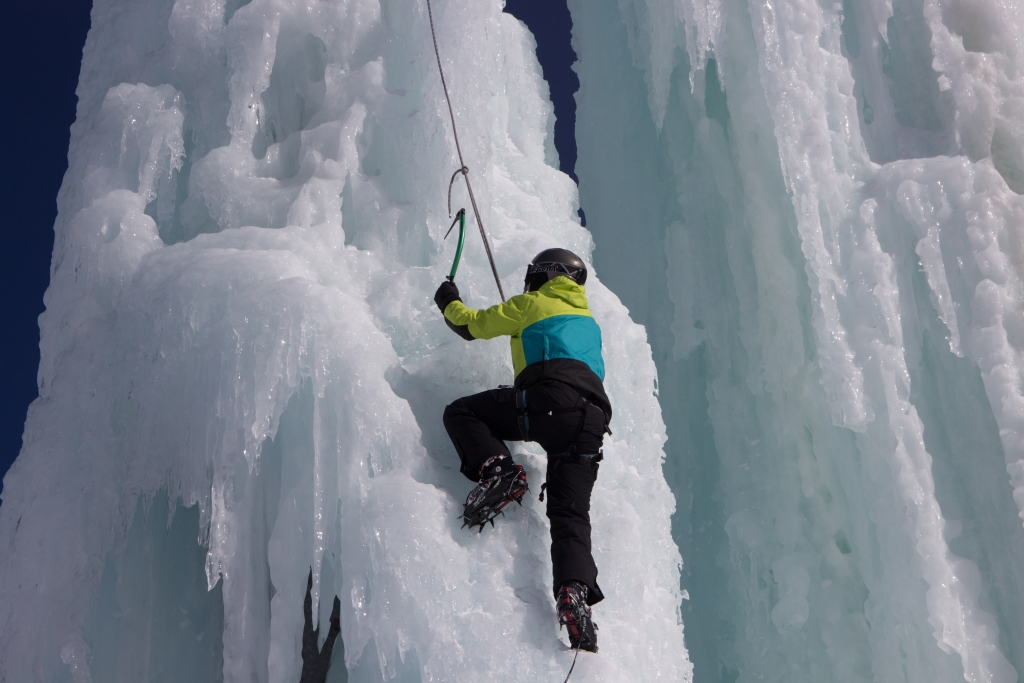 Course for beginners at the Stubai Glacier 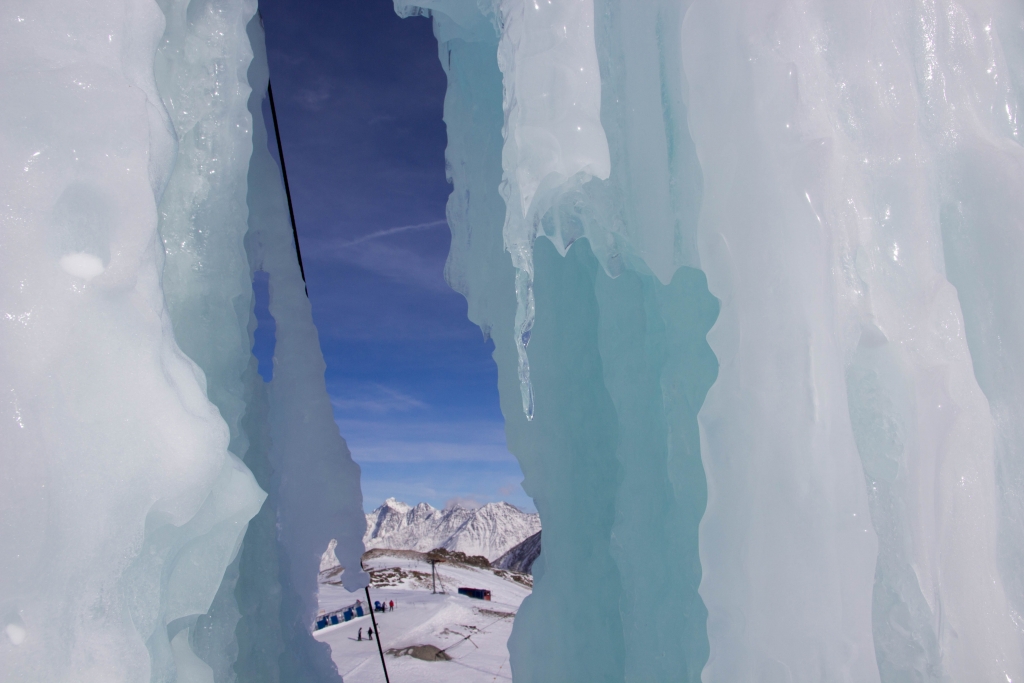 Water freezes in different ways, blue ice is the most stable

Finally, a big thank you to my travel assistant Melli, patient photo model and lost-property-office all the things I misplaced during the trip. Merci also to the mountain guides of Stubai Alpin and the Tour Operator, the Stubai Tyrol Tourist Office. Here, I also have to mention our hosts from the Wiesenhof hotel in Mieders. It’s a pleasant mother-daughter-run place.  The senior manager, Janine Kaier, has been working in the hospitality business for 40 years and  every evening puts on cooking apron herself. The outcome are unusual dishes such as fish wrapped in banana leaves, an Ayurvedic recipe from Sri Lanka. For breakfast you may enjoy homemade jams of unusual fruit mixtures such as kiwi and mango.

At the rooms, there are many different animal motifs. Janine Kaiser says, “That suits us well, because we are an animal friendly house.” It’s allowed to bring your dog for a small extra charge. The welcoming commitee is ready: in the reception area a friendly Labrador named Nala is sniggling on the carpet. She belongs to the Junior Manager, Jennifer Kaier, see the photo below. 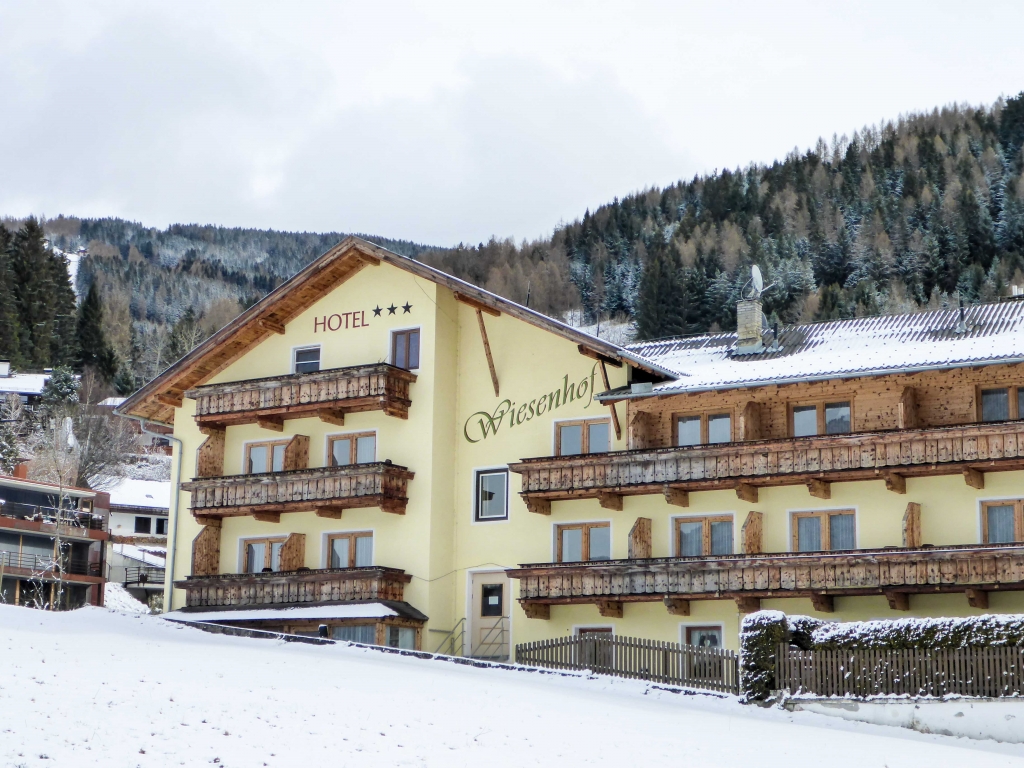 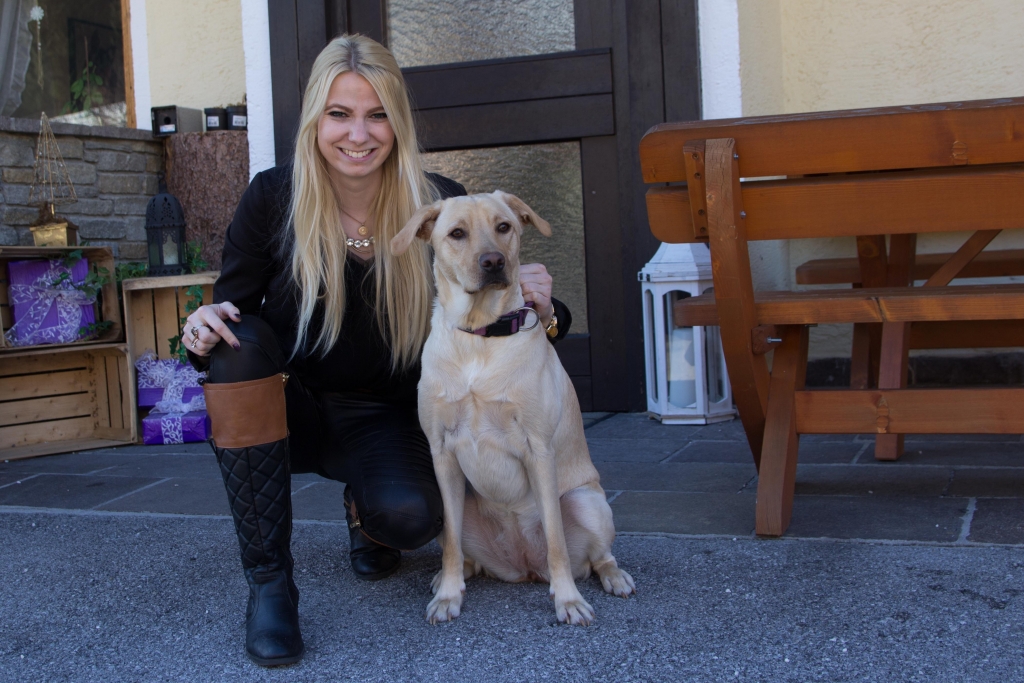