Satellites and Drones for Nature Conservation

Surveillance with the help of satellites and drones is known primarily from the military sector. However, conservationists also started to use these modern technologies to their advantage. How they do it, the following three examples show.

Scientist Koustubh Sharma switches on the computer in his office. Via alphanumeric password, he logs into the satellite server and starts downloading the data sets. They originate from Mongolia’s South Gobi region, from a snow leopard named Zaraa. Weeks earlier Koustubh and his colleague, Orjan Johansson, had sedated the young female and equipped her with a special kind of collar. 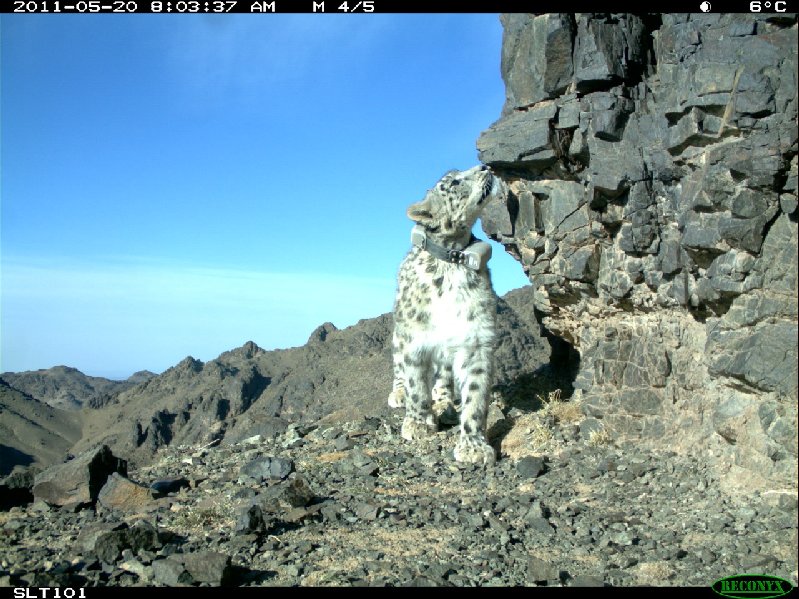 Zaraa’s high-tech collar contains, among other things, a GPS receiver and a satellite transmitter. For a period of one and a half years, the receiver regularly records Zaraa’s whereabouts. The coordinates are transmitted by the navigation satellites from the Global Positioning System (GPS). This is the same technology that supports us while driving a car or hiking in the mountains.

Every five hours, the transmitter sends the stored data package to another network of communication satellites. It’s the same technology used for satellite phones. Then the information is transmitted to a server which distributes the data to the researchers via email. The whole concept is known as GPS/satellite telemetry. When the battery of Zaraa’s collar gets weak, it drops off by itself to be salvaged and reused by the scientists. This is important since it costs around 4500 U.S. dollars. 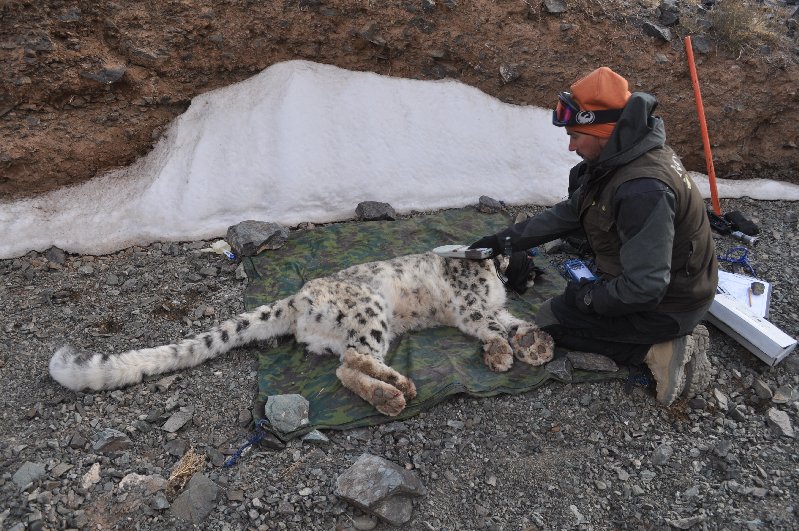 The researcher Orjan Johansson is monitoring a snow leopard, he just sedated. Soon he will equip the cat with a GPS collar. Photo: Snow Leopard Trust
Koustubh evaluates Zaraa’s data by transferring it to the electronic map of Google Earth. As a result, he can understand the movements of the big cat as dots on the map. Normally, Zaraa stays in her territory. During the day, she hides in the mountains and preys for food in the twilight. Today, however, the dots show a different pattern. According to the GPS coordinates, Zaraa has left her home, the Tost-Tosonbumba Mountains. She had hiked about 80 km through the open steppe and settled in another mountain range.
Like many of the big cats, snow leopards are threatened with extinction. Major threats are illegal hunting and habitat destruction by humans. Koustubh works for the international Snow Leopard Trust (SLT), an NGO committed to the protection of the rare animal. So far, SLT-scientists have collected migration data from a total of 19 snow leopards. “We thought that the mountain ranges in the South Gobi are habitat islands, separated by steppe and grassland. Now we know that we also have to focus on the natural connection corridors for conservation,” says Koustubh.

Thousands of miles away, the scientist Aurelie Shapiro is also looking at a screen. She works as remote sensing specialist for the World Wide Fund for Nature (WWF) in Berlin. Aurelie’s monitor shows satellite images, for example, of protected rain forests in the Congo, the Amazon or Indonesia. The pictures originate from one of many earth observation satellites in the orbit. They were provided by agencies like the U.S. Geological Survey, NASA or ESA, free of charge. “Mostly the pictures cover our areas of interest. However, for example, for the Congo there is not always enough free material available. Then we need to buy the images. They cost up to 12 U.S. dollars per square kilometer, ” Aurelie says. 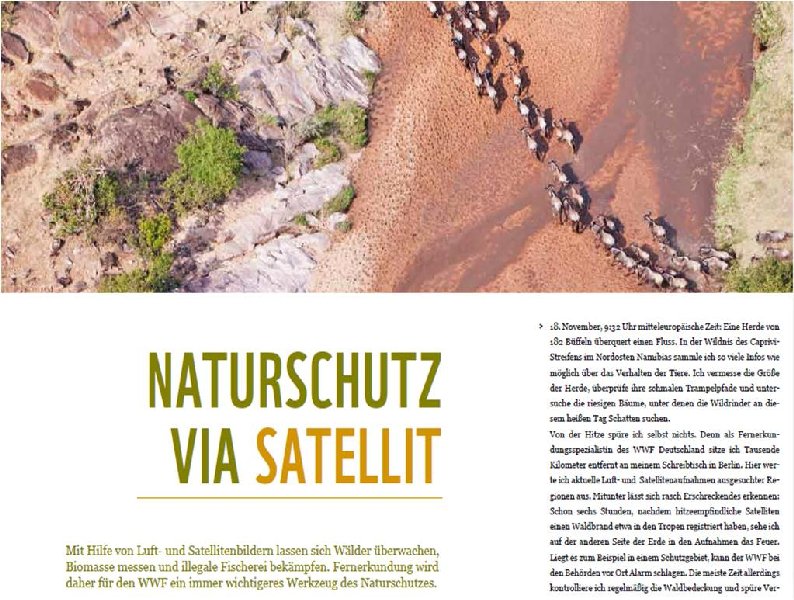 Screenshot of Aurelie’s article about her work, published in the German WWF-magazine 01/2013. Here the link for the PDF.

The geographer looks for changes in the pictures. With the help of computer programs for image analysis, Aurelie compares current recordings with older ones. “When some green has disappeared, it may indicate illegal farming or deforestation,” Aurelie says. In this case, she informs the local WWF branch or the local authorities. She forwards the GPS coordinates of the deforested site, so they can go and take a look.

In 2011, Aurelie and her team discovered a large, deforested square in a national park on Sri Lanka. It turned out that a large international company was planning to establish a more than 2,000-hectare sized banana plantation. With the help of the satellite images, the conservationists were able to obtain court order for the company to abandon their project.

On the Indonesian island of Sumatra, a team of researchers just got comfortable on a meadow. Lian Pin Koh of the ETH Zurich and his staff of Conservationdrones.org are awaiting the return of a drone. They had sent the unmanned aerial vehicle (UAV) on its way about half an hour ago. It carries a camera in order to take high-resolution images of the rainforest’s canopy. 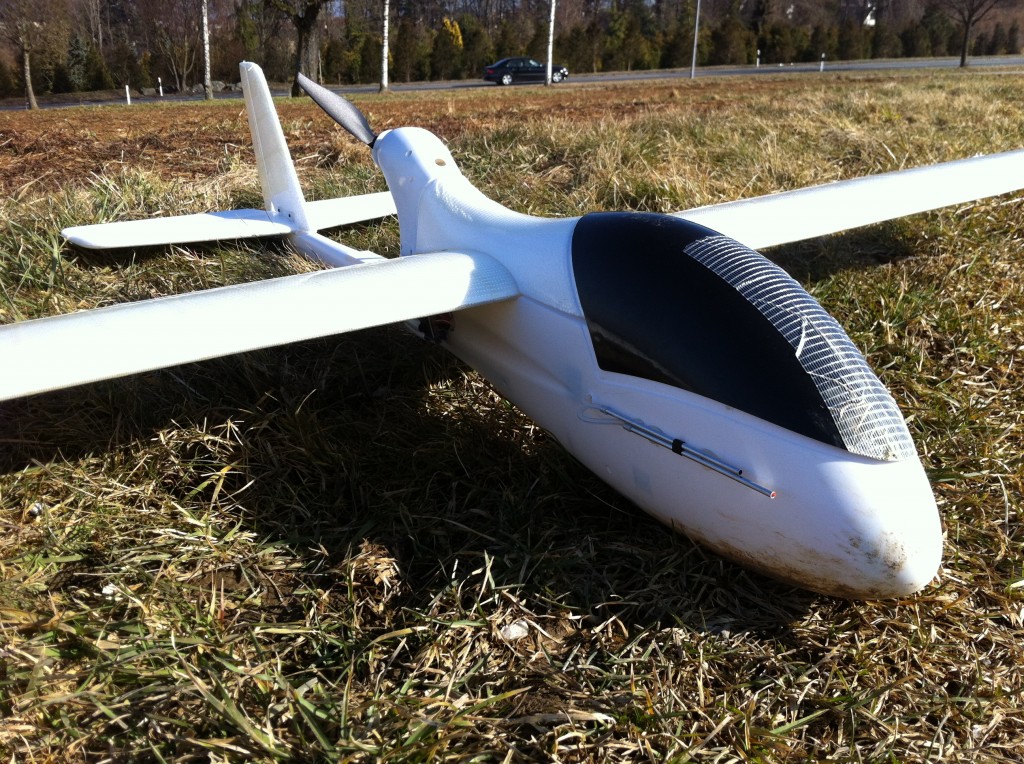 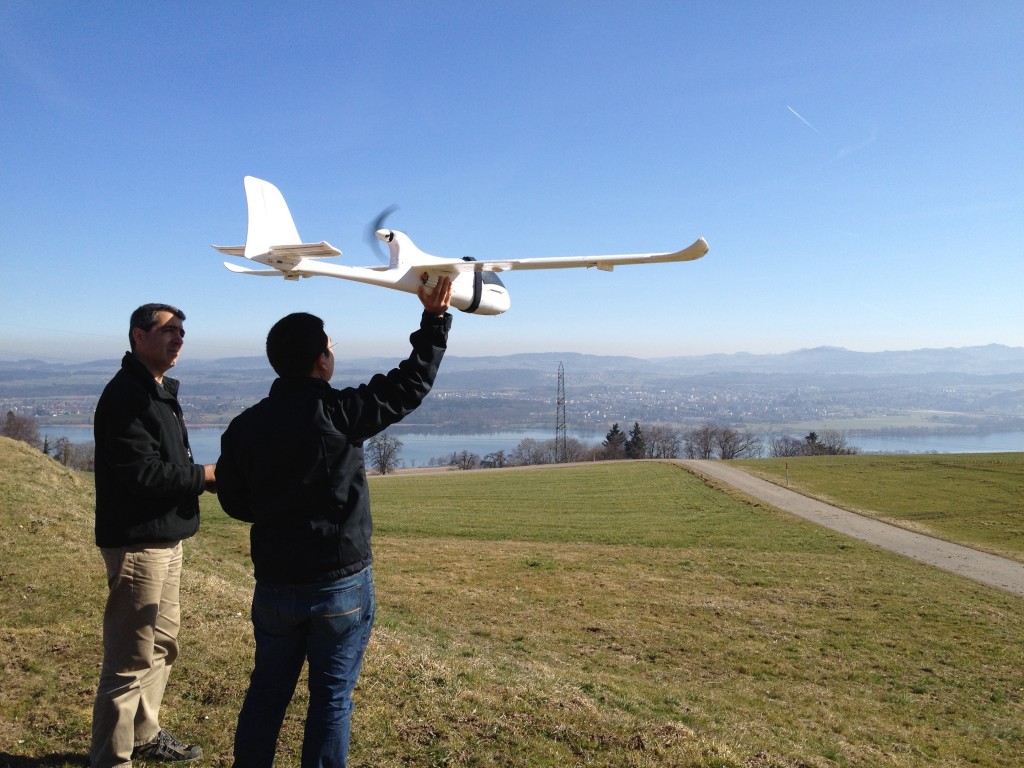 The drones are simple model airplanes, equipped with an autopilot. Hence the motto: “Now Everyone Can Drone!” Photos: conservationdrones.org

The scientists want to know, where the rare Sumatran orangutans are hiding and how many of them are left. The deforestation of the rainforest for oil palm plantations, as well as illegal hunting, have caused the great apes to be threatened with extinction. By systematic observation of the native species, conservationists want to find out which areas of the remaining forest they need to focus on.

Like all great apes, orangutans build a sleeping nest out ​​of branches and leaves every night. Based on these easily recognizable nests, one can estimate the number of animals that live in a certain area. For the counts, scientists usually venture into the forest, equipped with binoculars to search the treetops from the bottom. Monitoring an area of ​​1000 hectares normally takes two weeks. With the drones, it’s only one day.

The drones fly autonomously. Lian and his team build them by equipping simple model airplanes with an electronic autopilot. Via GPS receiver, the autopilot controls the aircraft and even starts and lands it. With the help of free open source software, the scientists can plan in advance which route the drone will take. The cost of a self-made drone, including photo or video camera, amounts to only 1500 U.S. dollars. “We deliberately use simple and inexpensive parts, so they are affordable for researchers in developing countries. Non-technical users should be able to quickly fix them in the field,” says Lian. 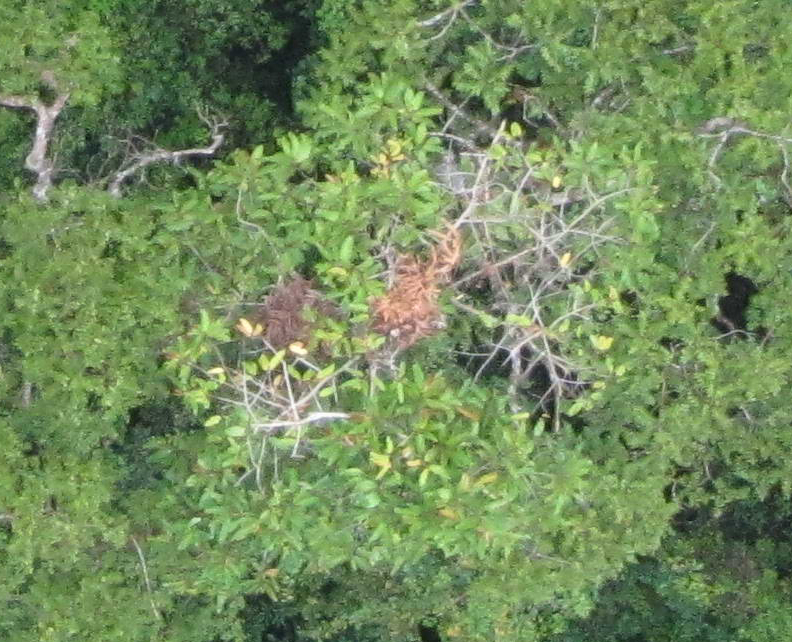 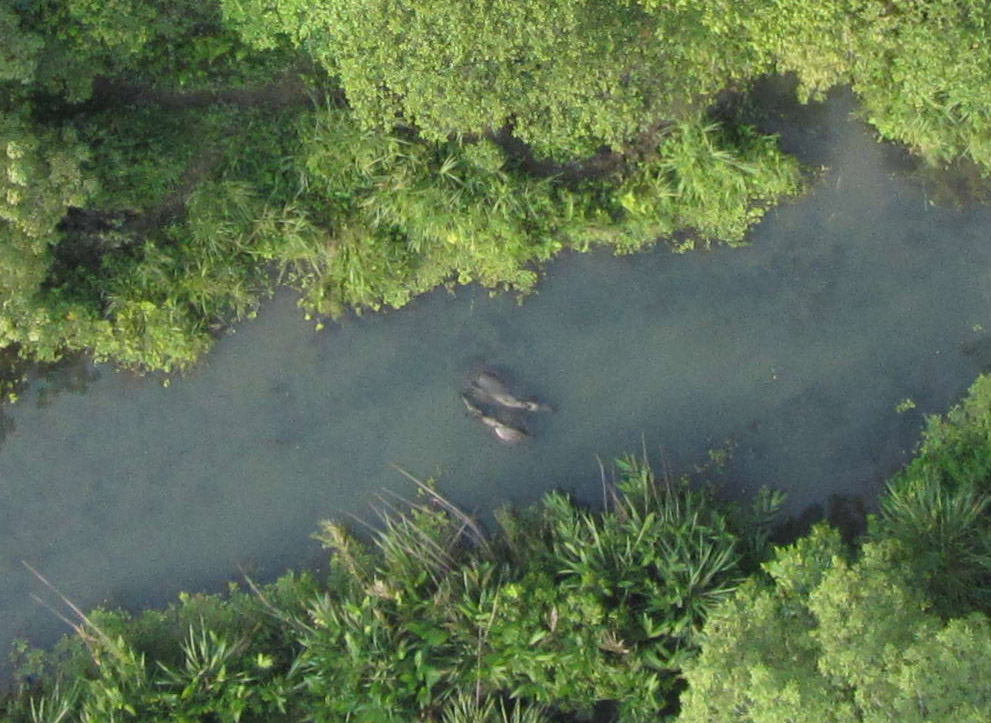 The simple technology has proved its worth. According to Lian, 95 percent of the drones come back from their mission as planned. Also today, on Sumatra, the researchers soon hear the whirring in the air and immediately afterwards the aircraft lands at their feet. They take the smart card from the camera and upload the photos to the computer. A special program evaluates the 500 to 1000 images that a drone takes per flight.  This way, the researchers determine the number of orangutan nests.

In other countries, such as Nepal, the drones are being used for surveillance of national parks. Regularly, they fly the same routes and a video camera captures the surroundings. After the flight, the park rangers watch the video and if they discover intruders, they can approach this specific area. “Especially in large areas, the drones facilitate the work of the rangers. In addition, potential poachers are deterred by the eye in the sky,” says Lian.

In this video, Lian explains the work of Conservationdrones.org: