Fox Hunting with an Eagle

The two horsemen came all the way from their small village to the canyons. There, at the foot of the mountains, the hunt starts. Anvarbek moves along the hills, his 14-year-old son Azamat rides with his horse along the valley. They patrol one canyon after another. This is a hunting trip: The young Azamat is the driver. He is supposed to startle a fox from its den. Once the fox is running, the father would kill it. However, he does not have a gun with him, but a golden eagle. 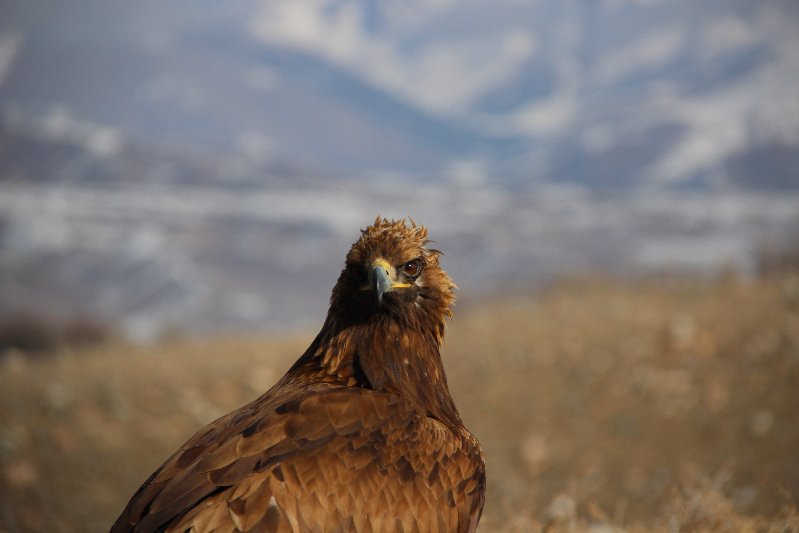 Anvarbek is one of 27 eaglemen in the Issyk Kul region. He has worked with the raptors all his life and has learned the tradition from his ancestors. He owns a small farm in the village and dairy cattle and sheep are his main income. Together with his wife and three children, he lives in a modest stone house. Hunting with his eagle is his hobby. A multitude of fox skins next to the barn are proof of his success. 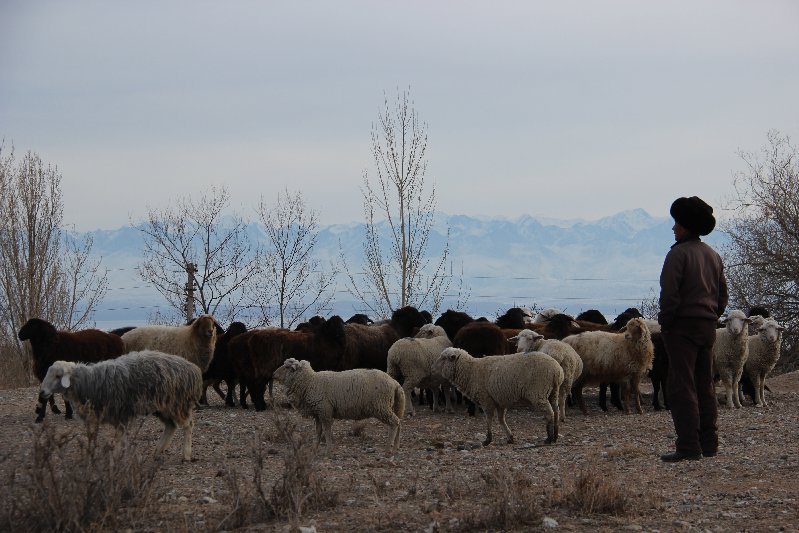 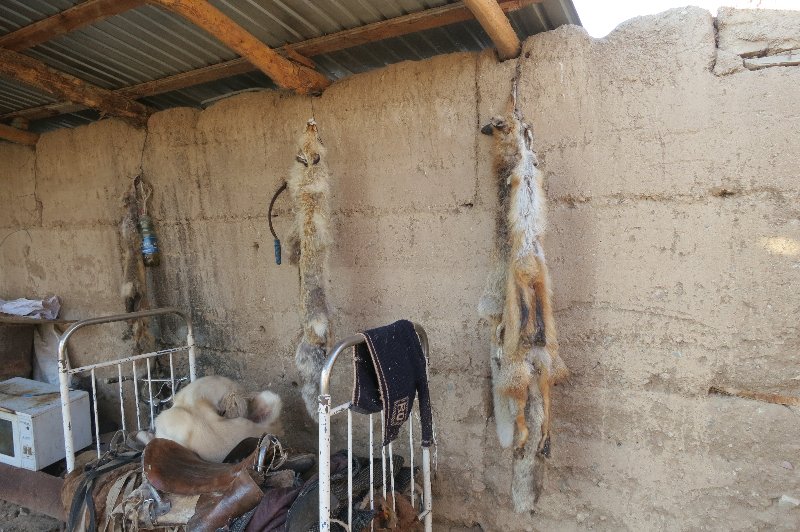 Earlier, before the age of firearms, many shepherds kept the mighty golden eagle to protect their livestock from predators such as foxes and wolves. The tradition of eagle hunting exists also in Mongolia, Kazakhstan and China. In Kyrgyzstan, the so-called Salburun has officially become a national sport. The falconer federation had fought for it. Salburun consists of three disciplines: it is the hunt with golden eagles, dogs and bow and arrow. All three together, however, you can usually only see at festivals. 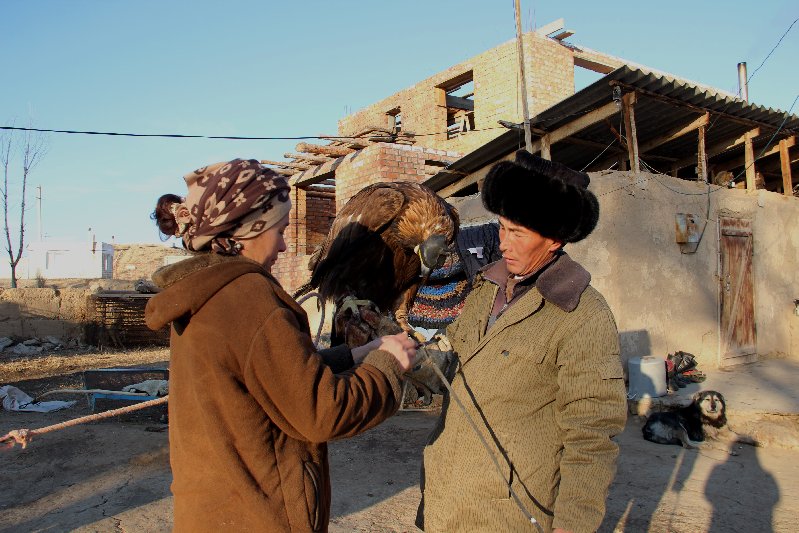 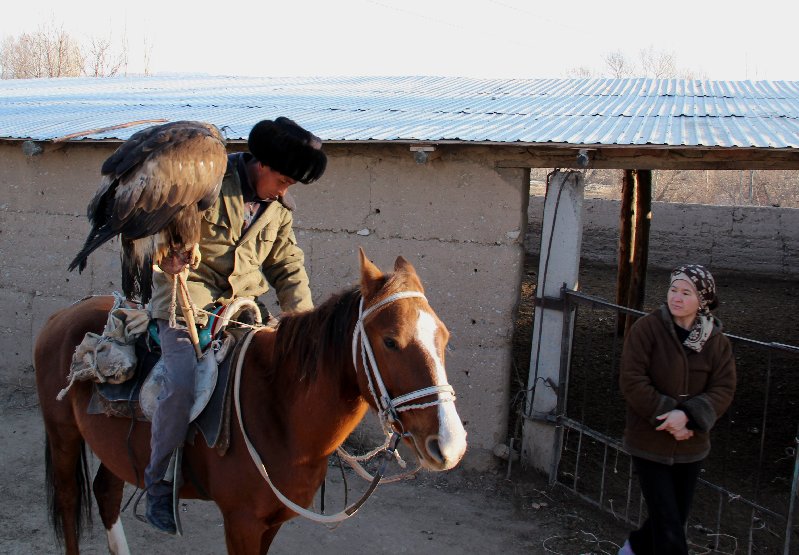 In the canyon, next to Azamat, a tall, slender dog carefully inspects the terrain sometimes with the eyes and sometimes the nose. The Kyrgyz Taigan is a type of greyhound that was bred specifically for hunting wolves. The Taigan is said to have great courage, tenacity and perseverance. According to legend, the first Taigan slipped from an eagle’s egg. This is why the golden eagle and the dogs are soul mates, as the Kyrgyz proudly tell. 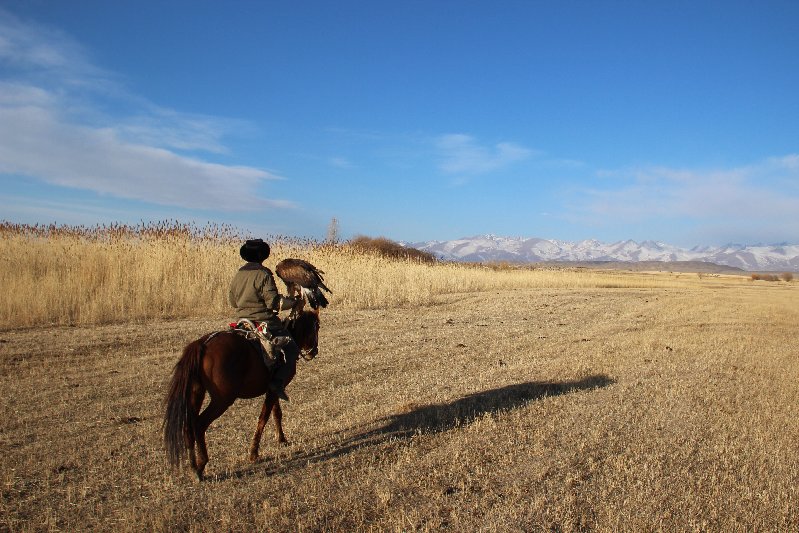 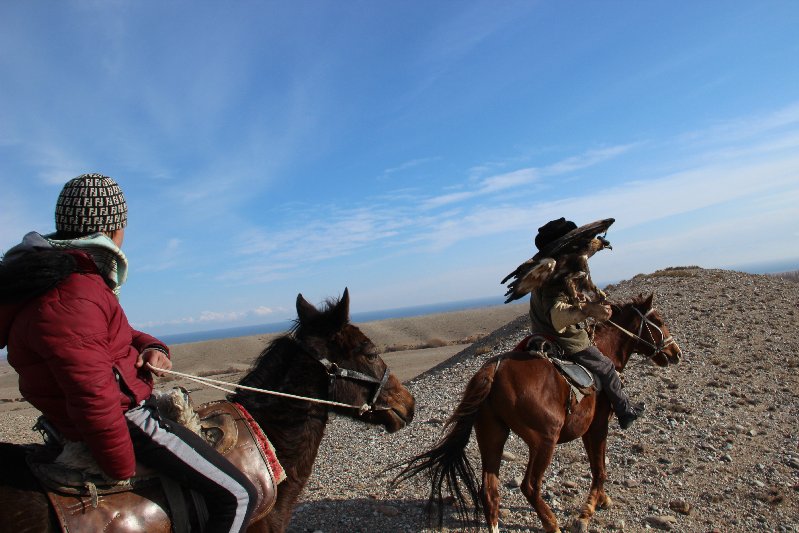 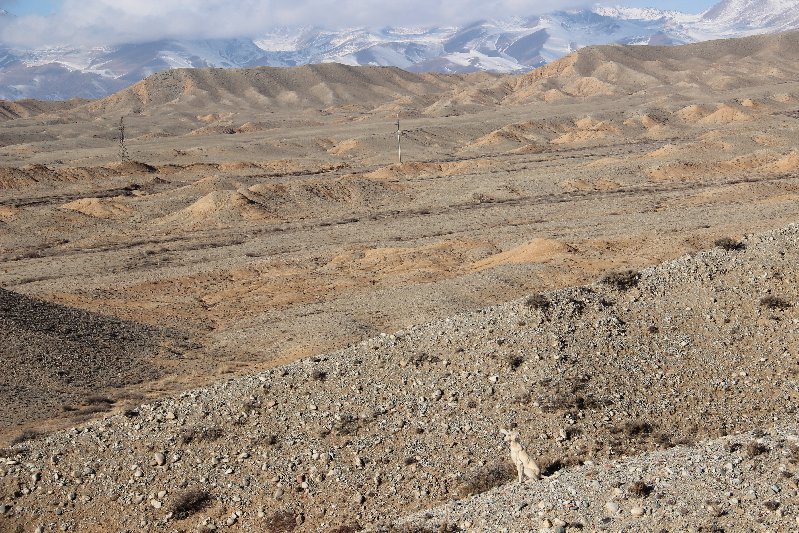 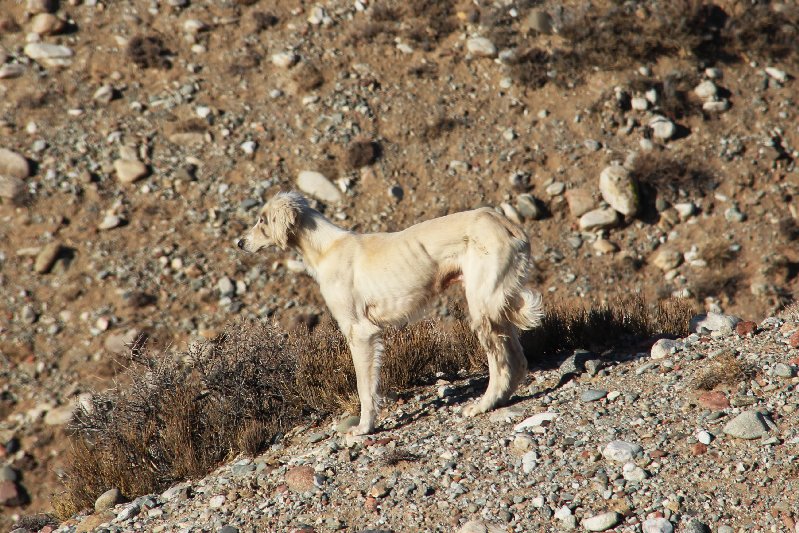 For three hours, Anvarbek and Azamat have been looking for a fox, without success. Anvarbek’s arm on which the eagle is sitting rests on a support, otherwise he could not bear the weight for so long. Father and son have already decided to turn back and ride home, as from behind a hill an old man on a donkey emerges. Azamat and Anvarbek speed up their horses to meet him. Anvarbek’s eagle adapts to the rocking of the galloping horse and only sometimes stretches the wings for stabilization. 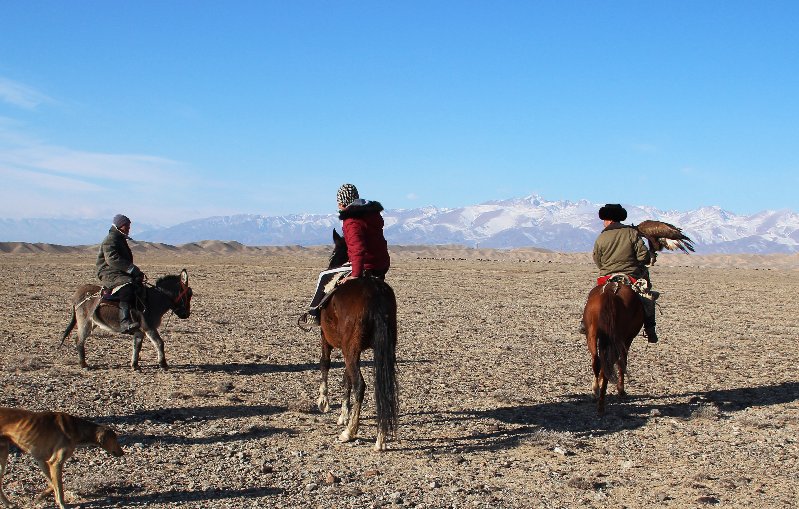 The men chat briefly. “Oh, you are looking for a fox? I just saw one over there,” says the old man, pointing with his finger to another canyon. Father and son look at each other. With this new prospect of success no one thinks anymore of turning back. The way over to the other hills is difficult. There is just a tight path through a river bed surrounded with grass as tall as a man. For Anvarbek with the eagle on the arm, this is also not an obstacle. Here, experience matters. The calmness of the hunter transfers to the beast, which has to trust his master blindfolded. Many of the younger falconers you often see getting into trouble because the eagle is flapping around nervously even with an attached hood. A large golden eagle is more difficult to control than a slender falcon and it is not pleasant to have the mighty wings in the face and behind the ears. 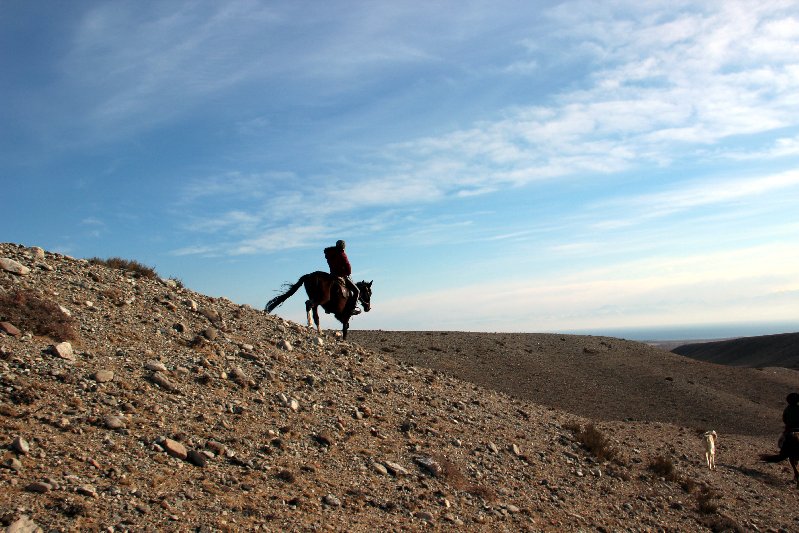 When they arrive at the new canyon, Azamat along with the dog starts making his way to the valley. He doesn’t get there because the fox is quicker. It seems as if Anvarbek knows about the fox before he even sees it. The hand pulls the cap from the eagle’s head, as the fox emerges only a few hundred meters away as white and red dot behind the hill. 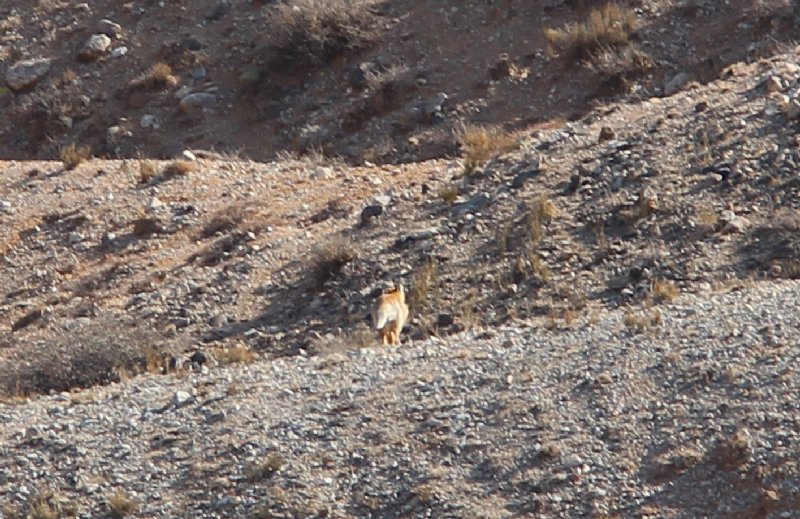 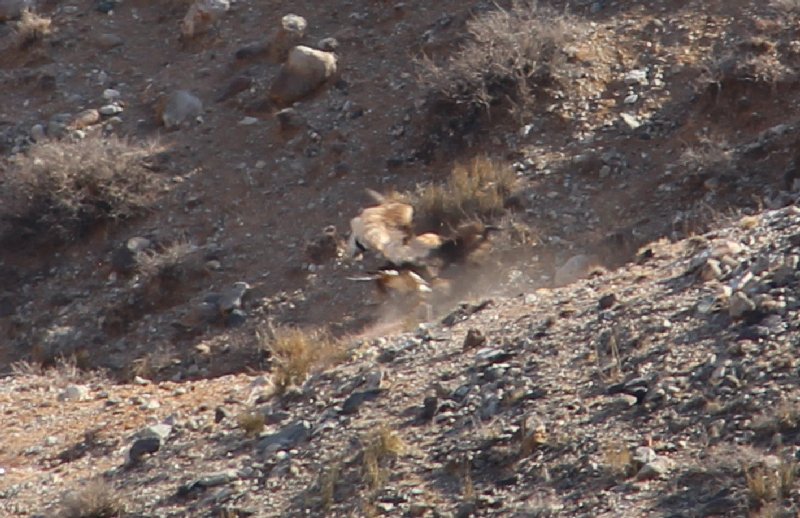 Boldly Anvarbek stretches out his arm and the eagle flies. You only hear the dull draft of large wings as it takes off. Now it gets loud. Both father and son, cheer on the eagle and cry short high-pitched screams, similar to the sounds an eagle makes. The dog also runs after the fox. The golden eagle is faster and crashes down on the fox. From a distance, one can only guess what happened, because the hunters see the spectacle as moving points on the horizon: red and brown, fox and eagle, then just brown, only eagle. What happy coincidence rescues the fox today, the hunters will never know. Perhaps a favorable hideout, perhaps a solid bite in the eagle’s chest, it is clear: the fox is gone. 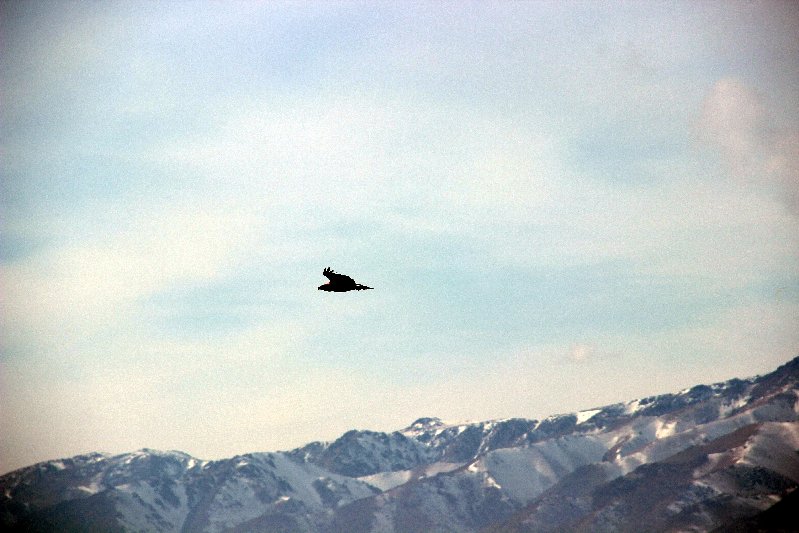 Both, the dog and the eagle are sitting on the ground to catch their breaths from the chase. Now the eagle, which is a female – normally only the larger female birds are kept for falconry – hears the cries of a wild golden eagle. The bird of prey is circling just above it and seems to greet. Once again the eagle rises up in the air and to fly with the wild cousin. From a distance, you can see that the wild eagle is old, the feathers on his head already turned white. Golden eagles can get around 30 years old. After ten to fifteen years of faithful service, most hunters release their birds so they can reproduce. 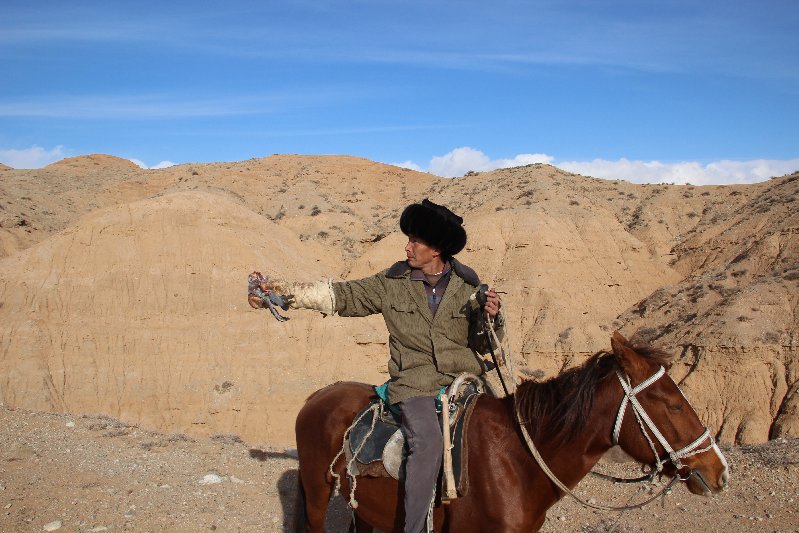 Anvarbek does not want give up his precious eagle just yet. The Salburun hunters have a special connection with their birds. Lovingly, they pet their coat and some even speak from time to time of them as their “girlfriend”. The experienced hunter Anvarbek is prepared for this situation and draws a dead pigeon from his saddlebag. He stretches out his arm and lures, but the eagle ignores him. He does not yet give up and digs again in the saddlebag. This time he pulls out a fox skin on a rope that he normally uses for training. As soon as he throws the fur on the ground, the eagle comes flying from the air with outstretched claws. It lands on the fur, erects the feathers on the neck and immediately begins to pluck tufts of hair. Thus, it is so busy that it does not even notice as Anvarbek puts the cap over its eyes from behind. 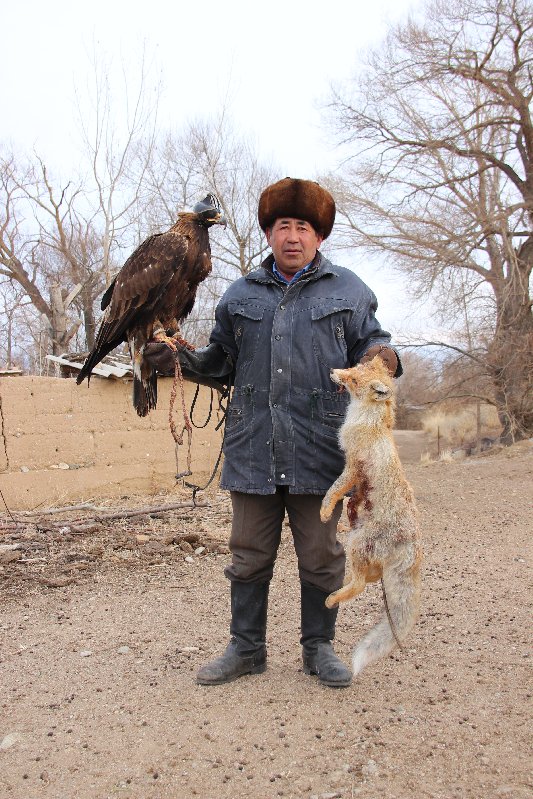 Azamat and the faithful Taigan have returned by not and the hunting party is complete again. However, the hunt is over. It will be dark soon, and father and son go on their way home. As soon as they arrive, another hunter stops by. On one arm he holds his eagle, with the other hand he proudly raises a fox. Anvarbek inspects the prey and speaks a few words of appreciation. There is no trace of envy in his face. He knows that he has often been successful and will be in the future. 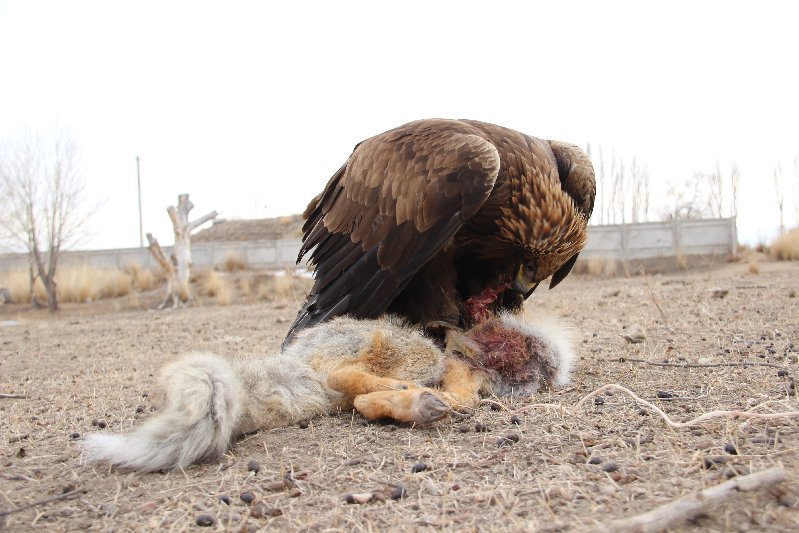 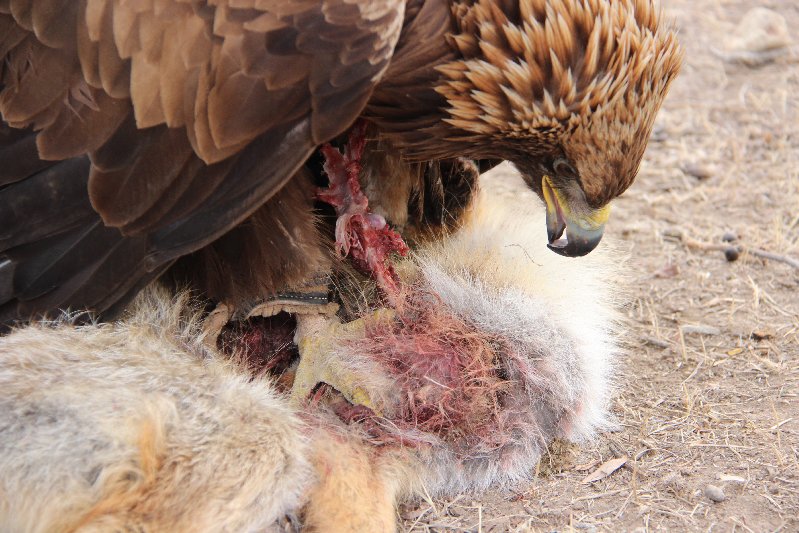 With the dead fox, Anvarbek and Azamat complete a training for their eagle. Azamat pulls it on a string after his galloping  horse. Like before, the eagle throws itself on the prey. Last but not least it gets a taste of fox meat.