What you should know about howlers

Saucer eyes and little whiskers – at the sight of baby seals hardly anyone can resist saying the words “Oh, how cute!” The childlike proportions are what cause in humans a caring instinct. Well intended is not always done well.

“There are outrageous misunderstandings,” says Dr. Peter Lienau, head of the seal station in Norden-Norddeich. “Some people pour water over the seal treating it like a stranded dolphin“, Lienau reports. It is also absolutely unnecessary, to push the animal back into the sea – unlike whales and dolphins seals have fur and theoretically could live for months on land. The “Seehundstation National Park Haus” is a care center for marine mammals. Sick and orphaned seals are nursed back to health to later release them back into the wild.

There are two species of seals living in the North Sea: common seals and gray seals. You can tell the difference, for example, by looking at the shape of the head: the common seal has kind of a dog’s muzzle, the gray seal has a tapered profile. The species also differ in size: gray seals are more than twice as large as common seals, the bulls weigh up to 300 kilograms. There are differences in social behavior, too: seals are individualists, even if 400 animals share a sandbank, this is only a partnership of convenience. Grey seals are more social, they live in flocks. While common seals are born mostly in June, gray seals are born in winter, mostly in December and January. Another big difference: While young seals experience their first moult in the womb, gray seals are born with a fluffy white birth fir called “lanugo”. They moult only after the suckling period. Until then, the juveniles must stay on land, because with this coat, they cannot swim. 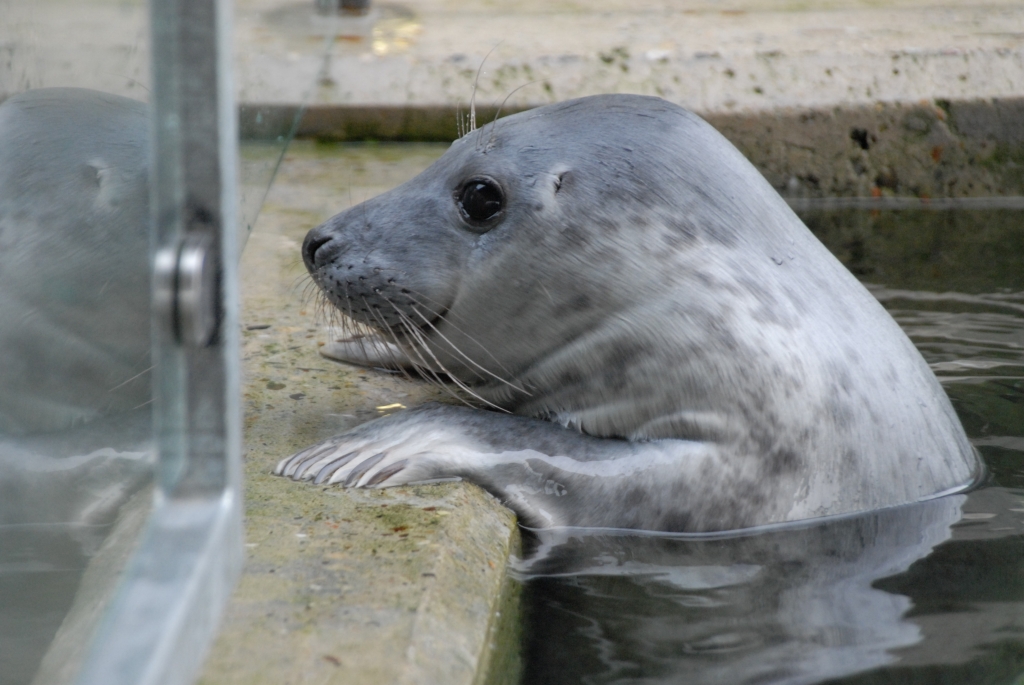 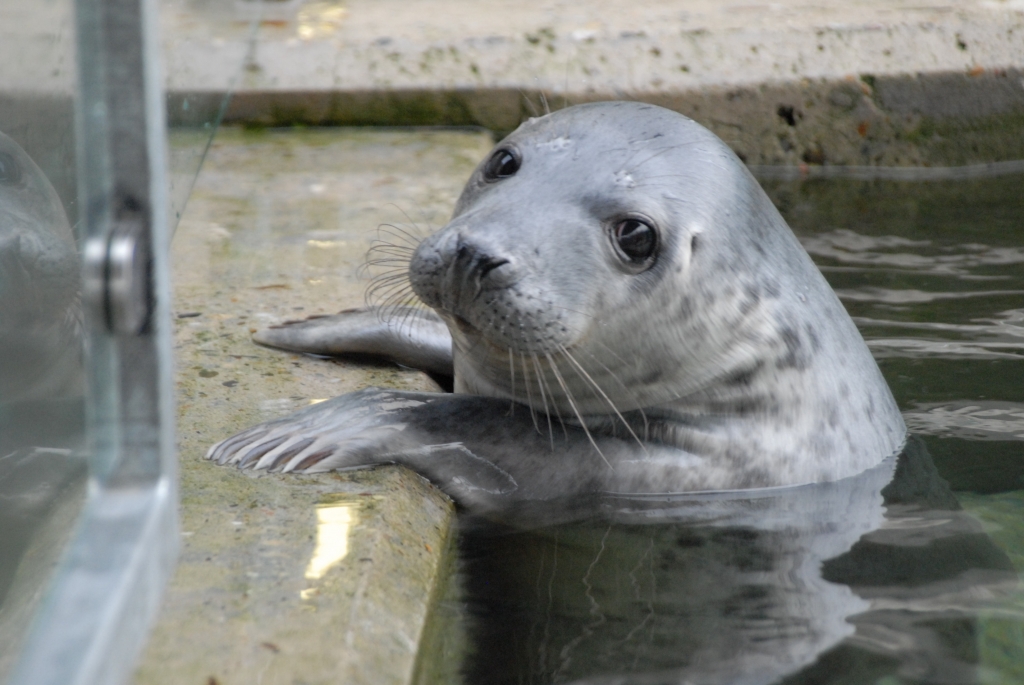 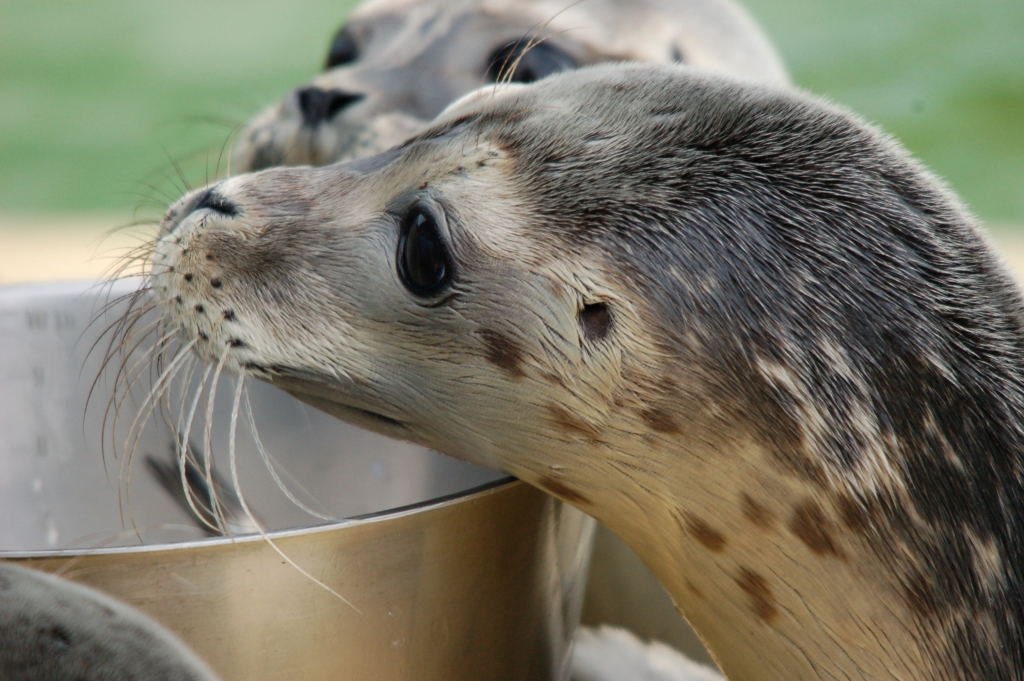 While the gray seal is a protected species with only a few hundred animals living in the North Sea, there are currently about 10,000 seals in the Lower Saxon’s Wadden Sea National Park – the highest level since the beginning of the aerial surveys in the 1970s. At the same time the tourist numbers on the East Frisian Islands are growing. From 2009 to 2014, visitor arrivals on the islands from Borkum to Wangerooge, rose by nearly seven percent. Each year more than five million people are staying on the islands. Norderney, for example, is usually fully booked in summer. No surprise that encounters between humans and seals are more and more frequent.

Because they are so cute, the animals look needy. Many holidaymakers even dial the German police’s emergency number 110. During the summer season, about 20 calls arrive in the control room daily – with numbers on the rise, Marco Ellermann is confirming. He is spokesman for the police department in Osnabrück. Ellermann explains: “This is a problem because the lines are occupied and genuine emergency calls do not get through.” The discovery of an orphaned or sick animal must be reported  directly to the seal station, the number is 04931-973330.  The seal station strives to  educate holidaymakers using a brochure which is on display at all ferries and in hotels. The brochure’s title translates to: “Seal, what now?“

About 2000 common seals are born every summer. Storms or human disturbance may cause that they are separated from their mothers and washed up to the beaches. “Howler” you call an orphaned seal pup because it loudly calls for its mother. But not every pub lying alone on the beach, is abandoned. Head of the seal station Dr. Peter Lienau explains: “It may be a juvenile that was deposited only temporarily by the mother, like deer do it with their fawns.” Therefore, it is quite wrong to stay right next to the animal to guard it. This is how you scare the mother off.

Often juveniles just got deposited by their mothers because they need to go find food. Photo: Seehundstation Norddeich

“It is difficult to differentiate when an animal needs help and when not,” says Lienau, to assess this question, there is qualified staff, so-called Wadden Gamekeepers. Seals are subject to the hunting law, however, they are protected all year. If you took a cub, you would be a poacher. If someone reports a howler,  the volunteer Wadden Gamekeepers observe from a distance, whether the mother is nearby. In the case of gray seals they sometimes are on the watch for days and nights. Only if the mother does not show up, they intervene. “A dedicated Wadden Gamekeeper once remained on observation posts for 24 hours during a snowstorm,” says Lienau.

Island Visitors should respect designated seal areas and resign on photographing at close range, with the smartphone, for example, to not disturb the animals. “Regular food intake is vital for young seals,” Lienau explains. Pups get suckled by the mother four to six weeks, then they are on their own. At this point, they should weigh about 20 kilos. Just five kilos less and they are susceptible to parasites and often die from complications.

To conserve the animals’ energy reserves, you should maintain a optimum distance of 300 meters, at least 50 – also for your own safety, Lienau warns. Despite the cute appearance seals predators which have sharp teeth. The gray seal is the largest predator in Europe even, followed by the brown bear and the common seal, only then by wolf and lynx. Lienau says: “Seals would never actively attack, but they can defend themselves if they feel threatened.” An encounter with a free-running dog would be fatal for both animals. Therefore on all the islands dog must be kept on a leash all year round.

At the seal station in Norddeich every year there is about one percent of the Wadden Sea’s total seal population. The care center which also has an environmental education station is open to visitors. Through a glass pane you can observe the fosterlings. Who wants to see seals in their natural environment, should attend a certified National Park cruise, advises Lienau. All major shipping companies offer these kind of cruises to the seal banks. 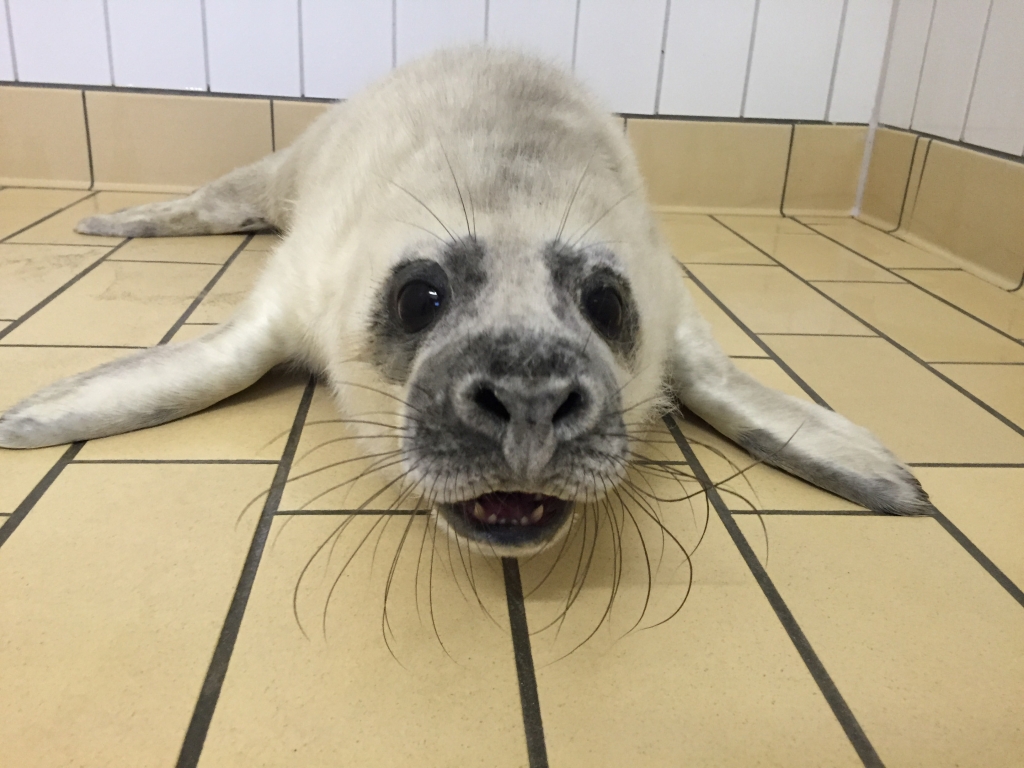 Gray seal baby Ernstel came to the seal station this past February. Currently, Ernstel is being nurtured with salmon pap and herring. As soon as he is strong enough, he get released into the wild.

The photos were kindly provided by the seal station in Norddeich.