Working on a Mountain Farm

Fresh air, mountains, green meadows, and above all, honest physical work – this is how you imagine a summer job in the Alps. But when the joints ache, breaks no longer suffice to recover and the neglected brain screams for new tasks, this is when you wake up.

By the way, I’m from the country, so don’t think I would have given me great illusions. I even thought, I knew what I was getting myself into when I took the job on the Swiss mountain farm. Two years ago, I worked on an Austrian “Alm” and thought the place in Switzerland was a real chocolate job. Although, my boss was okay and the tasks varied, after two months there, I had only one thought on my mind: “I’m too old for this shit!”. It took another two months for the fingers on my right hand to be fully operational again.

Here’s a quick review of an alpine summer, which was just as beautiful as painful: 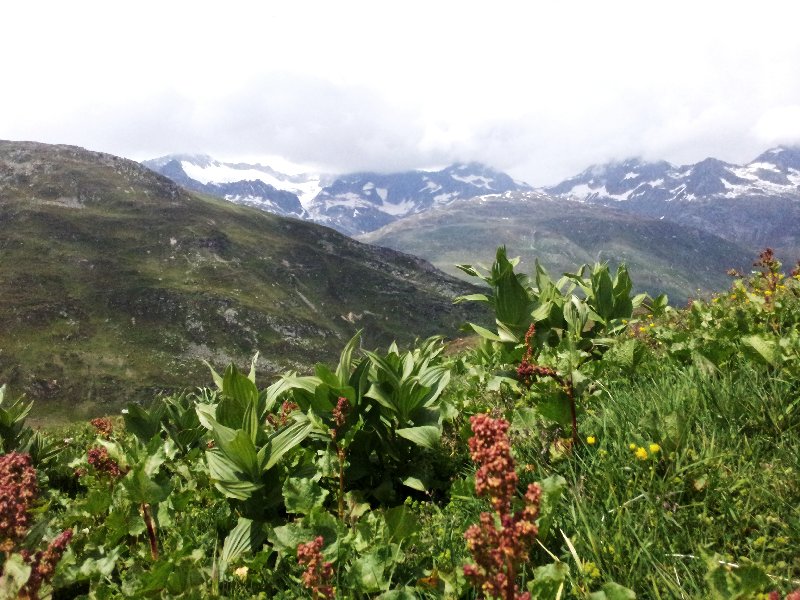 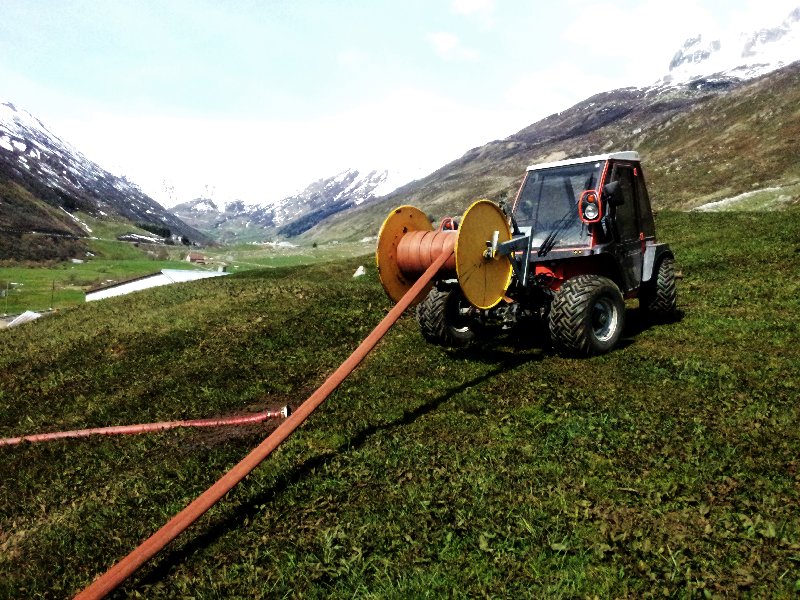 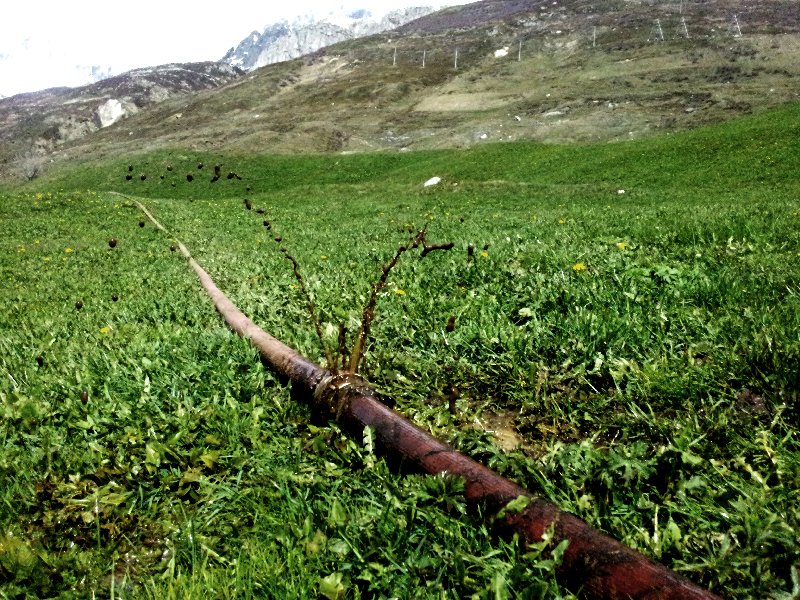 It all started in May. Full with enthusiasm, I put up mole traps, did farm chores and helped bringing out the liquid manure. We had to move the hose all the way from the barn to the mountain pastures because a tractor with a trailer would have flipped over. The only vehicle that can withstand steep mountain slopes is the outrageously expensive Metrac which costs over 100,000 Swiss francs. Even if technical difficulties made it a tough chore, I took it with humor as you can read here: Girl vs. Slurry Pump.

Being a biologist, of course, I happily work with animals. You may have noticed this already in my former blog entries. The Brown Swiss cattle is very grateful and good-natured. Also, my boss owned just a few dairy cows and some younger cattle. No aggressive suckler cows, not a single one with horns. Therefore, cow derived injuries were limited and more likely due to human stupidity than to animal aggression. 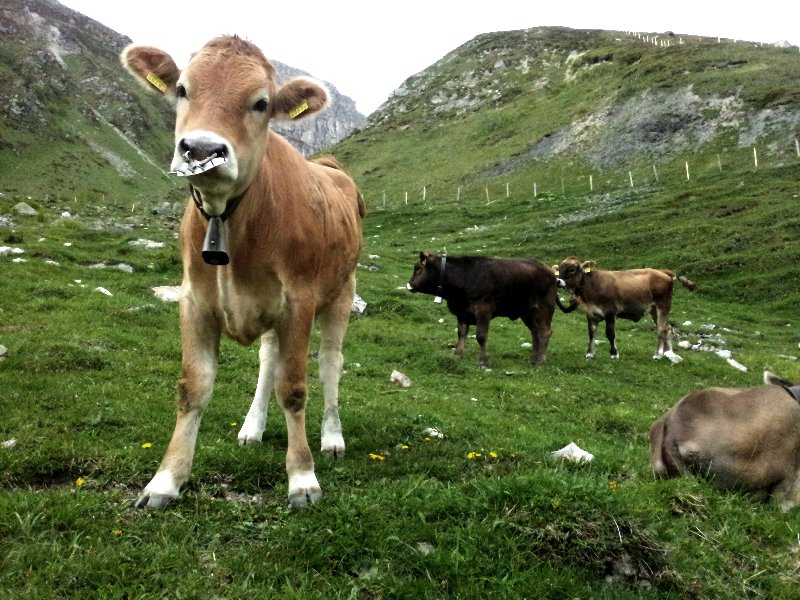 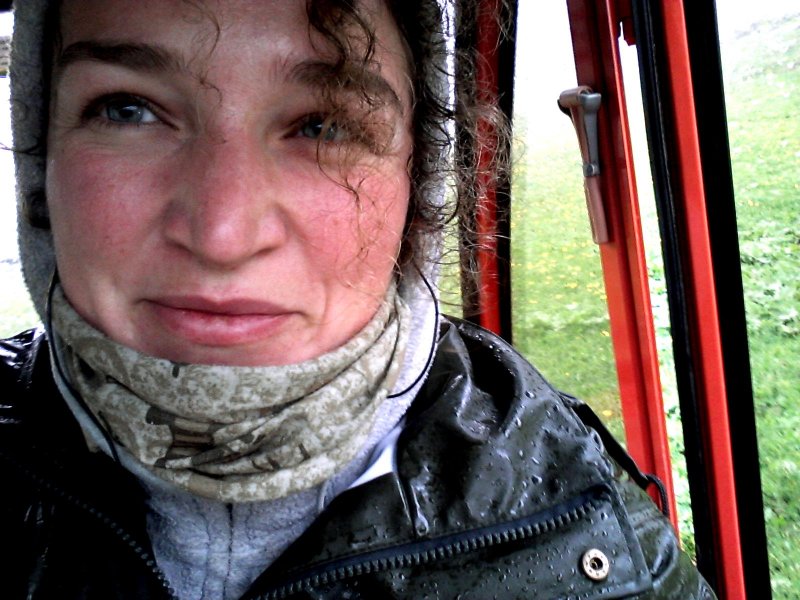 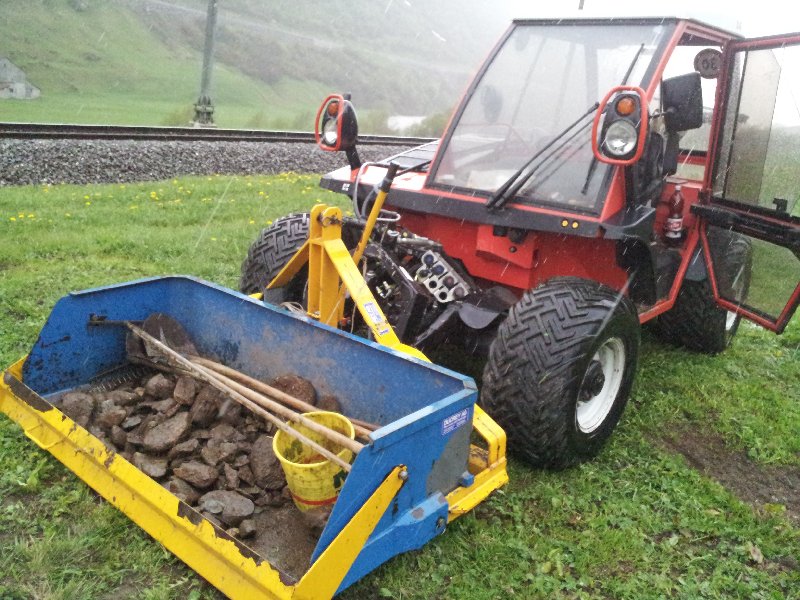 Mountains are full of rocks. That probably doesn’t surprise you, but have you ever thought about the fact that these rocks interfere with mowing.  So you have to get rid of them. Picking rocks is quite some fun when it rains, even after the rain stops, because it washes new rocks to the surface. On the bright side: I got to drive the Metrac. 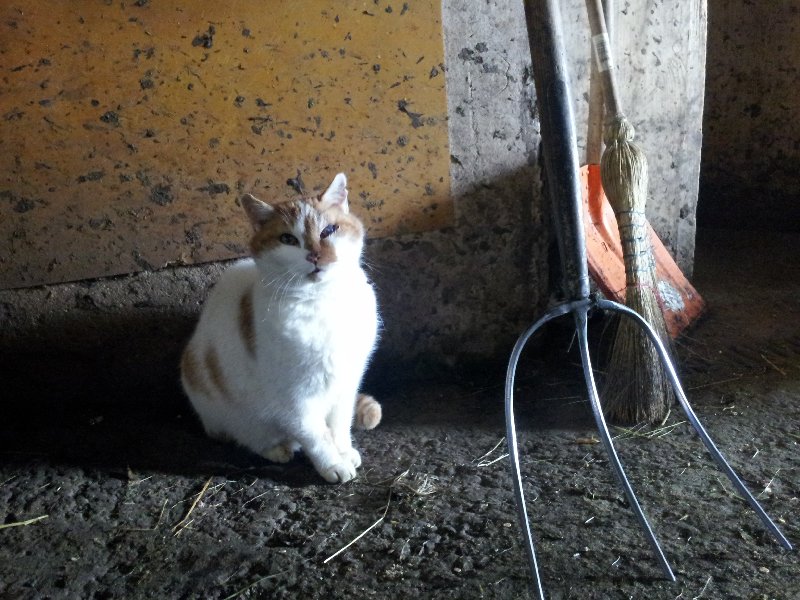 Especially, on rainy, cool and, in May still snowy days, working in the barn is particularly cozy. Milking, mucking out, feeding and cleaning up are fine, but sweeping cobwebs on a shaky ladder off a ten meter high ceiling is quite far down on my list of favorite works. 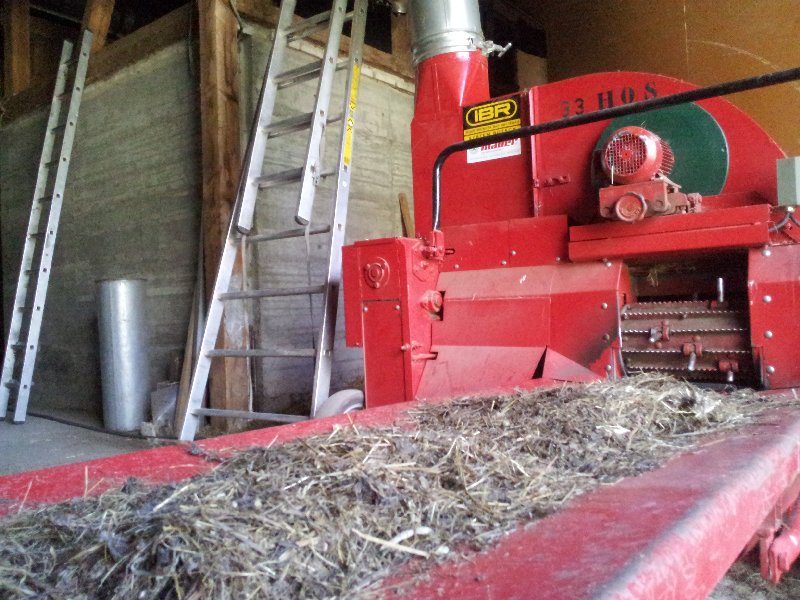 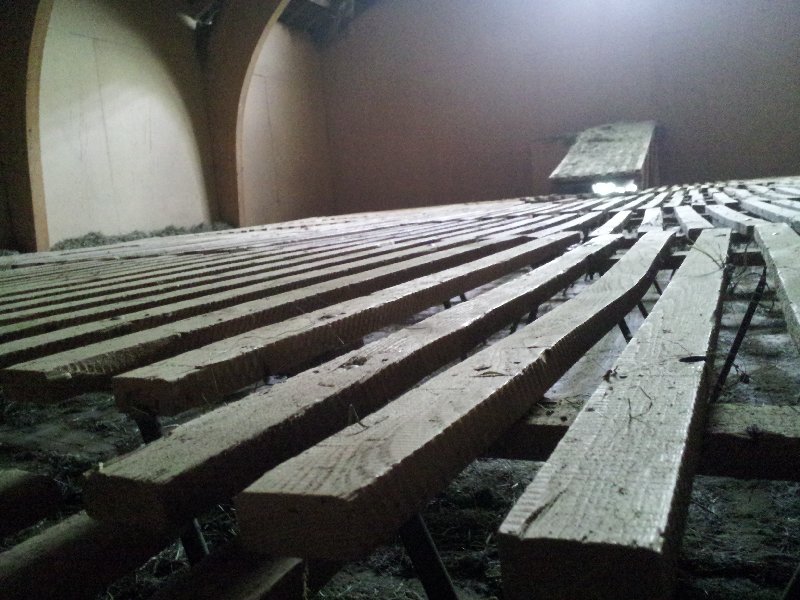 Agriculture in the mountains, in this case, about 1600 meters above sea level is obviously different than agriculture in the lowlands: You need small, stable machines and you can actually only keep livestock. But you have to feed them, too. In summer, cows and cattle are on the pastures, but in winter you need storage, either in the form of moist, heavy grass silage (see photo above left). Shoveling this stuff sooner or later will ruin any wrist joint. Storing grass in the form of hay is also possible. But the mountain weather changes quickly and you cannot afford to let the hay dry outside for too long. Therefore, it must be well ventilated in the barn. The photo above on the right shows the pallets for storing hay, set up in the hayloft, also one of my chores. 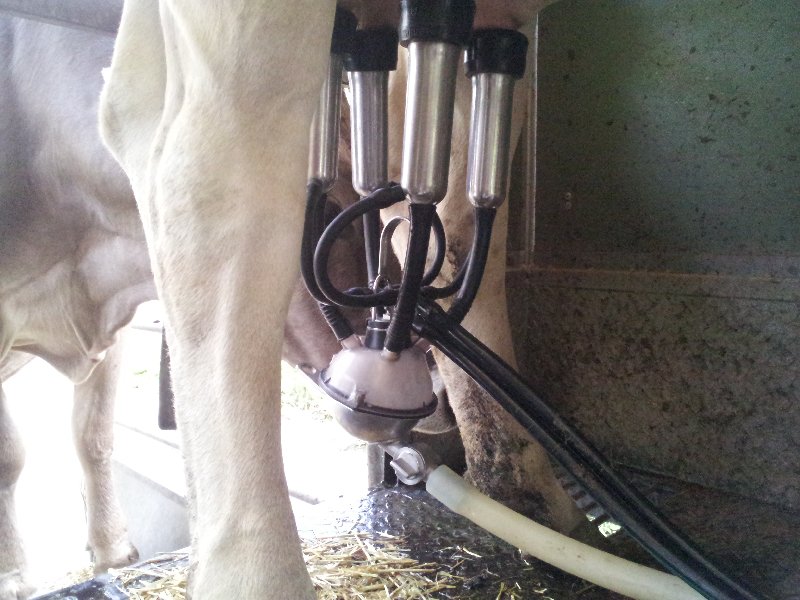 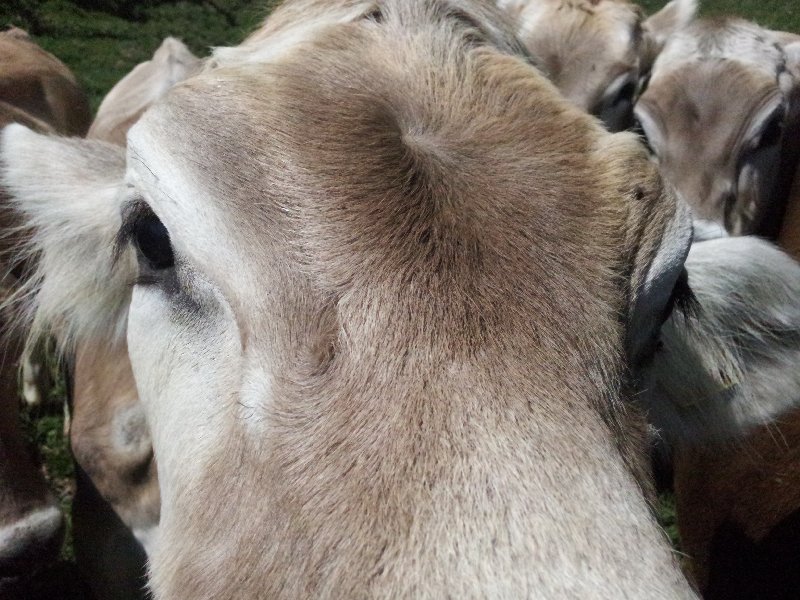 Milking cows – twice a day – is naturally part of almost any mountain job, and, especially in the milking parlor physically not very strenuous. But it is one of those works that can quickly turn into a boring routine. You also have to hurry, because even a cow at some point has to do her business, and in a milking parlor is not much room to dodge. 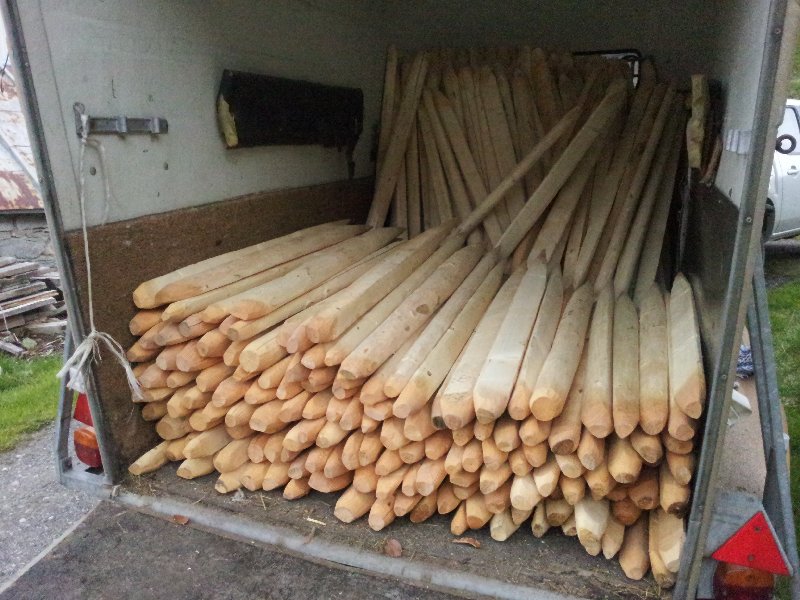 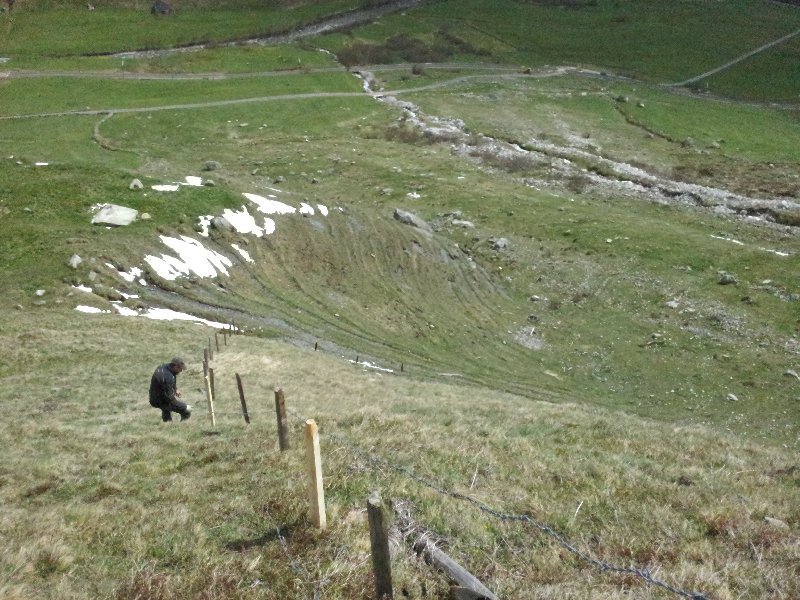 Putting up fences with heavy wooden poles has a long tradition, looks good and is damn tiring. Neither run these posts up the slopes by themselves, nor do they bounce themselves into the ground. So it’s always ten pieces on a rack on my back, plus the big wooden hammer and a whole heap insulators for the electric fence. I admit, it actually is fun to knock the post into the ground – at least as long as shoulders and wrists are still intact. 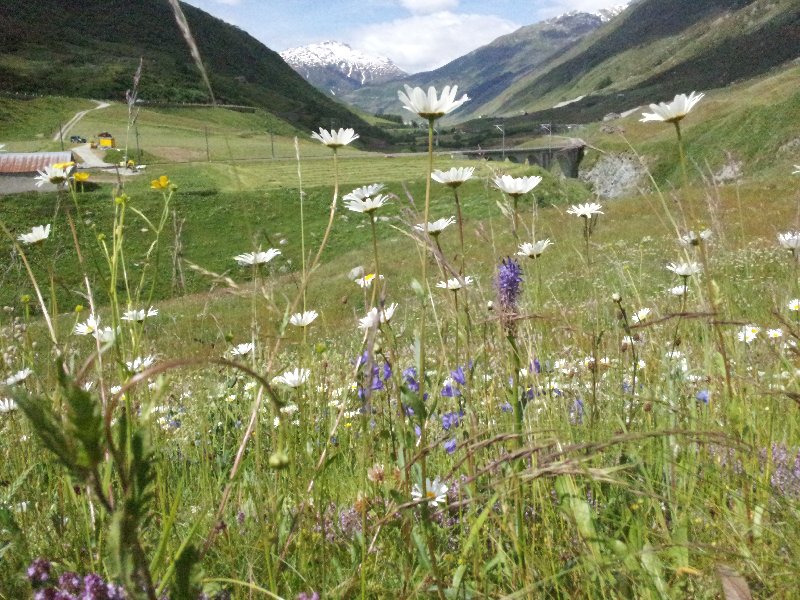 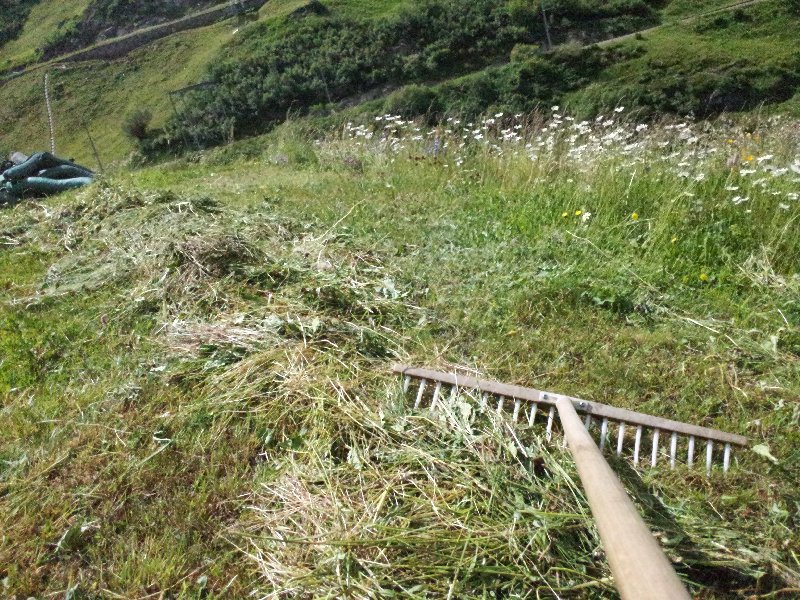 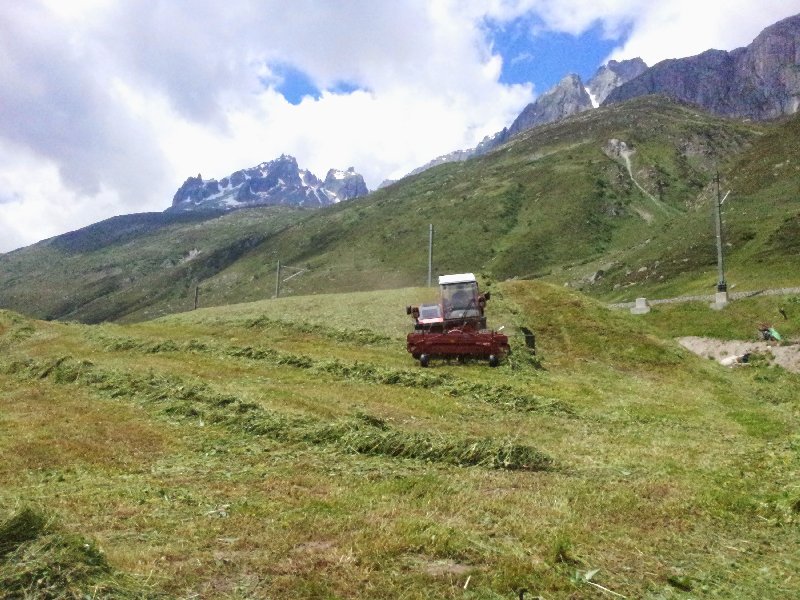 One more thing about the hay: Wherever it is not so steep, the Metrac can mow the grass, but around large rocks, muddy streams and steep slopes you have to mow by hand with a scythe. That really was one of my favorite tasks, after a few days I was able to sharpen the blade so well with the whetstone that the it slipped through the grass like through warm butter. Up in the mountains not a single blade of grass gets wasted. Therefore someone always has to walk after the loading machine with a rake  (usually own family plus neighbors) to pick up the left-over hay. This is also the kind of work that quickly gives the brain cabin fever.

My beloved Swiss Brown always needed an extra invitation for milking, they had to be  counted regularly and supplied with salt. Sometimes a deer ran through the electric fence and interrupted the connection. Then I had to look for the broken spot. What I’m saying is that there was vertical distance to cover, a lot of hiking which I actually enjoyed. What struck me about the cattle in Switzerland is that each cow carries a bell. Standing in the middle of a herd is as loud as being on a construction site. This evoked the following discussion: My boss said:  “The cows like the sound.” I said: “They all suffer from tinnitus.” The dispute was never resolved, but to my satisfaction I later found an article about how bells make cows sick. 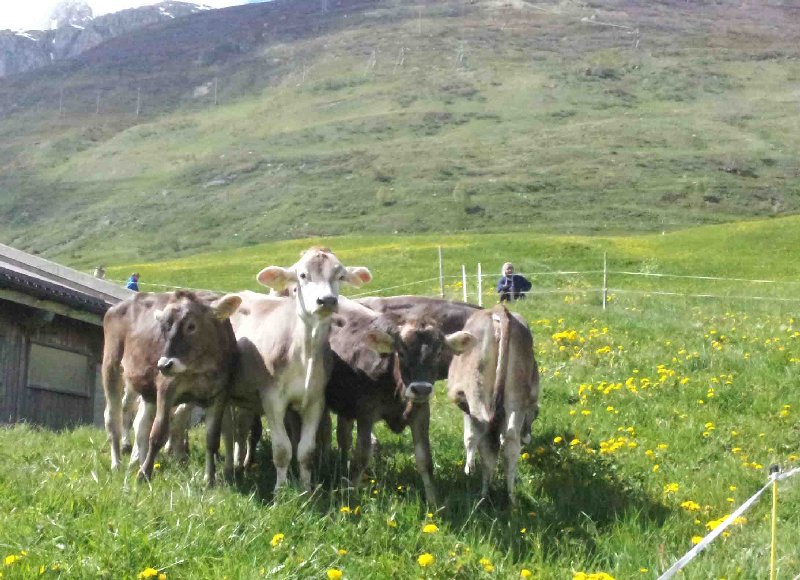 The calves. “How sweet,” you might say, but be warned: Once they have overcome their fear of you, they turn into fighting machines. And that means:  “Welcome to the land of the bruises.” 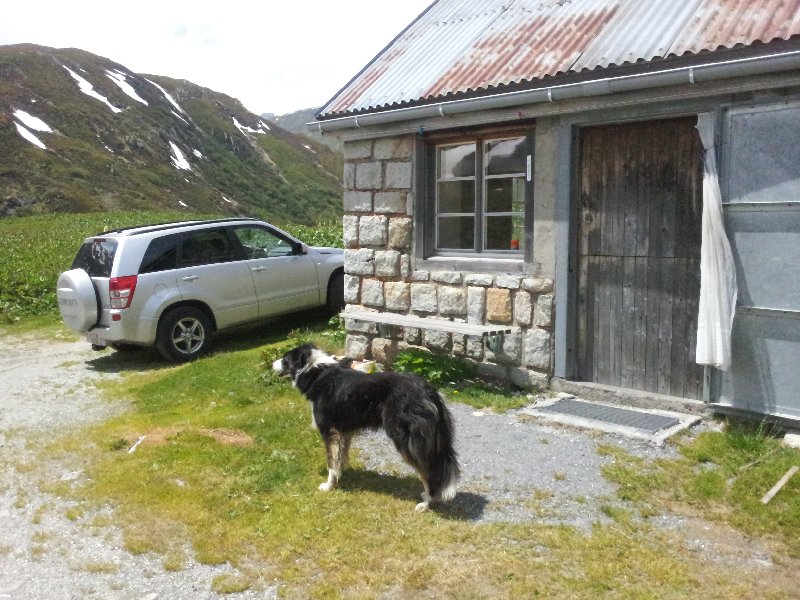 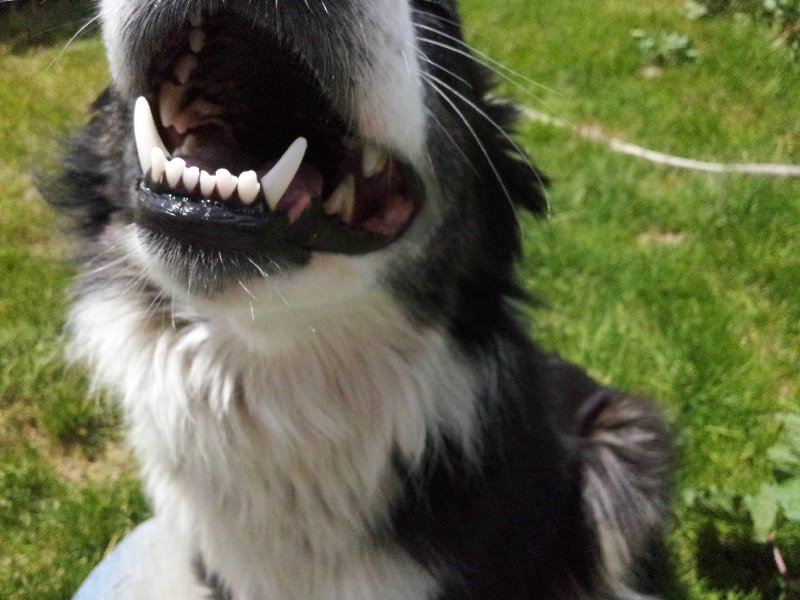 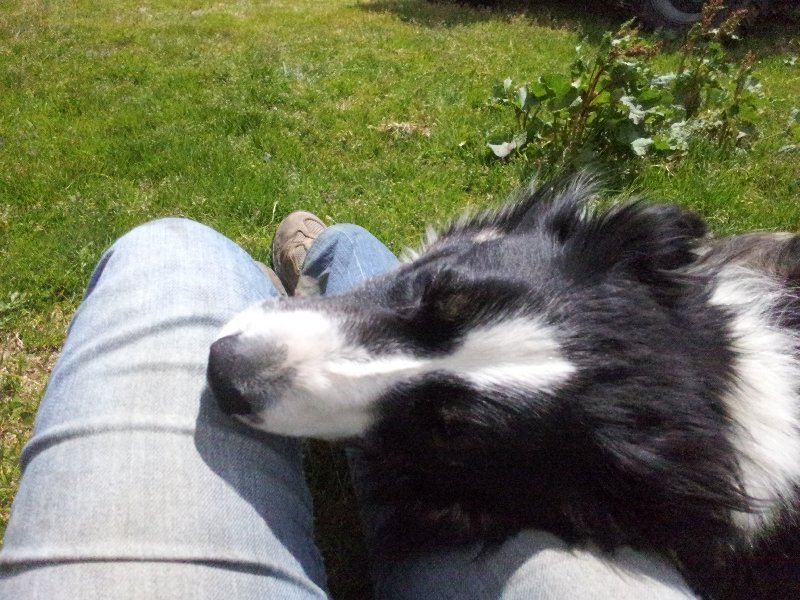 Of all animals I have met up there, I was especially fond of Joey. The smart herding dog is a Border Collie mix and belonged to one of the guys who took care of the high altitude pasture. In  early July we drove the cows up there. Not an easy task as there were about 100 head of cattle and we had to guide them along roads and through villages, all in all great cardio workout. You won’t believe how fast a cow can run… over ten kilometers. 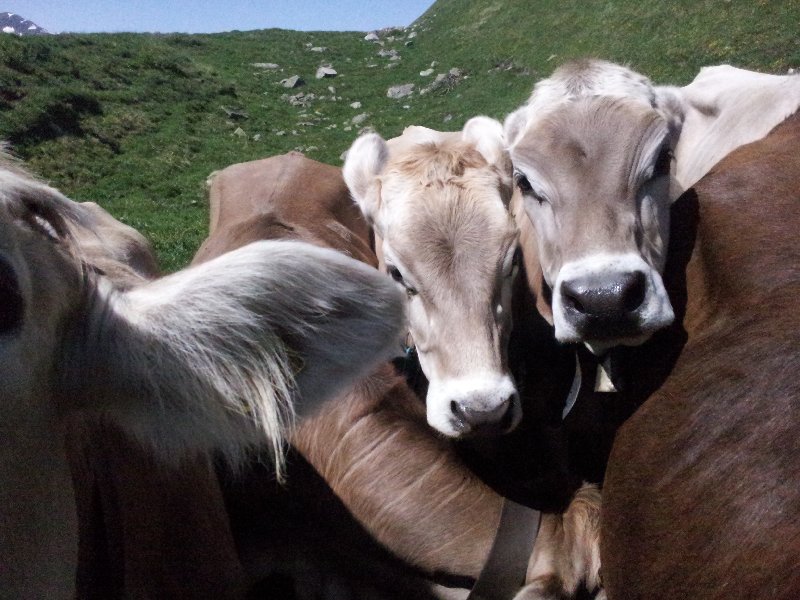 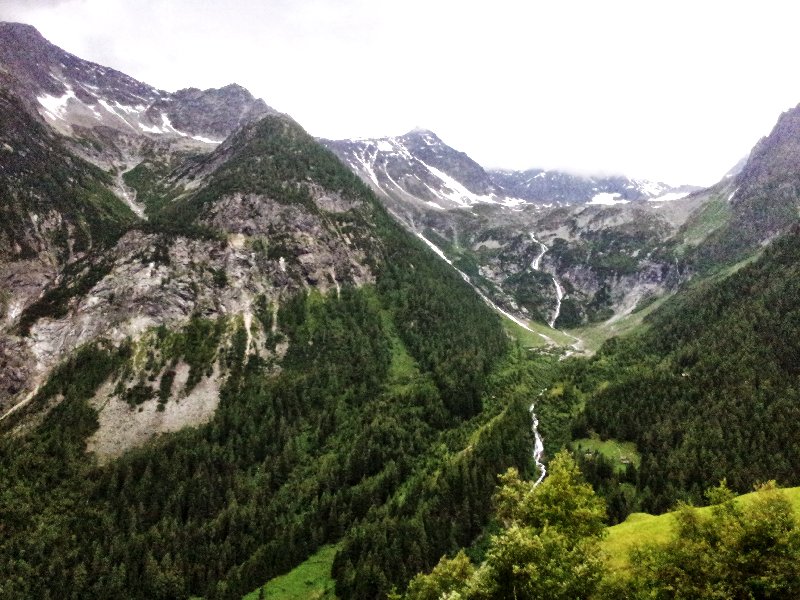 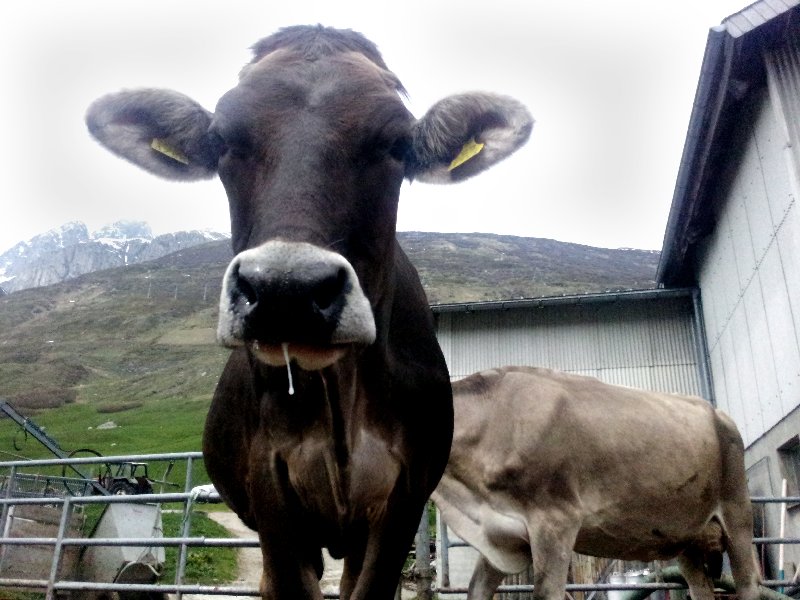 So, as I said: summer in the mountains –  it pays well and you get fresh air and sports. But don’t be naive, because somehow it’s like prison: always the same work, no time for leisure and for your body certainly not a walk in the park. You should ask yourself if you are this type of person and if you are willing to commit for a whole summer. If you want to just get a whiff,  look into Zalp.ch or Almwirtschaft.com in the second half of the season. By then plenty of staff have thrown in the towel and the operators are looking for replacement for the last month or two.