The opponent is a spiral slurry pump by the Swiss manufacturer Stöckli,  six years old and actually a lightweight. Nobody expected any problems and, as long as my boss is around, there are none. In the morning everything runs smoothly: We brought the hoses to the fields and picked up the pump from the neighbors. Now, all equipment is in position to empty the cesspool under the cowshed.

I get some final instructions: switch on the tractor, open the throttle and slowly release the PTO clutch. “All right,” I confirm. The boss leaves to take care of the sprayer on the field. We will stay in contact via cell phone. That would be a relaxed afternoon. “Just sitting around, monitoring the pump”, I think, while leaning back in the tractor seat. At this point the pump is already laughing in its sleeve.

The call comes and I release the clutch. The PTO rotates briefly, then the tractor engine stutters and dies. I try a few more times, always with the same result. I have no choice but to call the boss and report my failure. So I drive to the field and we change places. Of course, after five minutes the slurry runs through the sprayer. When the boss comes back, I ask, how he did it. “With brute force ,” he only says and laughs.

I’m driving back with the jeep. On the road in front of the barn I meet the neighbor who had used the pump before. He rolls down the window and asks, ” Does it work?” – “Now it does,” I reply in Frankonian brevity and drive on. Had I known what’s coming , I’d have asked for more details. Later I would learn that the machine has been difficult already with him.

When I return, I see how the pump is hopping wildly on its metal feet, so hard that it swings to the right behind the tractor. It makes me remember a cue from physics class: “resonance disaster.” The professor spoke about a centrifuge and said: “It can go through the wall.” So, out of respect I keep my distance from the pump and check the throttle lever on the tractor, the rotation number is correct. Again, I call my boss and report back about the new situation. “That ‘s all right,” he says calmly.

” Well, if he says so,” I think and take care of a sewage pipe in which I noticed a crack. Handling duct tape and pocket knife, I ‘m so focused on the leak that I don’t realize what the manure pump is up to. Unobserved and secretly it jumps on a manure hose. I notice it only when the spray fountain shoots up in the air and the yellow broth rains down on me. I can think of nothing other than turning off the pump and step on the hole in the hose. Again, I  call the boss. He is not mad, he seems to know such problems. But he can’t supress a grin, as he walks through the gate. Even the cows on the fence that were observing the scenario carefully, seem to chuckle. Only the slurry pump is standing there quietly, enjoying its victory.

We simply cut the broken piece reconnect the hose. The pump, we tightly tie to the metal fence so that it can no longer hop around. My boss returns to the field and I start the PTO. Surprise! – it works flawlessly. The pump now hops on the spot. The tying has helped, you might think. Well, the pump is not stupid. When it finds that it no longer able to move to the right, it just jumps to the left – towards the fence and the cliff into the dung pit. When I notice it, the rear foot has almost crashed. Again, I turn off the PTO. Again, I call my boss. I should try to push it back, he says and suggests to take an iron bar as lever. The pump makes itself extra heavy and doesn’t move an inch.

I am contemplating the situation for a moment and then I tie the frame on the other side. It’s not necessary to move it, it just mustn’t crash. When I switch the pump back on, it still has too much room. Inch by inch the metal foot moves further to the abyss. Now I ‘ve had it. We want to finish the job today. I will not turn off that lazy slacker anymore. I run to the barn to get more ropes. When I’m done, all solid parts are now tied down and pulled tight. Bound and gagged, the pump is jumping on the spot. “Victory! “, I think and the cows applaud.

But, of course, the  slurry pump has the final word. In protest, it stomps even harder and soon the nuts begin to drop. As if that is not enough, the fender above the PTO breaks and in addition to the jackhammer sound there is the rattling of metal on plastic. The noise makes the cows run away.

But the pump doesn’t have a chance, it must continue work until we ‘re done. When the boss comes back, I’m literally on the ropes, the rear part of the playpen is floating in liquid manure and the PTO shaft is bent. And this is how a Swiss man reacts: He laughs, pats me on the shoulder and says: “You’ve done well.” 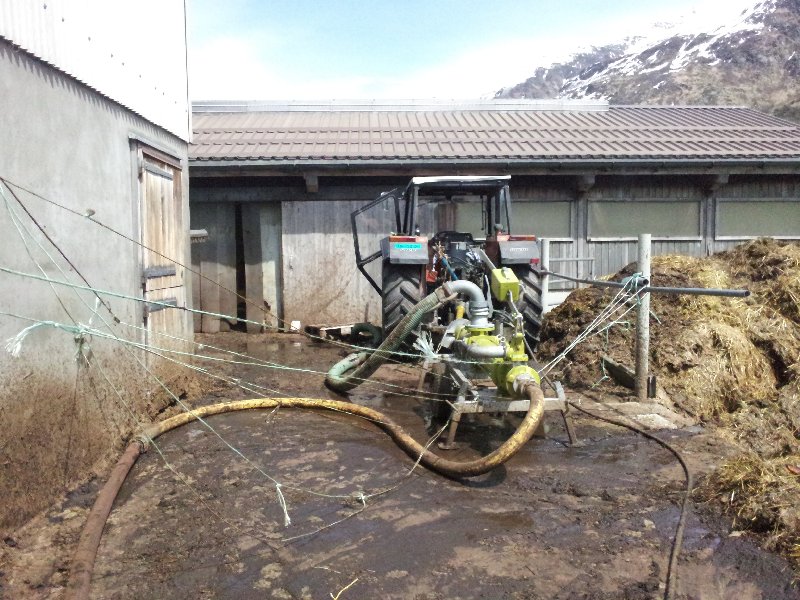