Dirty Dancing on the Love Boat

To a certain extent, the MS (Motor Ship) Isabelle looks like the Pacific Princess, the Love Boat from the TV-series: the measures are similar and both have luxurious amenities with bars, restaurants and spa. The main difference is, the Pacific Princess is cruising in high seas, while the MS Isabelle, under Latvian flag, paces obediently between Riga and Stockholm. “Mini-cruise” the trip is called and only takes about 17 hours overnight. Even during this short time, a lot can happen.

The Love Boat’s plot always starts with the passengers boarding. Had our trip been a television series, it would be like this: Two tired backpackers are standing in the middle of a Russian-speaking tour group at the Riga Check-in counter. Neither tour group members nor backpackers have noticed that you have to pull a number from the machine behind the front door. By the way, this is not a common system in Germany. So the check-in ladies send all the customers back, to draw a number and wait again. The procedure takes a little longer than planned, but in the end, all of them make it on board.

The ship’s hostess shows the two backpackers to their cabin. They cannot believe their luck, when they move into the deluxe cabin on the top deck with outside windows. The Estonian tour operator Tallink & Silja Line, who had invited us, is an excellent host. A jam-packed bowl of fruit is waiting in the cabin and there is BBC News on TV, in fact there is no reason to leave the place until arrival. The MS Isabelle has space for 2,480 passengers in 2,166 cabins and 450 cars on the lower decks. With so many people a lot is going on and in spite of the comfortable accommodation we embark on an exploration.

The Love Boat atmosphere still lacks a love story. Well there is the one, for example, when I was on the verge of falling in love with the sun deck at the ship’s stern. It should rather be called wind deck, but still is my absolute favorite place. Until the bartender wrecks all the romance by educating us about the beer prices: “It’s 5 euros. No, vouchers do not apply here…” We’re a bit spoiled by the Latvian beer prices that are comparable to those in a Franconian country inn. In Sweden we should live to see our big surprise concerning that matter. Some of the Russian-speaking passengers were smarter and towed tons of beer cans in cardboard boxes onto the boat. On deck they stand in Napoleon posture, one hand holding the can underneath the jacket, the other one holding the cigarette.

Unfortunately, the bow area is closed. My friend Melli, anyway, was not thrilled by my suggestion to reenact the famous scene from the Titanic movie. So I’m at the Isabelle’s rear “the king of the world!” – in spirit. I’m standing quietly for a while looking at the sea, whether I might see a tail fluke or octopus arms lifting out of the water. Nil return, the Baltic Sea is not famous for its marine megafauna. 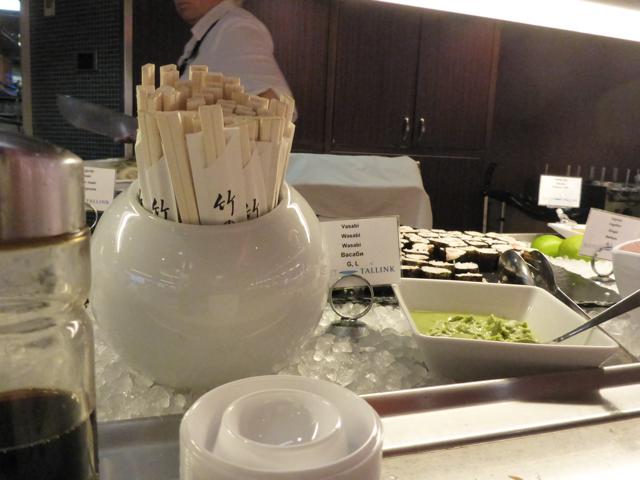 Sushi is part of the buffet on board 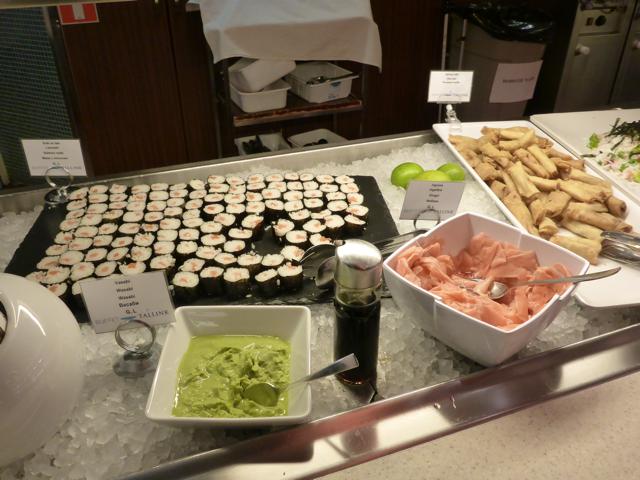 Buffet on Silja Line’s Mini-cruise from Riga to Stockholm

At least I see some sea creatures on the buffet, for example, wrapped in rice as sushi. There are so many different foods that you can impossibly try them all, for example salmon fillet, steak, potato, falafel and even “street food” where you can make your own tortillas. If that is not enough you can still got to the Tapas Bar around the corner. 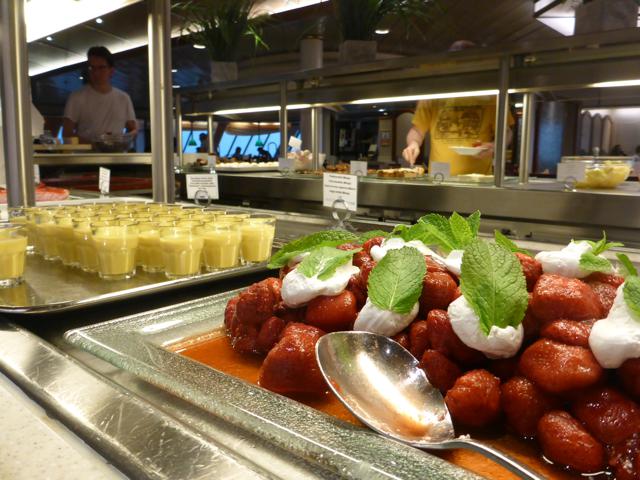 Mango-smoothi and strawberry preserve are part of the dessert buffet

During dinner, you can also keep an eye out for whale fins, through the many picture windows around the restaurant. Mostly, however, there is just other shipps chugging past. The Gulf of Riga is relatively quiet at night. When we reach the actual Baltic Sea, everything begins to rock. Later, I would fall asleep with hands clamped to the bedframe, a good dose of Vomex in my stomach. This is a drug for nausea, which I took on the trip in wise foresight. 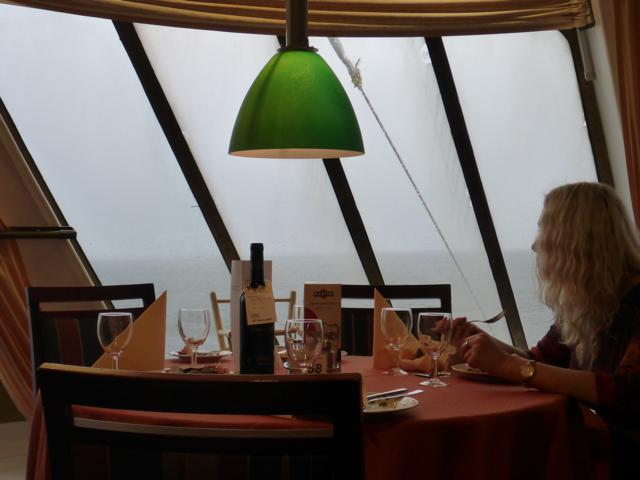 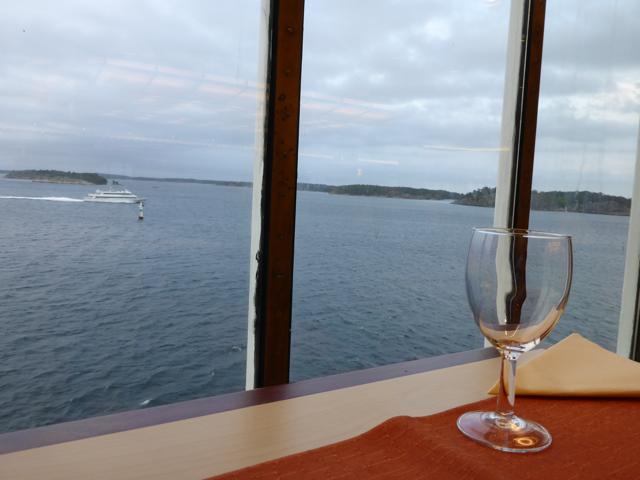 Looking at the Swedish archipelago from the ship’s restaurant

After dinner we take a walk on the Party Deck and to the shopping area. The conversation, as we enter the duty-free store: Melli: “I will spray perfume samples now.” Me: “You’ll find me in the Lego toy section.” Unfortunately, we missed the ship’s lottery. Until about 8 pm you could have bought a ticket. They made the announcement several times. We have no idea what we could have won. In Bingo first price was, I believe, 3,000 euros, but we also missed it. 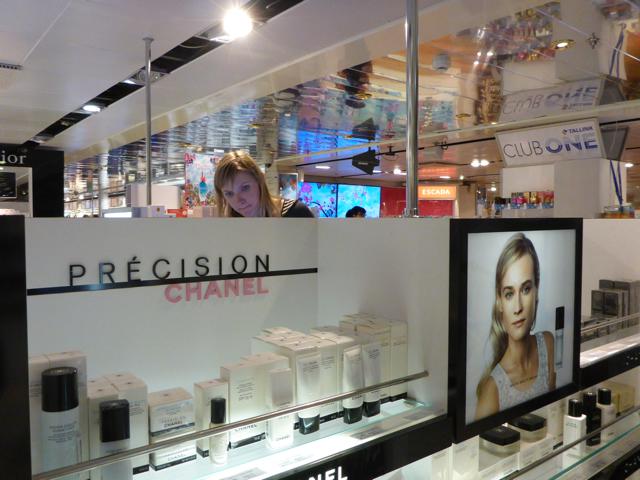 Instead, we did what any reasonable person would have done: we drank beer. The pub had a huge flatscreen TV that showed football and ice hockey games, across the room a tatooed troubadour with acoustic guitar sang rock classics like “Knocking on Heaven’s Door“, “Sweet Home Alabama” or just anything the guests wished for. The bartender also had plenty of tatoos. When business was quiet we chatted a bit. Two weeks in a row he has been working on the ship, then he has two weeks off. In his spare time he enjoys skiing in the Alps or goes surfing in Portugal. Cool guy. 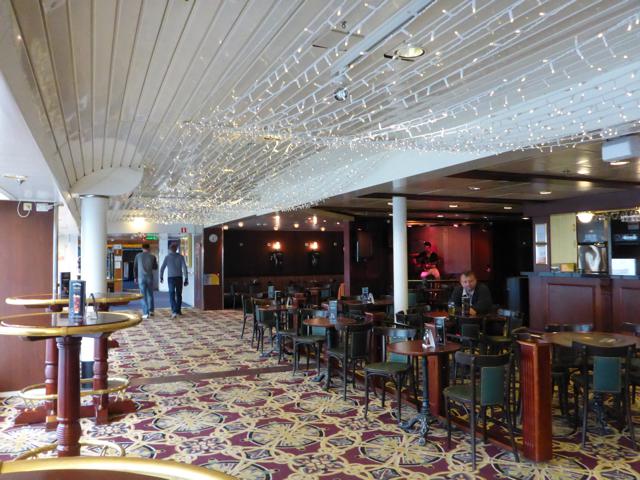 Bar with troubadour and flatscreen 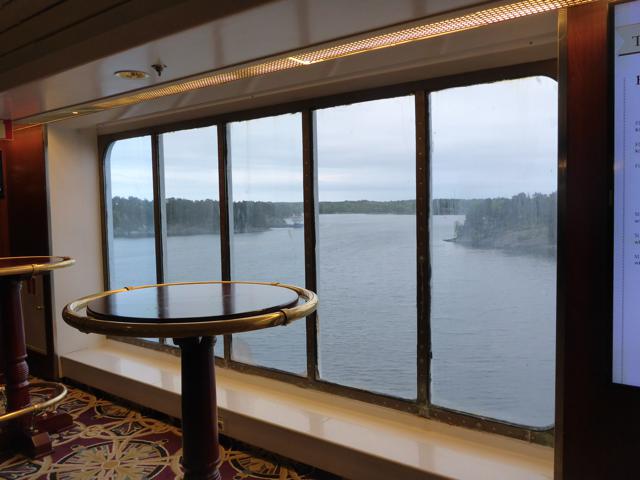 View on the Swedisch archipelago from the bar windows

Back in my early 20s, I had stayed up late and attempted a flirt with either the musician or the bartender. Perhaps it could have ended in a one-night stand in one of the staff cabins. But the old wolf is turning gray, wonders “what for?” and prefers to sleep. Later, we move on to the Skybar. There is a band playing and the occaisonal show program with professional dancers. Do you remember the plot of “Dirty Dancing”? Certainly, but here is a refresher: The film takes place in 1963. A girl named “Baby” is spending her summer vacation with her parents at a holiday resort. There a dance group entertaining the guests, giving them group dancing lessons and animating them to dance to the band’s good-time music. Well, that’s similar to what’s happening on the Isabelle, although none of the male dancers nearly looks like the young Patrick Swayze, the girls are all the more handsome. I have taken pictures, videos as well, but everything got lost on mysterious ways in Riga. This is me improvising: The following scene from the movie illustrates the Dirty Dancing experience on the ship quite well.

At some point the resort atmosphere gets too much for me. I’m leaving for the wind deck where I have my hair blown around my head. Due to the stormy weather no one else is there. Almost no one, because on the other side of the railing is a tall man in uniform, looking down on the water with a walkie-talkie in his hand. “Curiosity kills the cat – knowing brings it back.” Of course, I go and ask what he’s doing. He’s watching the waves, he says. “Is there going to be bad weather tonight?” – “No, it won’t be too bad.” The waves are only a few meters high, the worst he had ever seen, were six meters tall. The guy is large and has a cabinet-like stature, attractive in a way. First I think, he is part of the security crew. His name tag reads that he is the ship’s doctor – “just like on the love boat, only younger,” I think. Now a flirt opportunity is opening, but none of us can think of a meaningful conversation topic. We stutter around a bit, give up and say goodbyes. 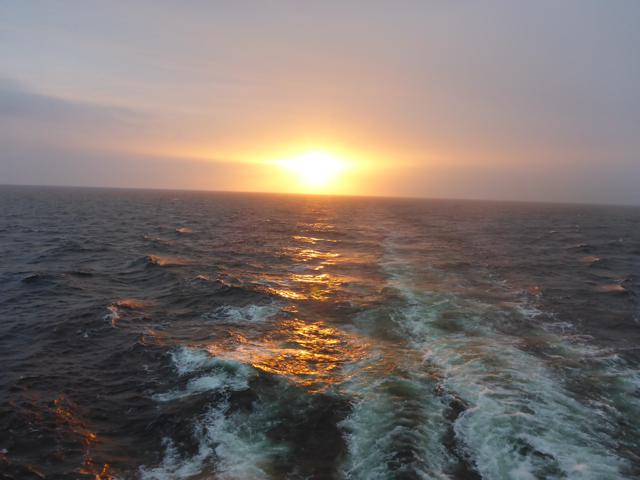 Sunset on the way back to Riga 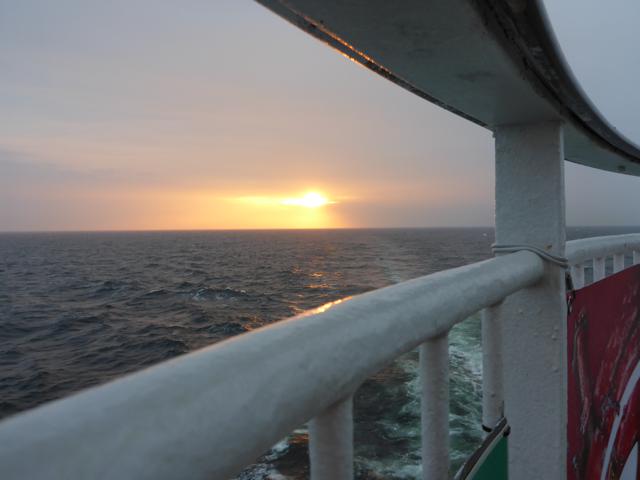 Sunset on the Baltic Sea 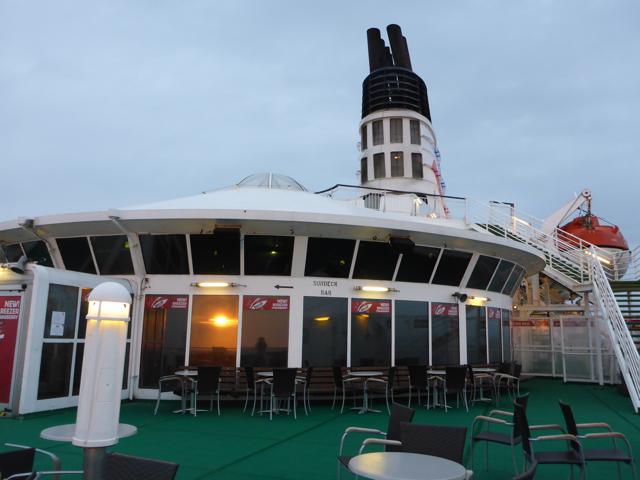 Had I met the doctor an hour later, we’d have had a great conversation topic: my stomach. Even with three meter waves, the big ship is rocking slightly, making me feel dull. Actually, I find rough seas quite entertaining. Already for a long time I have been wishing for a real storm. Then it’s like a ride in the amusement park. See, for example, this cruise ship off New Zealand:

This doesn’t happen, for the Baltic Sea is not wild enough. The show goes on, even at midnight the entertainers are dancing. Later, the party crowd moves on to the Club Heaven with electro-DJ. We do not, we finally go to bed . 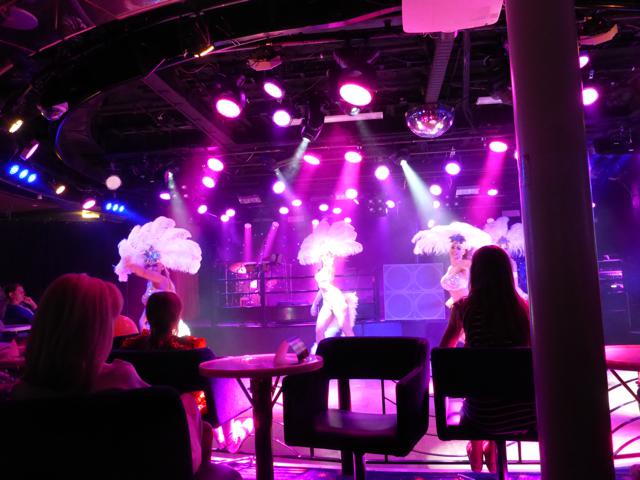 The party crowd probably sleeps through the next morning and misses the beautiful view as the Isabelle is gently pushing past the idyllic archipelago islands. Both of us are fit and rested for our City Safari in Stockholm.

Here’s my travel tipp: Had I done this trip in my early 20s, I would fly to Stockholm, go on aboard the Isabelle at Frihammen Harbour, be happy about the relatively low beer prices of 5 euros, because in Sweden a beer costs 8 euros. I’d leave on a Thursday or Friday night and would enjoy a great, inexpensive party weekend in Riga (unless you like it quiet, then you better go during the week). On Sunday, I would return to Stockholm by boat, adding one more party night. In Sweden, I’d cure the hangover of the century with cheaper tab water.