Back in the year 2002, dear kids, there were no blogs, at least not to the same excess as now. There were special cafes, where you could access the internet, not via smartphone or wifi but with a computer that was installed there. Back in 2002, I had a diary made ​​of paper, in which I wrote using a pen. Recently, his diary once again got into my hands. I was 19, Australia was my first big trip. It’s about time to digitize my first Travel Log. Here are some excerpts:

It’s raining, European weather. Because of the time difference, I lost the whole Monday. I’m sitting with a few Brits in the hostel bar. The jetlag is bugging me a lot. Anyway, I’m collecting first impressions. I just now developed a taste for pool. There is a strange rule called “lost by seven”: When someone loses the game without pocketing a single ball, he has to run around the table with his pants down. It’s my first night in the country and this happens twice. While we watch the spectacle from the bar, the British work hard on expanding my knowledge. They say, many of the names of German football players sound like British swear words, for example “Janker” like “wanker”  or “Kuntz” like “cunts”. This is also the reason why all German players in the music video Three Lions wear the Kuntz-jersey. There is another saying they teach me: “Two World Wars and One World Cup, the British f ** ked the Germans up”. Just making fun, of course. 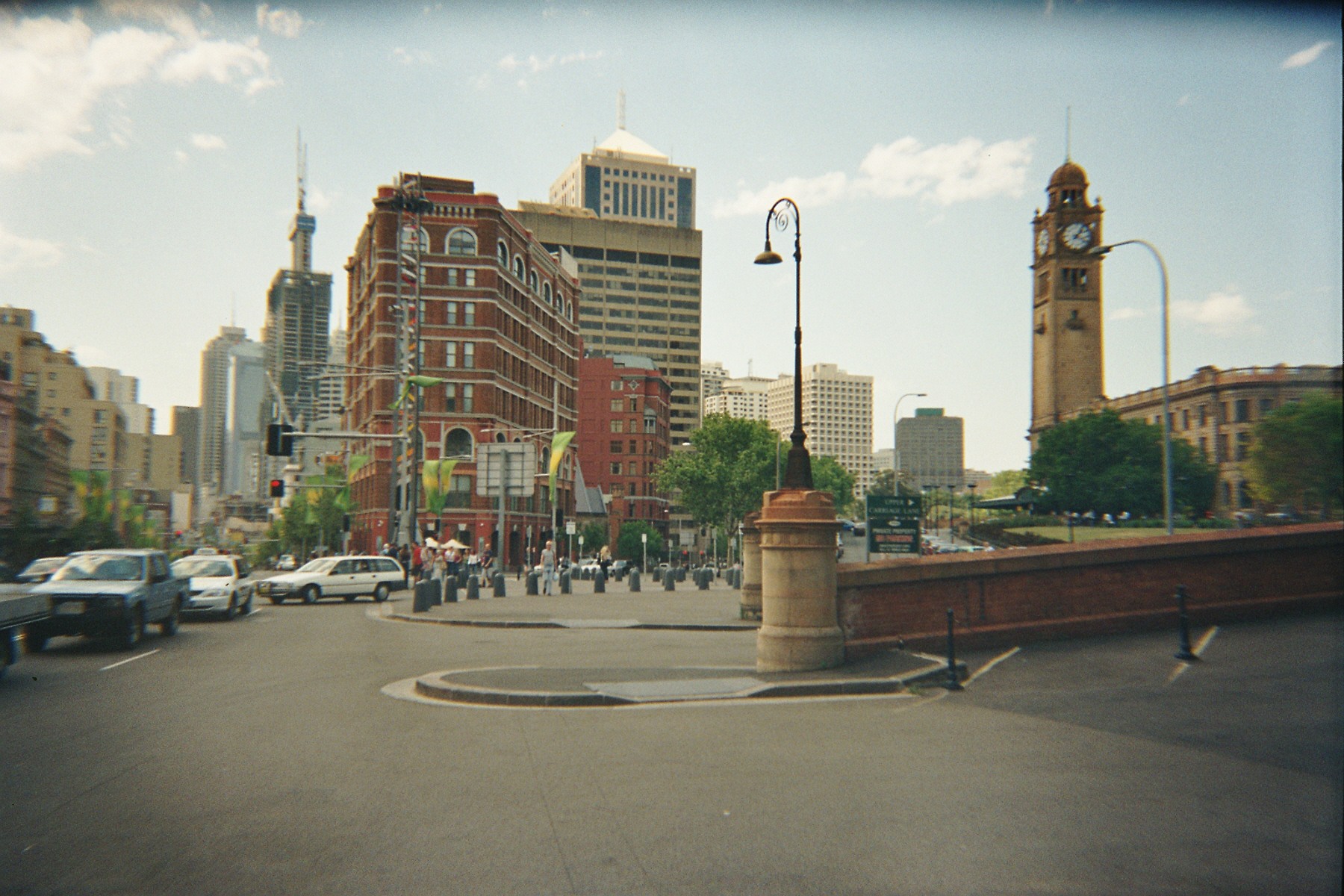 I just moved into a shared flat at Warners Avenue, Bondi Beach. My roommates are Israelis, all eight of them. They are a few years older than me, in their early 20s. They just finished their military service and now need some time to digest it, they say. As far as I can tell on the first day, all of them are ok. Right now, I’m unpacking my suitcase, I’m really tired. Am I ever going to get over this dam jetlag?! Well, it could also be a hangover. I have blisters on my feet, most certainly I will never again walk barefoot through downtown Sydney, especially not in the winter. By the way, I’m the proud owner of a brand new RSA (Responsible Service of Alcohol) – and RCG (Responsible Conduct of Gambling) -Certificate You need this around here to get work in the hospitality industry. What I learned in the course: Australians are either alcoholics or addicted to gambling. In the big casinos, they need to change the carpets regularly, because people forget to go to the bathroom out of sheer addiction. 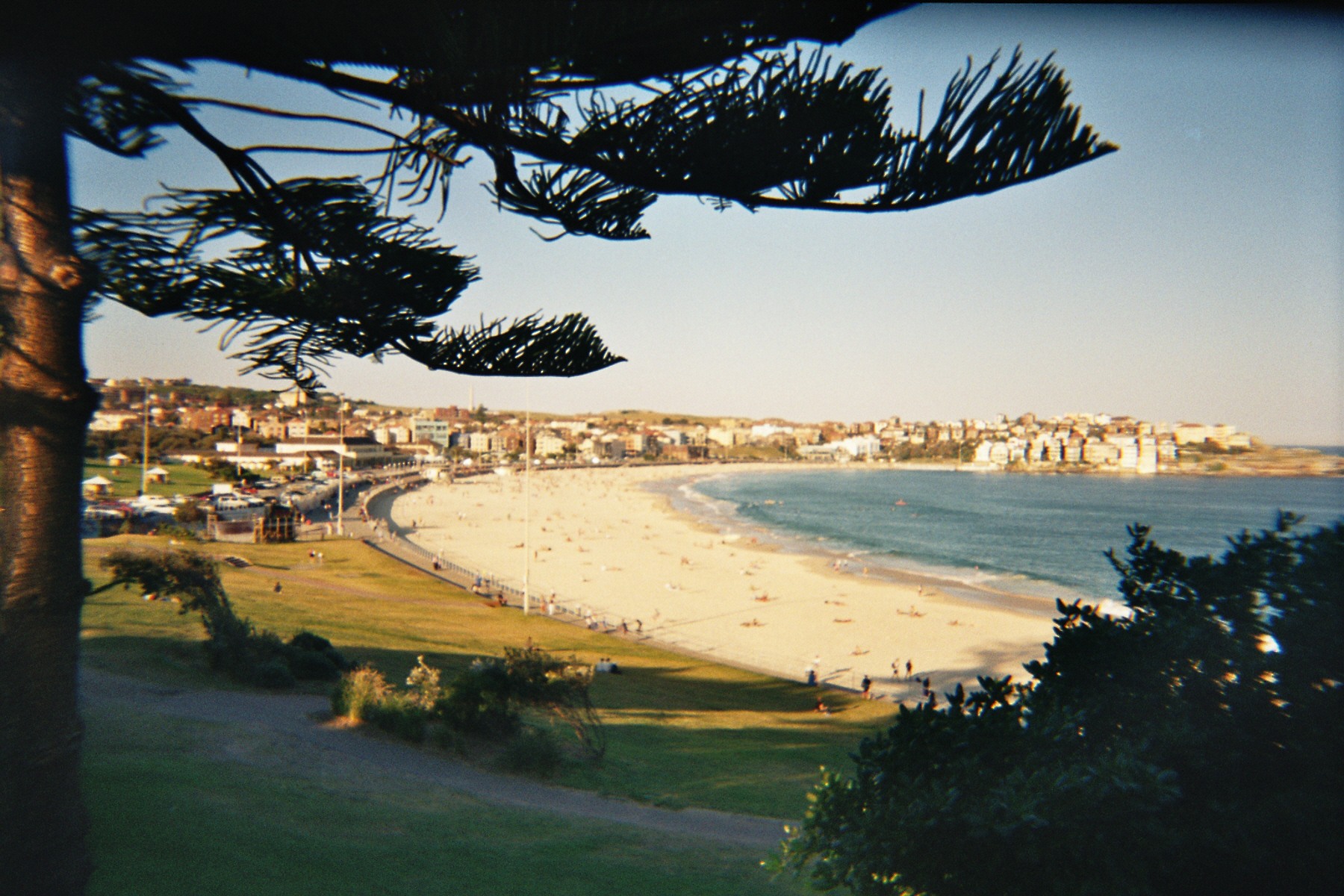 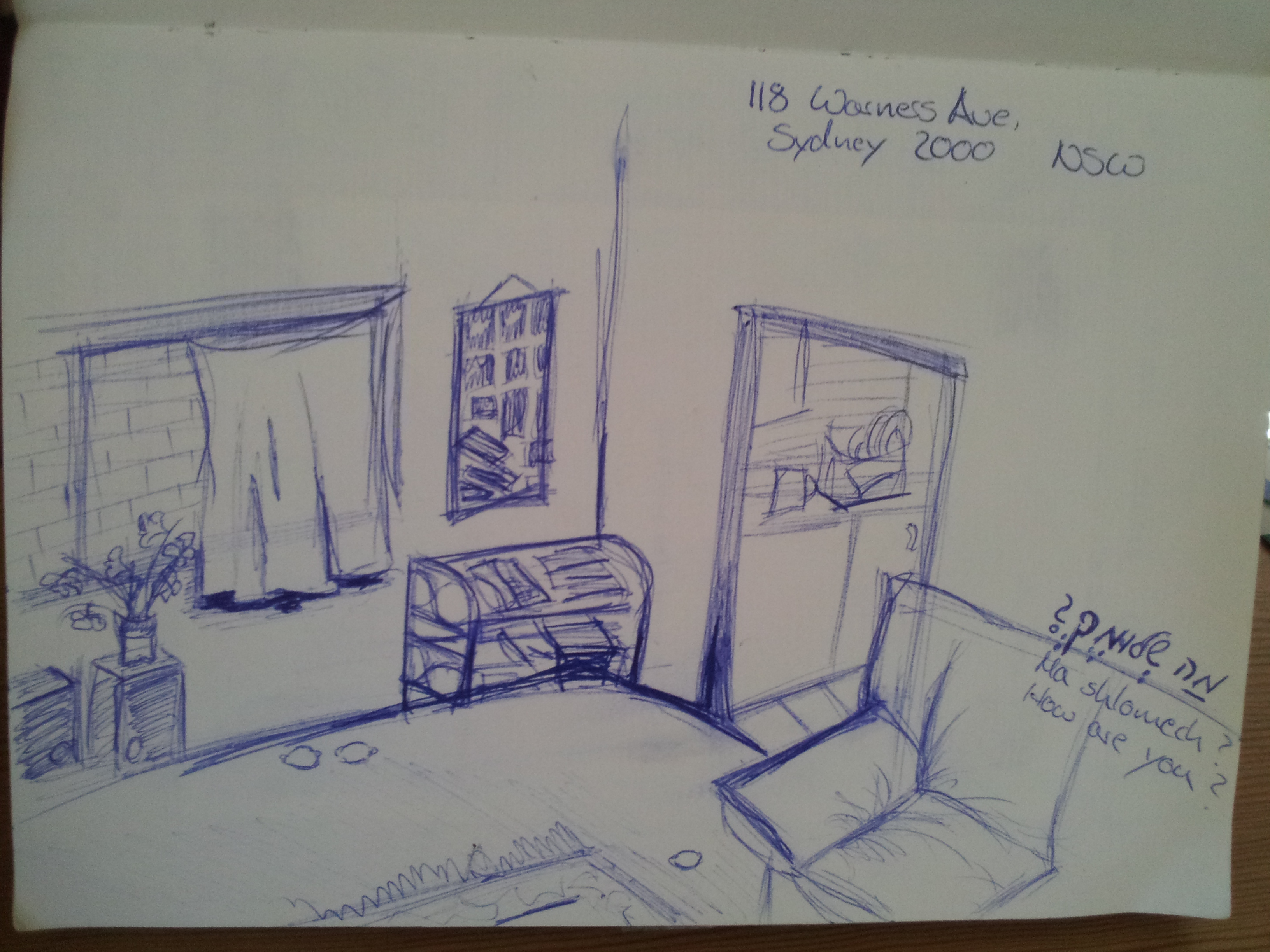 We had to move. Our mattresses were infested with bed bugs and the house needs to be fumigated. Now we live in Roscoe Street. This apartment is much better than the old one. I like my roommates, especially Asaf and Keren. The two Israelis are a couple and fit together really well. Both are handsome, have a great sense of humor and for only 23 years of age, already have a lot experience of life. They constantly teach me new things, for example, cooking, juggling, Hebrew or how to fight with a knife. I get along with most of the roommates, except for Glenn. He is Australian, 35 (very old from my perspective), tall, thin and kinda funny (but not like ha ha!). At that age you shouldn’t have a  traveler’s life anymore (sic!). Glenn is definitely not on my wavelength, he doesn’t speak coherent, probably too much smoking weed already. Usually, I avoid him. However, I have to sleep with him and John, the Canadian in the same room. They are performing a snoring concert each night. Apart from that, everything is alright. 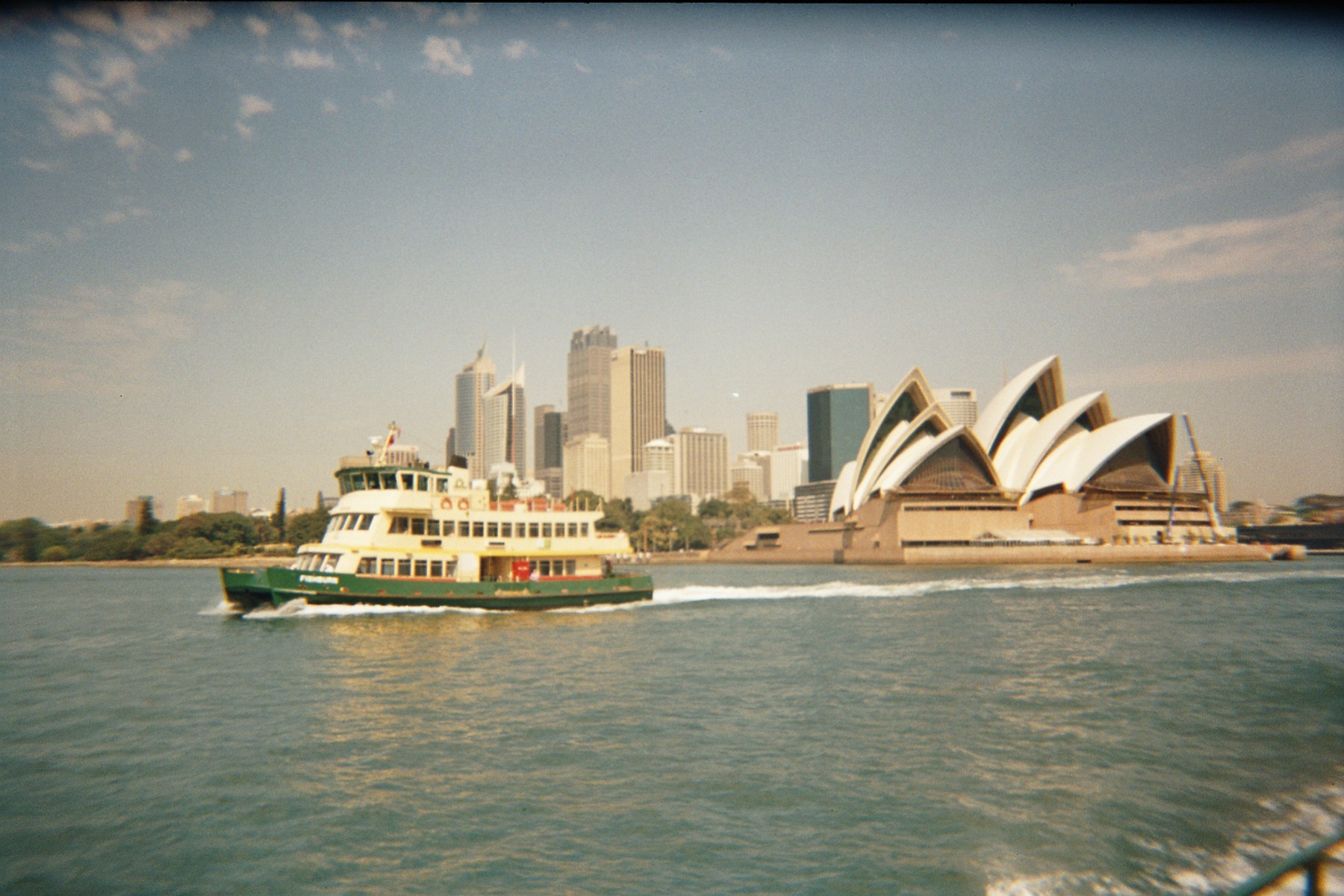 Recently, I got a part time job in an Italian restaurant, which is run by two Lebanese guys. There I work at the same time as waitress and as dishwasher. The bosses always sit in the kitchen and smoke hookah. There, between dishes and vegetables, lives a cockatoo named Yellow Shit. I know where that name is coming from, because the other day I had a whole bunch of it on my backpack. 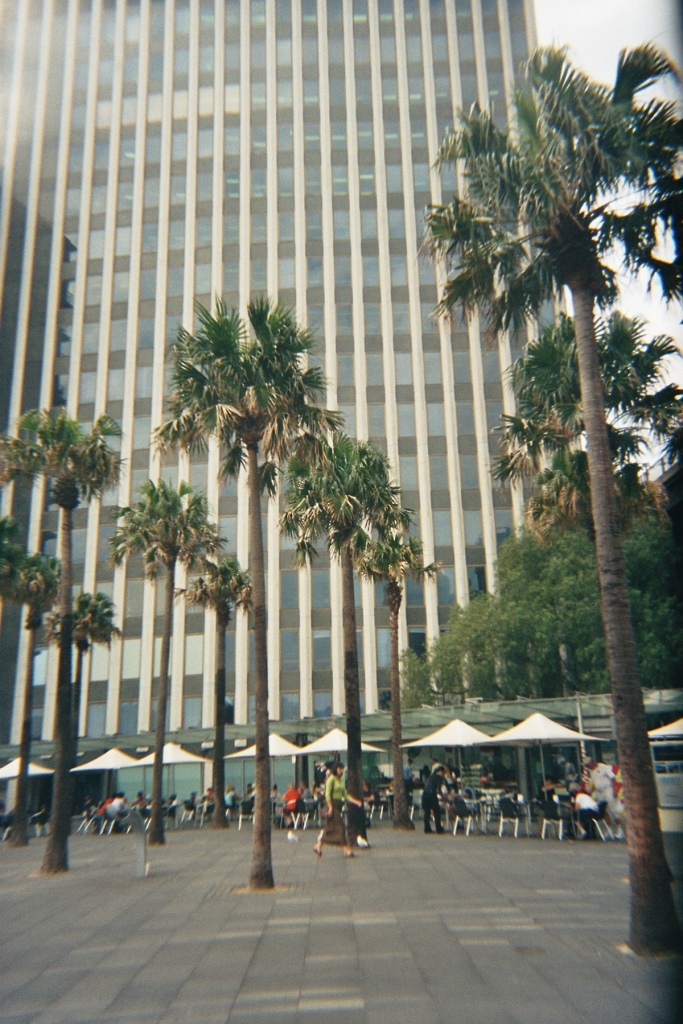 Addendum: I quit this job after a few weeks and started a new one in a sandwich bar in the business district. There, I got fired. Among other things, I toasted my own hand, ruined the coffee maker and served the schnitzel half raw (no one told me that you need to thaw them before frying!) Fortunately, I had my RSA and RCG certificate. This got me a job in Silver Service at Pinnacle People (Australia’s Largest & only National Hospitality Staffing & Recruitment Partner). These jobs were awesome and easy: catering Food & Wine for big events in 5–star hotels or at the Aries Music Awards. There I was in the same room with Kylie Minogue and Kelly Osbourne. Unfortunately, these jobs were not regular enough, they alone will not make ends meet. Far too often I had to fall back on my savings. 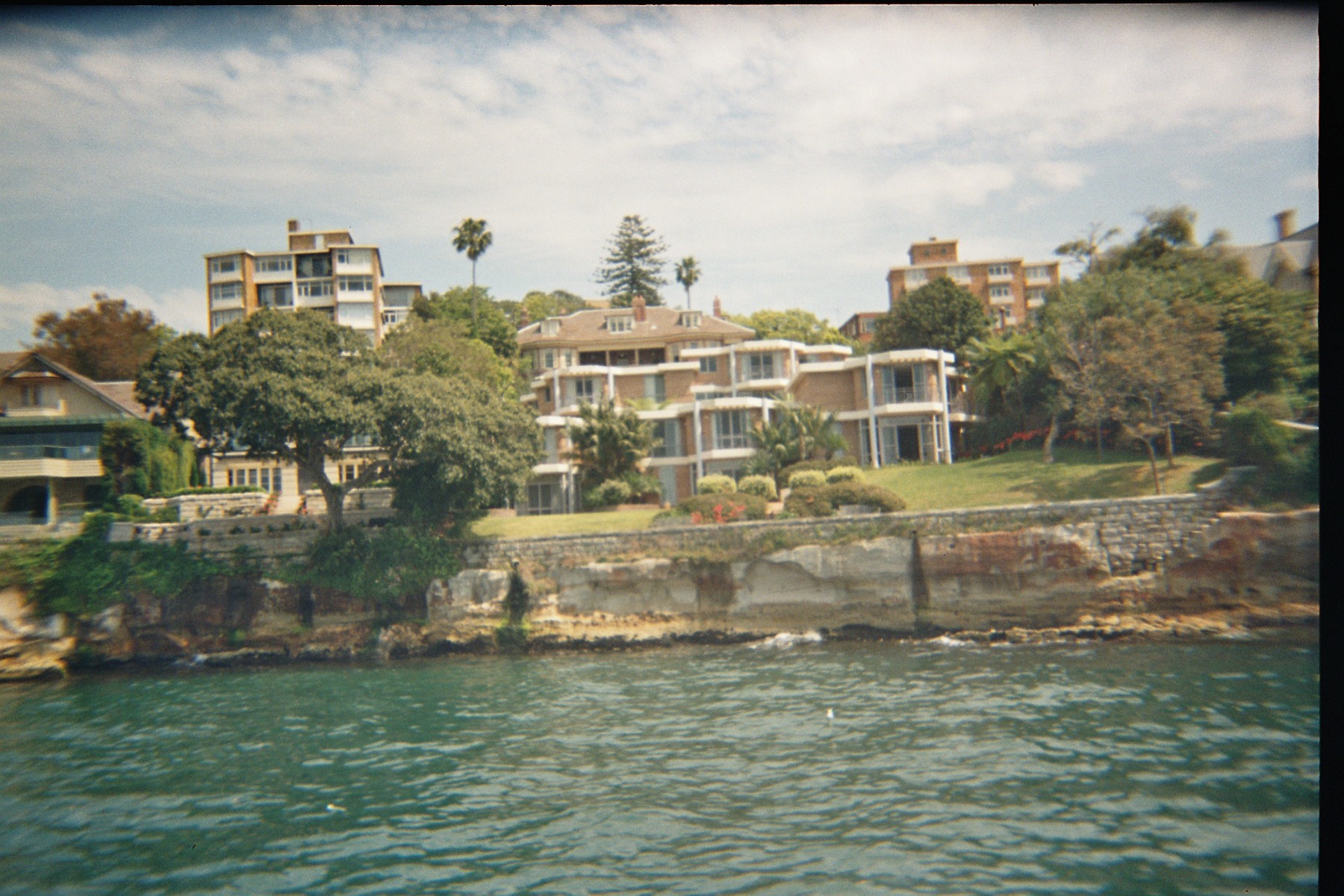 Somewhere at the shore, Sydney 2002

There is still a little time before the boarding starts. I cannot remember if I’ve ever flown with a 747. At the suite, where I‘m sitting, a piano concert begins. I leave the room. For lunch I eat Hokkien Noodles, which are delicious. I shouldn’t have started smoking, but at least I lost about five kilos. Oh, I‘m not flying back home, just to Thailand. There, I will meet with Keren and Asaf. On the way back home to Isreal they are stopping over for a few weeks. They have already been there and always raved about it when we were living together. When they asked if I want to join them, I didn’t think twice. But only for a little while. Australia, I’ll be back!