… was the motto of the climbing festival MOVE which I got invited to by the Val Gardena Tourism Organization last weekend. For me right now, the Dolomites feel like sore muscles, the result of an adventurous presstour with via ferrata as well asalpine rock climbing and hiking tours.

As contrast to the packed outdoor program we are  in a 4-star hotel, the only one in the area of more than 2000 meters above sea level. The Passo Sella Dolomiti Mountain Resort just opened this July, is conveniently situated next to a gondola station (skiing area!). The hotel, besides the cozy, woodsy flair, offers even spa and indoor swimming pool.

“We wanted to create something beautiful that so far has not existed around here,” said the landlady, Sonja Perathoner. Who the target audience might be, I ask her, because outdoor and luxury were located in different drawers in my head so far. “For us, everyone is welcome,” says Sonja, who admits that there are also a few challenges that no one has considered in advance. For example, a drying room at the entrance area is missing. “We’ll have to come up with a solution. Today again somebody had walked with muddy shoes through the stairwell,” she told me. I’m blushing because I know who it was. 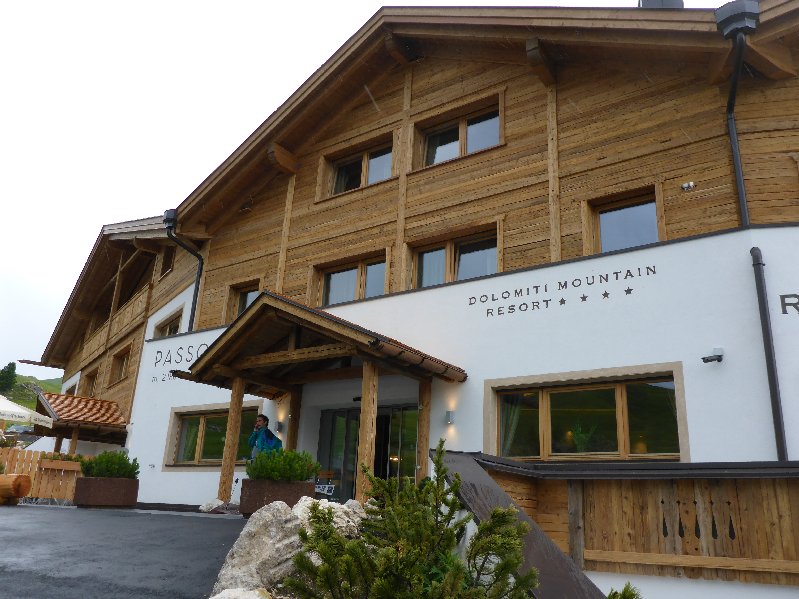 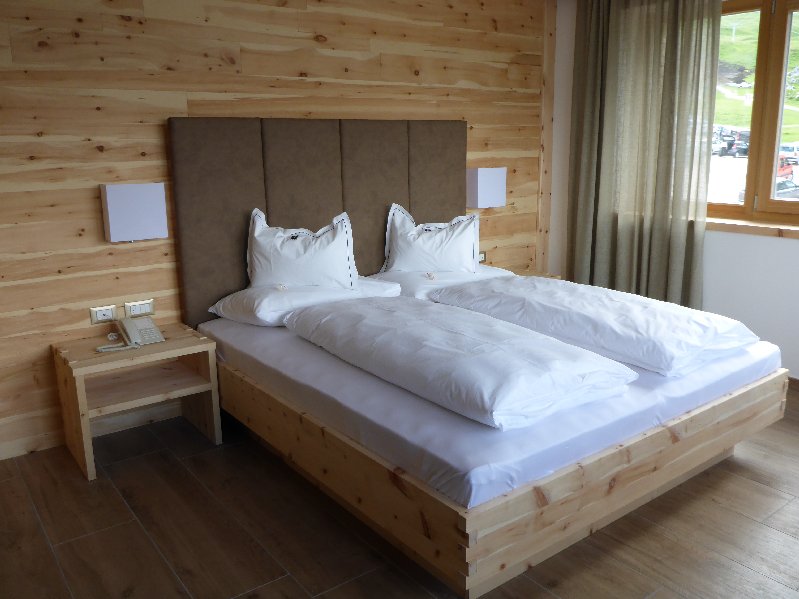 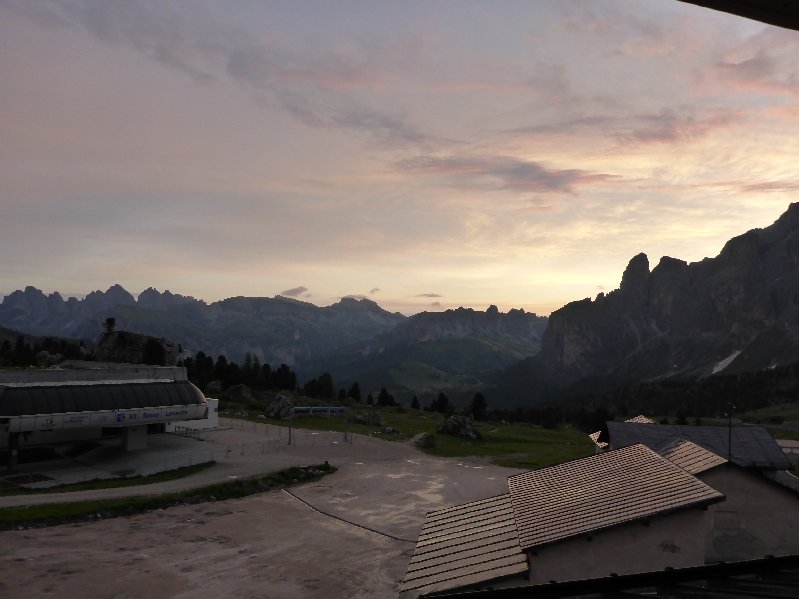 Since I personally prefer to engage in budget travel, 80-260 euros per night, depending on season and room, are too expensive for me. But those who have the wherewithal and want to enjoy high mountain luxury, instead of sitting dirty in their tent or listening to the snoring sonnet in a hut’s sleeping camp, this resort would be quite enjoyable, mainly because of the impressive mountain panorama, which you cannot escape in a single room, not even in the pool. In the early morning you often see guests standing at the window with their cameras, capturing the mountain silhouette during sunrise.

A tip for the budget traveler: In a separate part of the hotel, there is a spartan dormitory for around 20 euros per night, but without access to the spa and without the great view of the Alps. 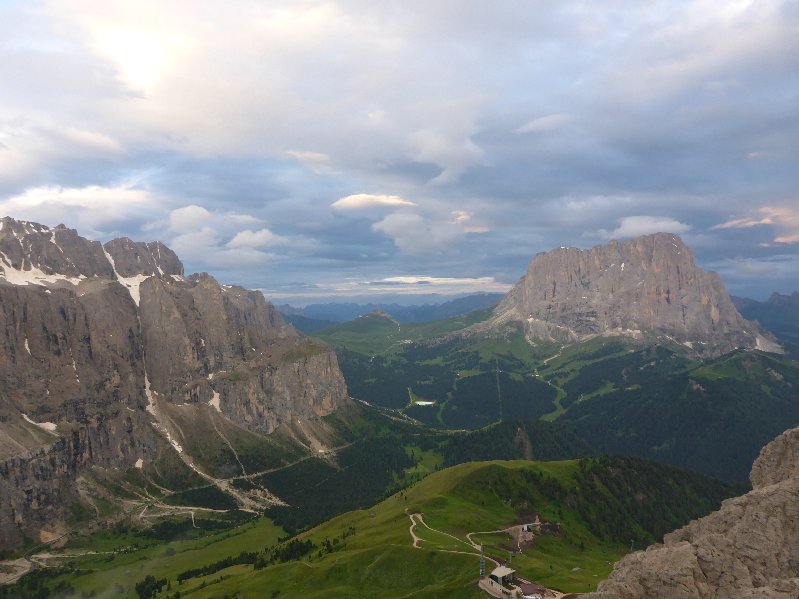 Let’s talk about the Val Gardena now, or as the locals call it Gherdëina (pronounced Grda-ina) in Ladin. The region is located in Southern Tyrol which officially belongs to Italy. Locals speak all three languages ​​fluently and feel neither as Italians nor as Austrians. 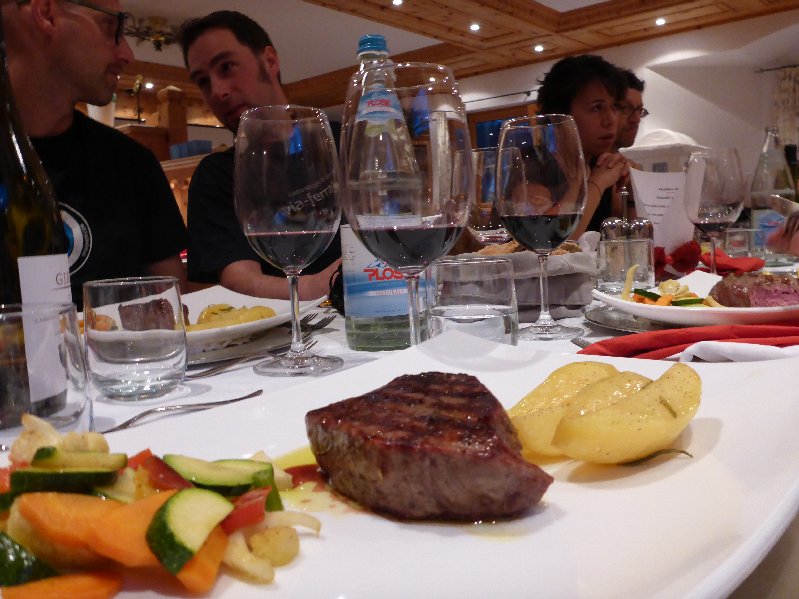 Friday evening at the reception, there is time to get to know other participants over an aperitif. Before we move on to the several-course-dinner, with steak and red wine, the local mountain guide Hermann Comploj shows videos of his kamikaze missions, like the one below, in which he descends with skis 350 vertical meters at a 54 degree slope. “And why do you do these things?” asks an Italian journalist who works for a women’s magazine. “To find out if you can,” Hermann smiles.

I also ask myself the next day, whether I can. Because I don’t know if I can do the Stevia climbing route with the advanced group or if I should join the beginners in the crag. Unfortunately, I had not touched rock a single time this year. Fortunately, Ralf from the online portal via-ferrata.de was part of the team. With more than ten years of experience, he is a walking mountain encyclopedia. He says, “Well, if you’ve made the Rino Pisetta, then Stevia is a kindergarten.” And I’m glad I went with them because the tour was just awesome.

The Stevia fixed rope route (aka Via Ferrata Sandro Pertini) is a pleasant climb with a few challenging spots and a stunning view of the Vallelunga. And when do you get the chance to climb a via ferrata together with its builder, in this case the local mountain guide Mauro Bernardi. He leads the tour and points out the local flora on the way. Now I know not only how devil’s claw and tiger lily look, but also that the journals of the stone pine are tasty for both, Nutcracker and humans. The latter rather enjoy it as hard liquor as I try out later in the Stevia mountain cabin. 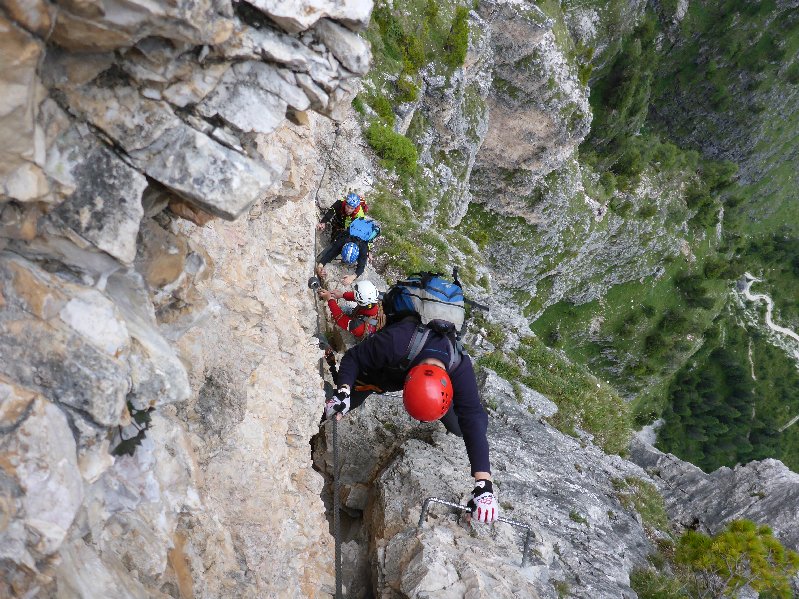 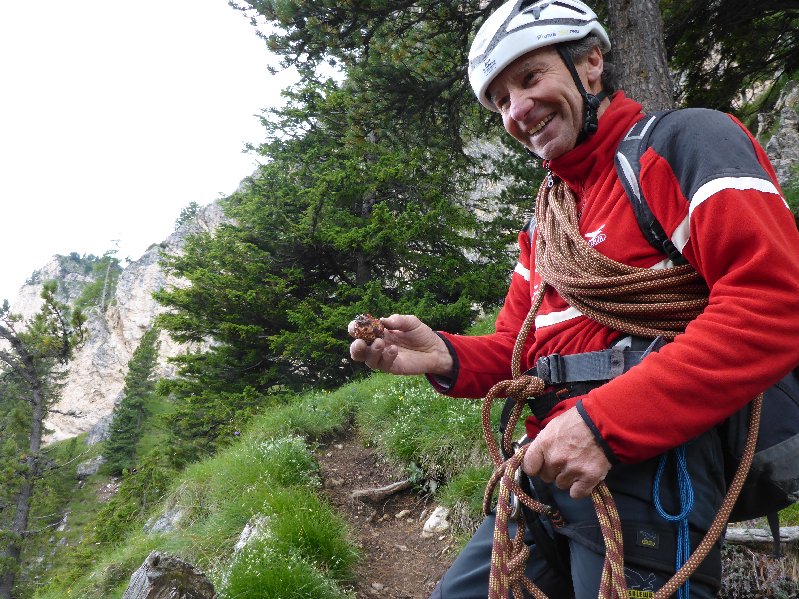 In the evenings there is also a tight schedule packed with climbing competitions in Selva and Ortisei, fashion shows. During a poolder party at the swimming pool Mar Dolomit young locals show that bouldering and climbing belong to their everyday life. For the first time, I witness a back flip on the slackline. In addition, the idea to combine local traditions such as snapping the whip and the highline, I find quite original. Here is the video. After four hours of sleep, we rise early the next morning for a sunrise hike to the peak Great Cir. Even though the sun rises only secretly behind the clouds, the view of the surrounding mountains is impressive. 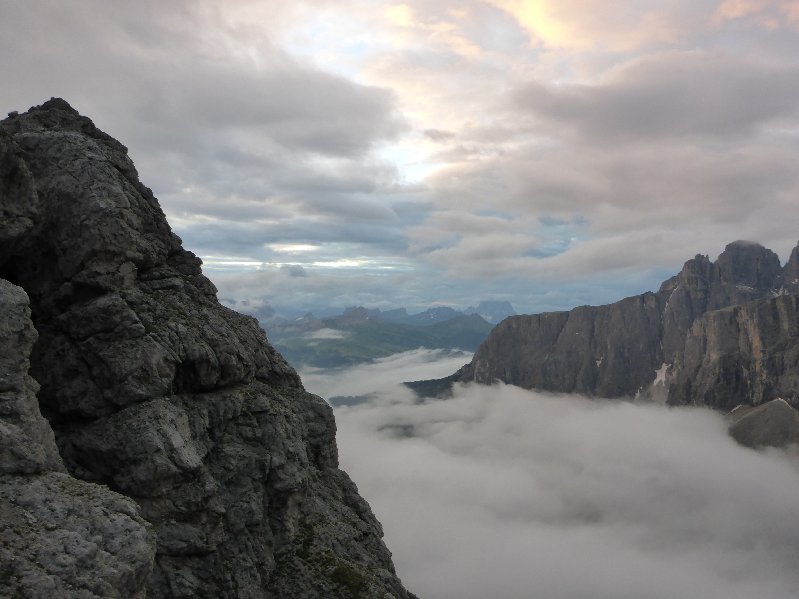 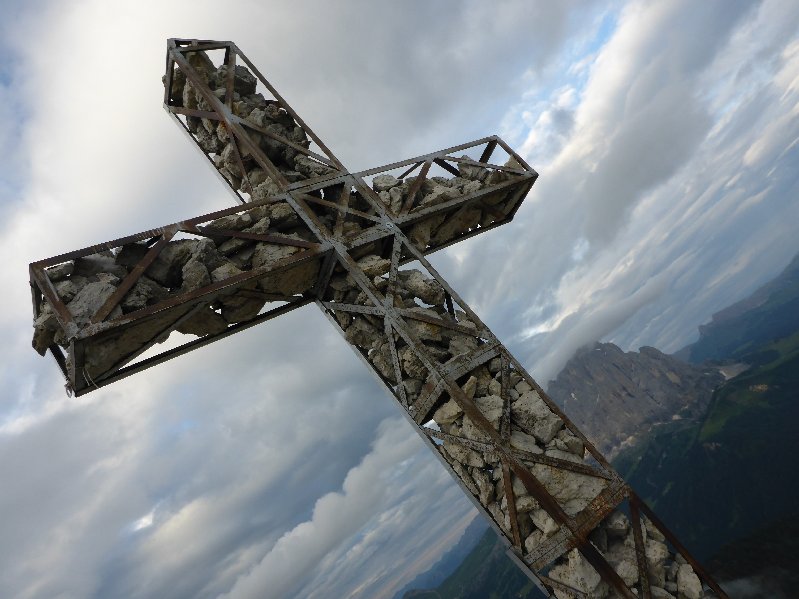 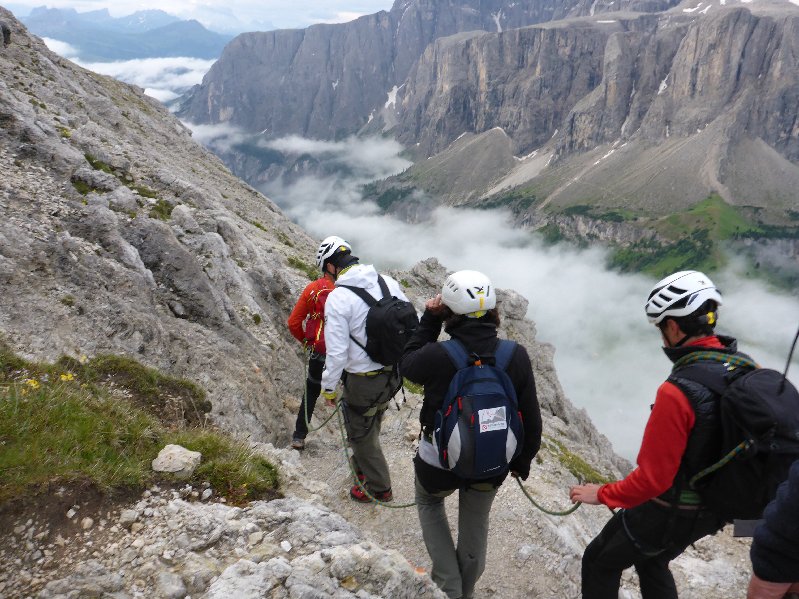 The day is not over, yet. Before we depart, we climb the first Sella Tower of the five-membered Sella group. It is easily accessible from the Sella Pass but the 180–meter-high climbing route takes about two hours. Like on the previous days, we have a mountain guide with us. He does the lead climbing, we clamber comfortably after him and take pictures. Our guide has chosen the route “Kaminführe”, rated about III + to IV in difficulty. Because the mountain guide has full responsibility, he makes you walk even during hiking passages within the rope team. This makes me feel like a dog on a leash. 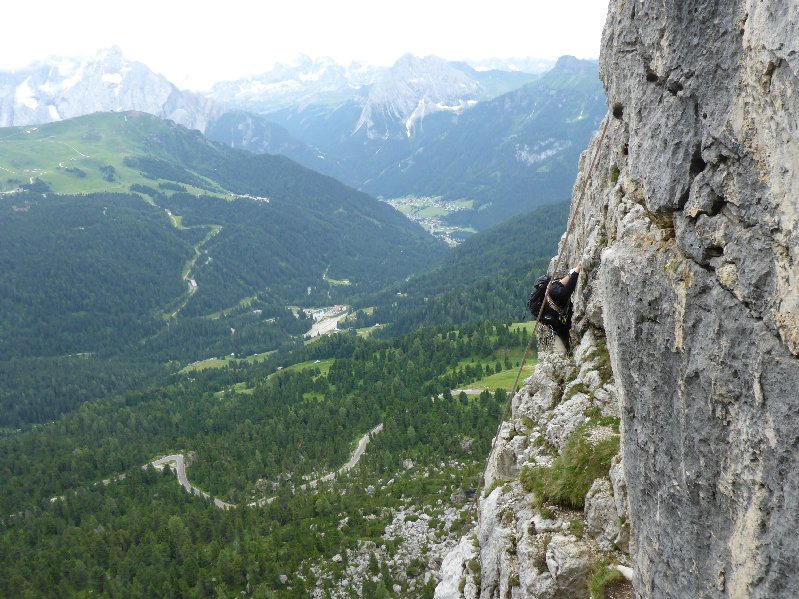 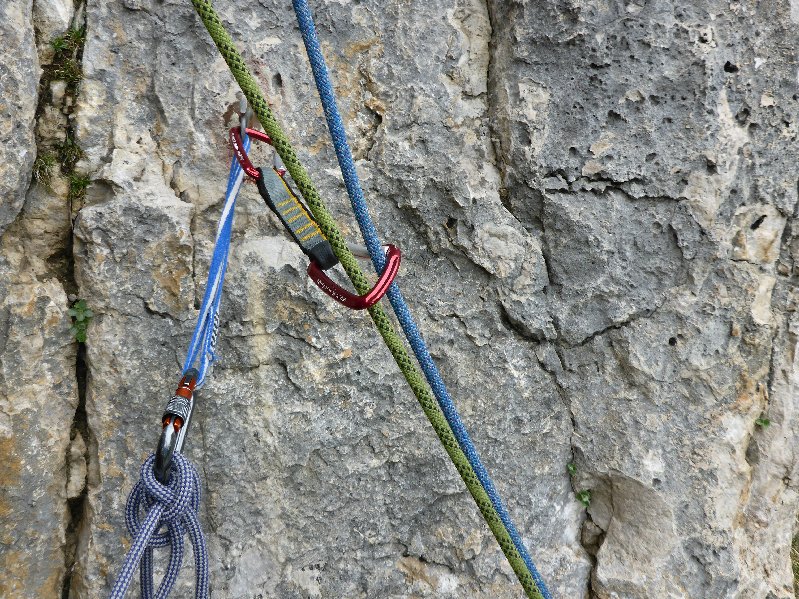 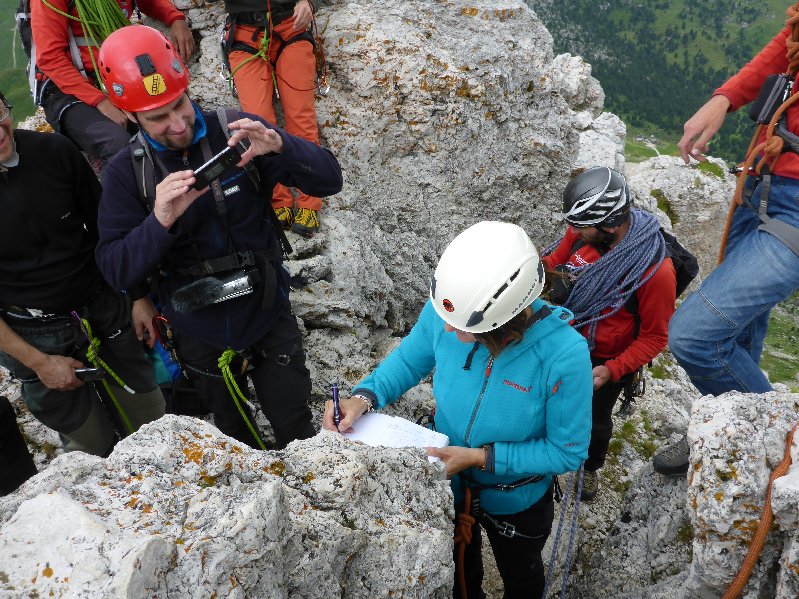 The “Kaminführe” is my first alpine climbing experience with about 8-10 pitches. It works surprisingly well, even if next time I’m going to wear more comfortable approach shoes and a smaller backpack, which fits better through the crevices. Although, there is a lot of traffic on this popular route, the climbing is relaxed and I only feel queasy when crossing a gap – once again, I wish for longer legs.

So, now you know where my muscle soreness is coming from. My conclusion: The Dolomites, specifically the Val Gardena are definitely worth a visit! Incidentally, the climbing festival was probably the first in a series of MOVE-Feel the Dolomites – events that, among others, will include the winter sports theme.

Here are a few links: