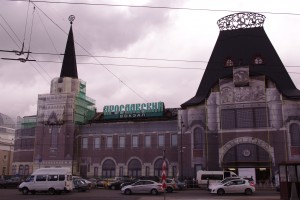 The driver repeats her sentence in Russian for the fifth time, I repeat mine in English for the fifth time: “How much does it cost to Yaroslavsky Station?” We don’t understand each other. By her tone, I realize that she is getting angry. She opens the door and points her finger outside.

This is how I get thrown out of a Moscow street car. “You can’t get far with English in Russia”, I heard this before. How bad it really is, however, you can only feel when you’re actually there. Whether it’s the street car driver, the cashier at the supermarket, the kiosk person or train station staff, they all speak Russian and Russian only. Somehow you can make it work anyway, you just shouldn’t be under time pressure.

At the airport, everything is alright: exchanging euros into rubels works without words. Traveling from the airport to the city is easy. The Airport Express costs 320 rubles (converts to about 8 euros), the vending machines even offer German and English language menus. But then it starts. Where do I get off the train? Looking dazzled at the other passengers, “Paveleckaja?” – nodding. Ok, I get off here. Then I just follow the stream of people, until I find myself in the Metro. Here, the ticket machines only speak Russian. Intuitively, one presses the touch screen field with the lowest number (30 rubles, a single driving ticket, as I figure later in the tram).

This gets me through the card reader, but where do I go from here? Fortunately, Prospekt Mira is very easy to recognize in Cyrillic letters. I just followed the signs through the underground maze – not much worse than the Munich Main Station. Because I had everything booked on short notice, I had to pick up the Trans-Siberian travel tickets at the TIS office, the Russian partner of the agency Bahnagentur Schöneberg in Berlin. They had booked the railway trip for me. Before going there, I spent some time in a Café. The Wifi is free, but the cappuccino costs the equivalent of about five euros.

The TIS is not far away, but hard to find. Some passers-by help, even if they don’t speak English, like a group of workers at the tram stop, for example. One of them is unsuccessfully typing on his smartphone, the other two can’t agree on the direction. Nevertheless, we laugh and I learn a little Russian. After I finally find the TIS, my tickets are not there. At this point, I’m physically not able to get upset. After a night without sleep, all I am is tired. “It’s going to be alright,” I think, and fall asleep on the couch.

Indeed it works out, I get my cards and make my way to the station, where the Trans-Siberian Railway departs: “Yaroslavsky Vozkal”. In the next tram, I’m lucky: a passenger translates for me and I arrive in time. Early enough to get supplies at the supermarket and to sit a few hours in the rain.