Trainride from Moscow to Irkutsk 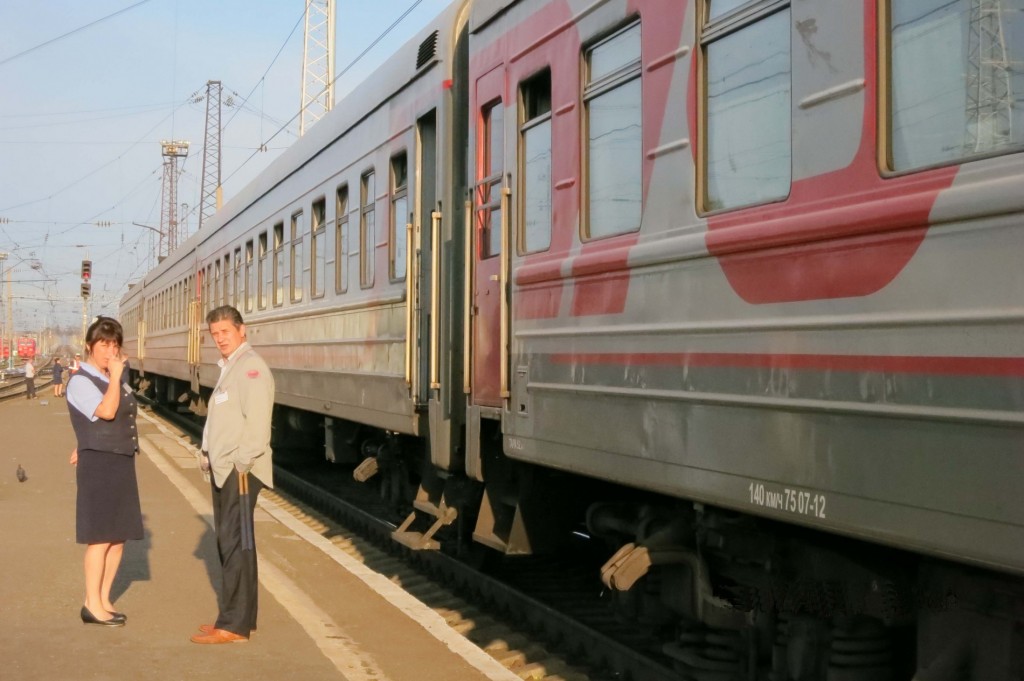 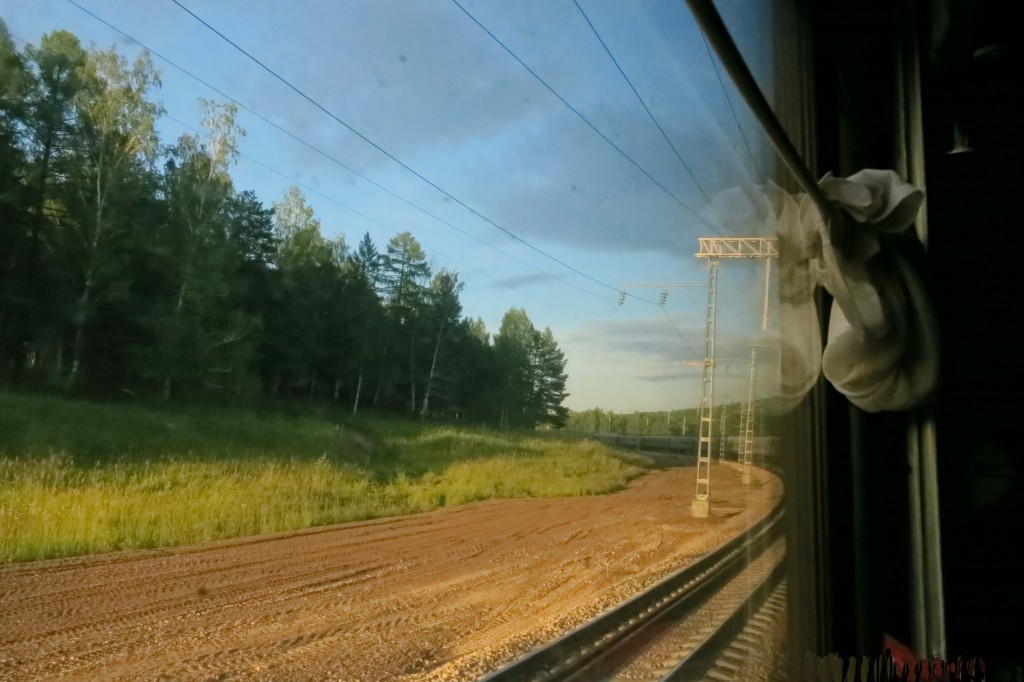 View from the Window 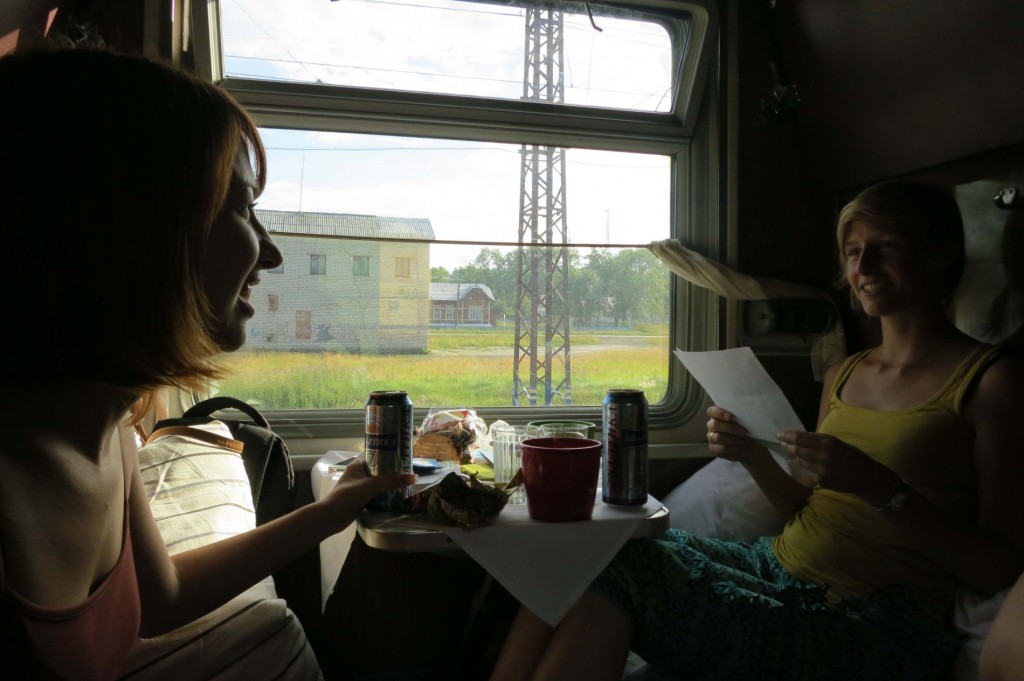 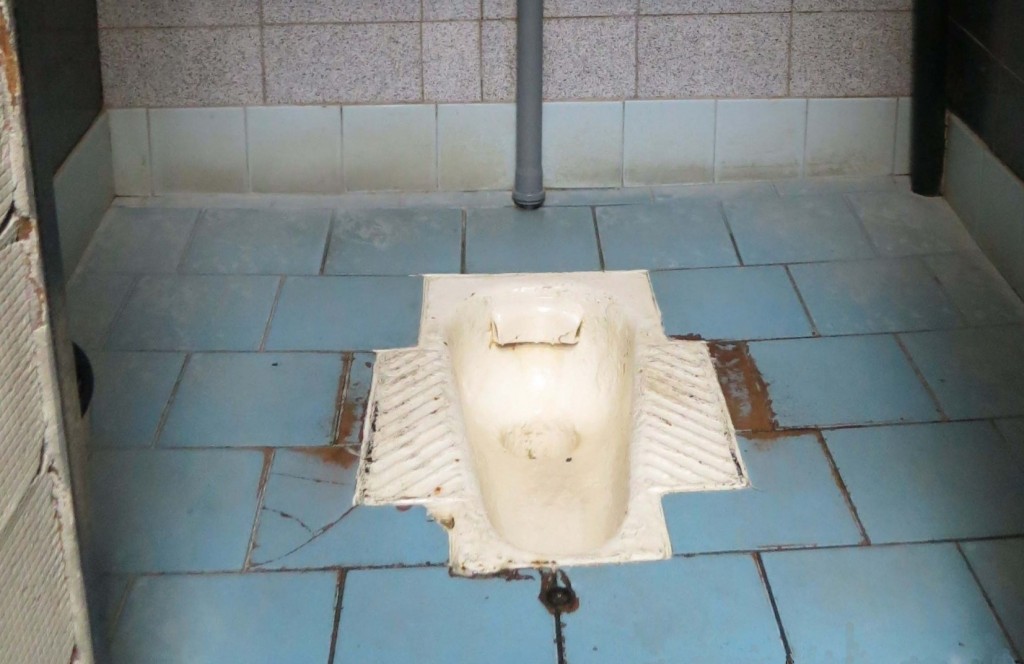 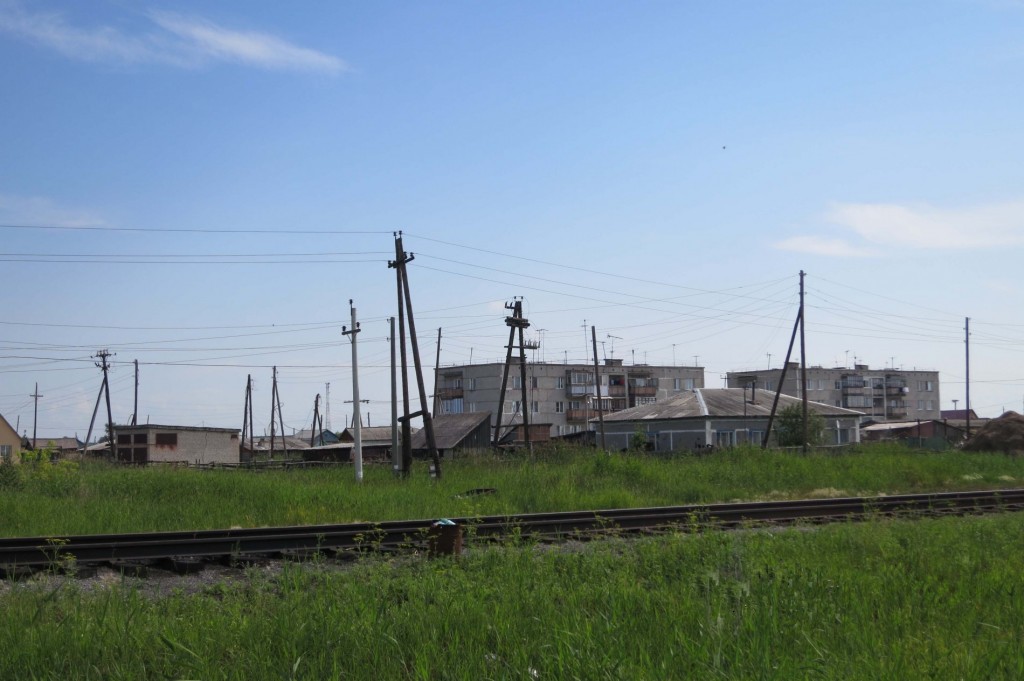 View from a Train Station 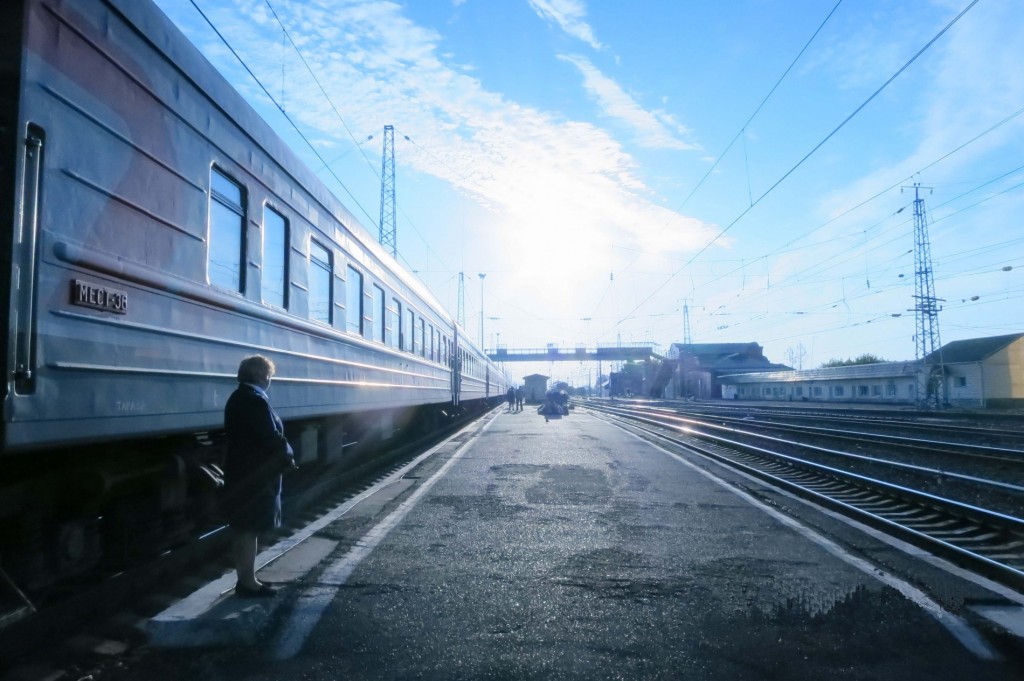 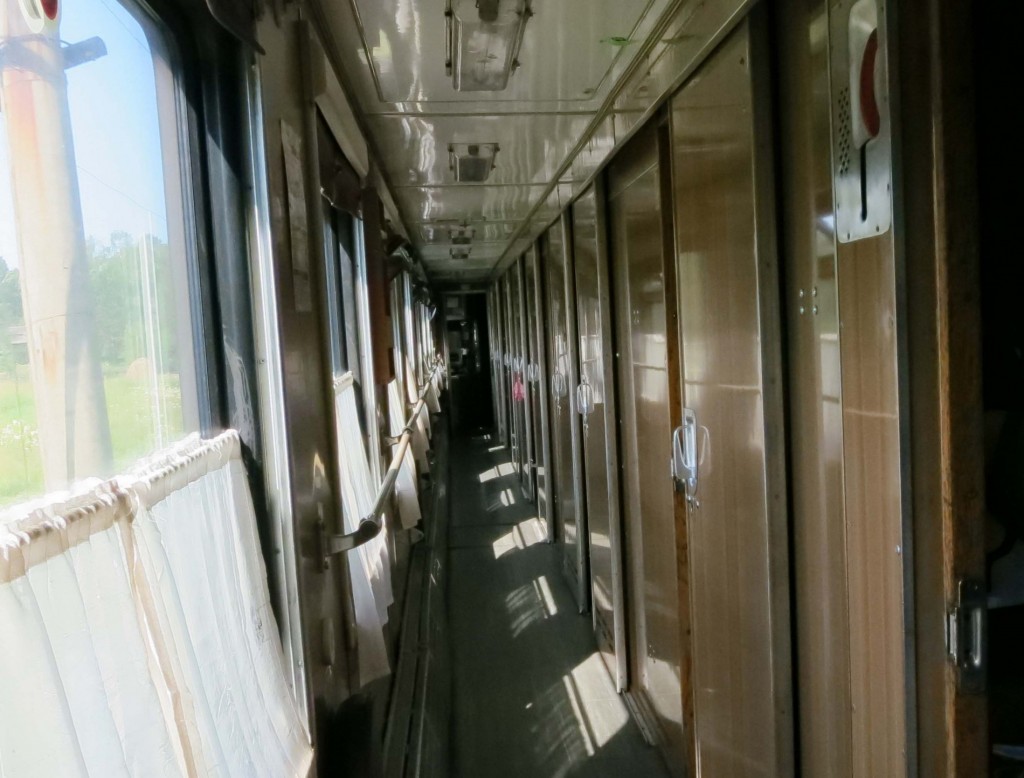 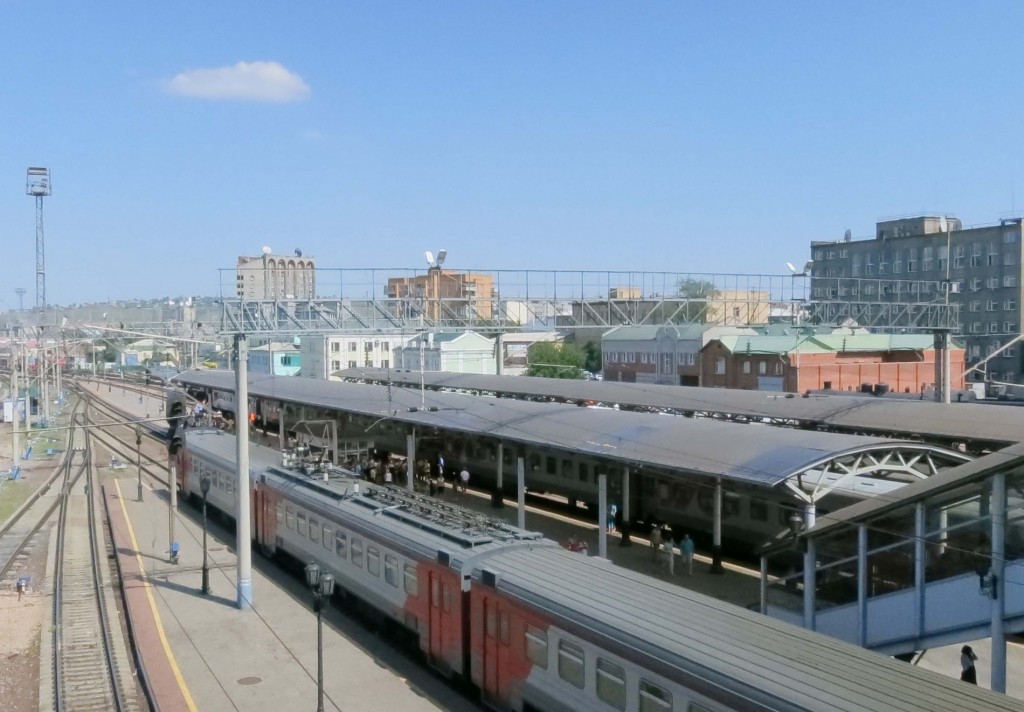 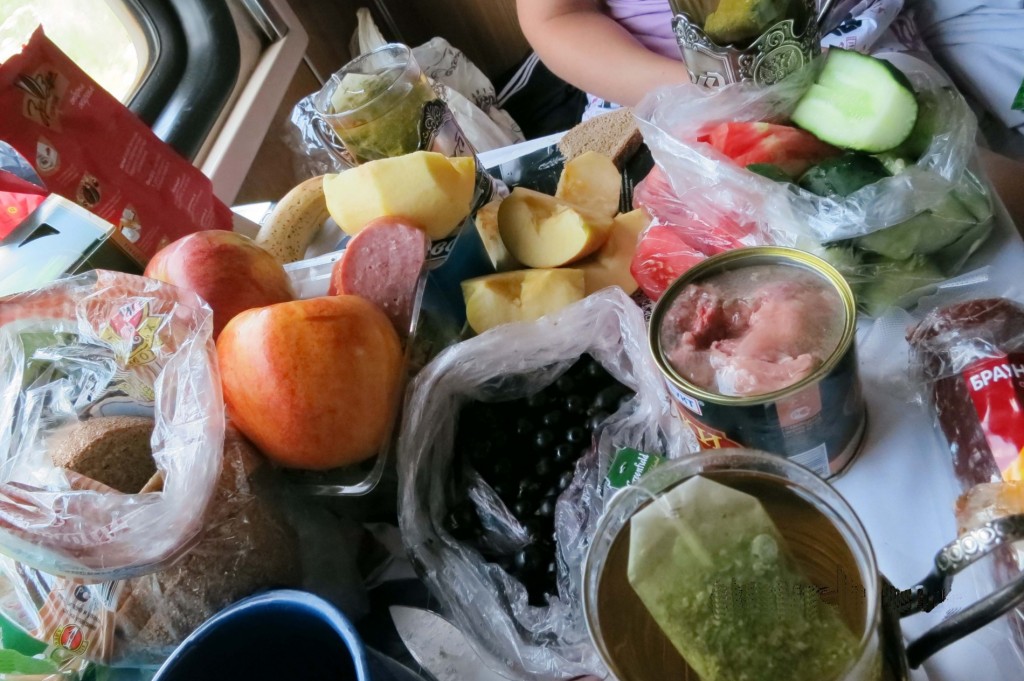 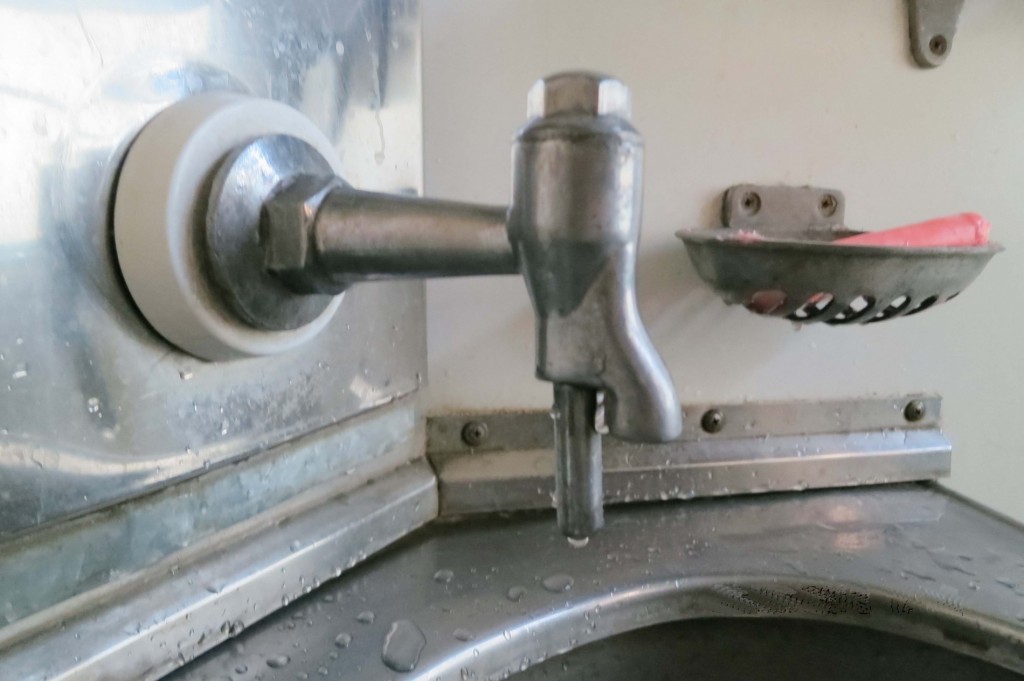 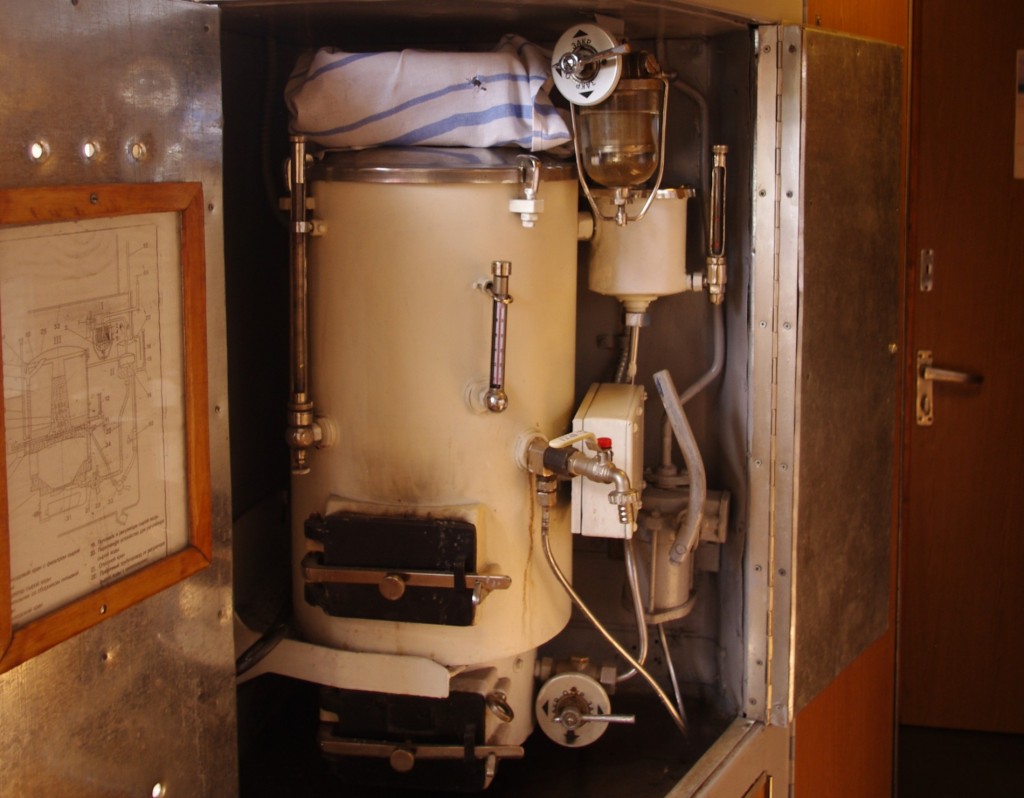 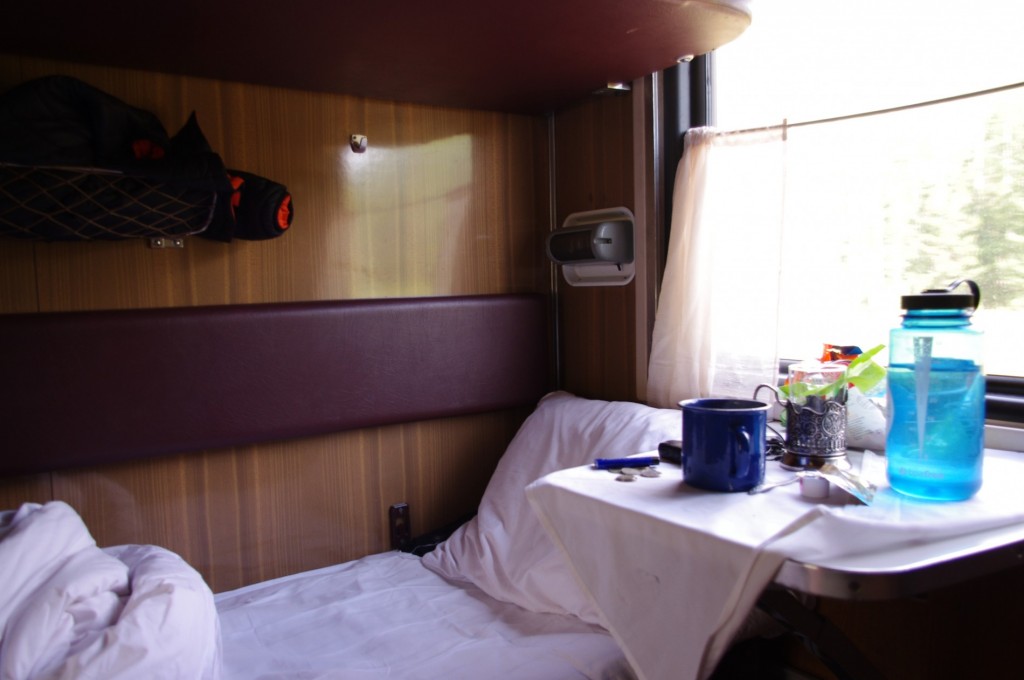 Our train stewardess is holding two bags under my nose, one has black instant coffee, the other one has coffee with milk powder and sugar. “With milk, but no sugar,” I say in English. She looks at me confused. No one seems to order such a thing. She takes the initiative and walks down the hall to a cabin, where someone speaks English. I follow her.

This is how I met the Russian woman Marina and her ​​14-year-old daughter Ilena. In the same cabin are sitting Jessica and Benjamin, a young couple from Holland. They got married a month ago and are now on a four-week honeymoon from Moscow to Beijing. When I get there, Marina is just explaining to them the Russian customs. “Can’t hurt,” I think, and I join them. Marina says, for example: “Do not eat in the board restaurant, it is not healthy. Buy the homemade food from the old women on the track.”

Of course, we immediately follow her advice. She interprets for us and we get boiled potatoes, wrapped in newspaper, with pickles in dill and garlic. Plus lots of fresh strawberries and raspberries. A typical slogan for travel food is “peel it, boil it, fry it or forget it.” To which degree you ignore this rule is your own choice. In no case one should pet a stray dog at the train station and then eat unwashed strawberries that still taste like soil. From a hygienic perspective this is a disaster.

The rest of the day I spend in the cabin of Marina and the Dutch. Gradually, more and more people join. Everyone wants to see the funny foreigners who ask so many questions. The track worker Igor brings the homemade meatballs from his mother. “No, thanks” He does not take for an answer, everyone has to taste. With his colleague Ivan I swap cigarettes, and we talk about music while smoking in between the wagons. if I would just get a euro for every time I translate “Du Hast” by Rammstein.

As we sit in the cabin and talk, Ilena looks down overhead from above and corrects her mother’s English from time to time. What we can’t manage with language, we say with hands and feet. Jessica and Benjamin brought a useful book with pictures, called: “Point it”. Iowa, a small boy from the neighboring cabin jumps back and forth in front of the door and cuts grimaces. We laugh a lot and loudly. In the neighboring cabin someone is hammering against the wall. A young lawyer who also joined us, says in broken English: “If man wants to sleep, he will sleep.” He turned out to be a master of the political monologue. In his opinion, the Russians were far too patient. “In Turkey and Egypt, they mount the barricades, and we just sit on out butts,” he says.

Victoria uses almost the same wording. The Russian girl comes to our cabin the next day. Marina and her daughter got off at the last stop. Victoria is in her mid-twenties and on the way to a meeting . She works in marketing for an international beverage company. “Flying would have been too expensive, so I take the train,” she says. A domestic flight costs a month’s salary, the equivalent of about $100.

She is happy about having a conversation because she had expected a boring six -hour drive from Perm to Ekatharinburg . After some time we’ve got beer on the table. Victoria’s father taught how to drink when she was nine years old – for her own good. Now she is almost immune to alcohol. Her current husband noticed this on their first date. “Why I’m drunk and you’re not?” he asked. It impressed him so much that he married her. We drink on this, with the delicious ” Baltika ” beer from the train shop.

Travel Tip: With 120 rubles the beer in the train is quite expensive. At the station it costs about half. There are various Baltikas with different alcohol contents, characterized by numbers from 0 to 9. These numbers are proportional but do not correspond the alcohol content in percent.

Victoria gets off the train in Enkatharinenburg and I get new roommates – A young couple who speaks almost zero English – Jenja and Sergei. We still manage to have a conversation, with gestures, facial expressions and photos from the digital camera. All the Russians, who I meet on the train, are open-minded and helpful. Even if we do not speak the same language, they help me when I struggle with fixing the bed sheeds or they move my pillow when it rains in through the window. Food always gets shared, also the beef tongue from the can. “If you come back to the area, you have to visit us at Lake Baikal,” indicates Jenja and writes down her email address.

Breaks: The train stays at the stations different amounts of time: from two minutes to an hour. Schedules are hanging out in each train car. While you go through different time zones, the clock ticks on the train stick to Moscow time. The longer you stay on, without stops in between, the harder you get hit by the jet lag in the end.

Food: There is an on-board restaurant, but the food there is expensive and, according to the locals, not good. Sometimes there are old women in headscarves selling out of their pockets homemade food from the garden for 50 to 100 rubles. But don’t rely on it, sometimes you have to go for cheap food in the station. Therefore, always keep an eye on the time, otherwise the train leaves without you.

Drinking: The only drinking water in the train is the “Kip-e-tok” from the boiler. The Russians always bring tea bags. Coffee is only available in form of horrible instant. The water from the tap in the toilets is no drinking water .

Showers: In the train, there are no regular showers. Rumor has it, for a little cash you could use the staff showers. Adrenaline junkies can try their luck at the stations. At major stations there is always a shower facility (70 rubles) – signposted with image. But that’s always a race against time until the train leaves again . So take a washcloth with you or let it stink.

Toilets: learning some Cyrillic is worth it. The word ” toilet ” is translated one to one and you can easily see where to go. When the train enters the station, the toilets are locked. At least in the cities they don’t want the tracks to stink. Often you will need to pee exactly at this moment according to the motto – do not think about white elephants. Using the toilets in the stations will cost about 20 rubles. The train toilets happen to be not much worse than those in some regional trains of Deutsche Bahn.

The ride: The old trains rumble and stutter a lot. There are people who are happy about it because they can sleep very well – I for example. But there are certainly people who get some kind of seasickness. Who is susceptible should take some medicine as precaution.

Smoking: Between the cars, there are smoking areas and smoking is allowed at every station. Cigarettes are so cheap here (converted 1,50 € ), that no one rolls tabacco themselves. It is almost impossible paper, filter or tobacco … almost.