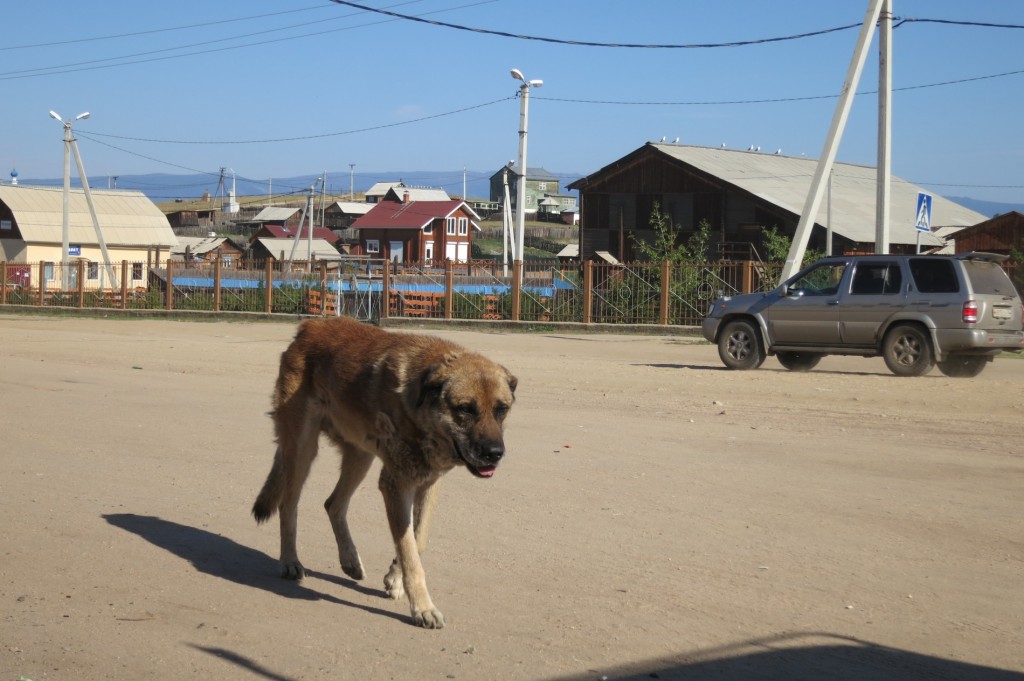 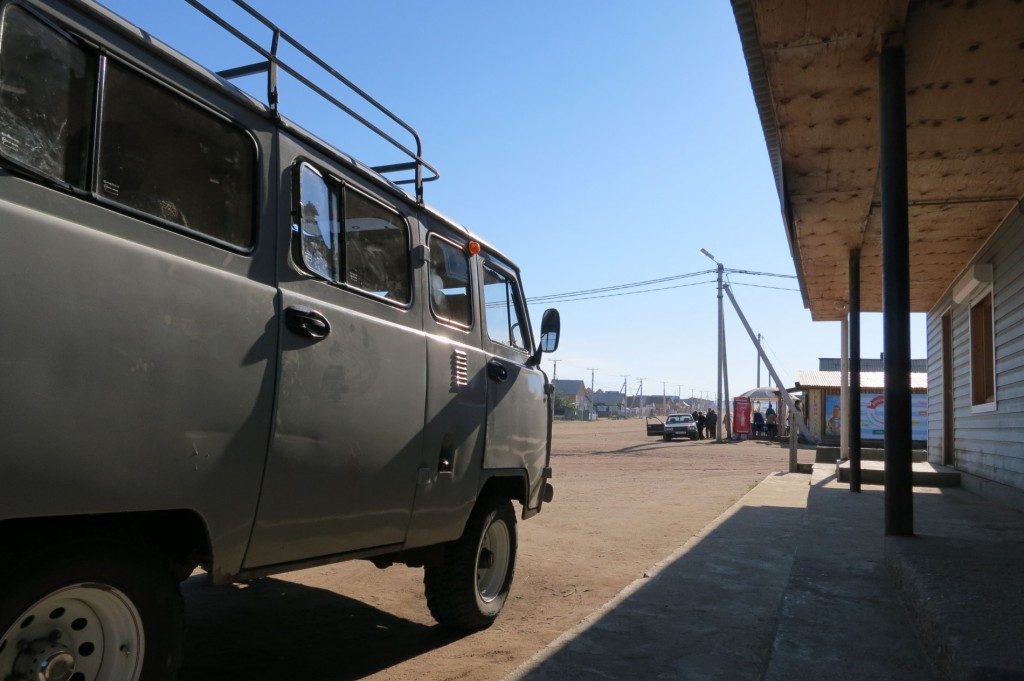 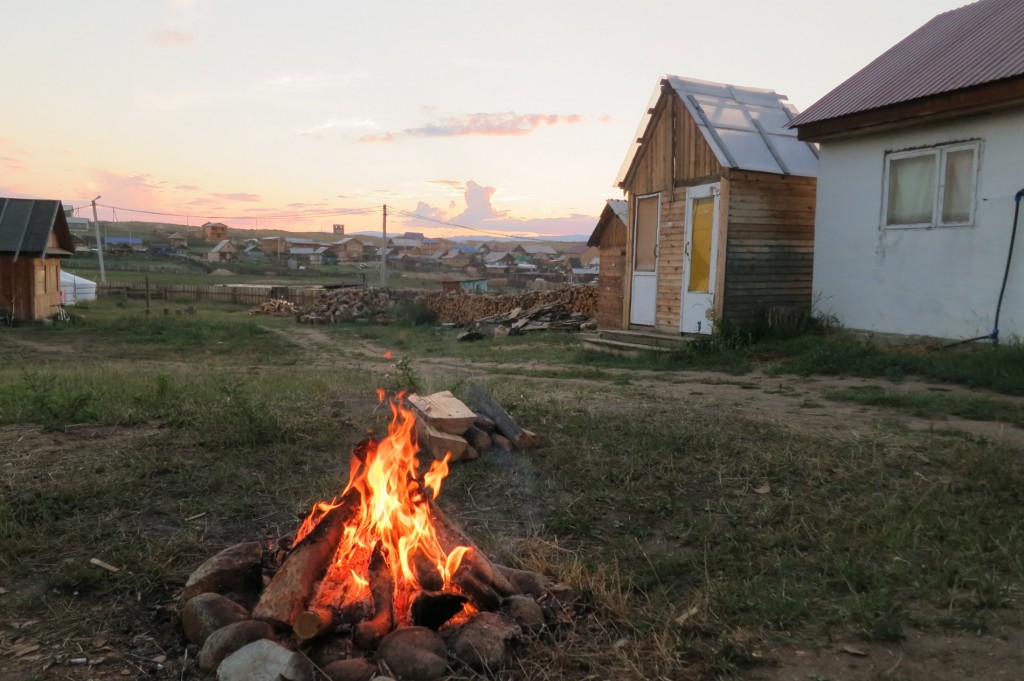 Fireplace at the Guesthouse 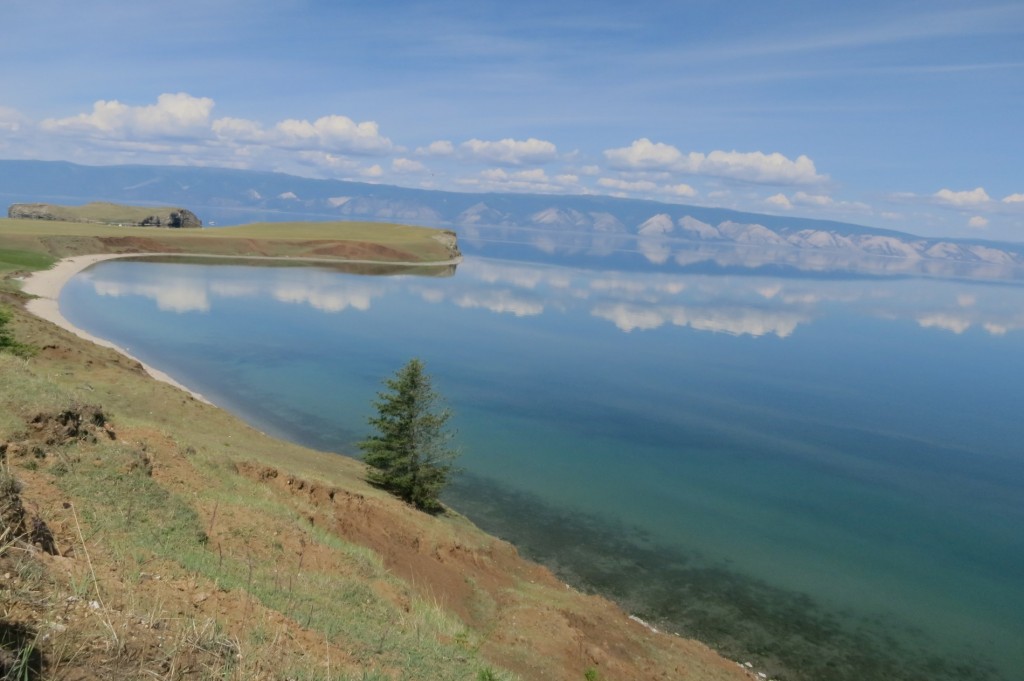 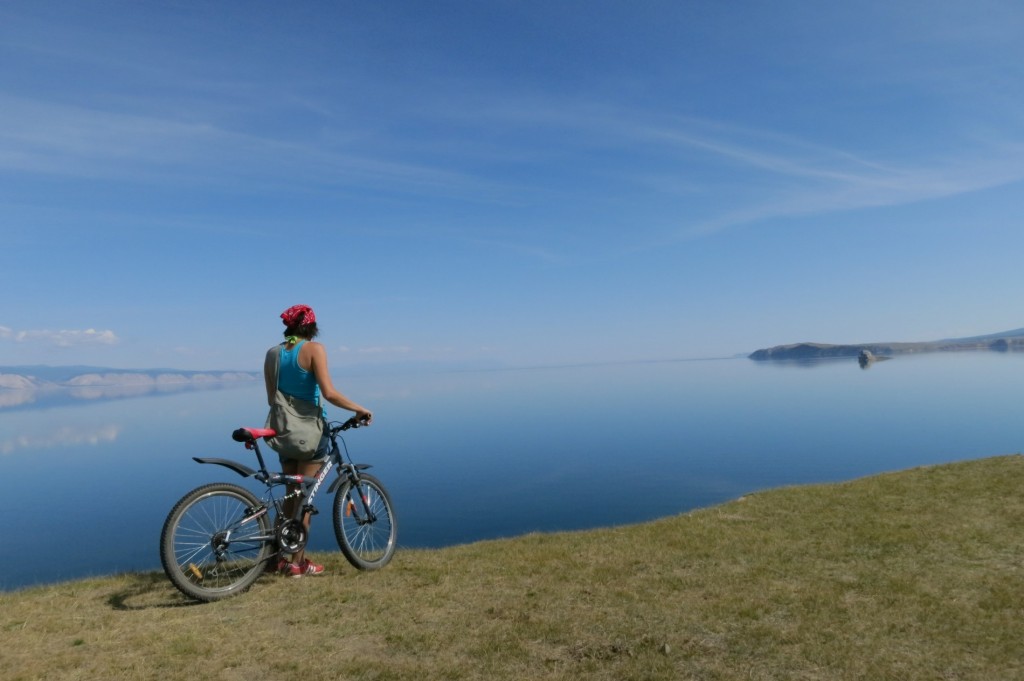 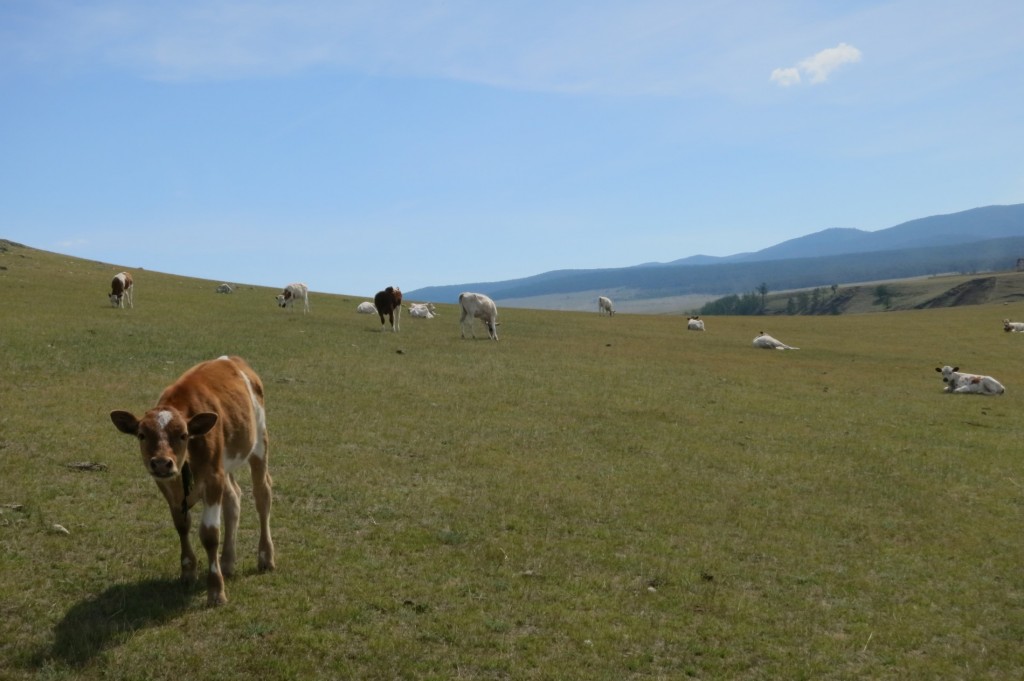 Cows on the Island 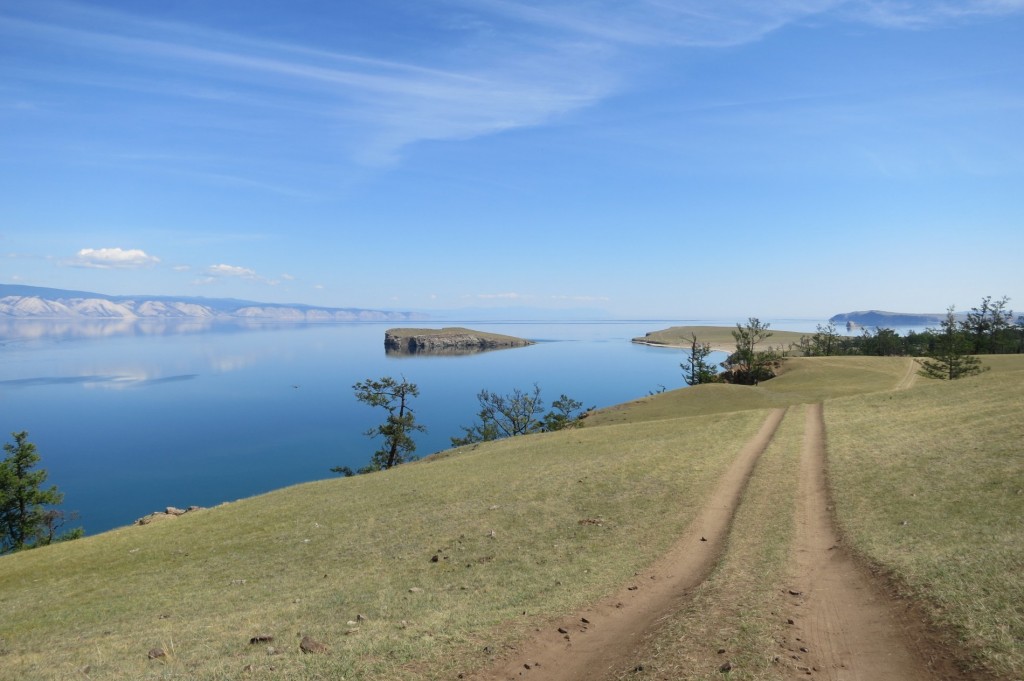 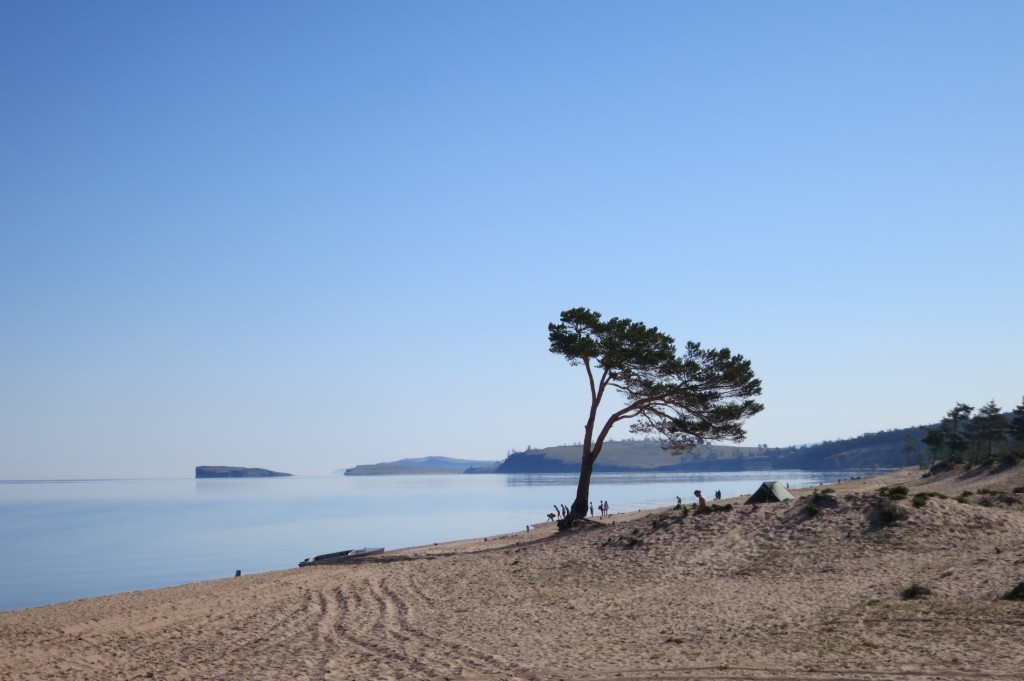 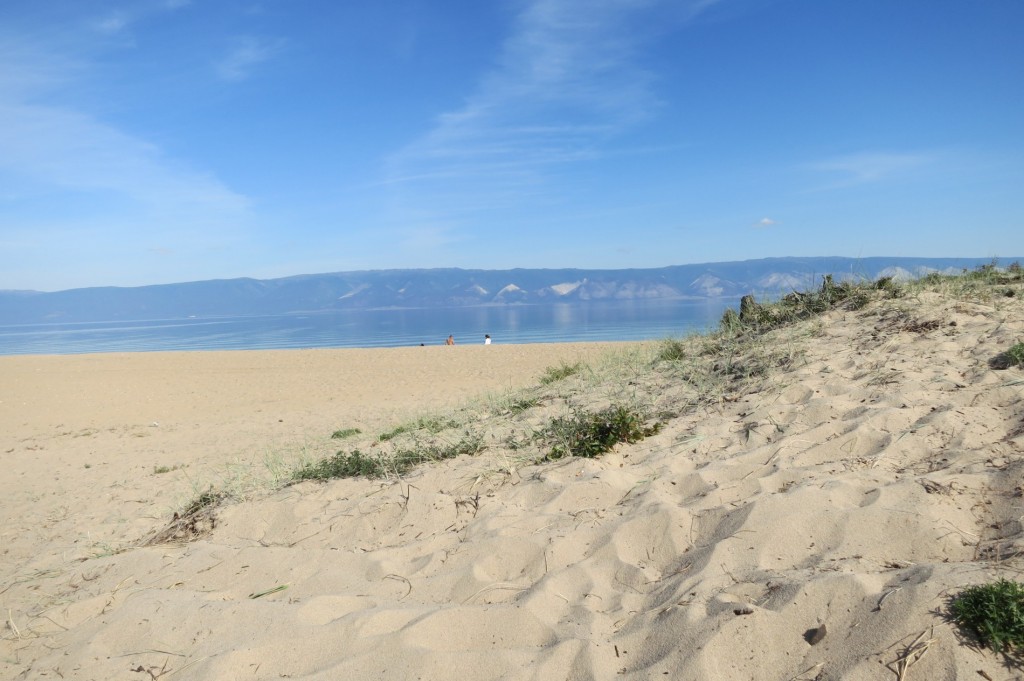 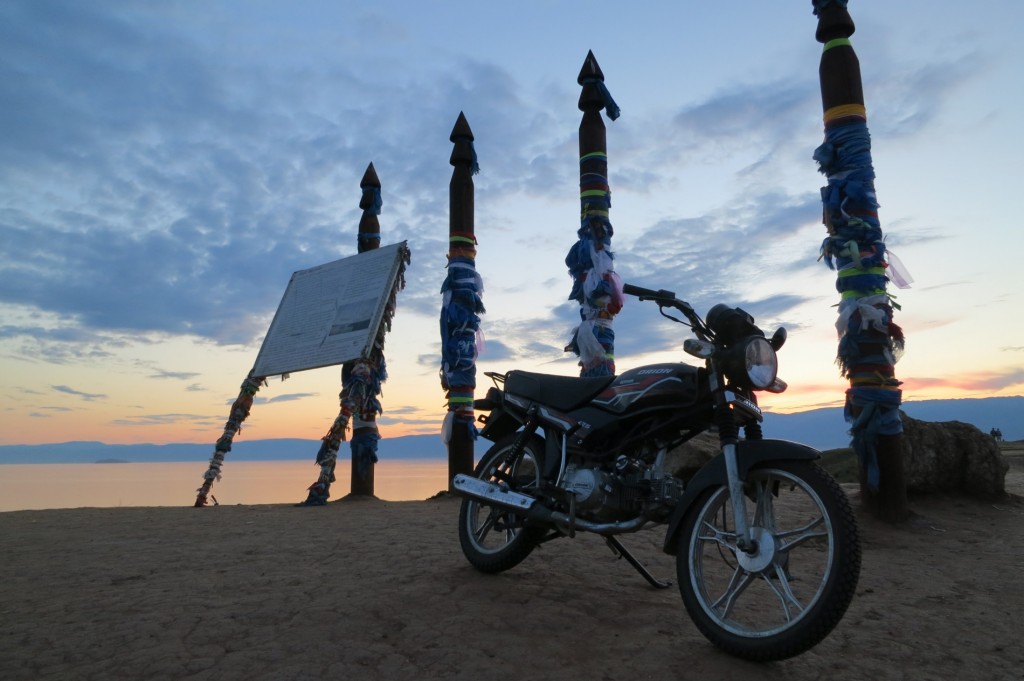 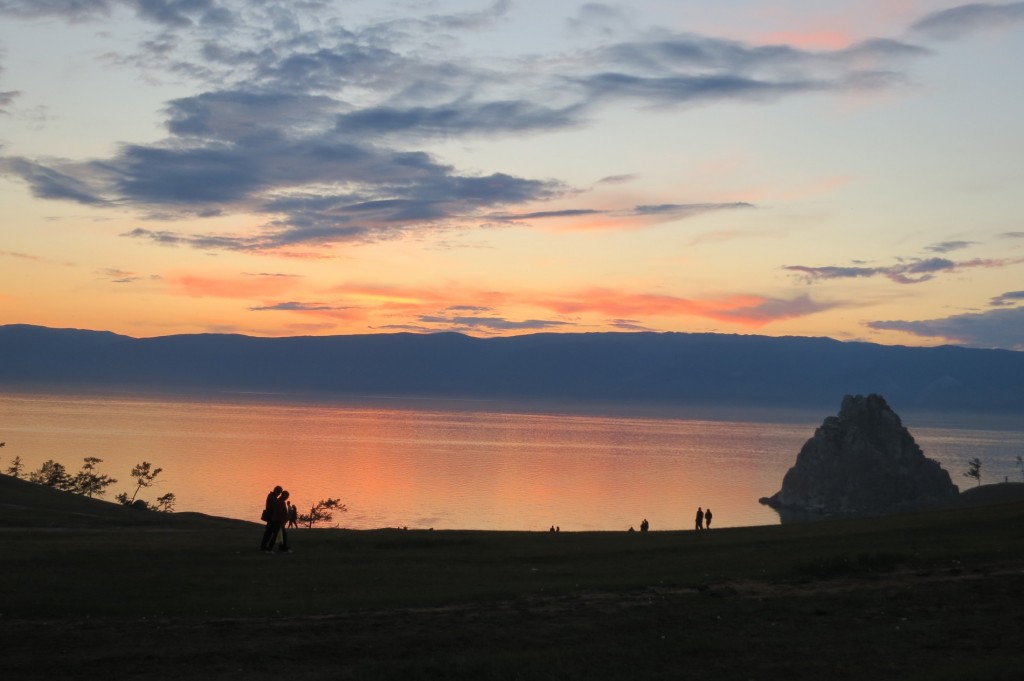 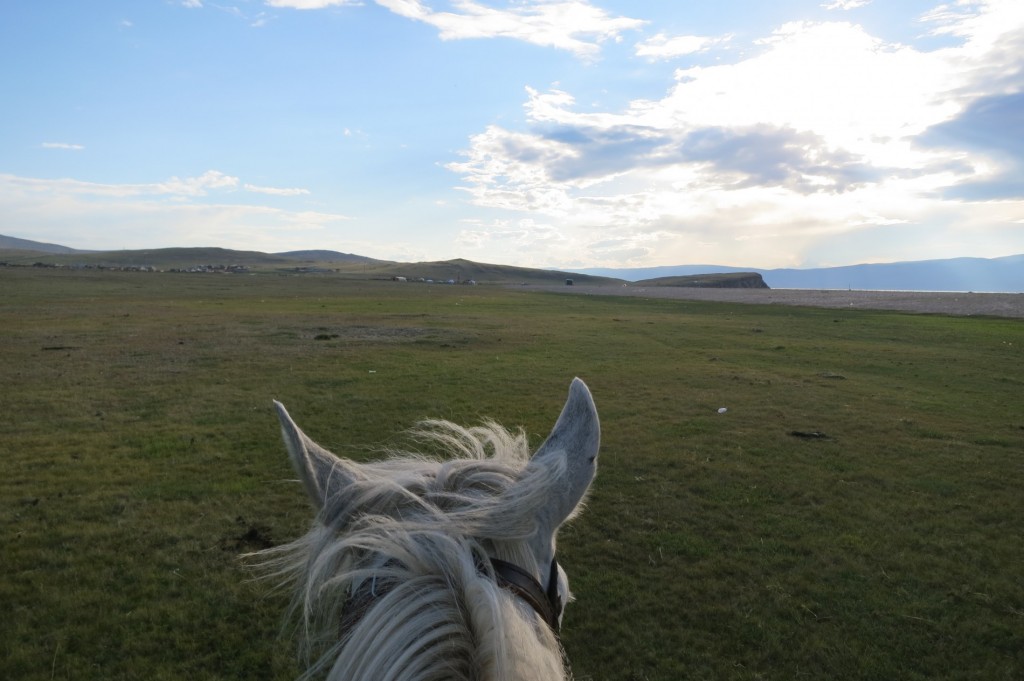 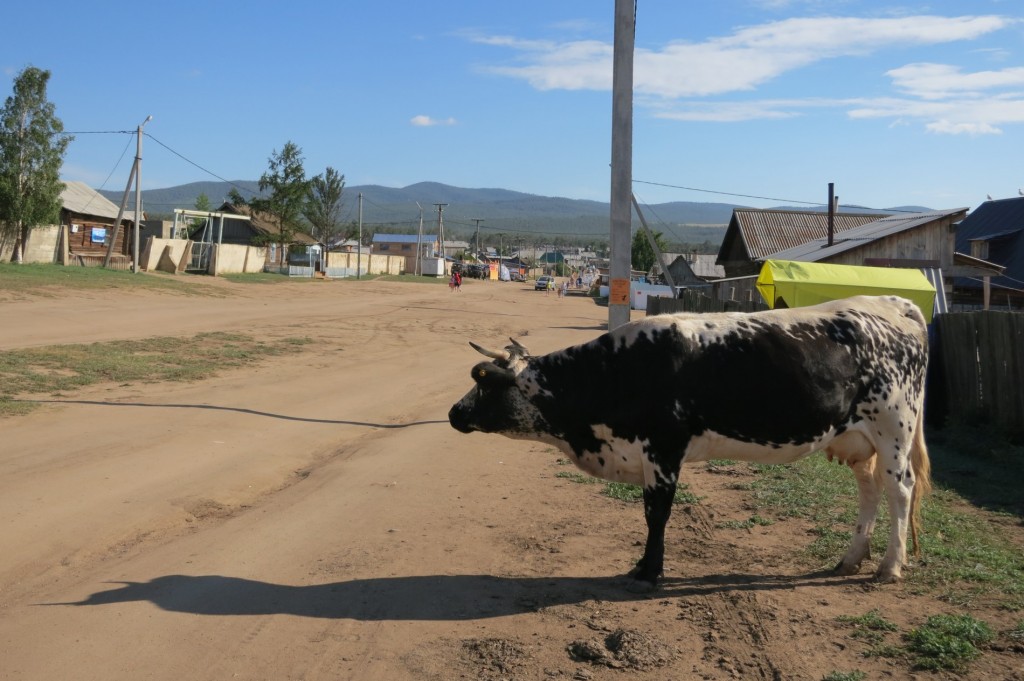 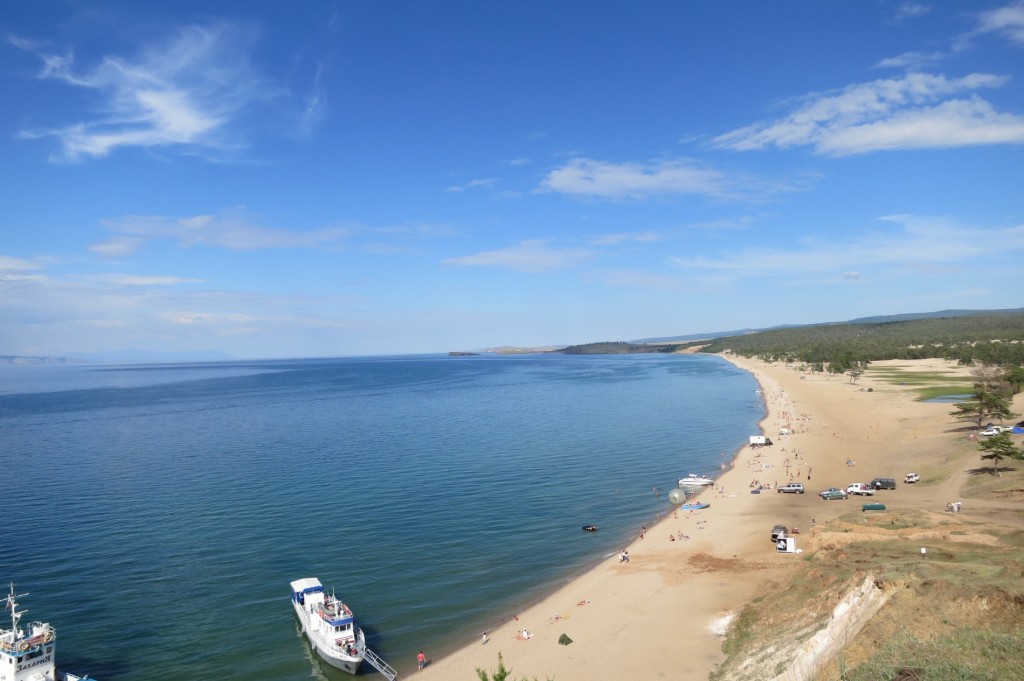 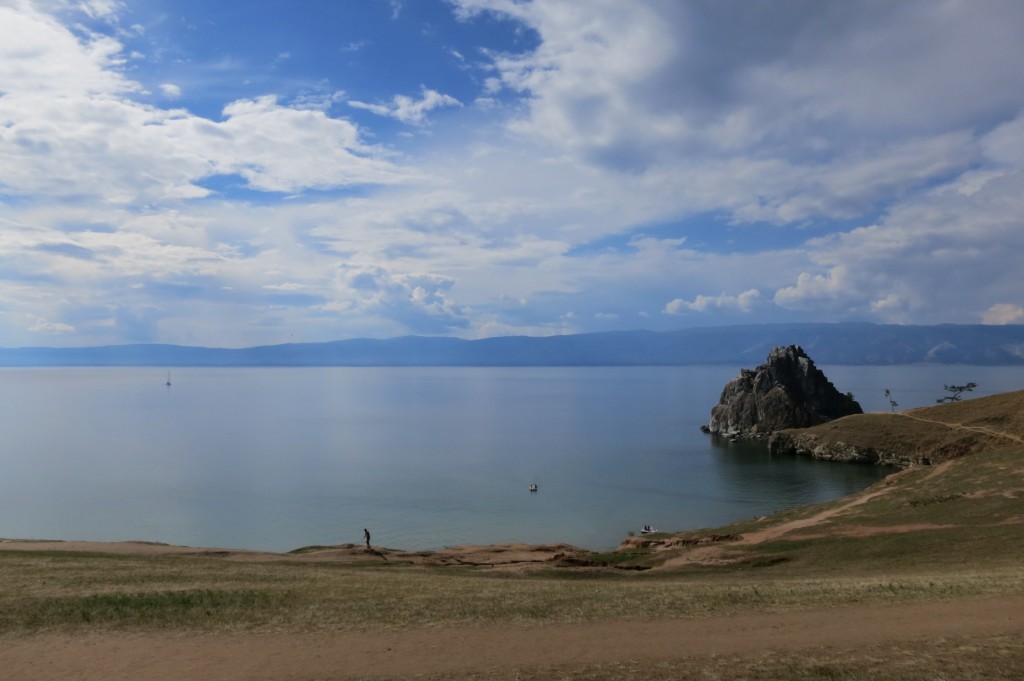 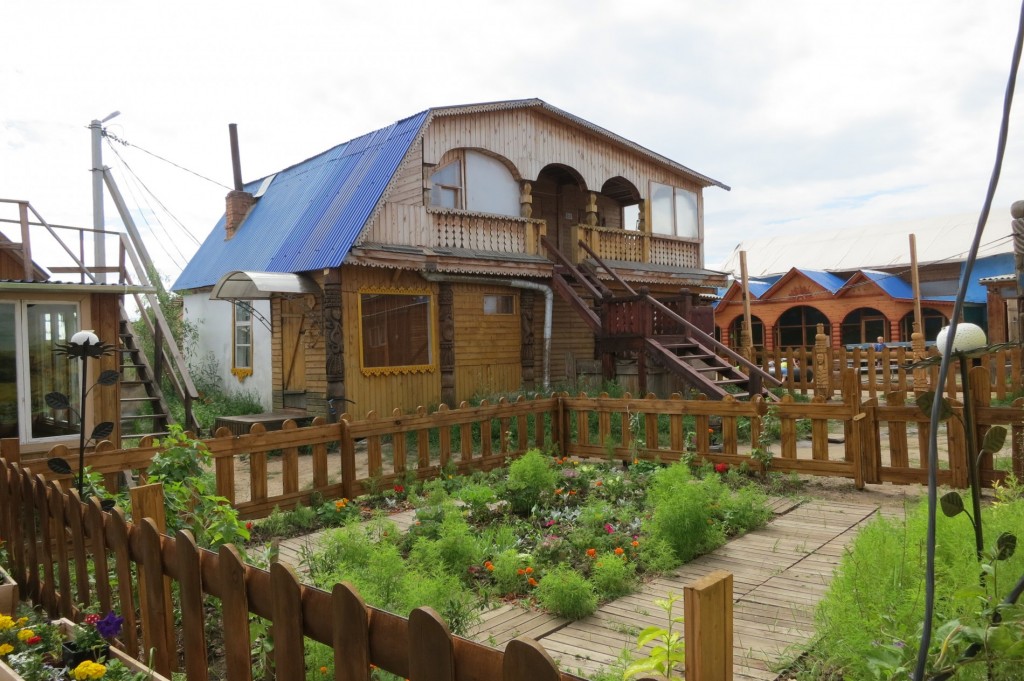 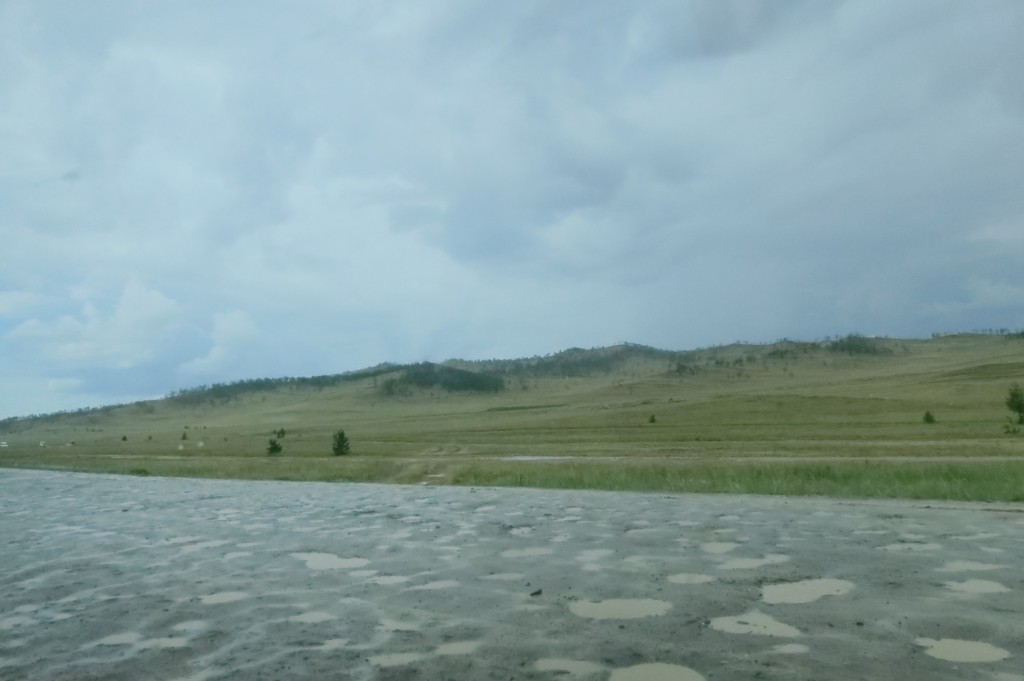 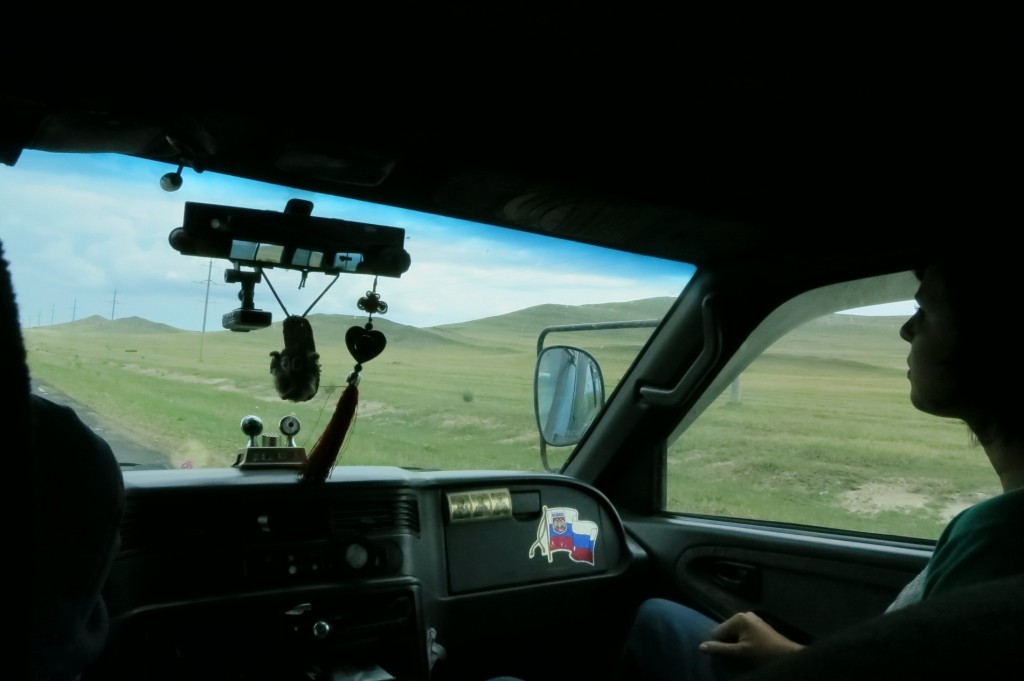 Inside the Bus to Chushir 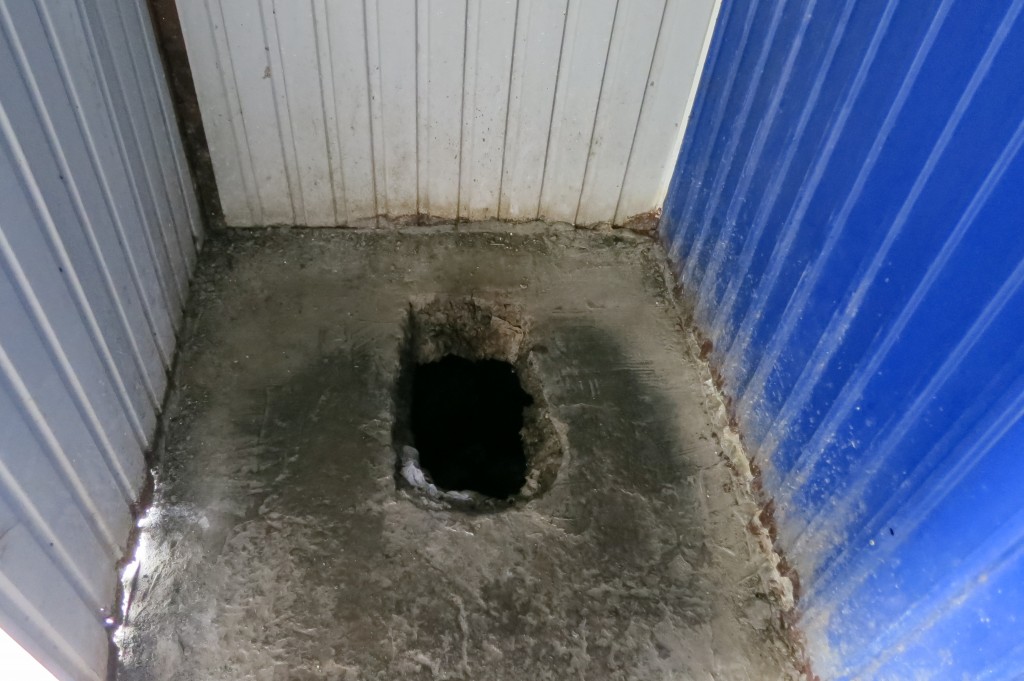 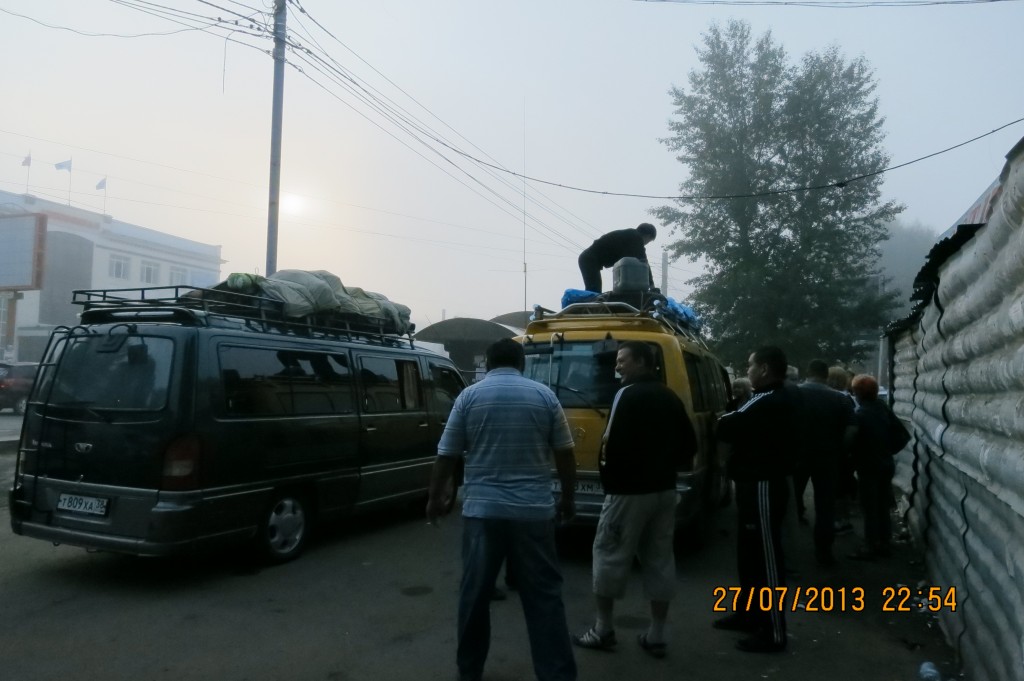 “You want to travel all alone? Wow, you are so brave. – That’s what they said at home,” says Johanna. Ruoyin and I are laughing: “Same here.”

The three of us met on the bus to Olkhon. This is the island in Lake Baikal – a hot tip by Sasha, my “couch surfing host” at Irkutsk. What I will be doing there and where I will be staying, I do not know.

The bus stops for lunch at a gas station and we start talking. Johanna comes from Lapland, where she is a Finnish teacher. Ruoyin is originally from China but is studying political science at San Diego, USA. She’s doing a semester abroad in St. Petersburg and wanted to take a closer look at the rest of the country. She speaks Russian, which would prove to be very useful later on.

Whilst on the bus, the Russian girl Alona is with us: She is also traveling alone in order to visit relatives who live in a cottage on Olkhon. We didn’t meet her again later on. All of us were wondering why there are so many women who travel alone. Johanna says, she recently read about the topic: men are too scared.
At least now I know I’m not the only one.

The bus ride continues – five hours on bumpy roads. The driver keeps his foot on the gas pedal. I’m impressed by the old, but tough, Russian minibus. If you get seasick on the Trans-Siberian Railway trains, you will definitely get it now. And if you still don’t feel like throwing up during the drive, you will get the urge when you use the toilets. I get the impression, the toilets get more and more basal the further I go east. At the train stations, the holes in the ground were filled with ceramic. At the gas stations there is only a hole and at the ferry station you cannot enter, because of the smell. Later in Mongolia the toilet consists of hole, without ground just two wooden boards. If we were in Germany, it carried as a sign: “Danger of falling”

Travel Tip: In such cases, always close the zipper of your pants and jacket pockets before using the facilities. You will think twice what to do, when your wallet falls to the bottom.

The waiting times for the ferries can vary. We were lucky, it only took half an hour. I was told that people had to wait for several hours. There are two ferries, one for visitors and one for locals – they check. The crossing does not take long, about 30 minutes. On the island we’re back on the minibus – the roads are not getting better. The destination is the village Chushir, the largest settlement on Olkhon. The bus stops in front of the tourist office. Although the sign is written in English, they speak mainly Russian.

Unlike me, Ruoyin and Johanna have already booked rooms in advance, Nikita’s hostel, one of the newest, nicest and most expensive accommodations on the island. It costs 1300 rubles per night for a single room. Full board is included in the price and it’s mandatory: three meals per day in the hostel restaurant. So if you go on a day trip, you have already wasted money.

Alternatively, you can get the full-board package cheaper at the “At Olga’s” Guesthouse for 900 rubles. Nightly rates without meals range from 300 to 500 rubles, but are not all that easy to find … if you don’t speak Russian. If your standards are not too high, you can eat in Chushir for 400 rubles a day. So in the end it’s about the same price for both together.

Of course, the cheapest thing to do, would have been camping on the beach. This is what many Russian tourists do. They know why, the view on the lake is amazing. If you don’t have a tent, you can rent one at Nikita’s for 300 (!) rubles. Since 2013, the National Park collects fees for staying overnight outside the village: 200 rubles. Apparently they do random controls – preferably people with large backpacks. Where to apply for permission? – Who knows.

Where I stayed? Well, let’s say, on certain floors in certain hostels for a very small amount. No further questions please.

Nikita seems to be the only place on the island where you can book tours in English. Therefore, we slowly developed a certain dislike to support this tourism monarchy. On the other hand, one probably ought to be happy that there are options at all for people who don’t speak Russian.

1st day: Arrival in the afternoon at 15.00 clock, then swimming in icy Lake Baikal – it’s “a must”. Afterwards horseback riding on the beach, costs 750 rubles per hour – definitely not “a must”. In contrast, I highly recommend drinking beer on the beach while watching the sunset.

Travel Tip: women should pay attention when peeing on the beach, at least if you cannot hide. The boats light up the shore at night.

2nd day: Johanna and I went on a mountain bike tour towards the Northern Cape of the island (40 kilometers from Chushir). Renting bikes for 500 rubles per day is ok. Although the quality is far from what you get, for example, at Lake Garda. The Northern Cape is supposed to be very pretty and the right place to spot freshwater seals. We didn’t get that far. We tried to avoid the main road and accidentally ended up on the beach. No bike lanes anywhere. So after we pushed the bikes about an hour through the sand, the enthusiasm was slightly getting less. Moreover, it was still stifling hot that day. In the end we did about 15 kilometers and then turned around. The further we got north, however, the nicer became the bike tracks along the shore.

That same day Ruoyin did a bus trip to the Cape. According to her, it doesn’t look much different from the area along the shore. She also didn’t spot any seals. Later we learned that the critters are hiding in a “secret place” in the south of the island.

Highlight of the day was the banya, the Russian sauna, followed by a bonfire in the yard … and, of course, by beer. Electricity has only been recently established on the island and therefore many properties have fireplaces with plenty of fire wood. Water tabs, on the other side, are quite rare.

Overall, I had the impression the tourism on the island is very commercial. Olkhon is nice, but after two days one pretty vies looks like the other. If I went there again, I would do a canoe trip around the island, sleeping in a tent on the beach…