Riding a Motorbike in the Icy Rain

The first time we stop because the gear chain is loose. I climb off the motorbike, Basa does, too. He sits down behind the bike and pulls a wrench from his Deel, the traditional Mongolian coat. The colorful garment has no pockets, just a fabric belt that’s wrapped around the waist. Basa keeps the tools simply inside the fold around the chest, sometimes they rattle when he moves.

So he sits behind the bike and tightens the bolts on the wheel bearing. That does not help, the gear still wobbles. He gets up and briefly scratches his head. Suddenly, he seems to have an idea, because he losens the rope on the luggage rack where the air pump is tied. Then takes a rock and begins to knock on the cord. I pull my pocket knife from my pants and give it to him. “This will be faster,” I say. Although Basa does not understand English, he takes the knife and cuts the cord into two equal pieces. One he uses to reattach the air pump, the other one gets knotted to the gear and the wheel bearings.

Once again I am amazed by the Mongolian art of knots. Those people are Masters of improvisation and this is essential in a country with poor roads, where cars and motorbikes constantly brake down. Also when I did the Horse Trekking I was amazed by what a Mongol can do with a simple string. No expensive special equipment, no straps made ​​of tear-resistant material, as we use it. A few simple cords do the job, to ride, to tie the horses or to strap the luggage, either to horses or to motorcycles and cars. The nodes are good, they hold, sometimes the ropes rip. But that is no problem, they just improvise again. 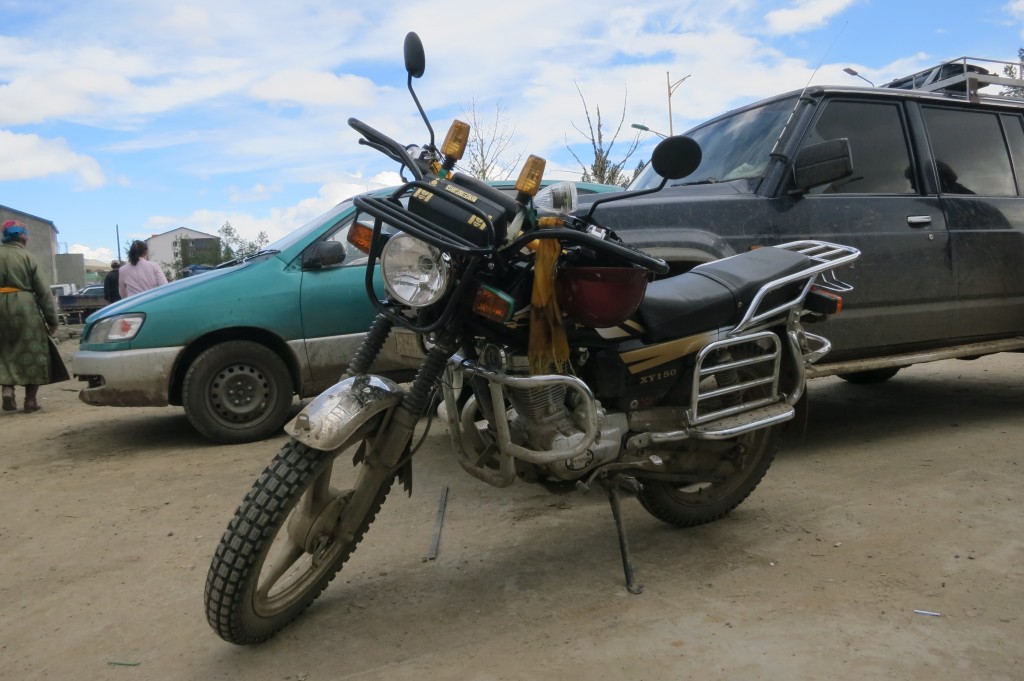 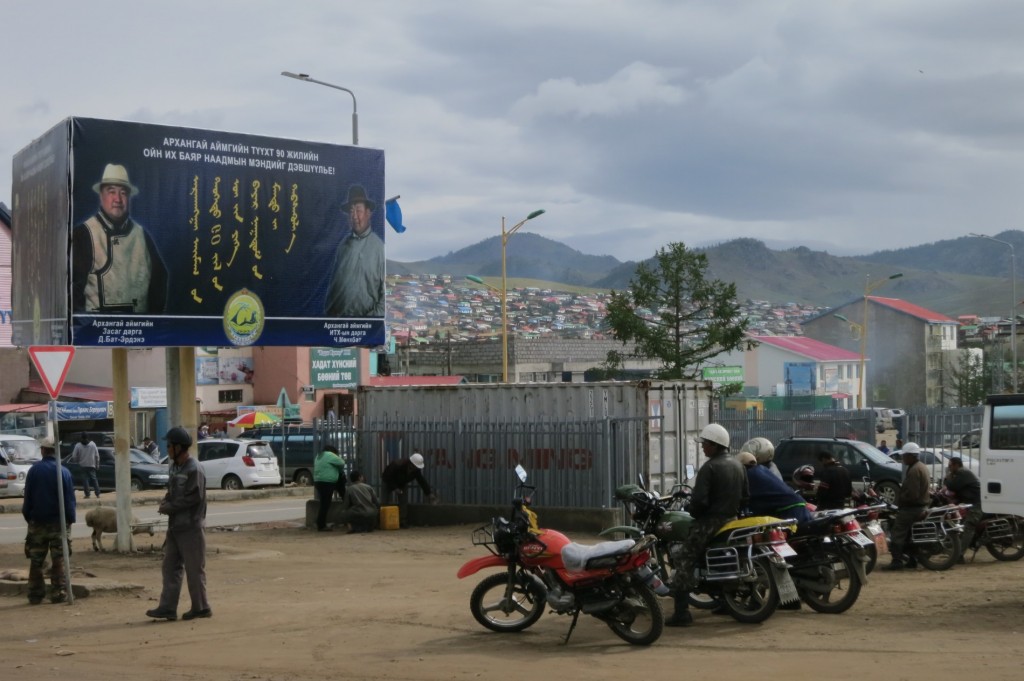 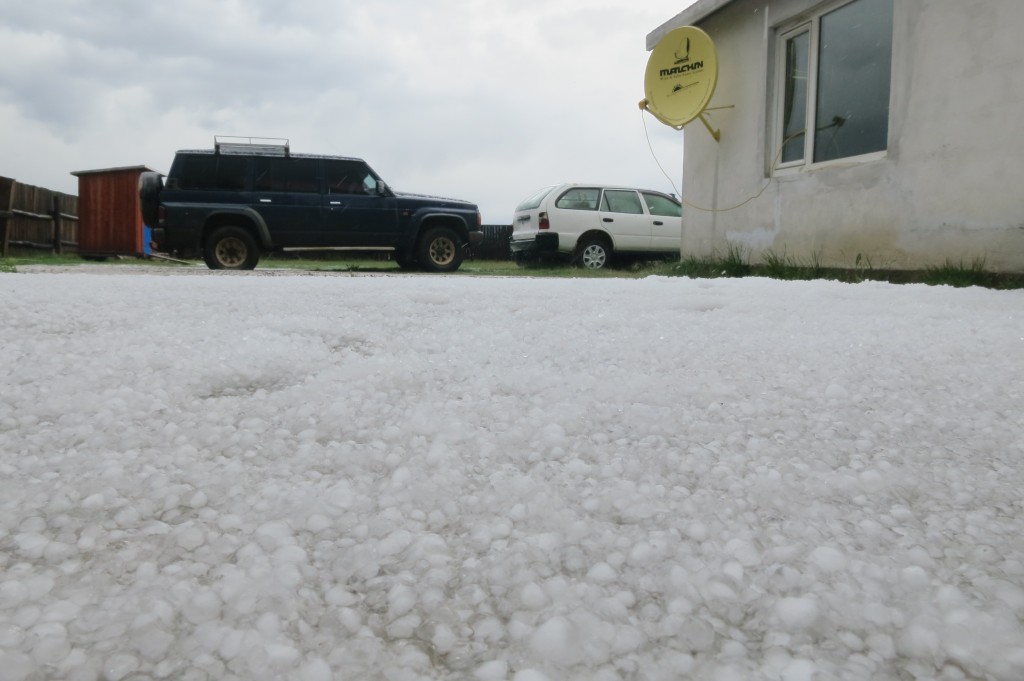 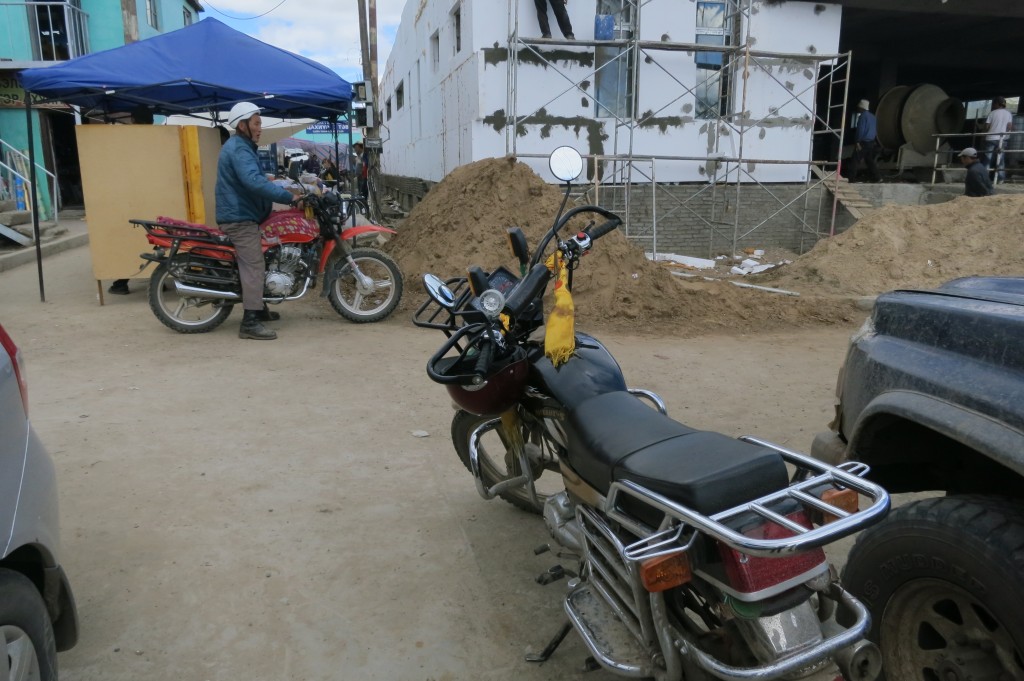 We drive on, but not for long. Soon we stop again. I have no idea what the reason is this time. For smoking Basa usually does not bother to stop, that’s also works freehand while riding. I figure we again have technical problems. Basa runs to the ditch and start dragging large rocks to the bike. “What’s that for?” I wonder. He stacks the rocks next to the bike. Then he lifts the rack up to put the bike on the pile. He does it because he wants to work freely on the rear wheel. Now I understand and start helping because the pile keeps falling apart. After we manage to mount the bike, Basa starts disassembling the rear wheel. He showed me what the problem is. I ‘m not a mechanic, otherwise I might say something like: “The wheel bearing ate itself .” Whether that’s true, I do not know, at least it looked that way. He is scratching the inside a little, first with my knife, then with the fingers. He bolts the wheel back to the motorcycle. The gear for the chain gets laced again.

Then he pulls his phone out from under the Deel, I guess from a pocket in his pants. When a voice on the other end answers, he says a few phrases in Mongolian. Then he hands me the phone. It is Tunga , his sister. She is the English teacher in Tariat, a small town at the White Lake. “Do not worry,” she says, “my brother can fix the bike. It will be as good as new.” I don’t comment on this and say that we talk about at home.

At that point I had already decided that I will not buy Basa’s motorbike. For a million Tugrik a machine that constantly makes problems is much too expensive. And as I said, I ‘m not a mechanic. I would not get very far with it. It is pleasant to ride the Chinese Shineray Mustang-5. Just the right height for my short legs and sporty with 200CC, enough for the dirt roads here in the “Wild West” of Mongolia.

After an hour’s ride, we reach the beginning of the paved road to Tsetserle. Basa wants to bring me to an ATM, because they seem to have them only in the aimag centers, the provincial capitals. I get sunburned that day because I’m wearing neither helmet nor sunglasses. Basa has at least a Baseball Cap. How fast we are going, I do not know. The speedometer is also broken. But I guess the top speed is about 80 km/h, no way of going faster with all potholes and road bumps. Basa said that the trip would take two hours. After four and a half hours we are there.

First we stop off at the relatives and drink the salty milk tea. Then we go look for an ATM. So, here comes, the twist of fate: My PIN is not working. Please recall my great financial crisis in Ulan Bator, I had forgotten the credit card PIN. Before my mother found the old home number, my bank already had ordered a new one. It would not show up until several days later at my parents house. Ok, at least I didn’t have to invent excuses not to buy the bike. At that point, I know that I will have to rain check my plans for the great outdoor adventure.

It is getting dark and Basa wants to replace the rear wheel of the motorcycle. We don’t leave Tsetserleg before 9pm. The days in the country might be hot, but the nights are freezing cold. Shortly after we left the city, the first lightning is flashing through the night sky. “Oh, this will be fun,” I think and hide behind Basa. Soon it begins to rain. Every inch of the face which is exposed to the wind, hurts like a thousand pinpricks. Although I wear all the clothes I have (Ski underwear, fleece, down jacket and rain jacket), but eventually I ‘m chilled to the bone. As usually, time passes more slowly, when you are suffering.

Basa seems to feel the same. Eventually we stop at a Mongolian “Roadside Diner” and he buys two cans of beer. First he makes them disappear in the Deel and pulls them out again some miles later. Basa downs his and throws the can into the ditch. Of course, I am happy about the beer, but I just cannot drink it as fast in the cold. So I spend the next half hour driving with a can of beer in hand. This is about the point where I stopped feeling my fingers. Despite the gloves.

Ten kilometers before Tariat, Basa suggests that I should take over the steering. In the morning we had agreed that I will drive on the way back, but because of the many technical difficulties, we didn’t have the time for it. Even if I do not intend to buy the bike and am about to freeze to death, I do not waste this opportunity. Shivering, I move to the driver’s seat. In the spotlight, the many dirt roads that lead to Tariat look like a Gordian knot. Because of the shadows, I see the potholes too late. Somehow it works. Then suddenly two yapping dogs come running at us. We are probably near a yurt and woke the guard dogs. I don’t know what to do, but I’m really afraid to get bitten in the calf. Basa notes it and grabs forward to the gas. We race into the pitch black night. I still wonder, how we managed not to have an accident.

It’s about two o’clock when we get to Tunga’s guest house. I have to pee really bad. Unfortunately, I cannot move my blue fingers and have to fumble on the buttons of my pants for a long time until I can undo it. That night it takes me about two hours of turning and rolling inside my sleeping bag until hands, feet and especially knees stopped hurting.

Well, what can I say. In retrospect, once again this was an adventure. One of which I got a nice souvenir, because, of course, I caught a cold.