In the supermarket, in front of the vodka shelf: ” Do we really need the big bottle “, I ask, “doesn’t the medium one suffice?” Kishig and Mukhan look at me with big eyes and shake their heads in sync. “It’s for the horsemen,” says Kishig. “Yes, many horsemen,” Mukhan adds. Well, I buy the big bottle and we are on our way. 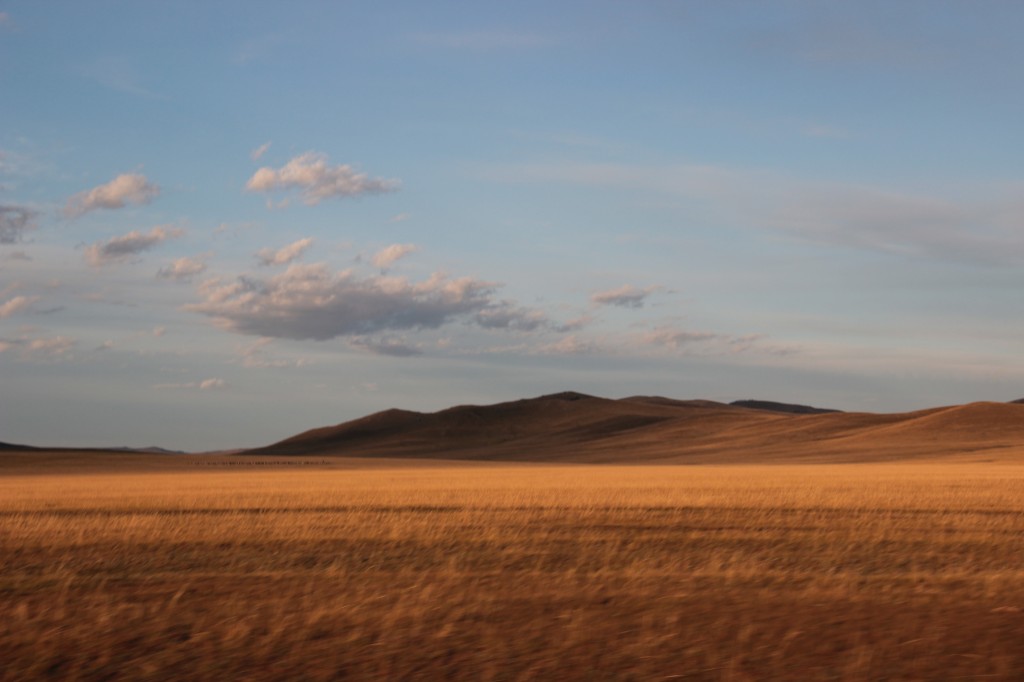 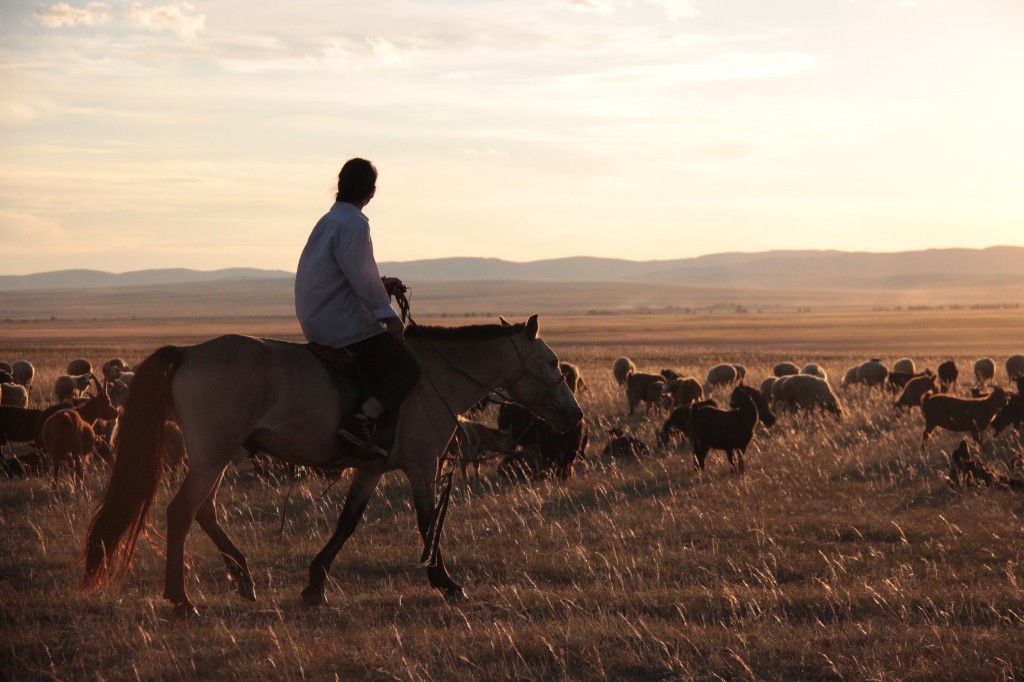 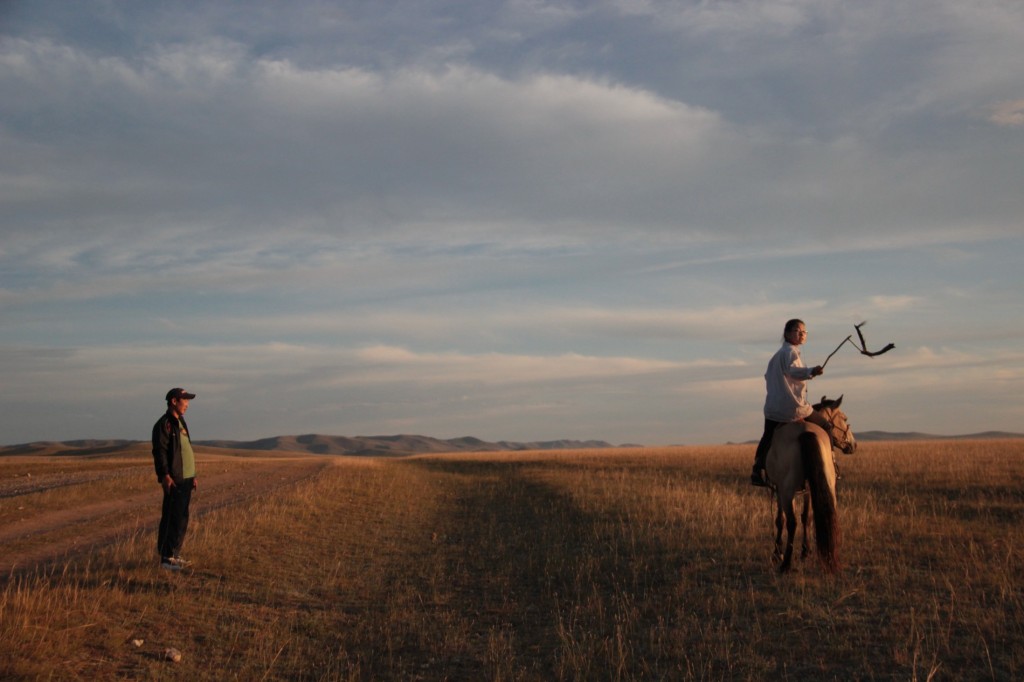 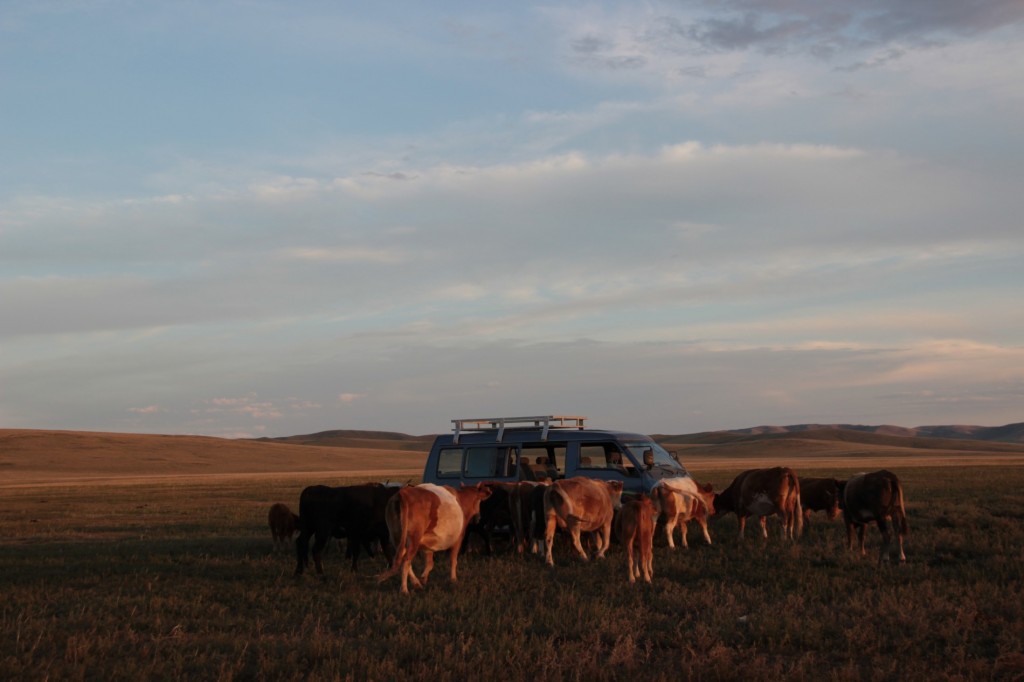 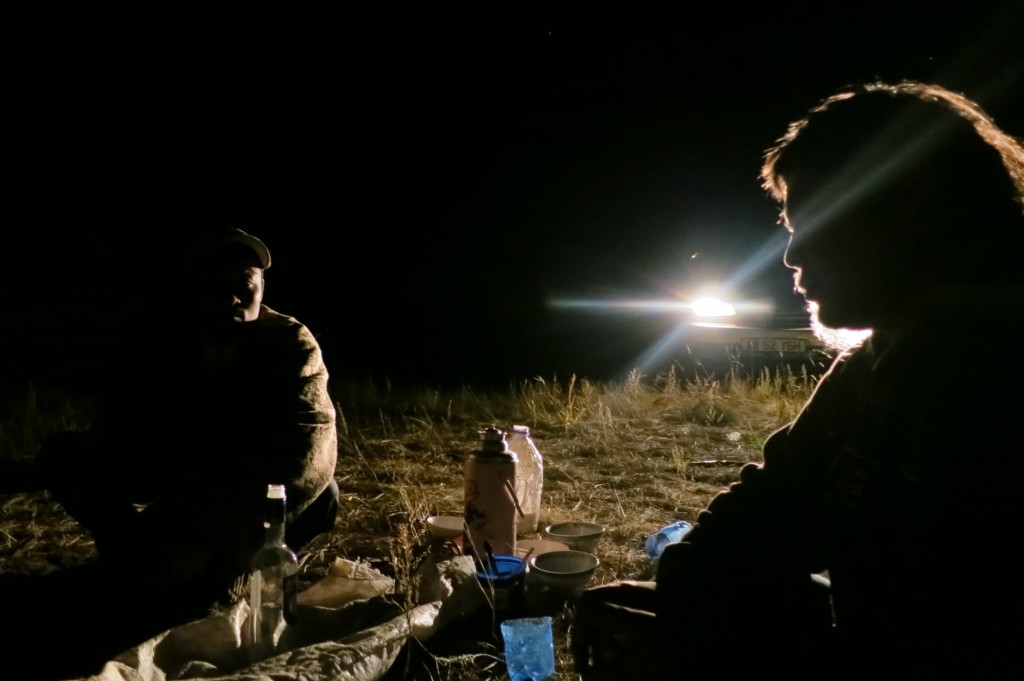 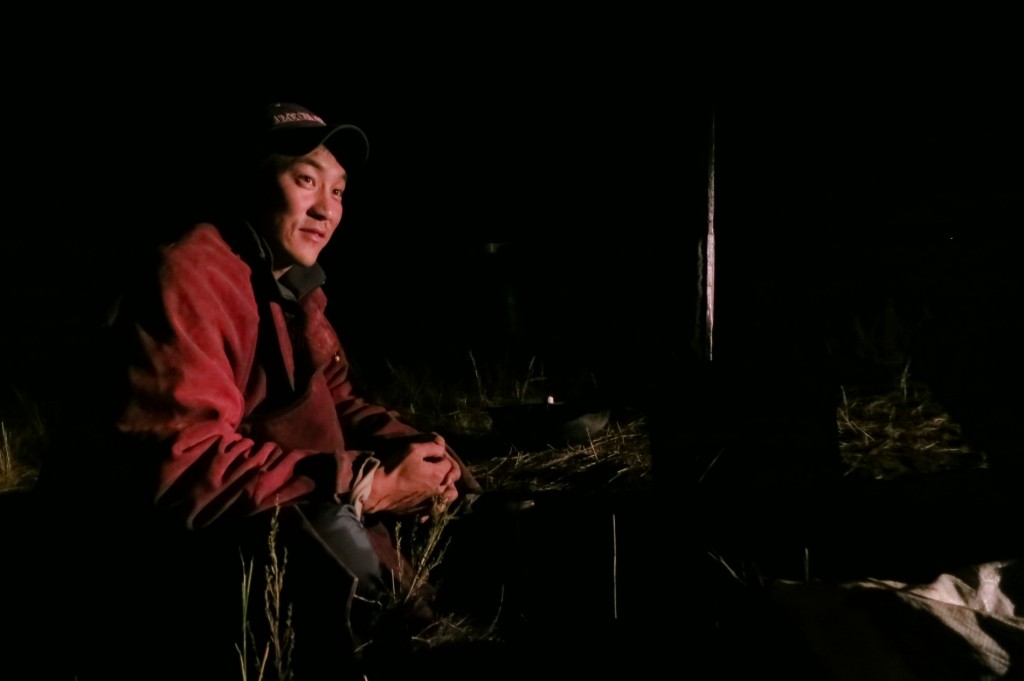 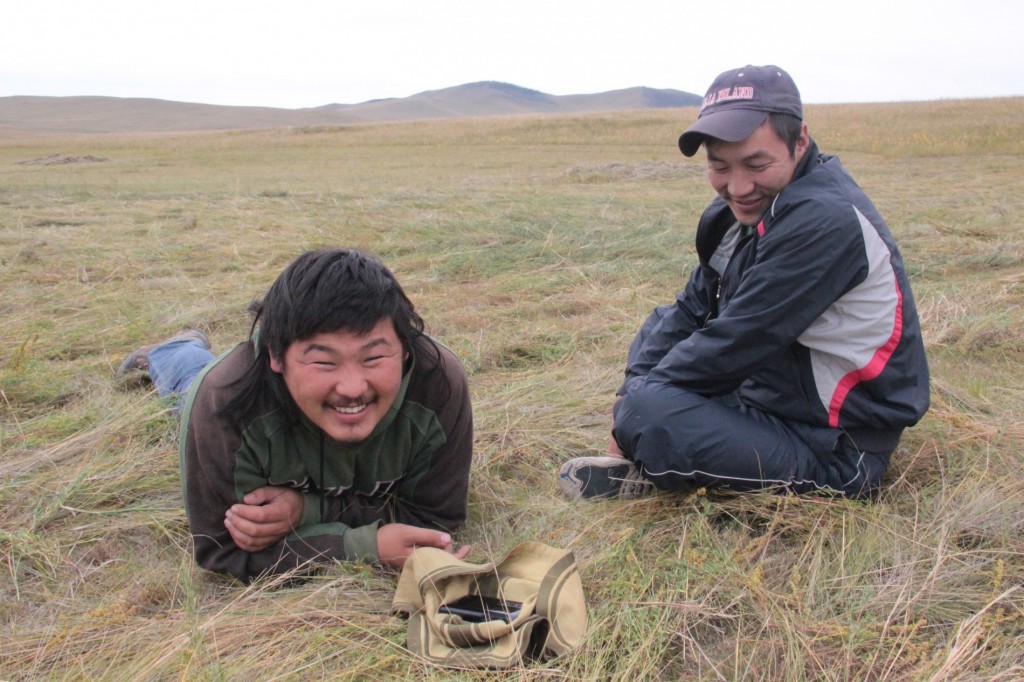 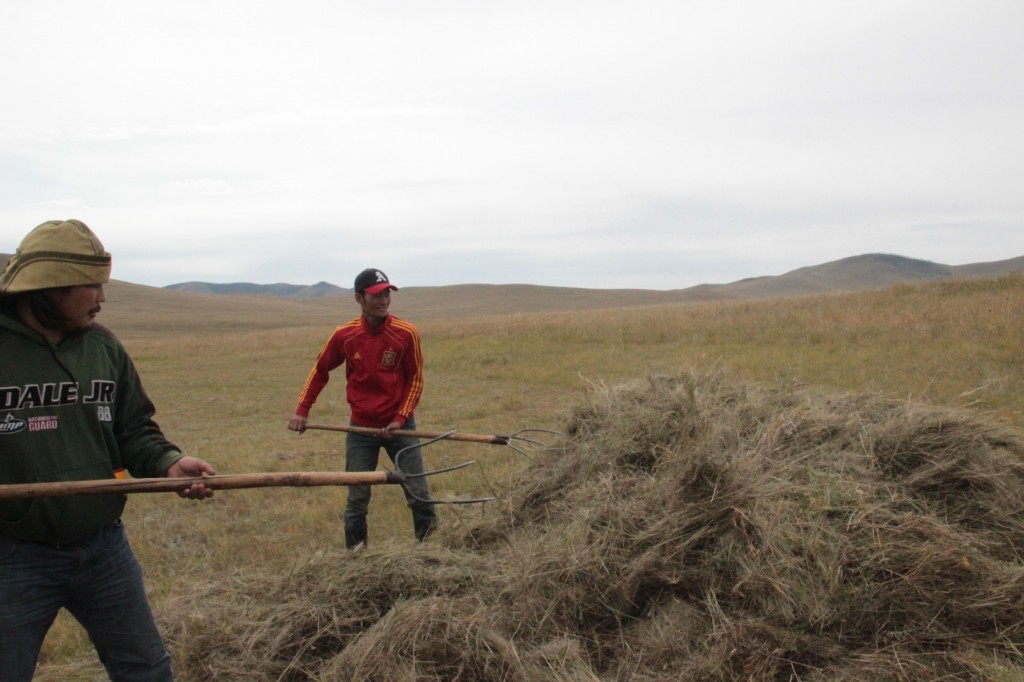 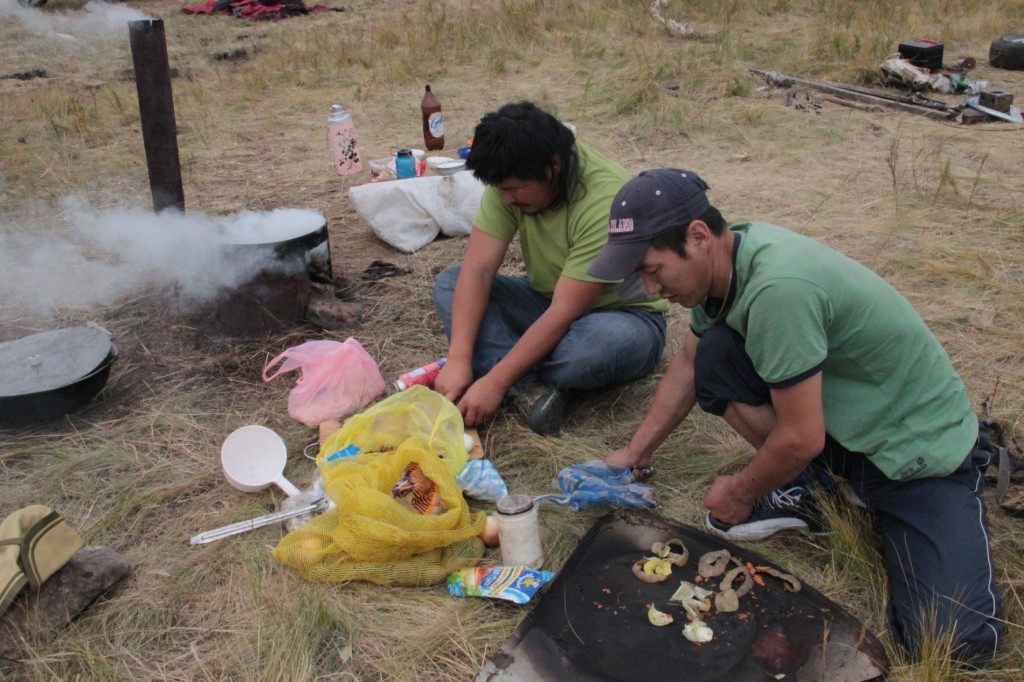 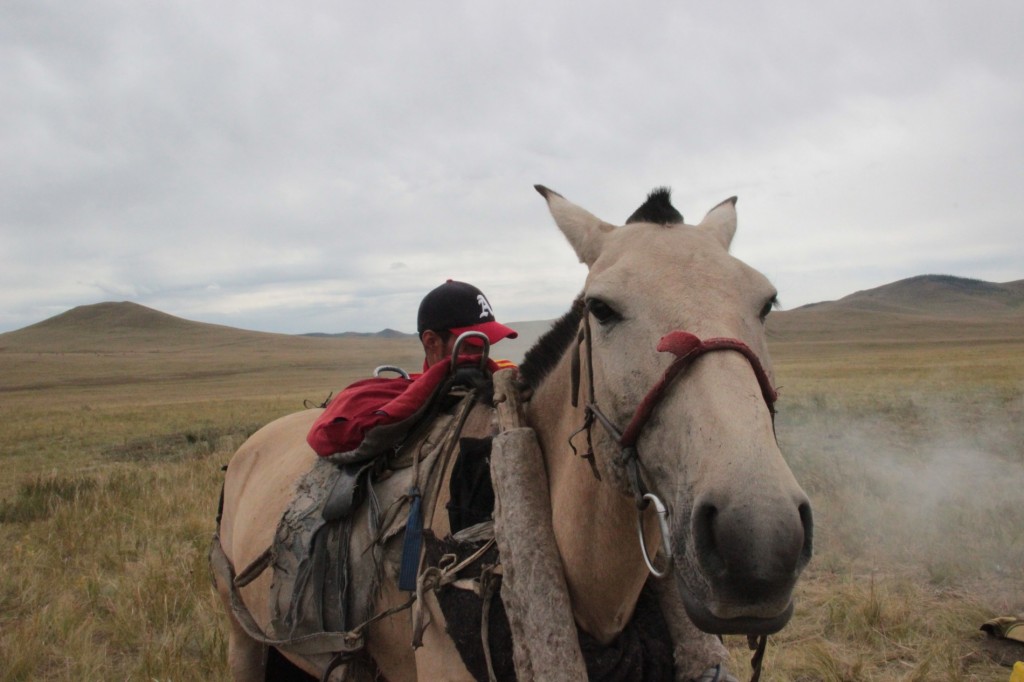 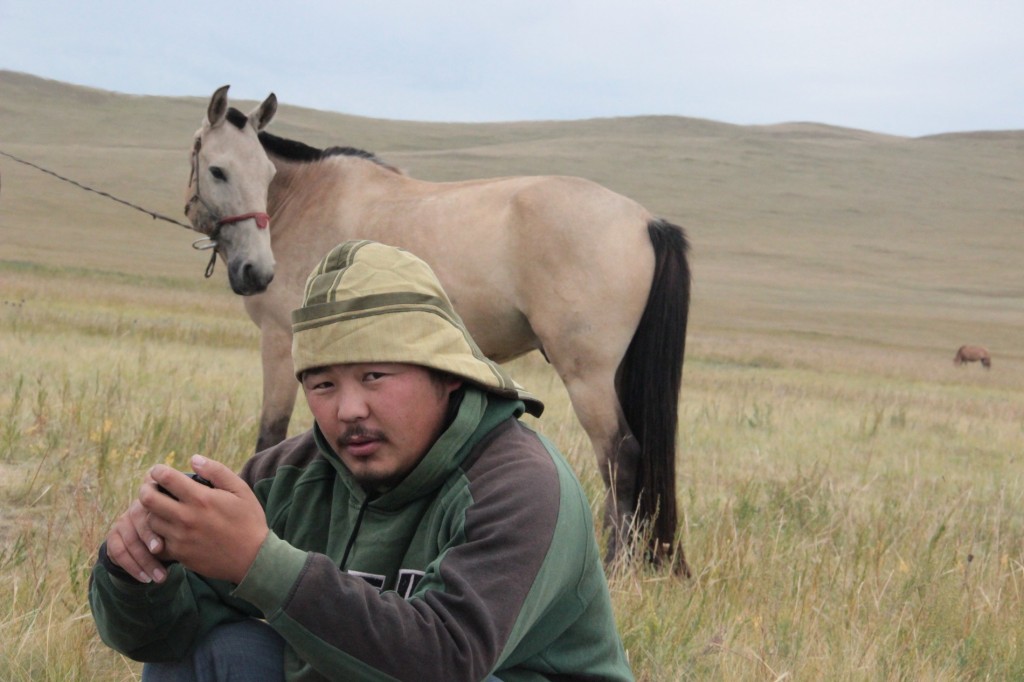 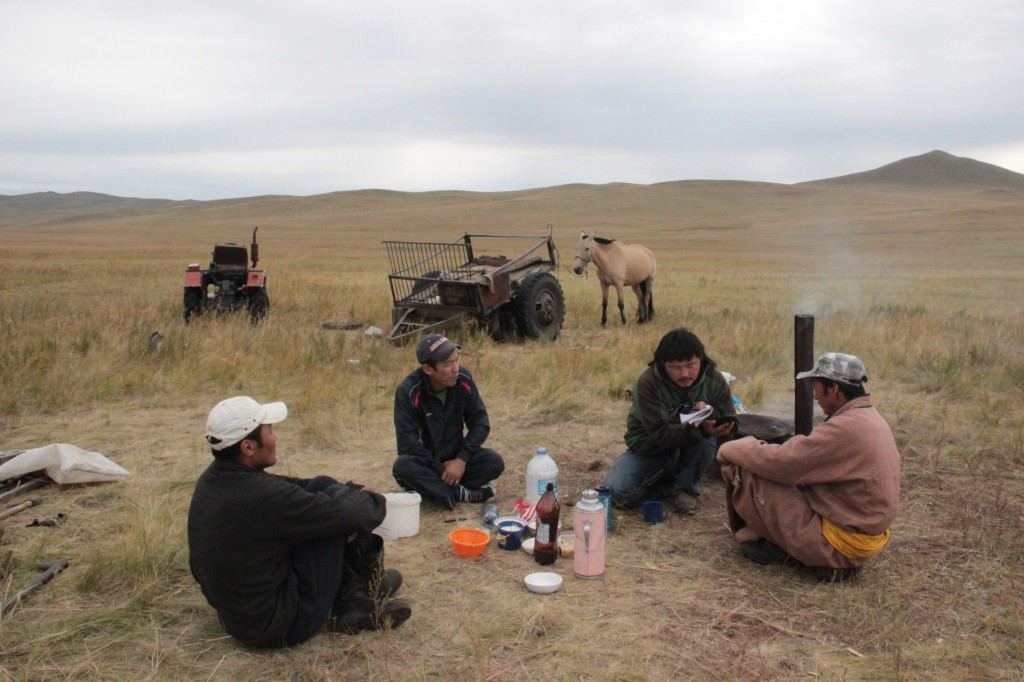 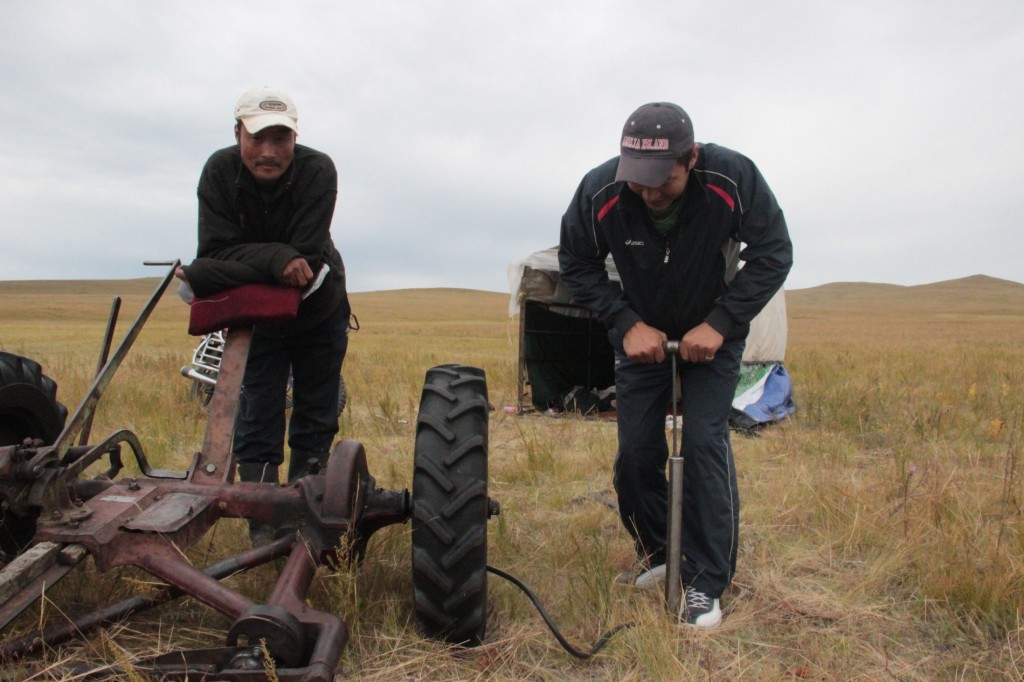 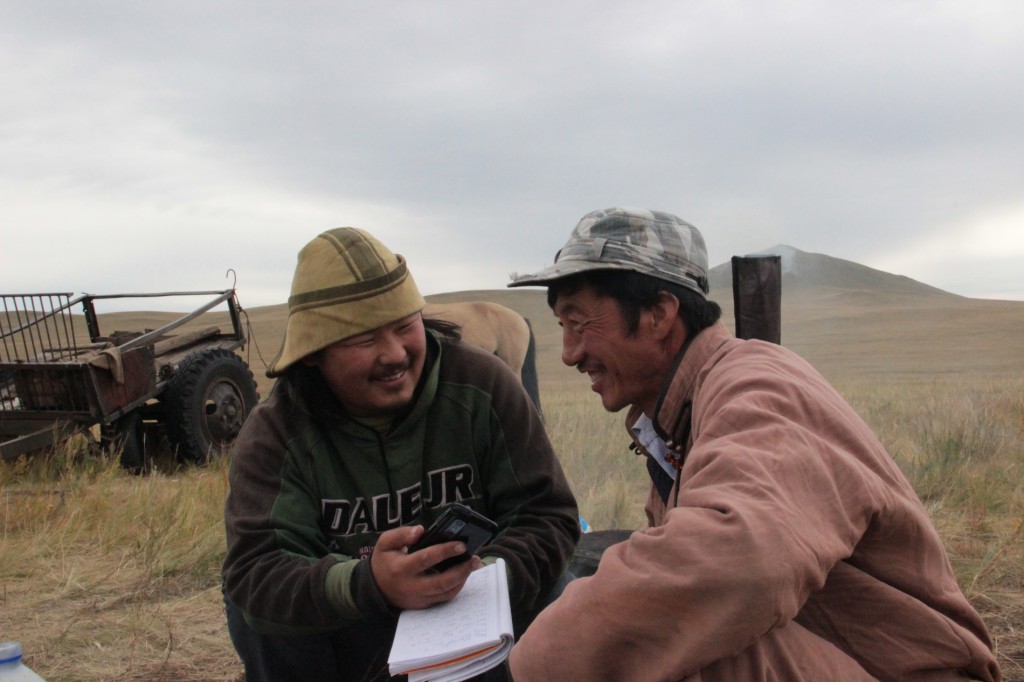 Because my trekking plans were cancelled, my dear friend and tour guide Kishig suggested to make a documentary about the making of hay in the Khentii province. “They still use horses,” he said and offered me to bring me there. I was fine with it. I’d done anything to get out of the dusty Ulan Bator. After about four hours of driving, we pick up an old college friend of his. Mukhan owns a car repair shop and lives with his wife and children in a small town north-east of UB. He knows the people in the countryside and tries for a while to get someone on the phone. Haymaking using horses has become rare, most farmers use machines by now. But he finds someone and the three of us jump into Kishig’s minivan and take off. Of course, not without stopping at the grocery store to buy a gift for the “horseman”.

The farmers in Mongolia live in yurts, there are no street names, house numbers or other address information. So we make our way from yurt to yurt by asking. For instance, a goat-herdess on horseback shows Mukhan the way to the next family. When we ask the cattlemen, a herd of cows is attacking Kishig’s car. In the end, we find the hay crew, but it’s already dark.

After dinner, which consists of hot yogurt with rice and raisins, I hand over the bottle of vodka. It is gratefully accepted. Not enough cups? No problem. With a knife you can turn a plastic bottle into two fine drinking cups.

The group sitting around the camp fire consists of exactly four “horsemen”: Kishig, Mukhan, myself and Boro, one of the farmers. Good thing we bought the big bottle.

Travel Tip: If you are a woman traveling alone, you should prefer not to get drunk. In addition, you should avoid the company of drunken men. Especially, if you are in a remote location, in the middle of nowhere, miles from the next town, in the Mongolian steppe.

Actually, I did refuse the first few rounds. But if you just sit there and don’t understand a single word of the conversation, then you get bored. I ask a few times  what they are talking about. The answer is every time: “racehorses”.

The next few rounds I’m joining in. After all, I’m the one who bought the vodka. The pour is plentiful, and refills get done quickly. As soon as the vodka bottle is empty, someone gets beer in a two-liter plastic bottle. Surprisingly, right then I heard the voice of reason in my head: “Leave as long as you still can!”. I say “Good night” and go to my tent.

But the evening is not over, yet. When I ‘m almost asleep, I hear them calling my name. First, I ignore it and hope that they give up. Mongolians rarely do, also not today. So I unzip the tent door and peek out. Mukhan and Boro are sitting in front of my tent and hand me a bowl with a clear liquid. “Homebrew,” Mukhan explains. Although the stuff comes out of my Nalgene-bottle, it is not water. They put homemade liquor in there! Kishig, apparently, has gone to sleep already .

I pretend to take a sip, return the bowl and turn around to go back into the tent. Boro follows me. “Stop, stop, stop!’ I protest and push him out. He keeps coming. Then I try reason, point at the two and say firmly, “Mukhan wife, Boro wife!” Mukhan translates and Boro tells him something in Mongolian. Mukhan explained to me: “Mukhan wife, Boro no wife ! ” Shit, my argument just lost the grip. Boro starts a new attempt to get into my tent.

Right in that moment, Mukhan says “Good night ” and walks away. “Are you crazy! You can’t just leave me alone,” I call after him. No response.

Boro apparently understands neither “no” nor “stop”, so I try it with an expression that Mongolians use for naughty dogs and horses: “Huusch!” This amuses him, but he does not give up. With a lot of ranting and slapping on the fingers, he finally did give up. This problem would probably have been solved faster, if I had just slept with him.

The next morning, it looks like he is a bit ashamed. He doesn’t talk to me much. At the same time, I think to myself, “he doesn’t even look so bad in daylight.”

In spite of the headache, it is a fun day for all of us. We work a little and Mukhan cooks a great hangover breakfast. Kishig helps with piling up the hay. The farmers are nice and let me steer the hay-horse. I get my photos and even an interview with the eldest. Translated by Kishig himself. This would later require some rework. Quote Kishig: “No, YOUR English is bad, because I don’t understand it!”

Before leaving, we shake hands, of course, also me and Boro. “No offense. Maybe I’ll stop by again sometime.”