In addition to alpine skiing and cross country another winter sports discipline ist getting more and more popular at the Northern Bavarian Fichtelgebirge mountain range: ski touring. For three years, the summit restaurant Asenturm has been a regular meeting point on Wednesday evenings.

Many recreational athletes enter the two-kilometer long tour with 386 meters vertical height only at night, equipped with touring equipment or snowshoes, but definitely with headlamps. At the top you will find a warm meal, Franconian beer and a warm atmosphere.

The skins make a smacking sound when I pull them apart. However, it is not glue that holds the surfaces together, but pure adhesion forces. Therefore, the manufacturer has called them “Gecko” as the little lizards that even stick to the ceiling upside down with their bulbous toes. In line with this, the hooks for attaching the skins to the boards are designed like lizards feet. When mounting them I am so concentrated that I too late notice the rustle behind me. A small gust of wind blows away the bag in which the skins were kept. I jump up and run after it.

With snowboard boots on, I’m not very articulated and my steps look like jumps from the moon landing. Every time I bend down to grab the bag, it slips a little further. “Hopefully nobody is watching”, I think. There are not many people at the cable car station in Bischofsgruen, because it is late afternoon and the chair lift will close soon. I continue hopping after the bag until luckily it gets stuck on the back of a small child sitting in the middle of the runway. “Catch it!” I shout. The hooded head turns around slowly. Before the boy realizes what’s going on, I take the bag, put it in my pocket and dedicate myself again towards the snowboard.

The ski areas in the Fichtelgebirge are not nearly as large and diverse as in the Alps, but the prices are low. This is why many parents come here with their children to train for skiing holidays in Austria. At the north and south face of Ochsenkopf mountain there are the longest slopes in the area. Both are about two kilometers long but they are not very steep and a bit boring for advanced riders. 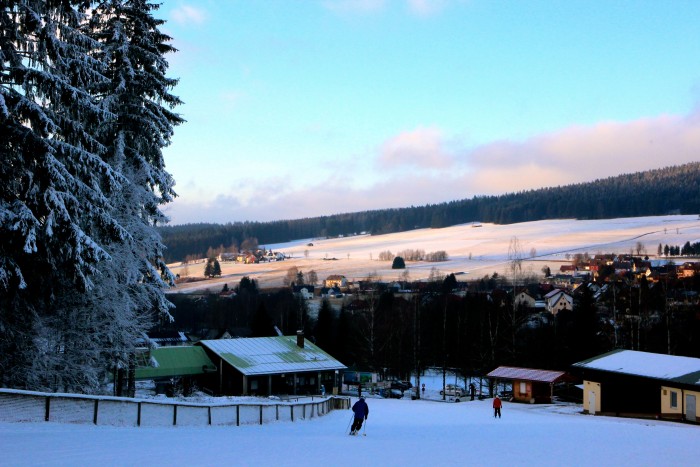 In recent years, the tourism industry has been working to rejuvenate the image of the region, for example with a mountain-bike-enduro-race in the summer. The operators called the location not by its German name “Ochsenkopf” but by what it translates to in English: “Bullhead”. I like the English term better and it also seems to fit well, when it comes to another popular sport that became more popular in the last few years: ski-touring. I’ve heard, every Wednesday evening tourers from the area meet at the summit restaurant called Asenturm.

Ski touring in Upper Franconia?! Of course, I’m curious. However, I have no touring skis, but a split board, a snowboard that can be taken apart. So-called Voile units make it possible to turn the bindings, so you can walk uphill. For riding downhill you simply put the board back together. But first I must get to the top. The ascent will take three quarters of an hour, so I was told. There is no extra trail for the tourers, so I have to walk along the slopes. In order not to be an obstacle to the skiers, you should not start until late afternoon.

When driving here, I noted with regret that there is not much snow – again a mild winter and probably not the last one, if you believe the climate researchers at the nearby University of Bayreuth. Here at Ochsenkopf mountain there is plenty of snow even on the pine branches. This is when my winter feeling kicks in. Thanks to an entire battalion of snow guns. As I trudge up, the last skiers and snowboarders are carving past me. It is now half past four and the base station is closed. When it’s quiet again, I turn around a few times and admire the view of the valley – not so bad when you consider that you are not in the Alps. 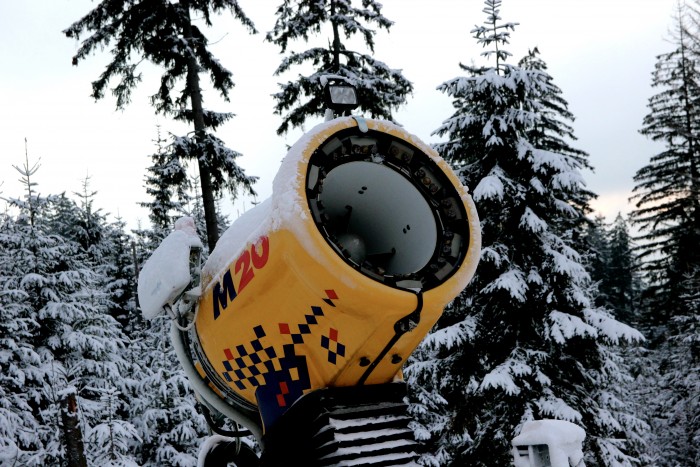 The evening light bathes the scene in a golden, then in a purple haze. I am so busy with photography, I barely notice the group of four that is walking up the mountain behind me. I cringe when they call a greeting. Then I wave back and ask if they are also on their way to the restaurant. “Sure, we’ll see you up there.”
I’ve been walking for an hour. The summit cannot be too far anymore. Behind the next bend I still cannot see it, not even after the next but one. It’s funny, if you ride up with the lift, you’re there in less than five minutes and it feels like such a short distance. However, now that I walk, I realize how far two kilometers uphill actually are.
Now dusk sets in. Suddenly a loud hiss breaks the silence. I turn around to check the surroundings, but I cannot where the noise comes from. Then the flakes raining down on me. Ah, they have started the snow guns. I have to switch sides, so that I can walk close to the spraying units under in order to not get snowed in. After 20 minutes, I can see the lights of the summit house and put up a notch.

Once at the top, I’m drenched in sweat, though the tour is not very difficult, but it is still sporty. 386 meters vertical height, it is up to the Asenturm, 1,024 meters above sea level. In the dining room there are only about a dozen people sitting at the tables for the time being: the group that I met before and a few older men. I take a seat and order a currant juice and the innkeeper – because we agreed on  meeting here me. 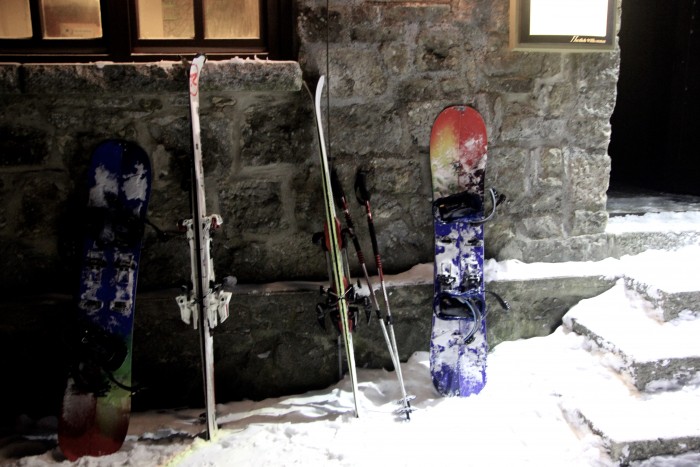 A short time later Martin Reichenberger in cooking shirt and contactors is sitting at my table. Originally he is from the neighbor town Fleckl.  The restaurant Asenturm he has been leasing for 19 years. Three years ago, he started the restaurant to open once a week to ski touring evening, until 22.00 o’clock rather than on other days to 18.00 o’clock. “I saw that they have offers like this in the Alps and thought: I’ll give it a shot,” says Reichenberger. According to him, the ski touring evening is well received. More and more people, especially younger ones see the touring as physical exercise after a long working day. “Many make the tour twice or three times and then stop by – depending on their fitness level,” says Reichenberger.

Even the German Alpine Association (DAV) is interested in touring at Ochsenkopf mountain, because the track is perfect for beginners to practice. The DAV-mountain guides who come here are from the sections Kulmbach, Bayreuth and even from Amberg. They gave Reichenberger advise in finding solutions together with the cable car operators so as to avoid dangerous encounters with groomers. Usually they prepare the route in the evening – but on Wednesdays only after 22.00 o’clock. In case of storms, the ski touring evening does not take place and the restaurant is closed. If the weather is bad, you best call the Asenturm or look it up on their Facebook page, says Reichenberger.

The Touring season at the Ochsenkopf begins in early January and sometimes takes even until Easter. The innkeeper is sure, the trend sport will become even more popular in the future and is already thinking about a second touring evening on the weekend. “Everyone is welcome, for example snowshoers. We’re aiming to have a nice evening in good company, “says Reichenberger. He would also like to try the ski touring himself, but he lacks the time, because he is busy with catering for the winter sports enthusiasts. Among other things, Currywurst with fries are on the menu, as well as warm apple strudel and of course Franconian beer. 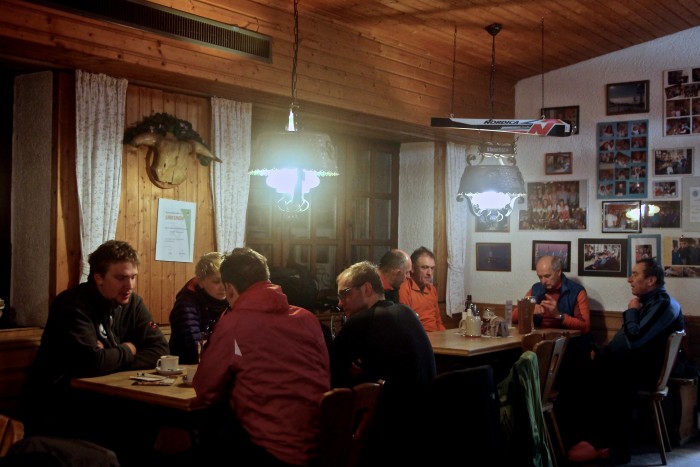 Meanwhile, it is 19.00 clock and gradually more and more people in ski boots come in. All of them are greeting friendly before they sit down. Then you hear the clinking of beer mugs.

A group of older gentlemen has sat down at the next table. They ask me to join them and I take the offer. “We came here by car,” laughs one, “but don’t tell anyone.” They did not want to carry the heavy instrument all the way. He also tells me, the man with the mustache is a gifted accordion player and today would provide a little extra entertainment. 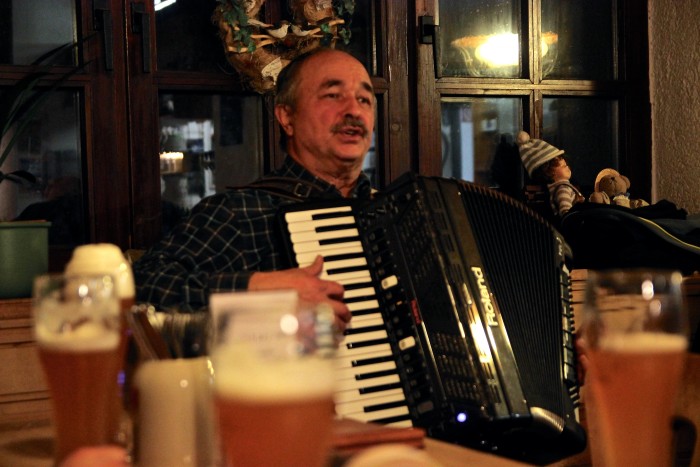 Relaxed with a cup of hot cocoa, I listen to the accordion versions of, inter alia, “Let it be”, “Skifoan” and “Furstenfeld”. The dining room is now jam packed and the service is already making opening up a second room. I could definitely stay longer, but unfortunately I still have a long way home ahead of me. Therefore I say goodbye to my new friends and ride back to the valley in the light of the snow guns. Even down at the parking lot I still see people with headlamps coming towards me. Apparently, they are starting the tour just now. A bit of adventure sports and a cozy atmosphere – I now understand why the tour to Asenturm is so popular.