An American guy on the train told me: “Don’t stay too long in UB.” I wasn’t planning on, but I ended up staying over a week and a half in Ulan Bator, the capital of Mongolia. Why? – Circumstances.

Now I’m sitting here, in Sun’s Nomads Guesthouse (10 U.S. dollars per night with breakfast), located directly on the Peace Avenue, and I’m completely exhausted. I suffered nervous breakdowns more than once during the past few days. 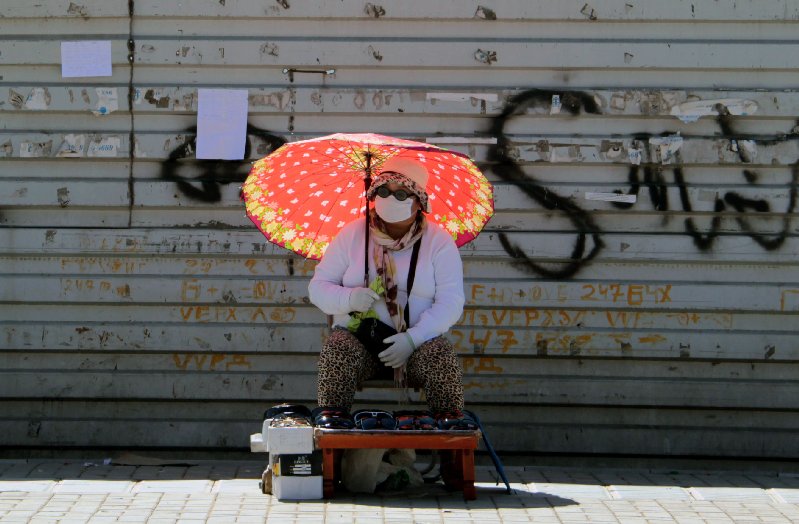 Woman by the Street 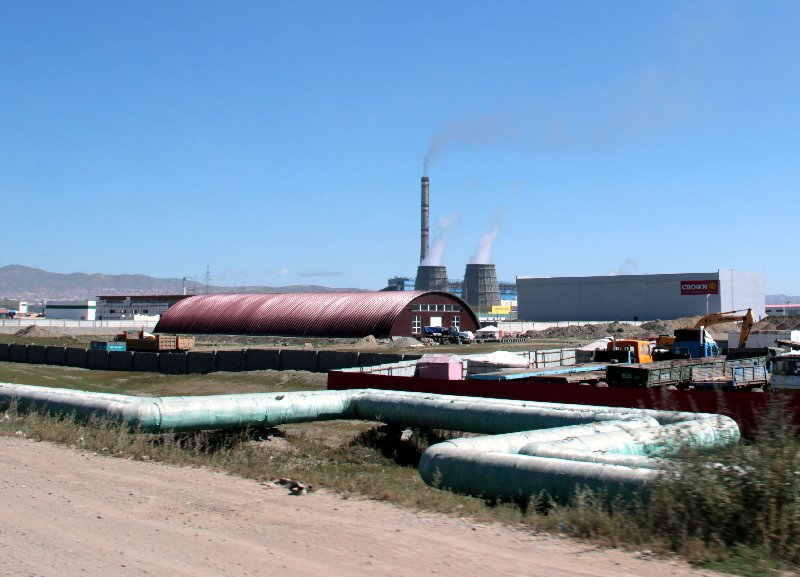 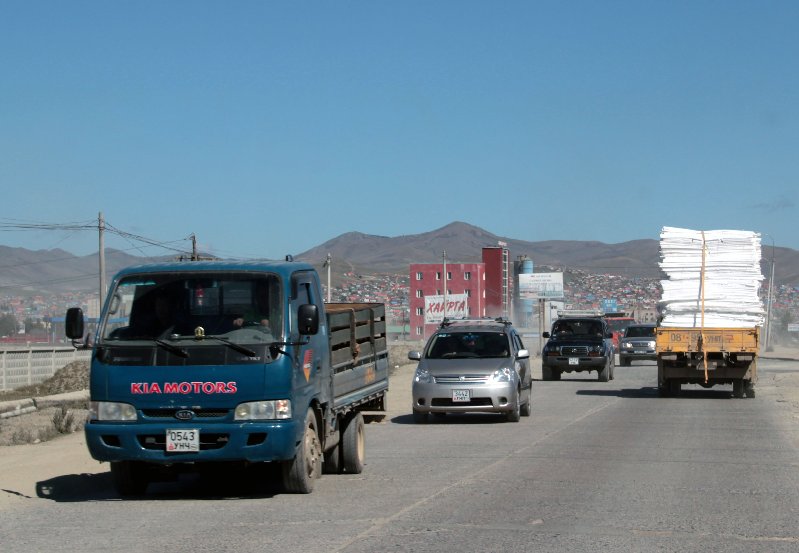 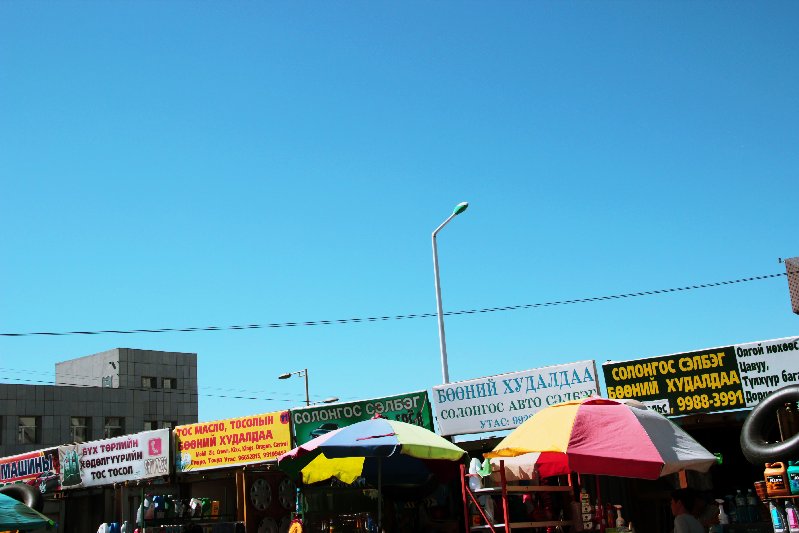 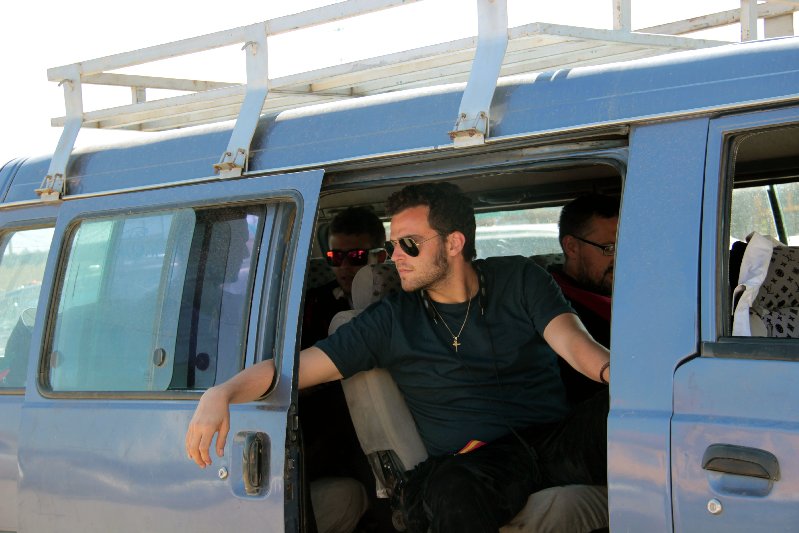 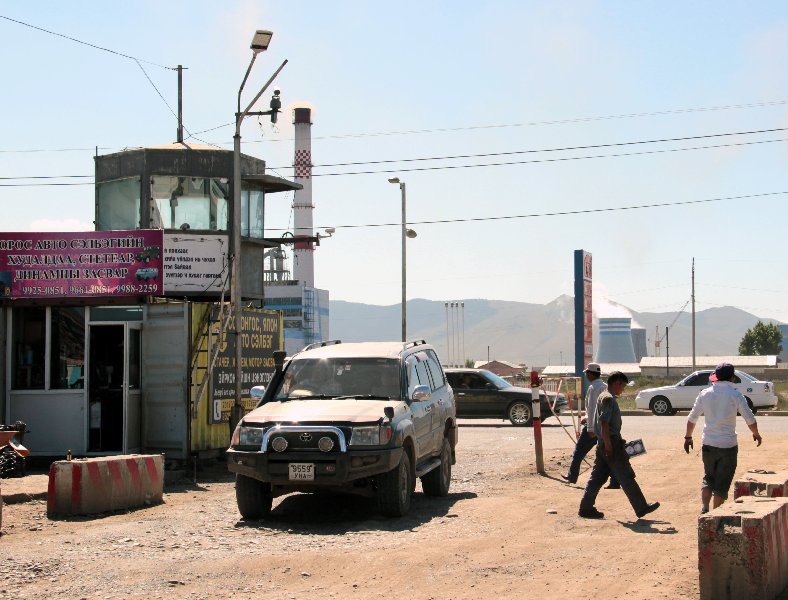 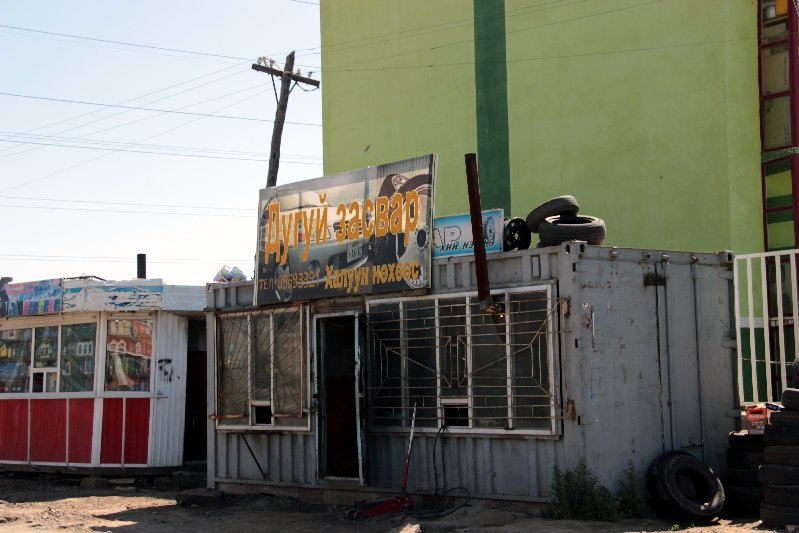 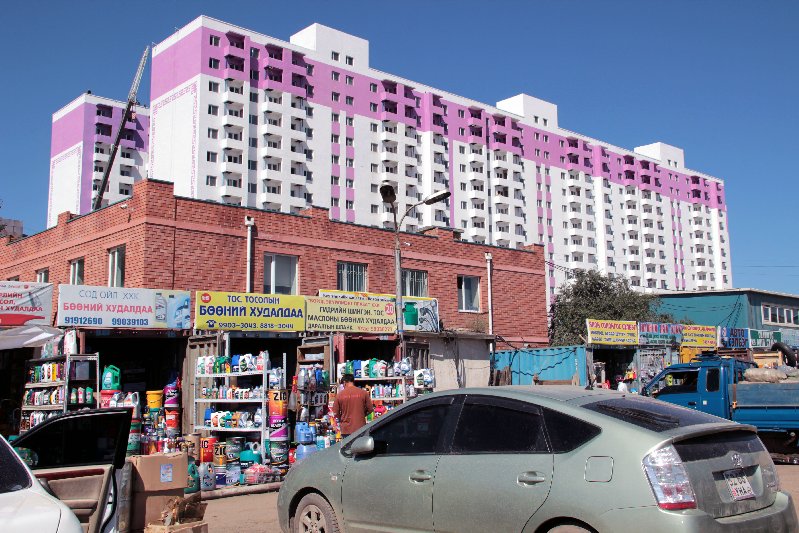 At the car repair 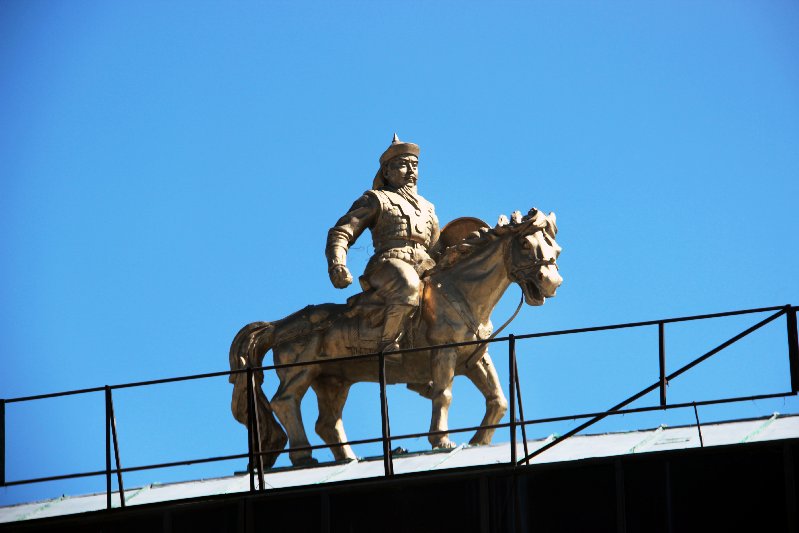 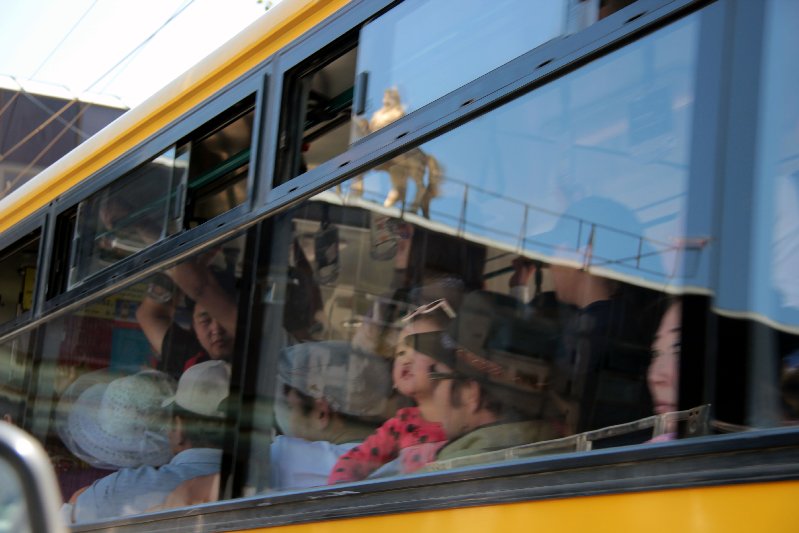 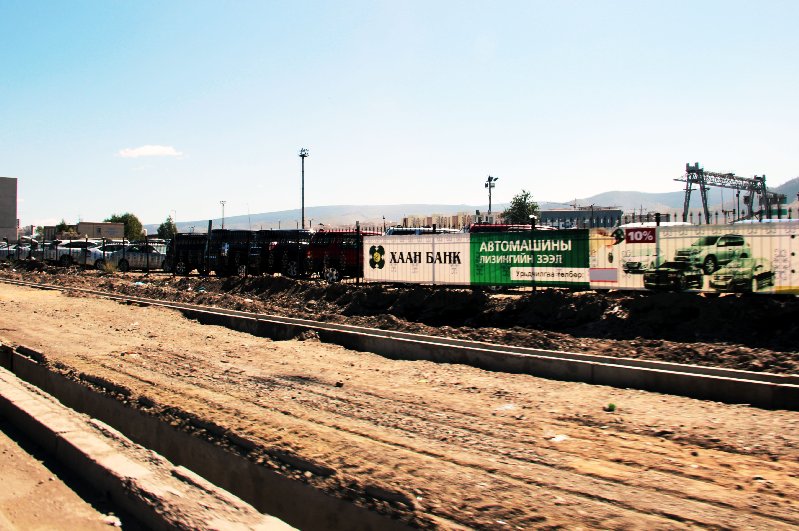 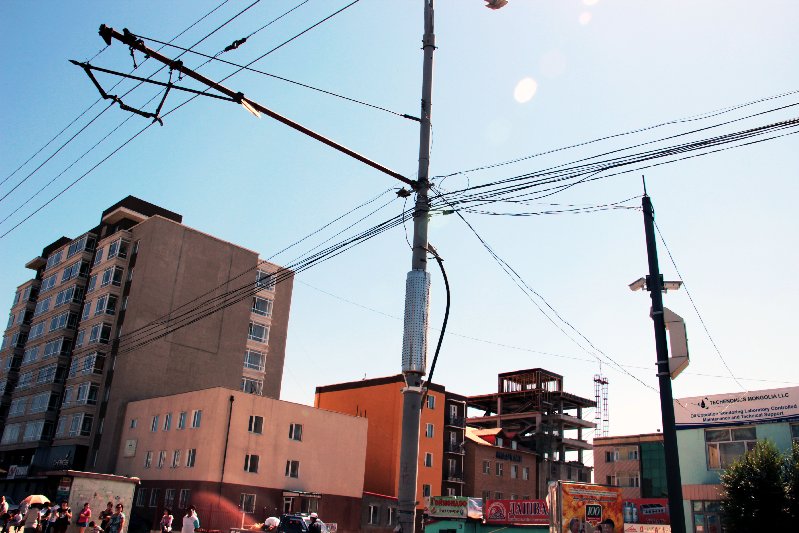 By the Road
Oogi's Place 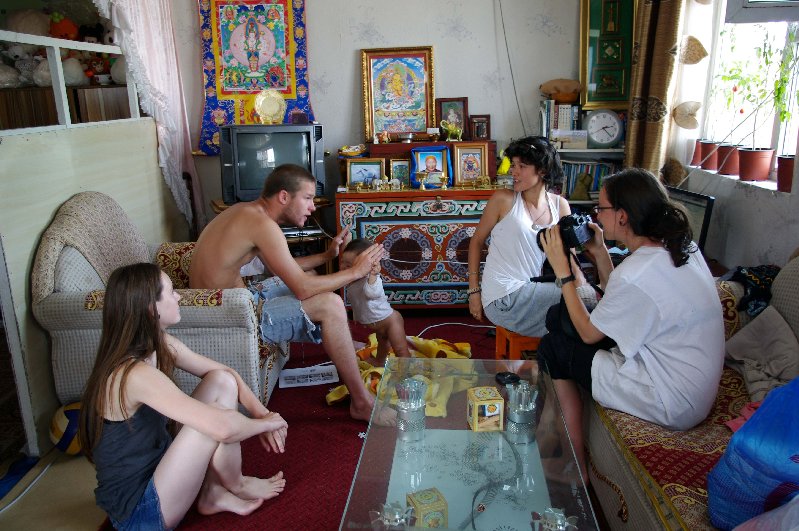 The bureaucratic field trips of this week would have been tiring enough already. To communicate in offices, in a language you do not speak, costs even more energy. Additionally, there is noise and bustle on the streets. Ulan Bator is booming right now and there are construction sites all over the place. That means jackhammer and drilling everywhere, all day. The traffic is chaotic as usually in Asia. Car horns are very popular and they are being used frequently, around the clock.

The trouble started with my visa extension. My “Tescher” guidebook for Mongolia from 2010 did not know that the visa can be extended only with the immigration authorities in the vicinity of the airport. No longer can it be done at the Foreign Office in the city center. After the 45-minute quest for the bus (as usually, see Irkutsk) followed by a 45-minute bus ride, then again searching for 45 minutes without success. In the end, I got frustrated and stopped a taxi, took a ride around the corner, paid a lot of money for it and got angry. The anger grew, when I was told at the office counter that I’d need a passport picture. So I was fighting my way over piles of rubble and broken fences to the next bus stop, to go back to town and take passport photos. When I went back the next day, I found out that it was Saturday and the Authorities were closed, of course.

Travel Tip: It’s easy to forget the date and day of the week, when you’ve been traveling for a while. Be aware of this fact and try to recall the date every now and then.

another Travel Tip: If you need a ride, just stand beside the road and stretch out the arm. Usually it’s not taxis that stop, but ordinary people who want to earn some extra money. The prices can vary. A guideline is: 800 Tugrik per kilometer. Whether you want to get in the car with a stranger, is up to you.

The first week I stayed with Oogi and her family. The 25-year-old Mongolian studied geography and lives with her husband and two young children in a yurt suburb on the outskirts of the city. Their home is quite authentic and has no water pipes or sanitation build in. Drinking water is collected in canisters from a central water station. Showers are two streets away and cost 2000 Tugrik (equivalent to about 1 euro). The toilet is an outhouse in the garden. For the couchsurfers there is a yurt in the yard.

For Oogi CouchSurfing is a great way to improve her English and learn about other cultures. Her children are still too small for her to go traveling. The three-year old Chorma is very open and like to play with the guests. She already knows a few words in English and also, how to “high five”. Oogi’s seven months old son laughs a lot and very rarely cries. At night the whole family sleeps in one bed. Compared with the western culture, the people here live with less luxury, but are a lot richer in many ways.

The Buddhist religion is important and traditionally, every family has a shrine in the house. On one of the pictures on there could be a recently deceased relative or an animal that was important to the family: they are good spirits who protect the family.

Oogis husband Kishig is an outdoor guide and instructor with its own horse trekking company in central Mongolia. Oogi and Kishig are, how many Ulan Batorians, originally from the country. In order to give their children a good education and to lead a more comfortable life, they have moved to the capital.

In Oogi’s house it’s very warm and hospitable. As soon as you sit, you already have some food in your hand. The meat here, mainly cattle, sheep and goat tastes like wild animal, probably a result of permanent free range. Other couchsurfers who stay here are mostly French. But sisters, uncles or cousins also often come by to visit. It is often difficult to remember all the names. Mongolian pronunciation of the sounds is very distinct and sounds a little like Chinese, but it is written in Cyrillic letters, like in Russia. Many people don’t speak English, and if they do, then usually only a little. But there are also many young people who had some time abroad and speak the language fairly well.

In order to do a trip to the country, I wanted to buy a few things on the cheap “Black Market” and find out the prices for saddles, horses and equipment. I’ve been thinking that my chances with speaking only English will be equal to zero. Therefore, I hired an interpreter at the tourist office (30 000 Tugrik for the day). Dava’s in her early 20’s and studies Business Administration in Vienna. She helped me a lot and so the shopping tour in the bustle of the huge “black market” cost me only a fraction of the nerves of the usual. Anyone who knows me knows shopping is torture for me.

The next day, I went to the Kazakh Embassy to inquire about visa options. After Mongolia I wanted to travel to Uzbekistan, but the Internet has only flights from Ulaanbaatar (UB) via Beijing, which is in the opposite direction. Travelers have told me of an airport in Ölgii, in the far west of Mongolia, which offers flights to Almaty, Kazakhstan. I went to the Kazakh embassy to ask if I need a transit visa. Of course, it was a mistake to assume that all authorities open at the same time. I had to wait an hour in front of the embassy. Incidentally, the Kazakh Embassy has moved to the suburbs and is not, as described in Tescher’s guidebook from 2010, in the city center.

I wanted to pass the time taking a few photos of the area. Construction sites as motifs, there are always plenty. Suddenly a car stopped and three police officers got out: It’s not allowed to take photos of construction workers. Then Passport control. One of the policemen was holding my passport in his hand and asks me about my details: Name? Arrival date? Passport Number? I thought: “Who remembers his passport number? He must be fooling me.” He actually is. Five minutes later, we smoke his cigarettes and have a conversation. He: three words in English. Me: three chunks Mongolian. He asked, if I was married and if I had a phone number …

In the embassy they weren’t so friendly: there is only a 30-day visa and it costs 30 dollars. The processing will take five days. No way, I’ll stay another week in UB. I shouldn’t need a visa if I don’t leave the transit area of ​​the airport. Well, we’ll find out. Maybe I won’t even come that far.

Last but not least: the great financial crisis.

1st Problem: The whole time, I thought, I could withdraw a larger amount from the ATM at once to save the transaction cost – this I thought. The limit on cash machines are 600 000 Tugrik per day (except at the Xaan Bank, there it’s 800000)

2nd Problem: Only the machines accept the Maestro / EC-card, banks don’t, although you can withdraw higher amounts inside the bank.

3rd Problem: Inside the banks you can withdraw money using MasterCard or Visa, of course not without pulling a number first and plenty of waiting.

4th Problem: Withdrawing money with credit card only works if you have the PIN. I had forgotten mine already many years ago. Probably it would have been a good idea to take care of this issue sooner.

5th Problem: time constraint. My bus leaves tonight and in the country, there is no way to solve these technical problems.

6th Problem: I can explain the situation to anyone, because no one speaks English.

So, once again, the “cluster fuck” is complete.

Travel Tip: In such situations, crying helps to relieve the pressure … alcohol as well for that matter. Neither of them contributes to solving the problem. So just take a breath, stay calm and carry on.

At the end, the PIN emerged in a desk drawer at home in Germany. Of course, this happened on a Friday evening – tomorrow the banks are closed. Of course.