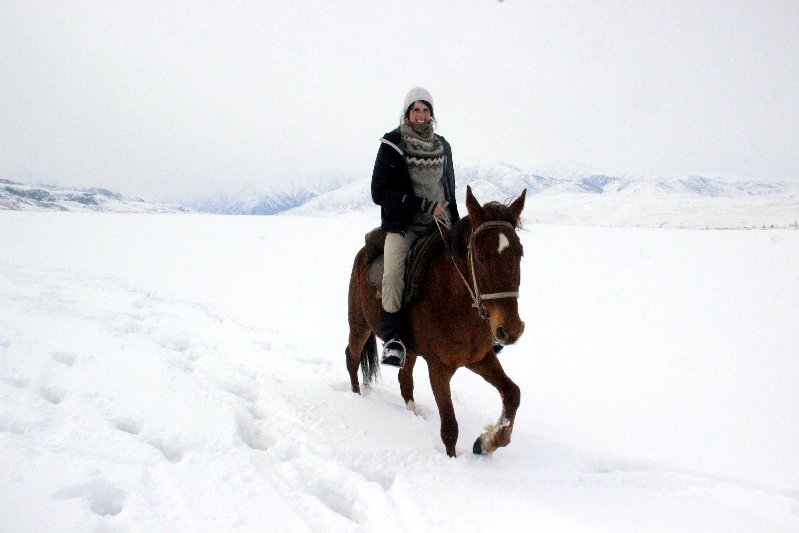 Actually Lisa was just looking for a horse sharing set-up, now she is a farmhand. How it happened? – She took the Mashrutka to the village and asked her way around. Speaking Russian clearly is an advantage. A woman from a shop introduces Lisa to Sahid. He owns a farm near Kashka Suu, about half an hour away from Bishkek. Sahid is happy about the visitors, but makes it immediately clear: He cannot pay any money for the help, but Lisa may ride the horse in return. 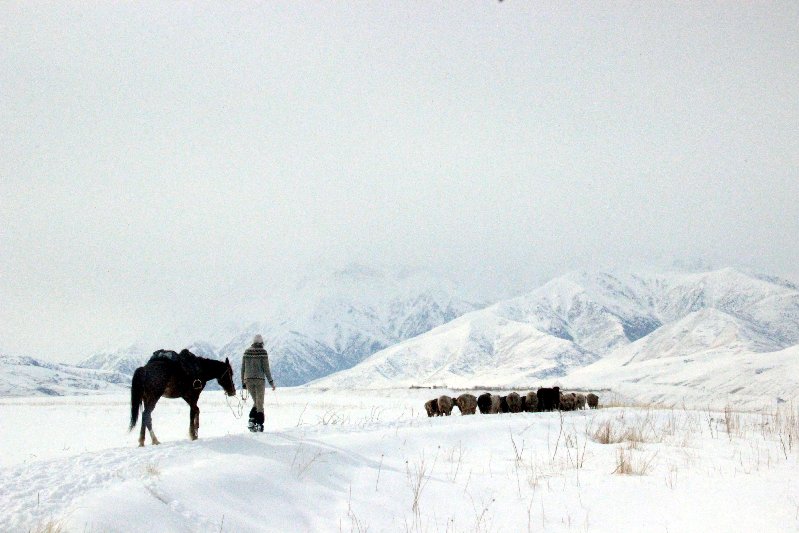 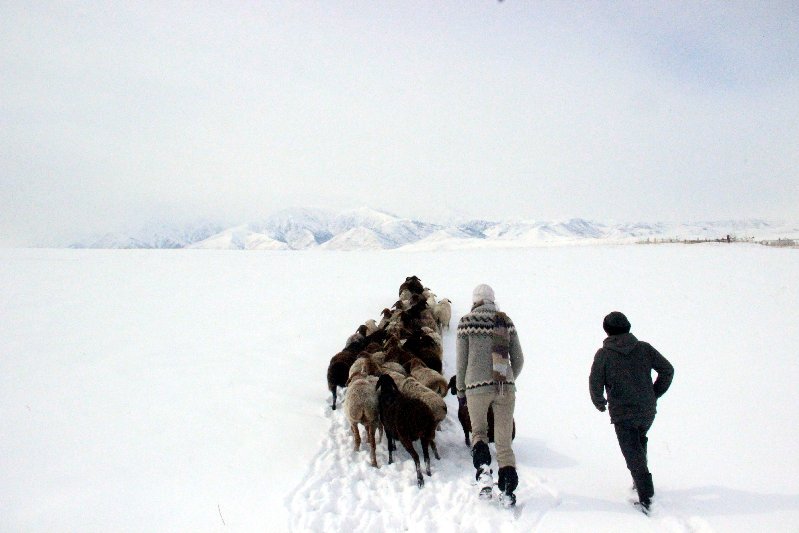 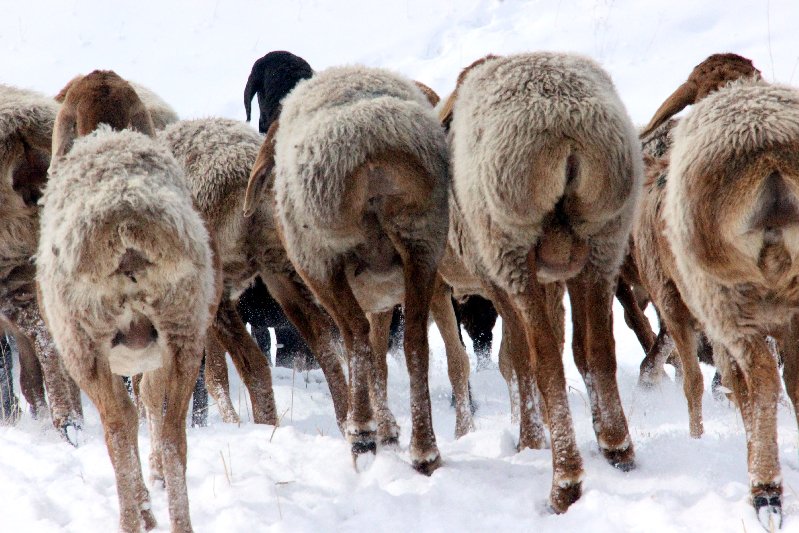 When Lisa and Askhat, the other farmhand, get to the pasture, they discover a newborn lamb. Because it is too cold in the snow, Askhat carries it to the stable. Its mother runs along baaing. As Askhat comes back, him and Lisa jointly drive the herd to the water in the valley. 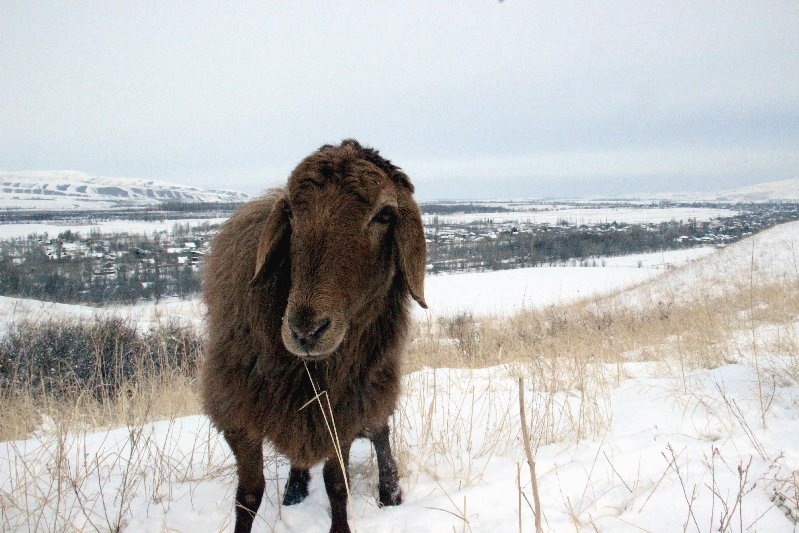 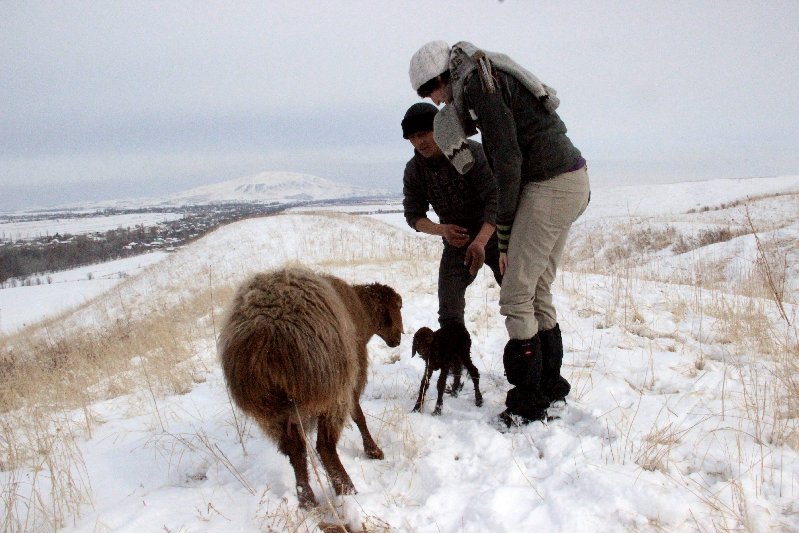 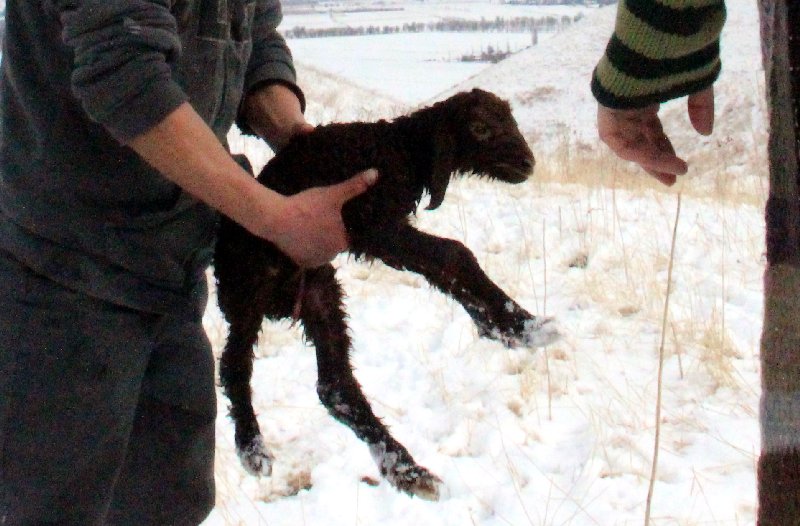 On the farm, there is only one trained horse, a three-year old chestnut whose name translates to “Grey”. The “Grey” has a full-time job, because he is needed for herding sheep and horses, for fetching water or for running errands in the village. However, he does not look like he is overworked. In contrast, it even seems like fun for him. Sometimes he even nips a sheep in the chubby butt to push it forward. 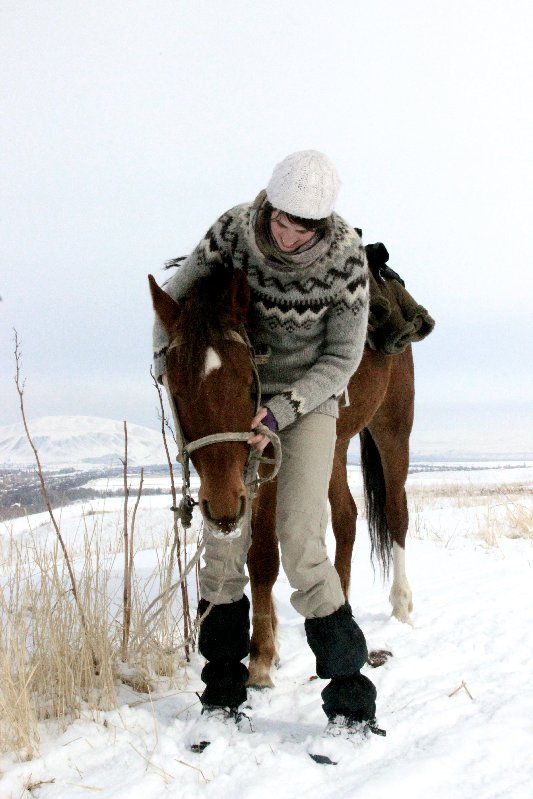 On their way back, Lisa and Askhat see Sahid’s horses. The herd should just consist of mares and a few yearlings. Askhat starts cursing, when he sees that a stallion has sneaked in. The perky black horse belongs to a neighbor and probably has escaped. Some mares are in heat and are supposed to be covered by the expensive stallion at Sahid’s stable. Therefore, Askhat is trying to scare away the intruder. “Lover go home!” he shouts in Russian. But the stallion has no intention to abandon the newly acquired harem and keeps returning. 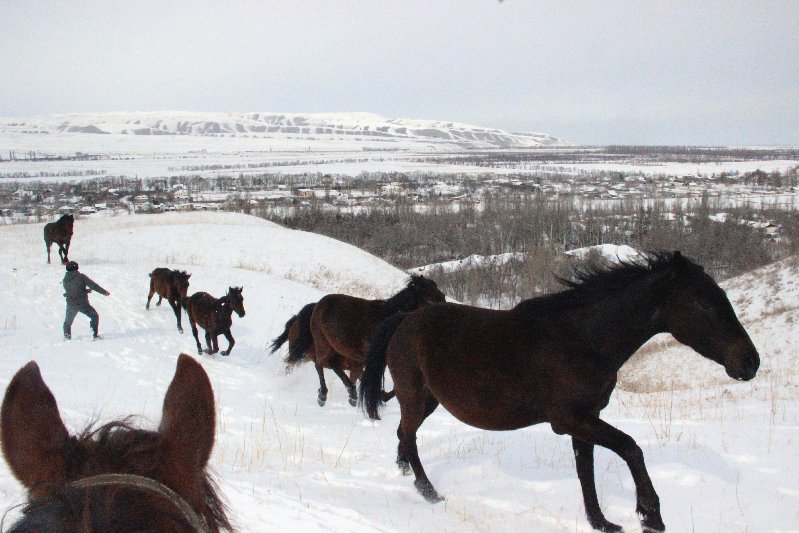 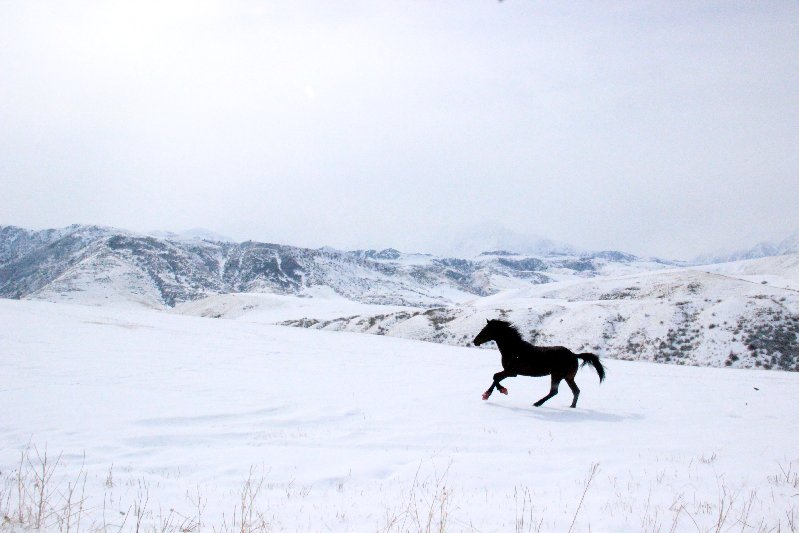 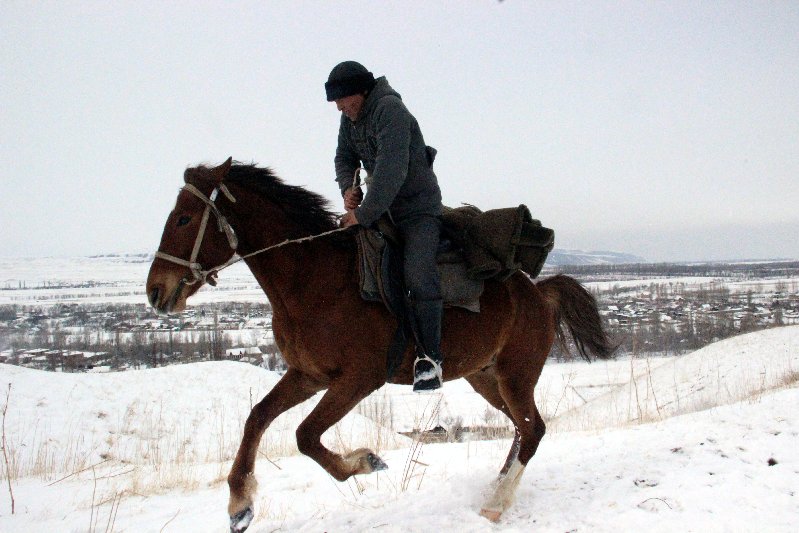 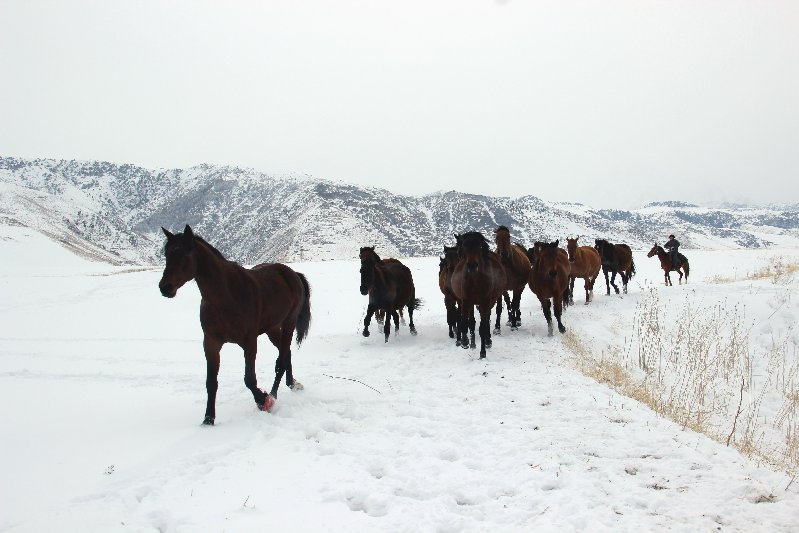 Akhsat remains just as stubborn as the stallion, he just changes his strategy: He drives the herd down to the barn, where the intruder is captured and detained. The stallion is not a sore loser and remains quiet, when the mares move on. Sahid comes out of the house and starts ranting. First he rants at Askhat because he was gone for too long and then he rants a little at the troublemaker. 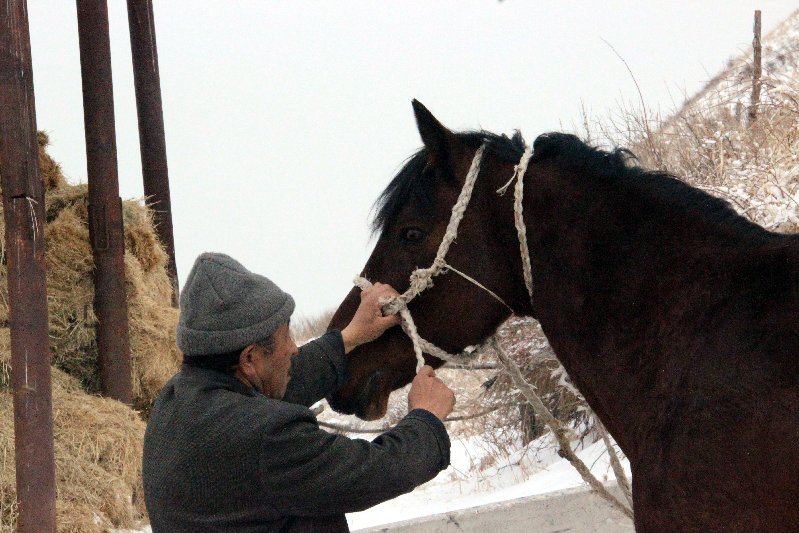 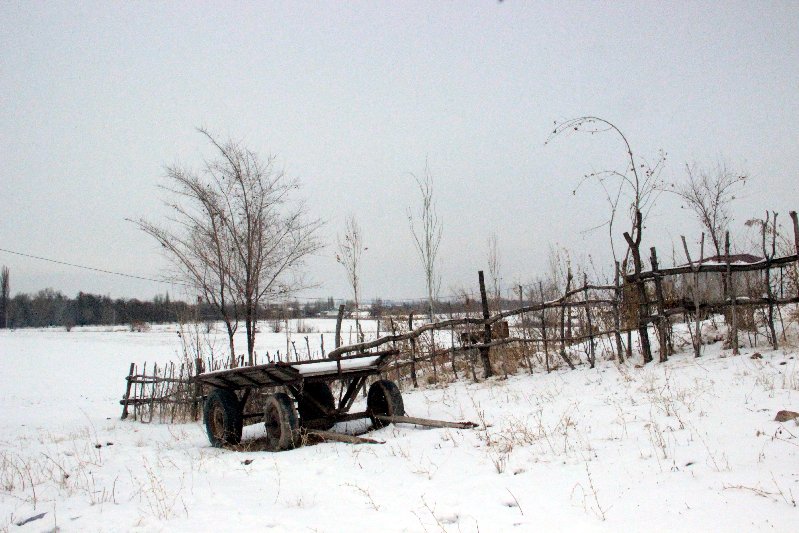 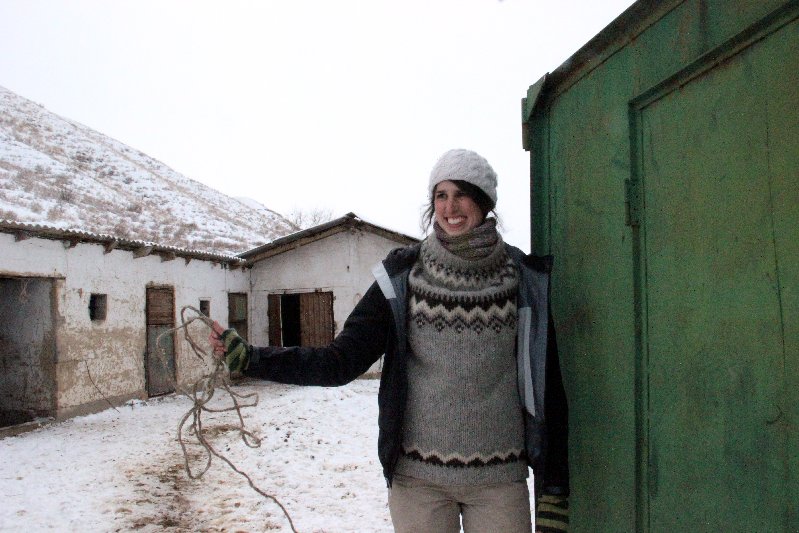 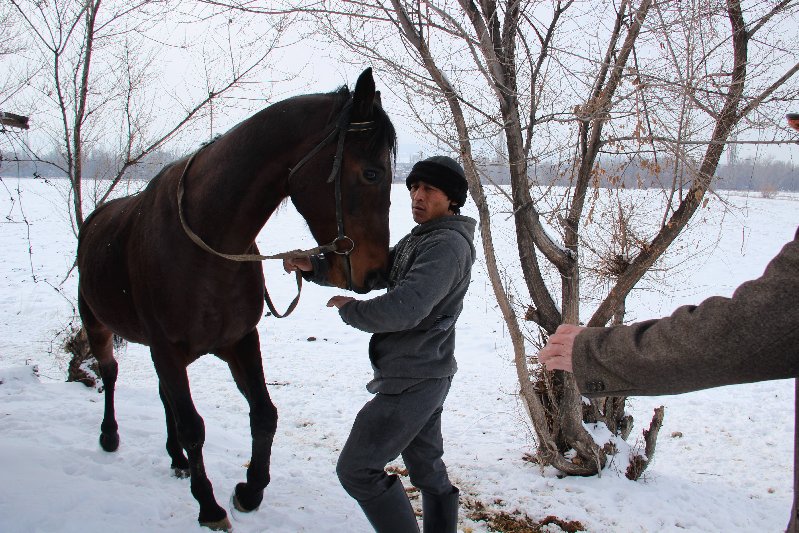 The picture shows Sebastian, Sahid’s expensive European stallion. Because he is so valuable, he has to stay in the barn all day. He gets out of his box only for sex or for a daily slow-paced ride. There is no saddle for him. Lisa, who by now jumps on the on the horse almost like a Kyrgyz, assures that the animal is very well-tempered. 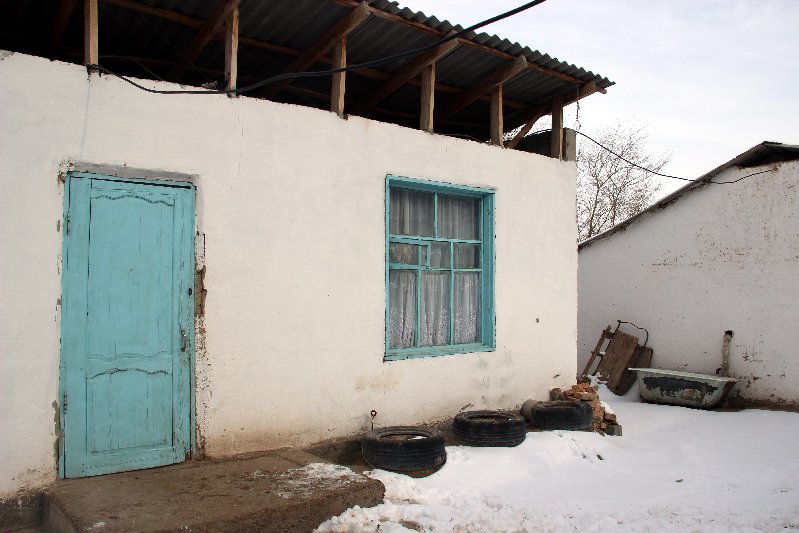 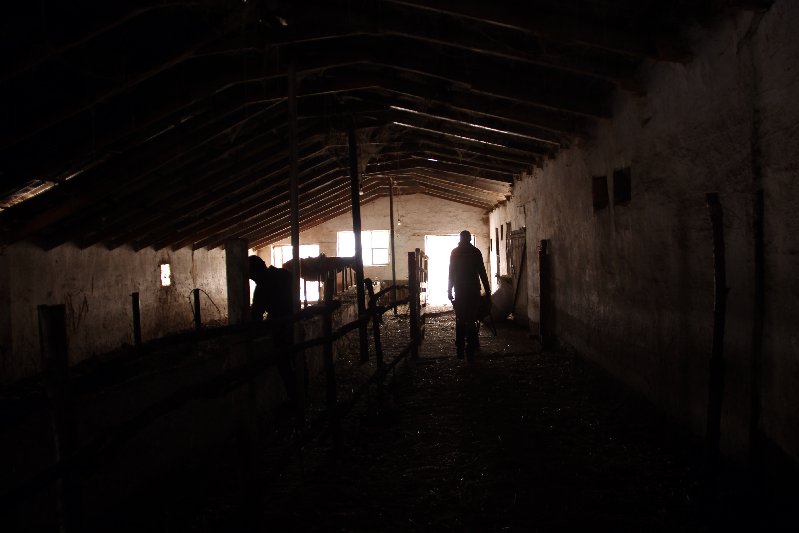 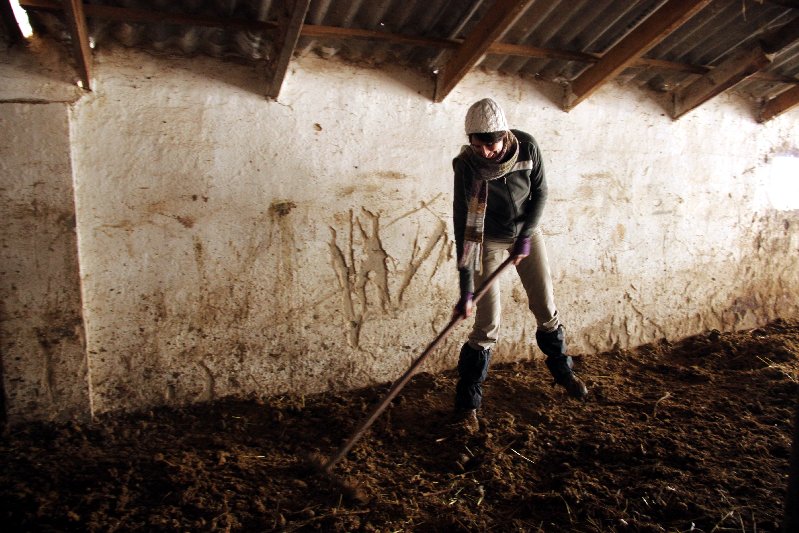 Mucking out the barn saves Lisa the gym. In addition, she has always enough space in the Mashrutka on the ride back home (farm fragrance). After the work is done, Sahid invites his two helpers to his modest home and offers hot Chai and some conversation. 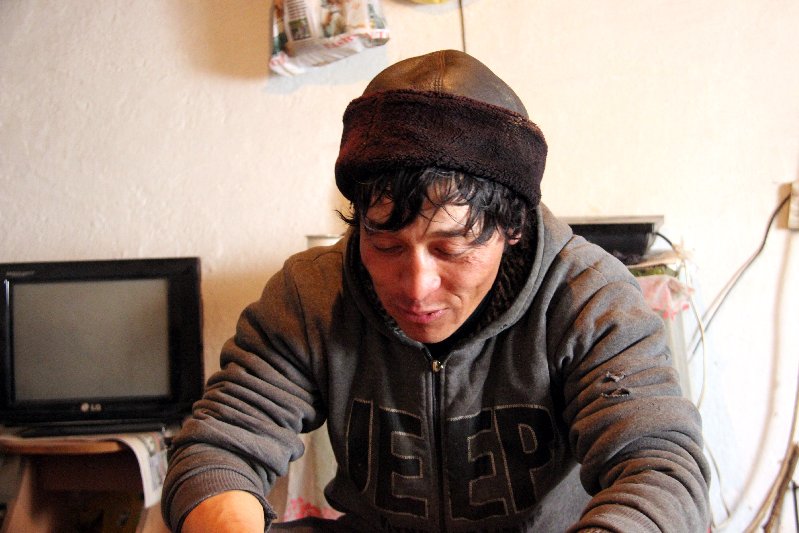 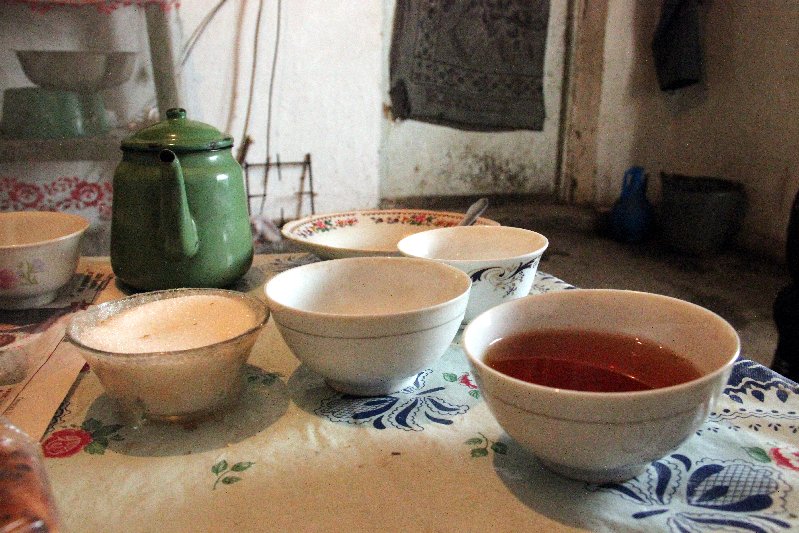 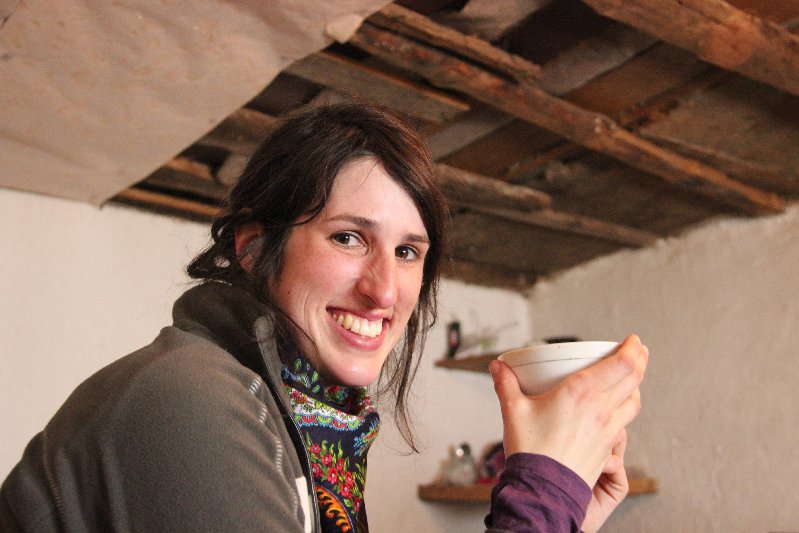 Later, Sahid cooks pilaf on his stove, a rice dish with meat and carrots. The educated man enjoys being a host and seizes the opportunity to chat about politics. What Lisa thinks about the situation in Ukraine, he asks, for example. In the middle of the conversation the puppies start barking. The neighbor has arrived to pick up his stallion. Sahid goes outside and closes the door behind him. Nevertheless, you can still hear him ranting inside. 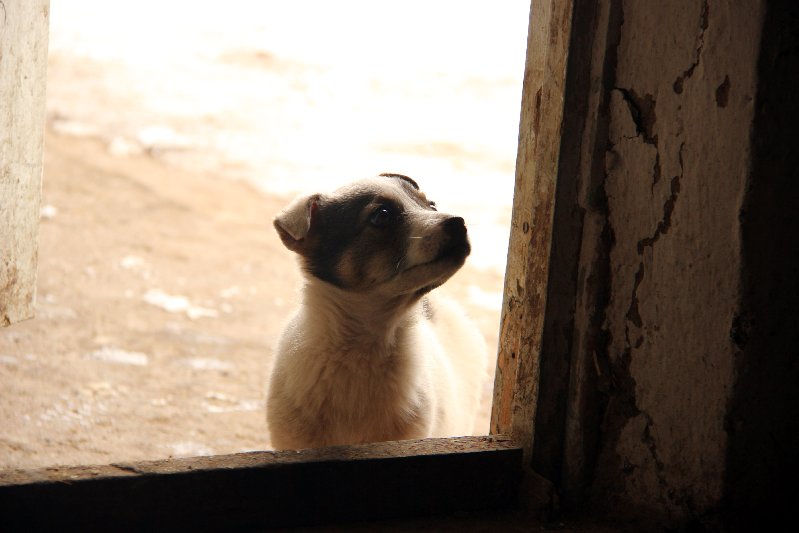 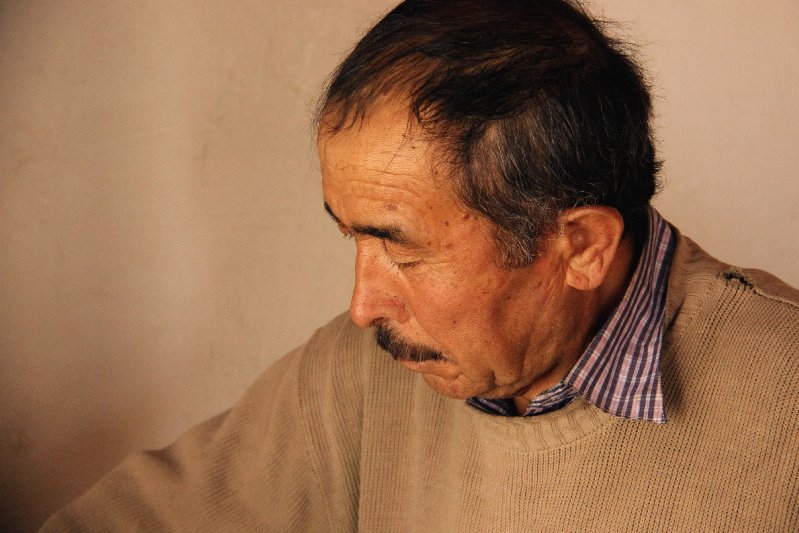 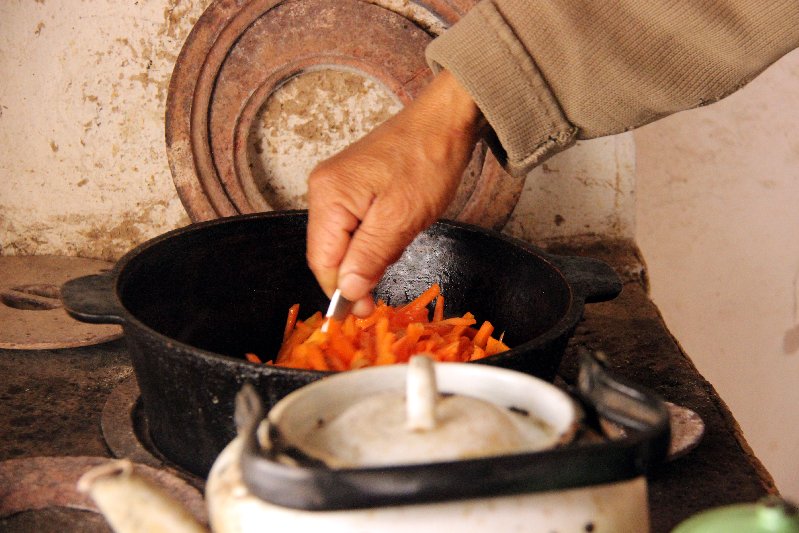 Sahid is someone who also (and perhaps especially then) is likable when he is ranting. The widower has studied agriculture, reads world literature such as Dostoevsky in his spare time, and he is a sociable person. He seems to reflect a lot about what is going on in the world and he is happy, when someone is listening. Lisa is welcome at his place and, when his (slightly tipsy) Brother stops by together with his nephew, they all line up for a group photo … very authentic in front of the muck pile. 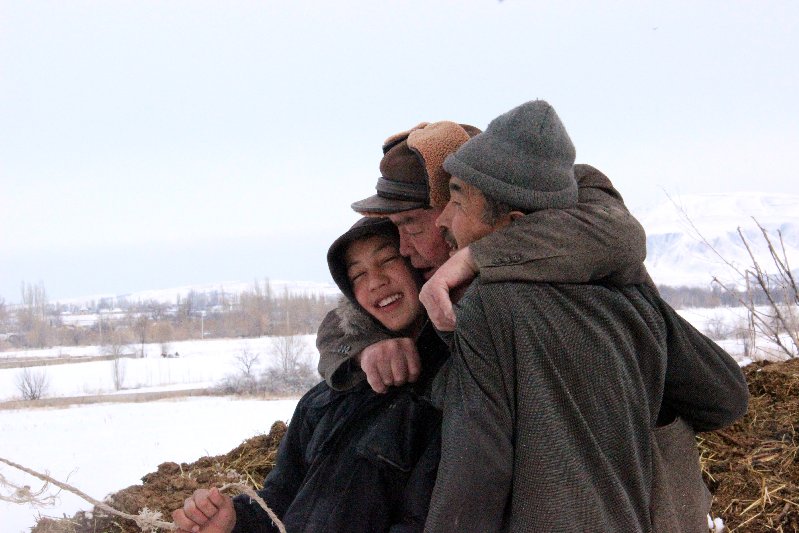 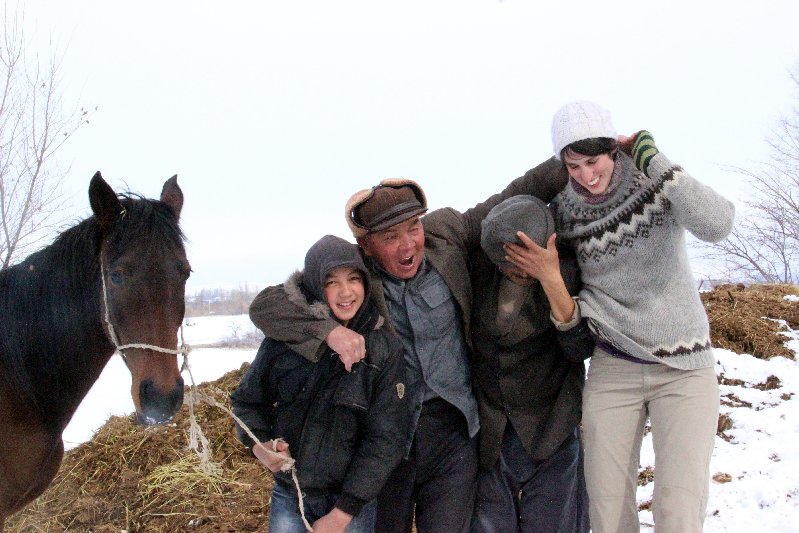 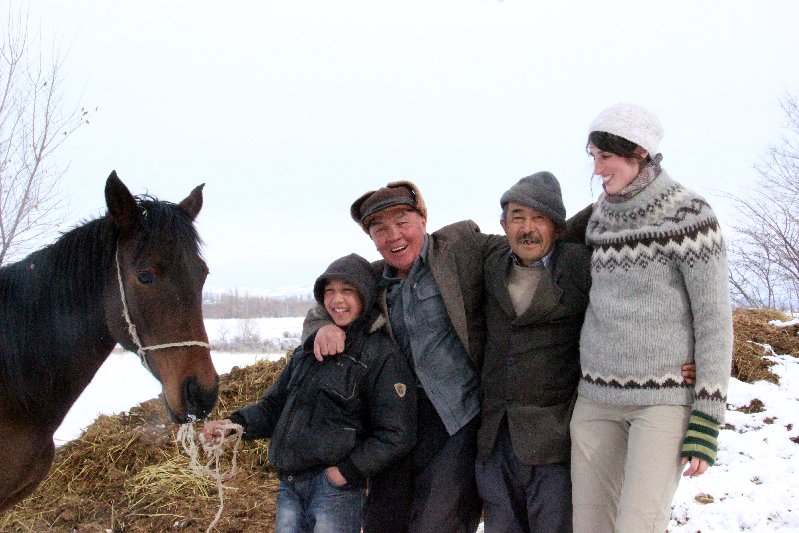