No Sport for the Faint-Hearted

Kok Boru is a real men’s sport. This we notice as soon as we get to the grandstands of the Bishkek Hippodrome. Being a woman, you stick out like a sore thumb. If you continue to look around, you cannot help but wonder if the security forces are outnumbering the spectators.

So we take our seats between the sunflower seed-chewing, chattering Kyrgyz guys. The atmosphere is like in football stadium. The game also seems to be quite similar. Even though I do not know the rules, the round pits at both ends of the pitch remind me of goals. The players in their jerseys, however, are sitting on horses and the ball… Well, the ball weighs about 50 pounds and actually is a headless sheep carcass – recently butchered.

Today, the Kok Boru games are taking place in honor of the Kyrgyz national holiday “Nowruz”. The Persian New Year is celebrated on the first day of spring, the equinox, when the day lasts as long as the night. 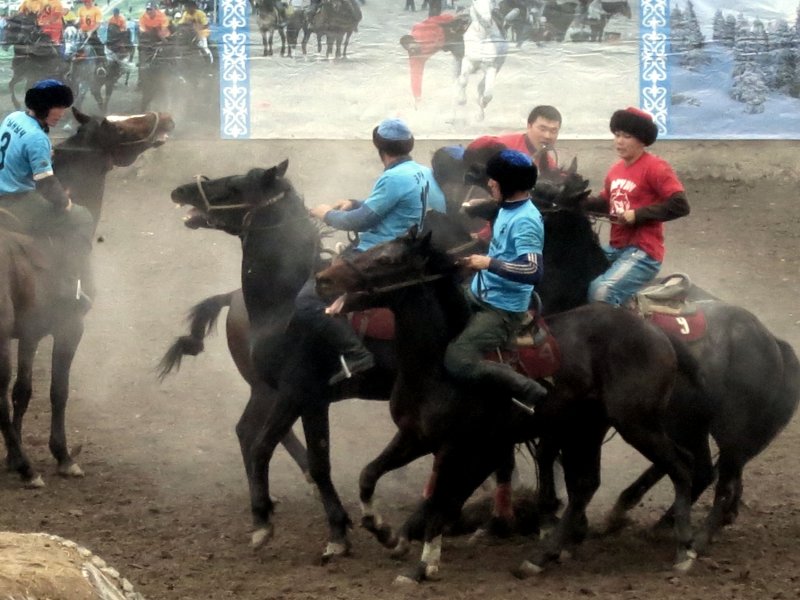 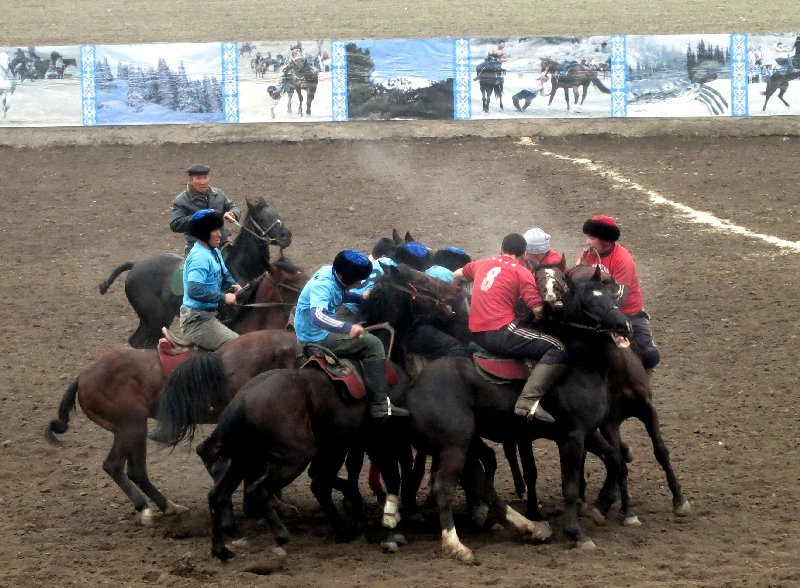 Fighting for the Sheep 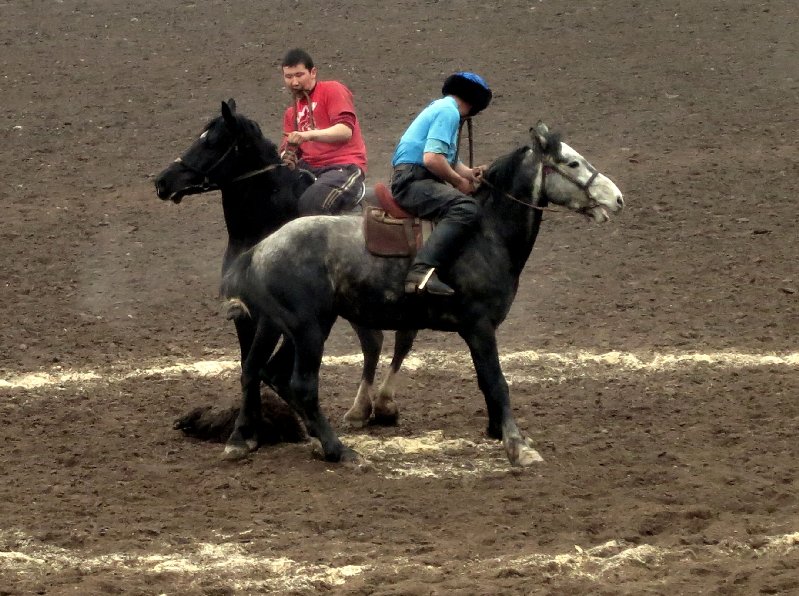 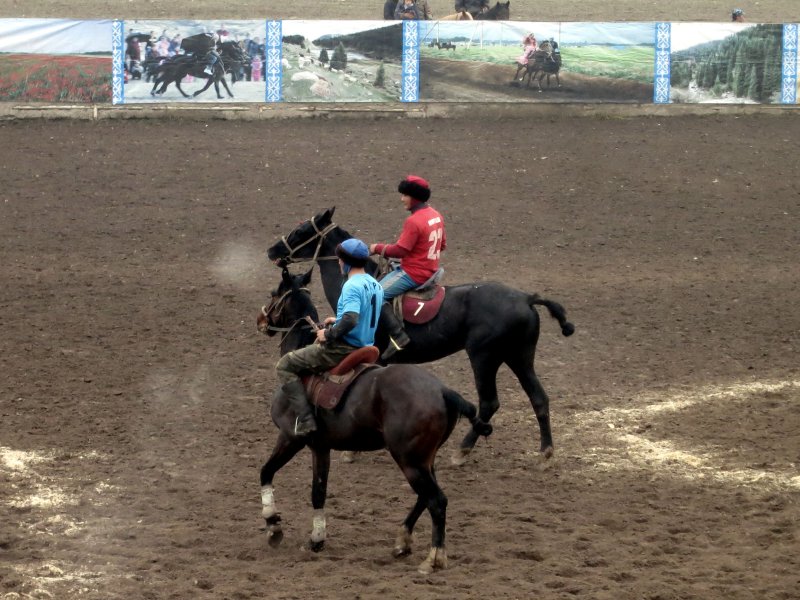 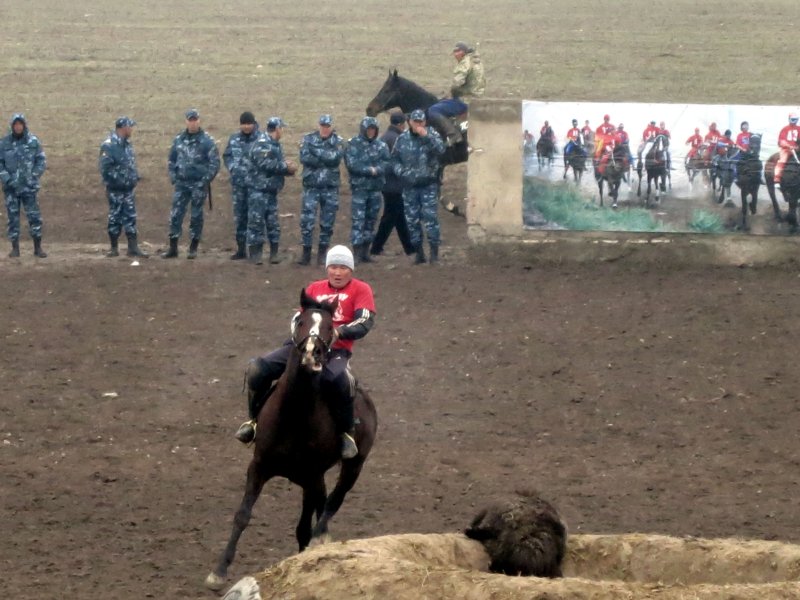 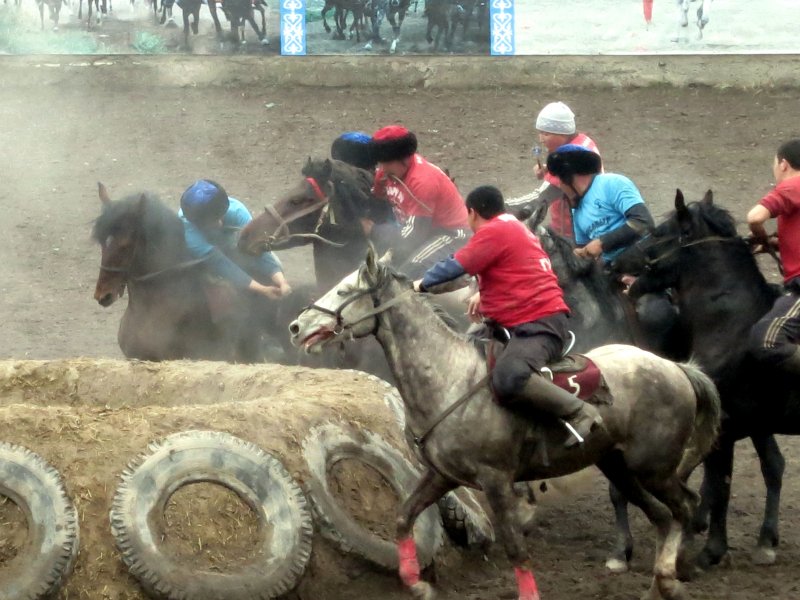 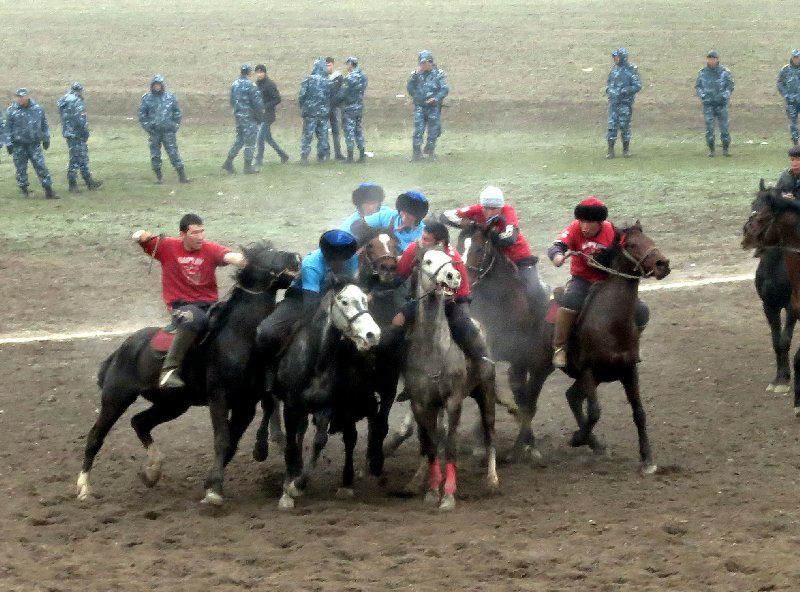 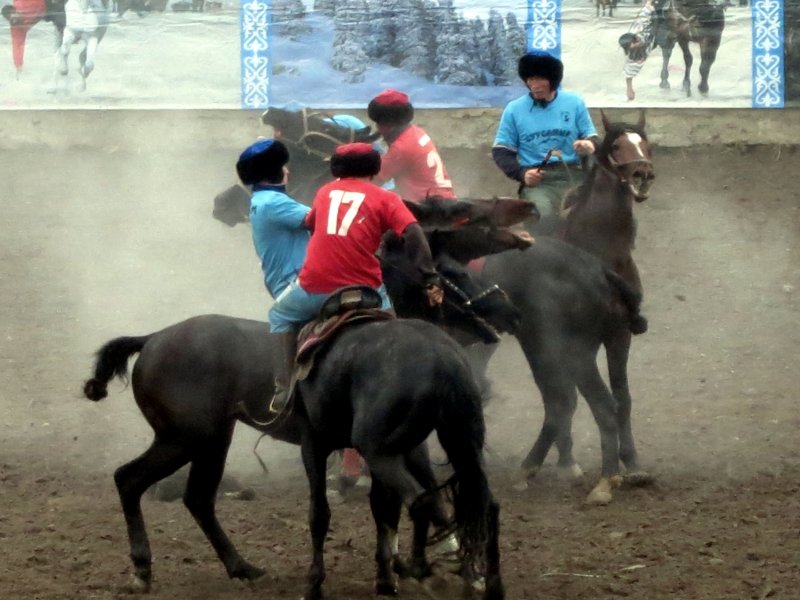 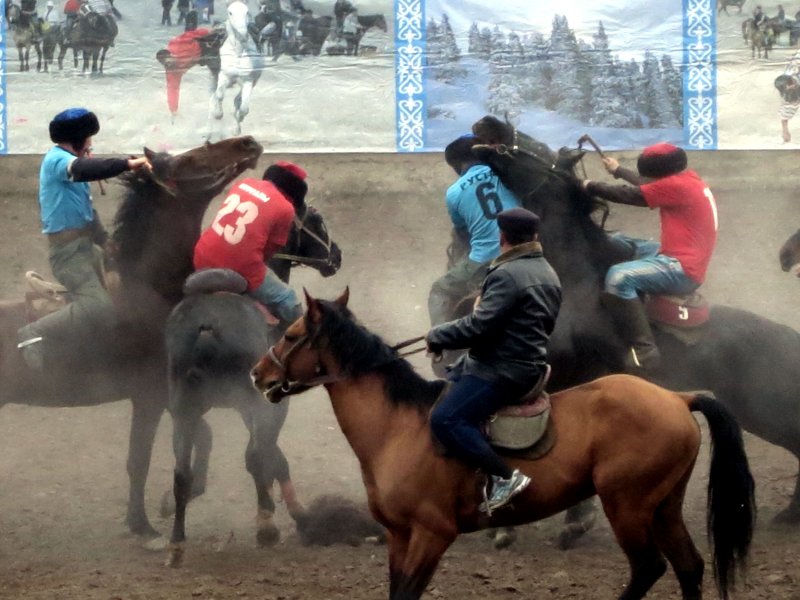 The Referee is Watching 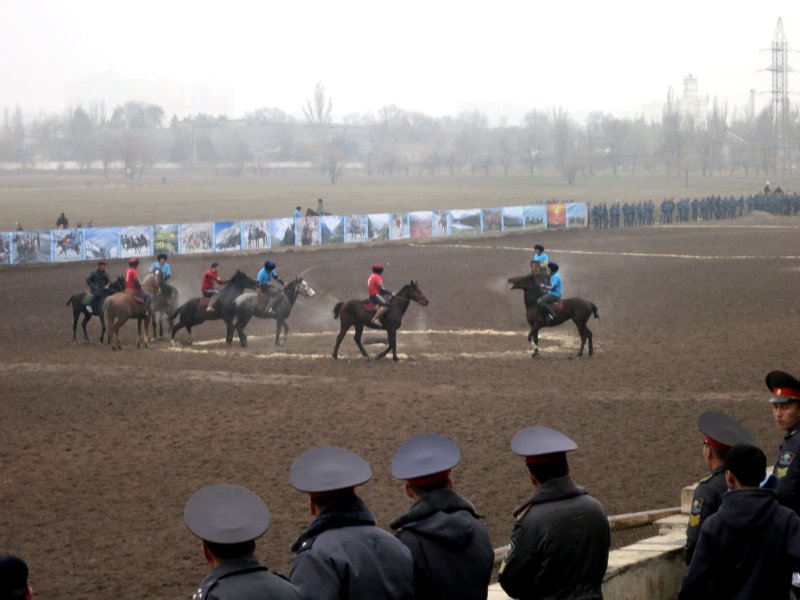 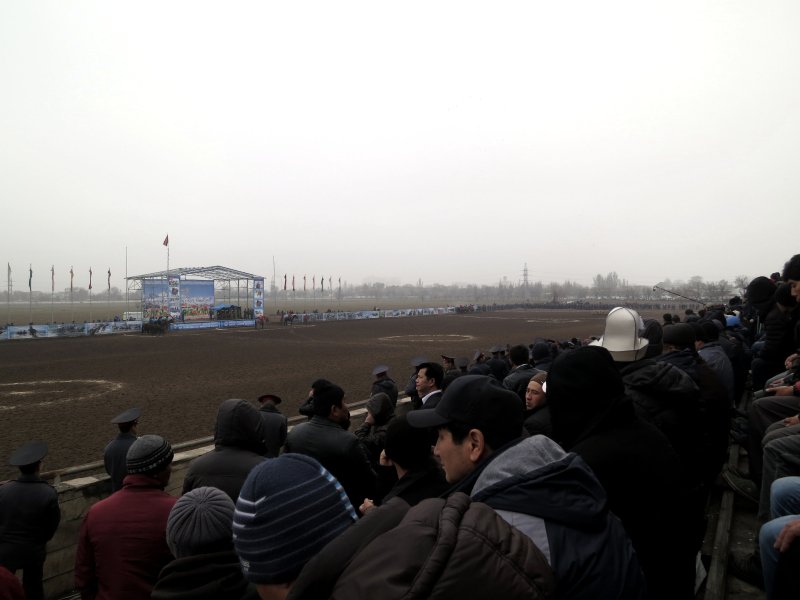 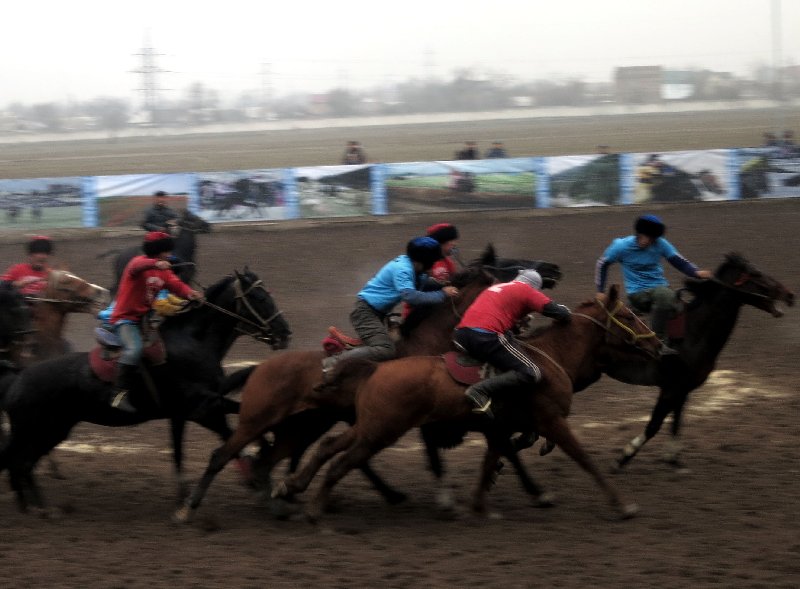 There is the opening whistle. The two riders – one from each team – are both trying to pick up the sheep’s carcass that is lying in a chalk circle on the ground. You can hear the dull sound when their horses collide. The men are beating each other with their whips. One of them manages to heave the bulky sheep body onto the horse, his opponent still trying to get hold of it. The rider jams the sheep with the leg to the saddle. First, he is thrashing on the opponent’s horse, then on his own. He frees himself and rushes away in gallop – towards the goal pit. Now the other players wake up, so far they had been only watching. A wild chase starts and you can only see a cloud of hooves, dust and whips.

The red team almost manages to throw the sheep into the opponent’s pit. But maneuvering the horse with the heavy weight make it tricky to score. The blue team manages to push away the attacker. The horses rush towards the grandstands. One of them already has blood dripping from its mouth. The forceful back-and-forth-tugging on the reins has left its traces. The audience jumps up to better see what is going on underneath them. Again, the whips are swirling in the air. A blue rider suddenly storms out of the crowd, jammed under his leg is the headless sheep. The spectators cheer.