“Swing” Festival in the Canton of Uri

The serious, concentrated faces tell the tension when the opponents grip each other on their tear-resistant “swing” pants, waiting for the referee’s signal. When it comes, both try to push the opponent backwards into the sawdust by using certain wrestling moves, also called “swings”. 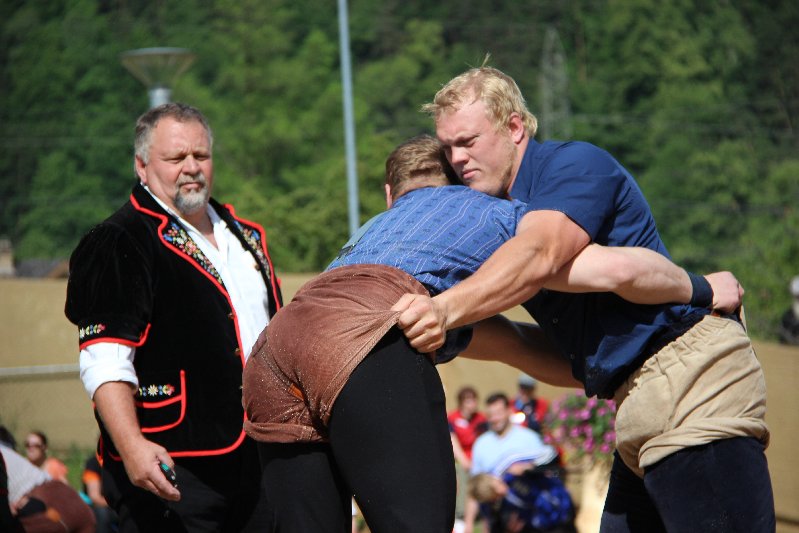 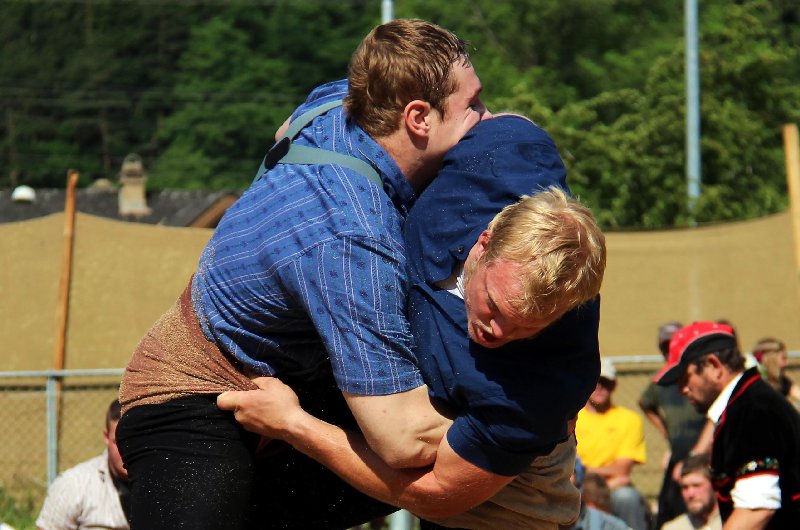 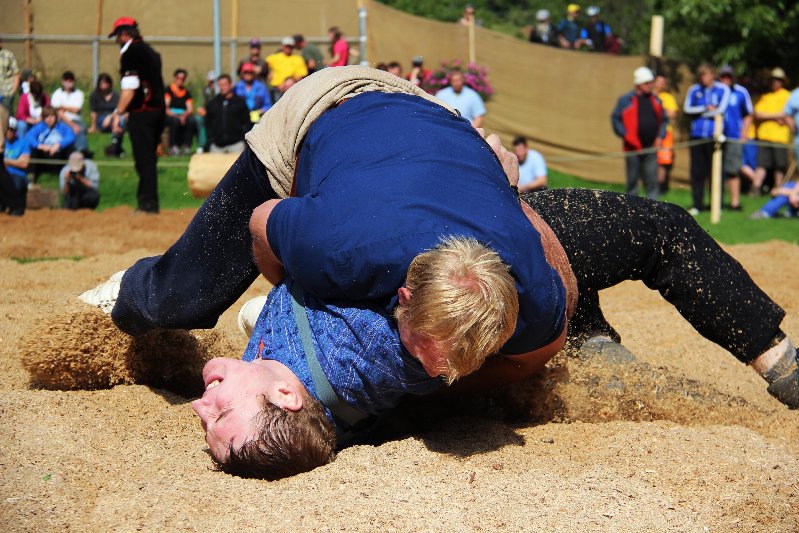 “Swinging” is a Swiss national sport, which is mainly practiced in the German speaking parts of the country. The centuries-old tradition enjoys great popularity even today, as the packed grandstands show this Sunday in the village of Erstfeld. The atmosphere is rather cozy at the “Uri Cantonal” – those who are not watching one of the five arenas, are sitting in the beer tent or are dozing in the shade on the lawn. One of the 2,500 spectators told me proudly that despite an attendance of nearly 50,000 at the nationals there are never fist fights among the spectators. Well, this is Switzerland. 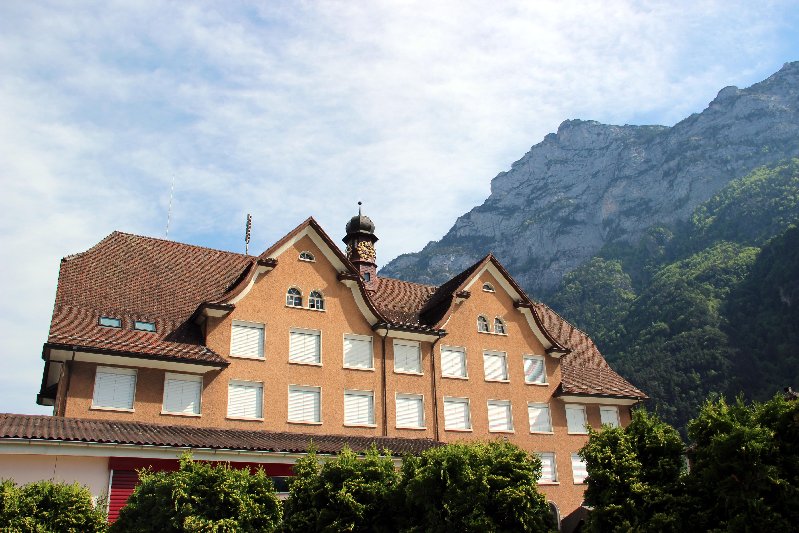 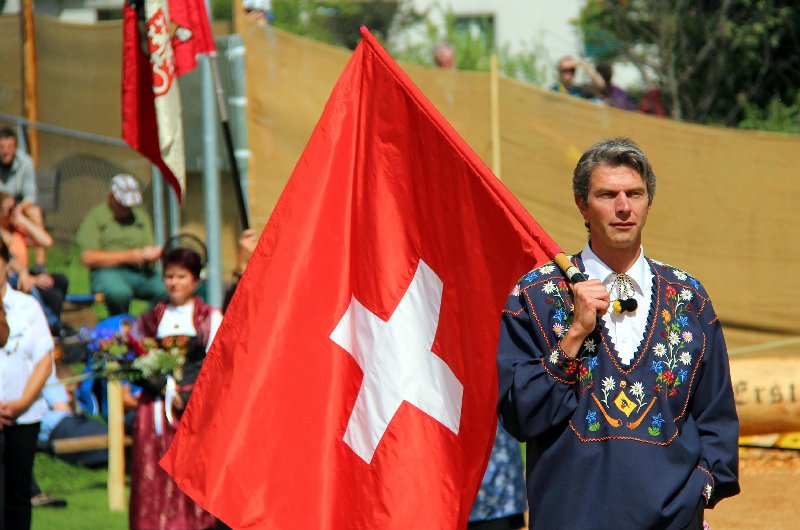 The “swing” fights start early in the morning at half past seven and are only interrupted around lunch … for Sunday Silence. Who is attending the swing festival, cannot go to church, and therefore the Church comes to the arenas. However, as the pastor starts with the service most people are attracted by the beer tent. After the service, the “swinging” continues. The 164 participants from various age and weight classes must all compete against each other, six runs with five minutes per fight. 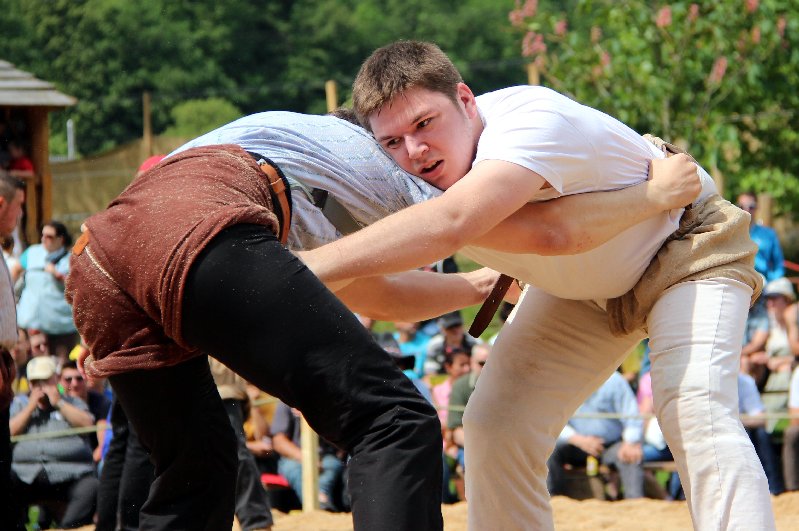 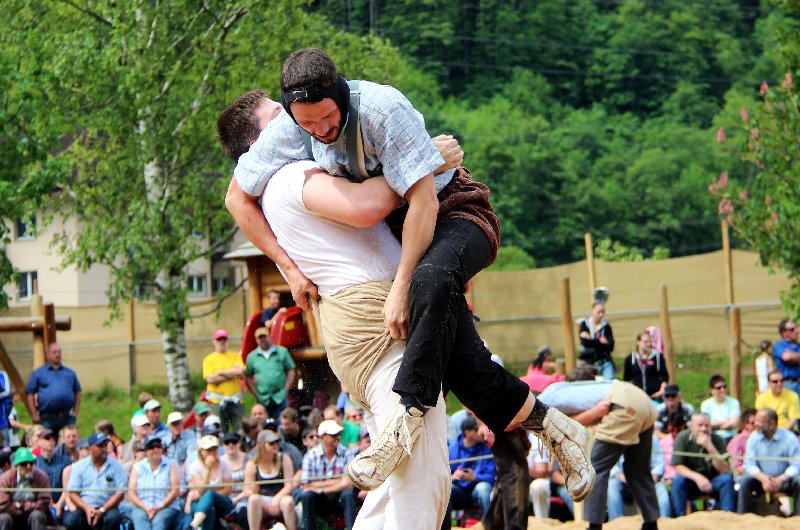 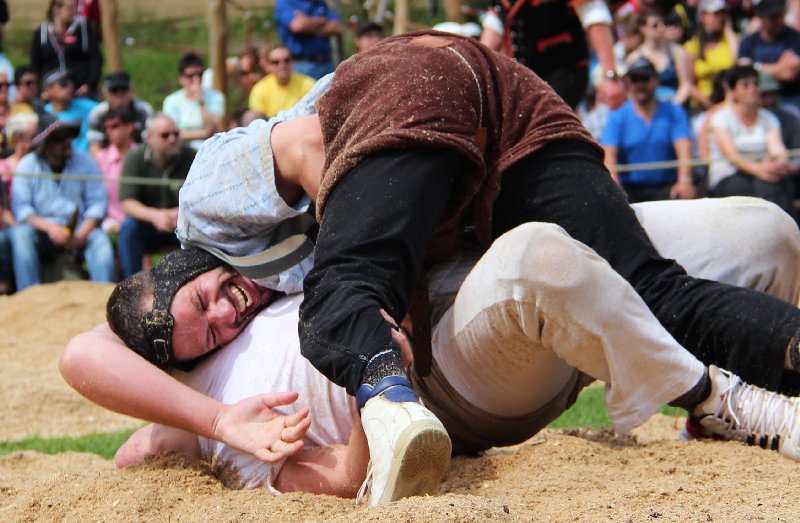 „Kurz“, „Übersprung“, „Brienzer“, „Hüfter“, „Buur“ or „Wyberhaagge“ are the names of the main moves which the opponents use to push each other into the sawdust. The winner is the one who grips the opponent with at least one hand on the “swing pants” and pushes him with both shoulders into the ground. At least two-thirds of the back must be on the floor. The best “swingers” are referred to as the “bad guys“. 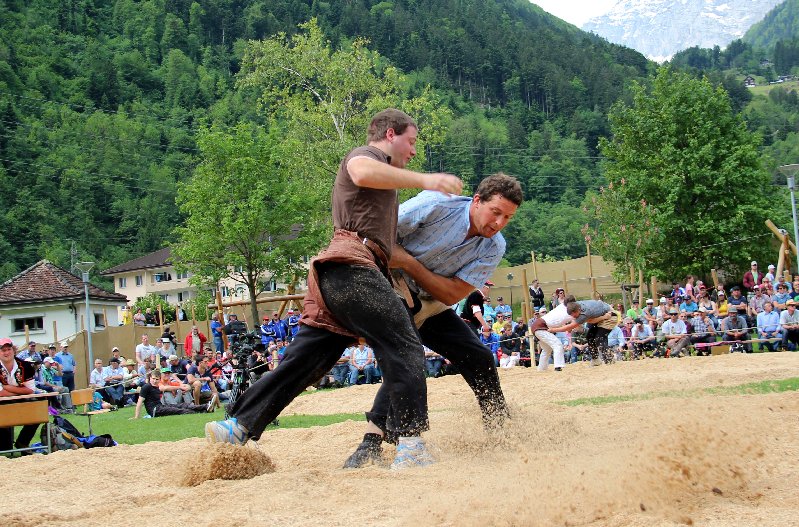 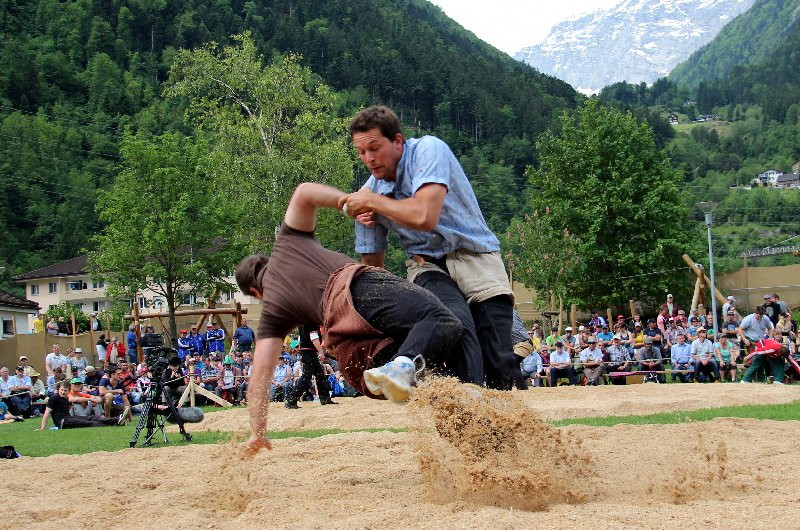 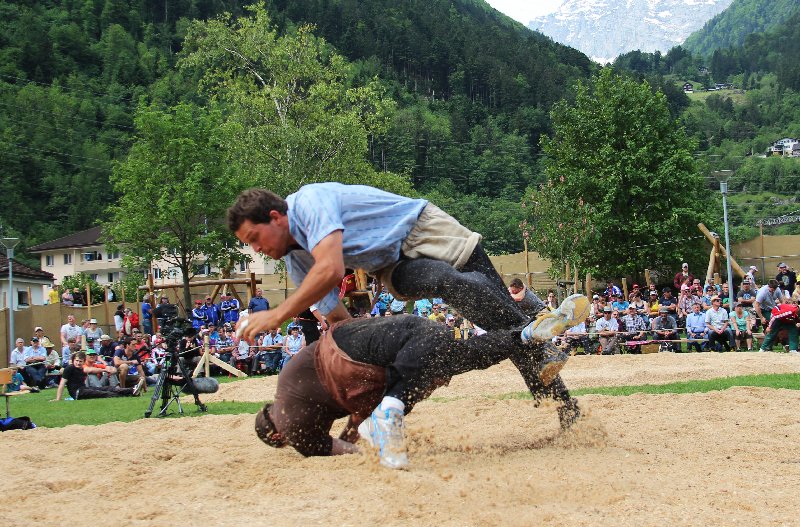 Each participant has a number. The numbers of the fighters are displayed front and rear on a blackboard. To ensure that all spectators can see these panels, they are permanently rotated – “low tech” – by little helpers – an honorable task, as I was told. Every fight is observed by three judges, one of which is always next to the battlefield, the other two are sitting at the table. 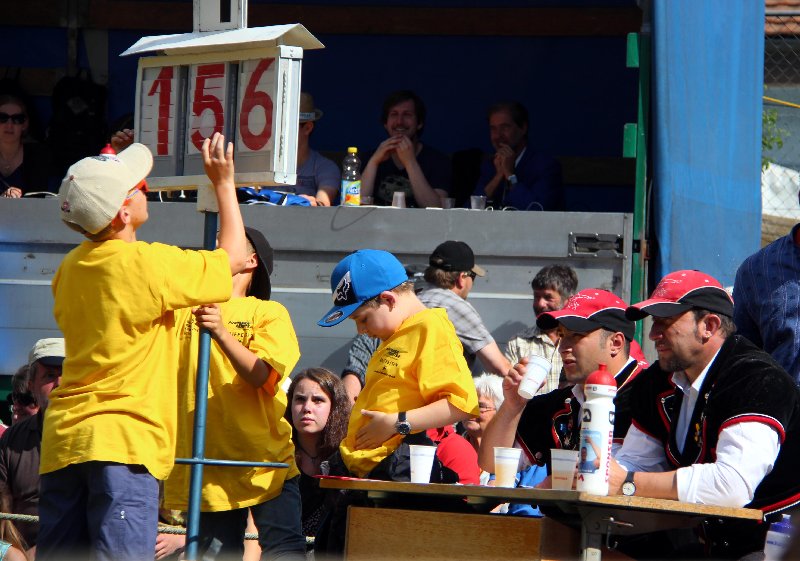 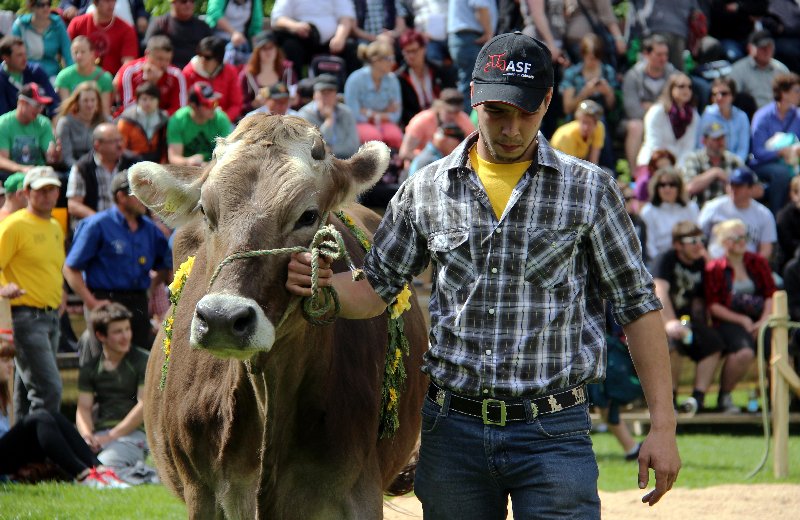 Also quite traditional are the prices. Besides tool boxes, chain saws there are hand made cowbells and traditional suits. But the most interesting are the first and second prize: a two-year-old and a one–year-old heifer, both of which are presented to the spectators in the breaks between the fights. The first prize I know personally. Camilla was sponsored by my boss and his club, and when she walks on the lead rope without objection, calmly passing the crowd, I’m even a bit proud. The training has paid off. To get her used to the lead rope, we took her for a walk several times. 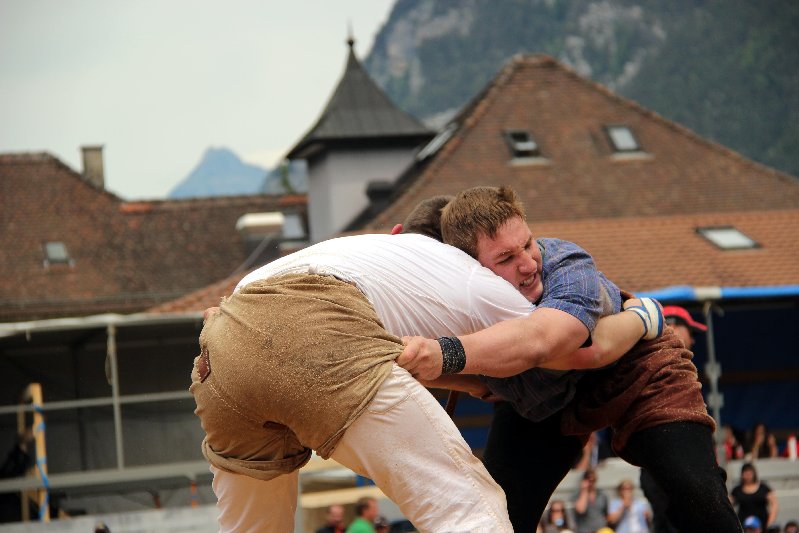 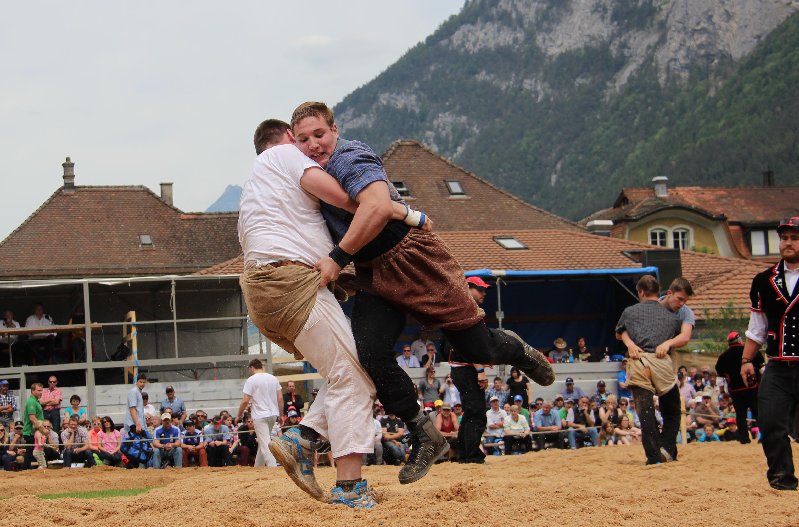 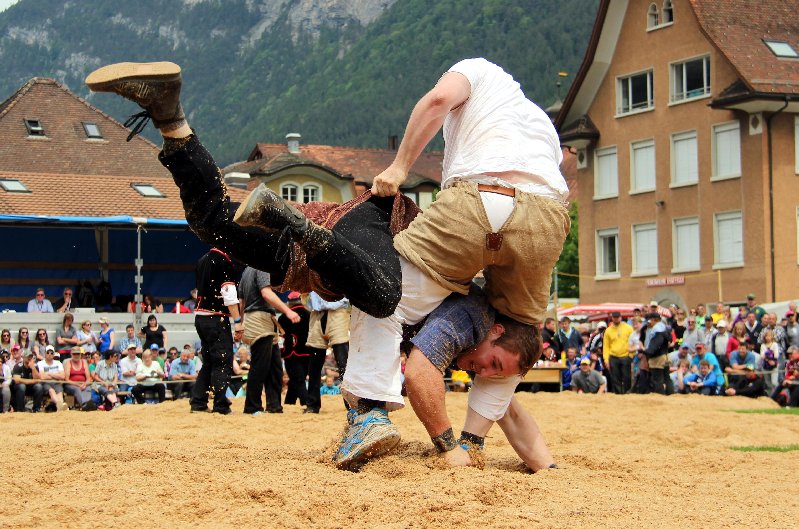 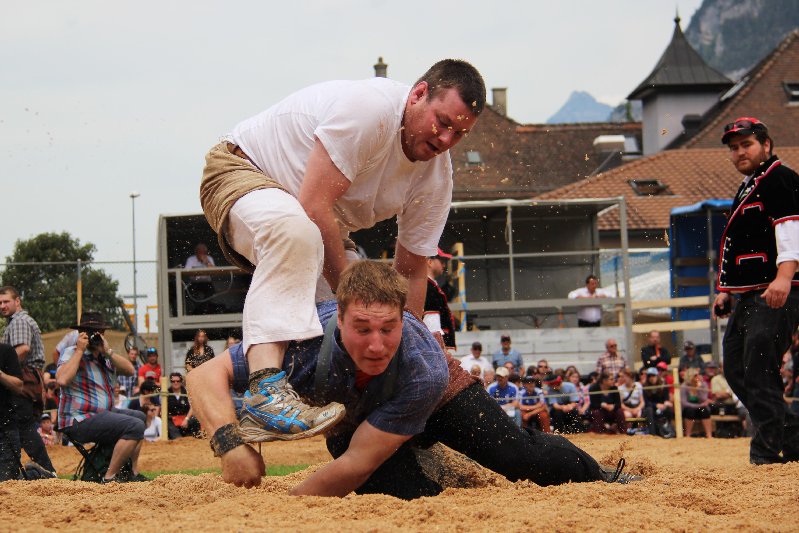 In the evening, the winner gets announced: a 26-year-old from the canton of Schwyz. I’m not able to see the victory celebration because I have to go home for milking the cows, but I am certainly happy, when the next day I see my dear Camilla back in the stable stands. “The live price is rather symbolic, the winners usually choose the prize money instead,” says my boss, who would have reluctantly given away the beautiful animal. 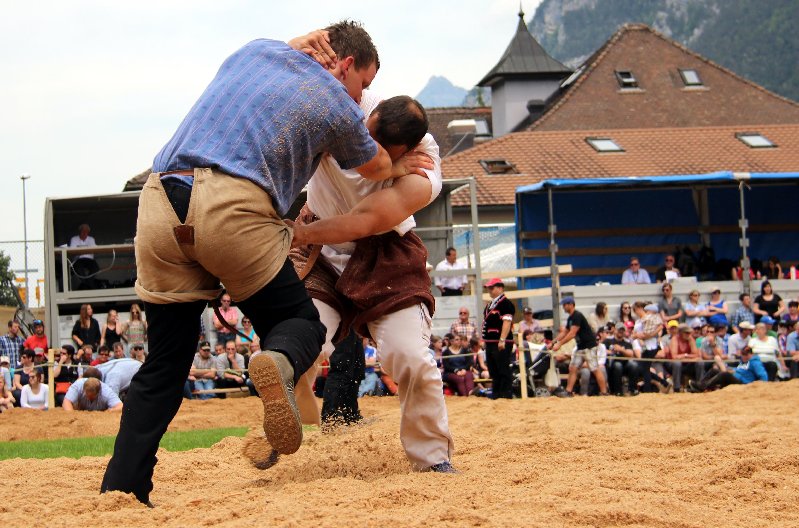 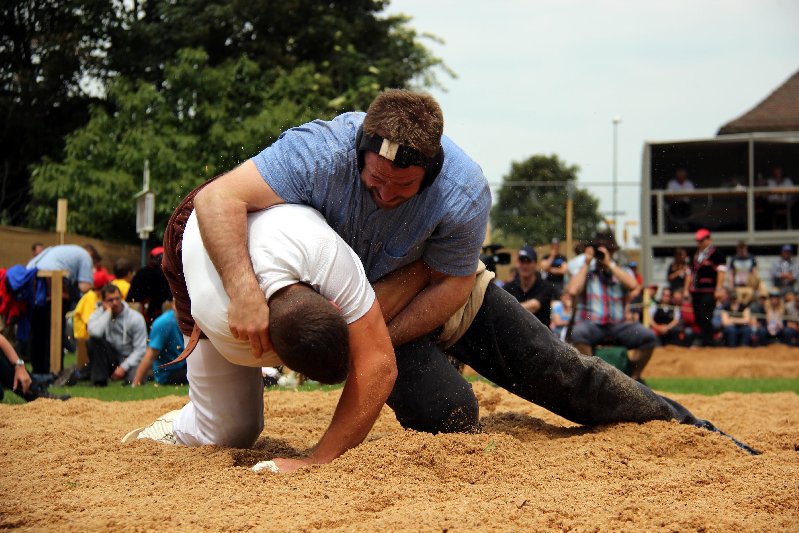 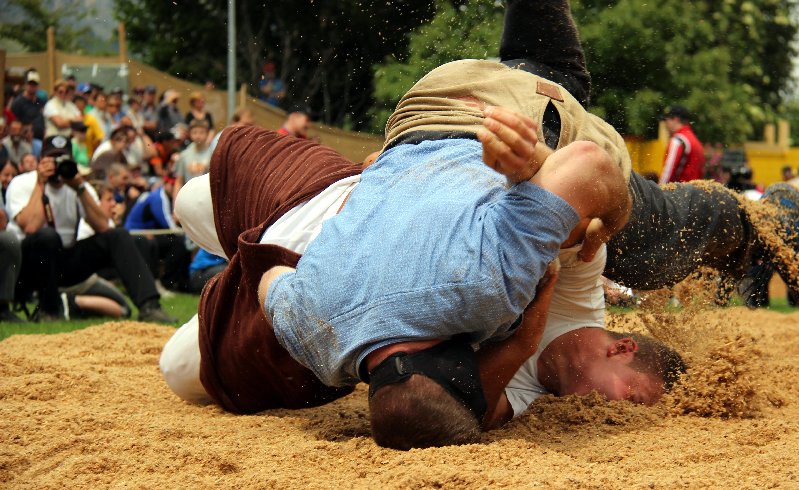