The taxi driver asks: “What was your first impression of Almaty?” I answer: “A nasty rip off by a taxi driver.”

In the morning, I took the Mashrutka from Bishkek (Kyrgyzstan) to Almaty (Kazakhstan): 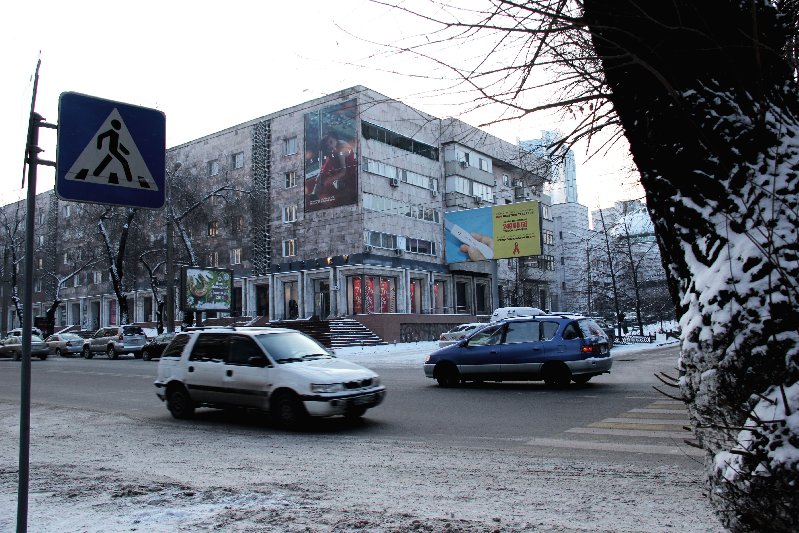 From the bus station, I take a taxi to the corner of Gogol and Furmanova, in the center of Almaty. I knew that the price for tourists is higher than for locals. However, I was used to the Kyrgyz surcharge of about one third. This taxi driver increases the price by the eight-fold: 4000 Kazakh Tenge for a route that normally costs 500. I am happy when I bargain him down to 3000 (just under 20 USD). He just grins, nods and drives off. 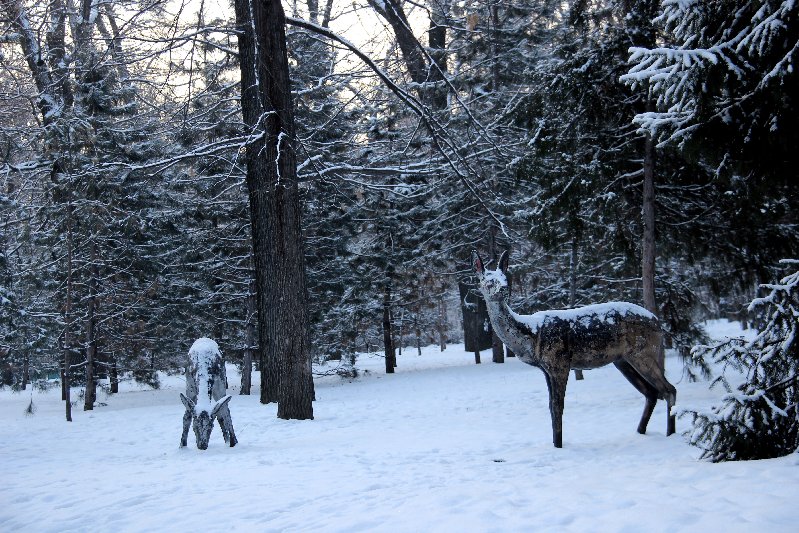 When I tell this to my Couchsurfing hostess Olga, she makes big eyes and apologizes: “I should have told you beforehand, how much it costs.” Olga is generally very nice and shows me my room in her spacious apartment. I immediately get served tea, along with the Wi-Fi password. When I ask, if I can invite her to lunch, I just get a question in response: “Would you like to come to the post-Christmas dinner at my mother’s place?” We ordered a taxi and Olga, who is a professional Russian-English translator, helps me talk to the taxi driver. He shakes his head in horror, when I tell him about my first taxi experience. 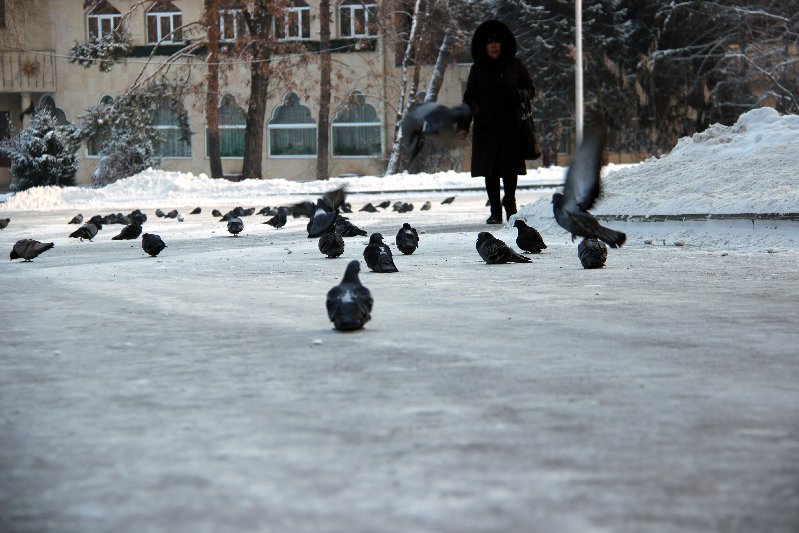 The lunch with Olga’s mother and her partner turns out to be quite entertaining. In her youth, the woman used to be an amateur parachutist and sniper. With her husband, a Russian soldier she has traveled extensively and has lived in Kyrgyzstan and Tajikistan. Casually, she tells me of her encounter with a wild snow leopard. Only few people have seen the elusive cat in the wild. For more than ten years, she meditates daily and meets with her ​​Indian guru on a regular base. Therefore, the Christmas meal is completely vegetarian – unusual for the culture in this country. I listen closely to the stories of Olga’s mother and keep looking at the family photos she shows along the way. 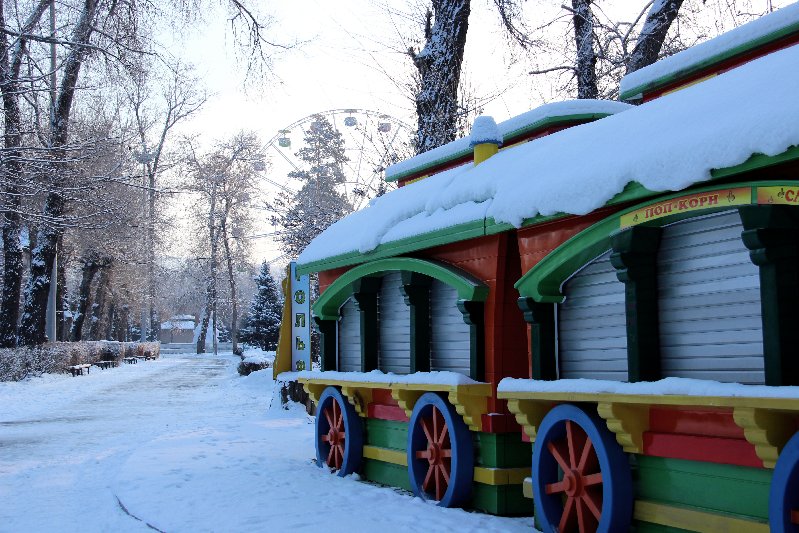 Olga tells me about her brother, who now lives with his wife in St. Petersburg. She would love to see him more often, but she doesn’t like it there much. “In Russia, the people look down on us,” she explains. By “we” she means the Russian citizens of the ex-Soviet states. “We speak Russian, but have a different dialect. Once this was the reason that they refused to sell me anything in a store,” says Olga.

The next day, Olga has to work and I’m trying to kill time. I won’t return to Bishkek until the day after tomorrow. Three days are not enough to make a decent trip to the country. Although I have to admit that I am very intrigued about the endangered saiga antelopes with their cute trunk-noses. In China they make medicine of their horns, which is why they are often being smuggled. The border patrols are currently training dogs to sniff out the saiga horns in the luggage. The ride to the Altyn Dala reserve, where the saiga antelopes live, however, would take a whole day and was difficult at the time because of the snow conditions. 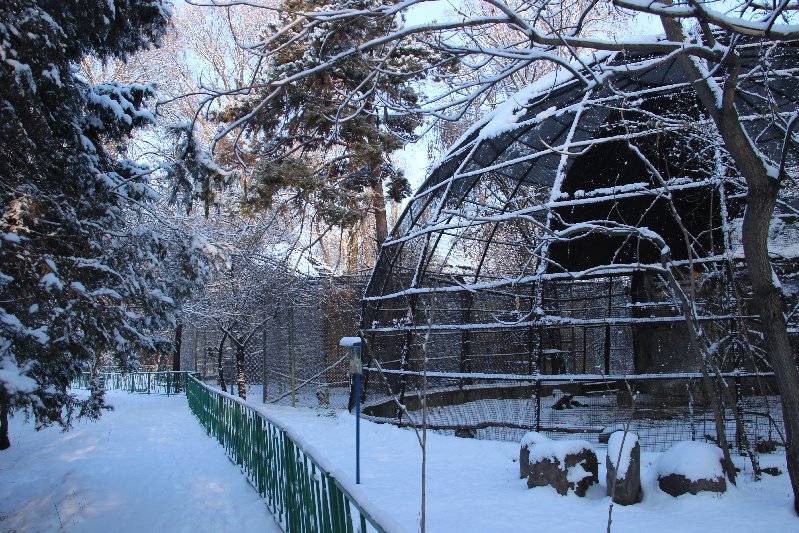 To prevent big-city stress and any unnecessary cultural education, I decide to go to the zoo. Normally, I’m not a big fan of the “wildlife in a cage” -concept, but on this cold winter morning it is the only interesting alternative. In addition, I had heard a story in the Kyrgyz NABU rehab center that I wanted to pursue. 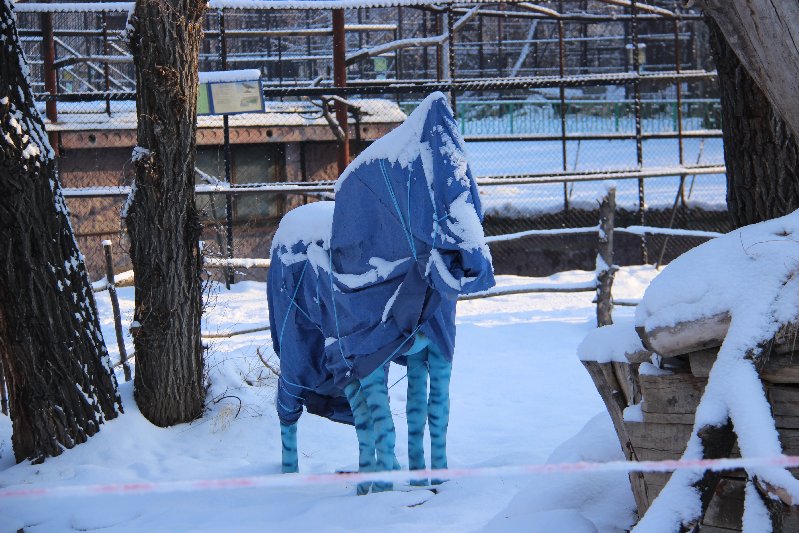 A few years ago two snow leopards were born there with a genetically-related eye disease. Thus NABU gave them to the Almaty Zoo in order for them to get medical attention. “If I’m here anyway, why not stopping by,” I think to myself. In order to get to the zoo, I have to walk through the huge Gorky amusement park, which is closed on this Monday morning. The rides and huts are covered with snow. Behind a tree two deer sculptures are looking at me with wide eyes. 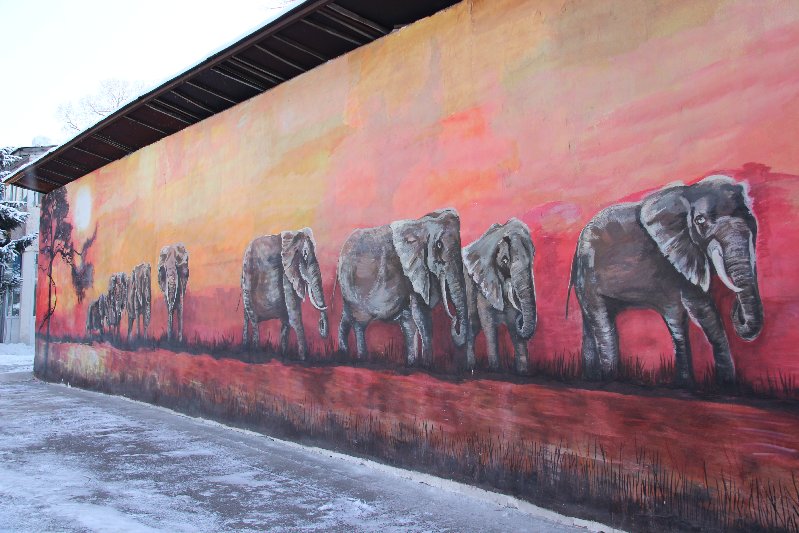 At the zoo, I am the only visitor and most enclosures are empty. For the elephants and giraffes it’s too cold. But I’m not worried: for snow leopards, it is the perfect weather. I walk the whole area three times, but I only find wolves, tigers and Indian leopards, no trace of snow leopards. So I go to the administration building. Actually, I just wanted to ask if anyone can give me information in English. 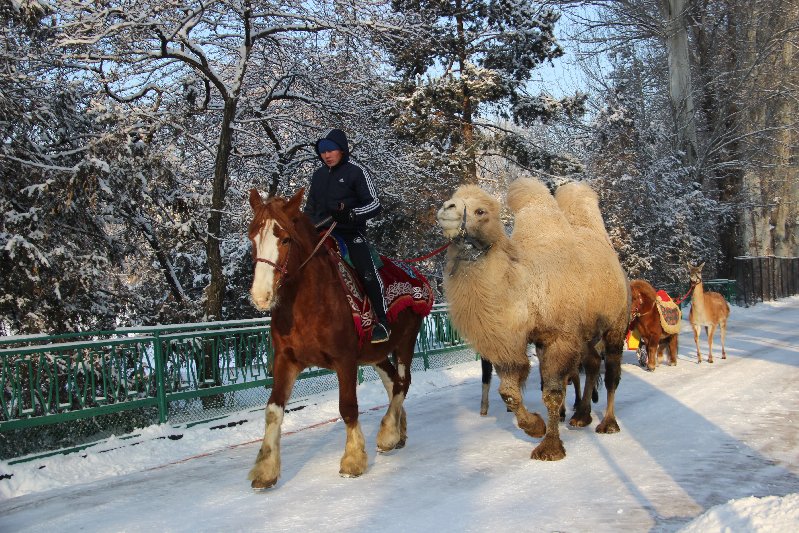 The deputy director is pleased with my visit, and introduces me with their wildlife biologist. Then he orders a translator from the city and I learn all about the eye disease of the snow leopards and the operation that was carried out by a Kazakh specialist. At the end of the zoo’s own driver gives me a ride back home. That’s what I call hospitality. 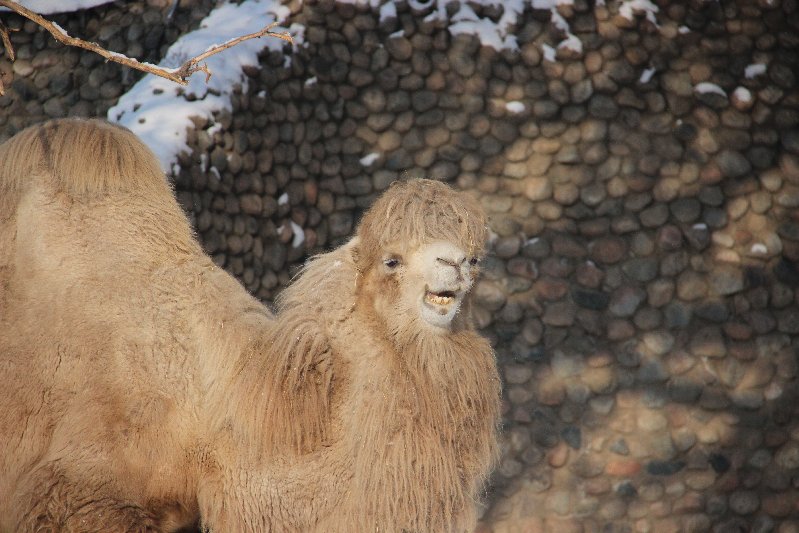 What got me quite amused during my little stroll through the Almaty Zoo, was this: Right next to the enclosure with the cute deer babies, they put a shooting range. 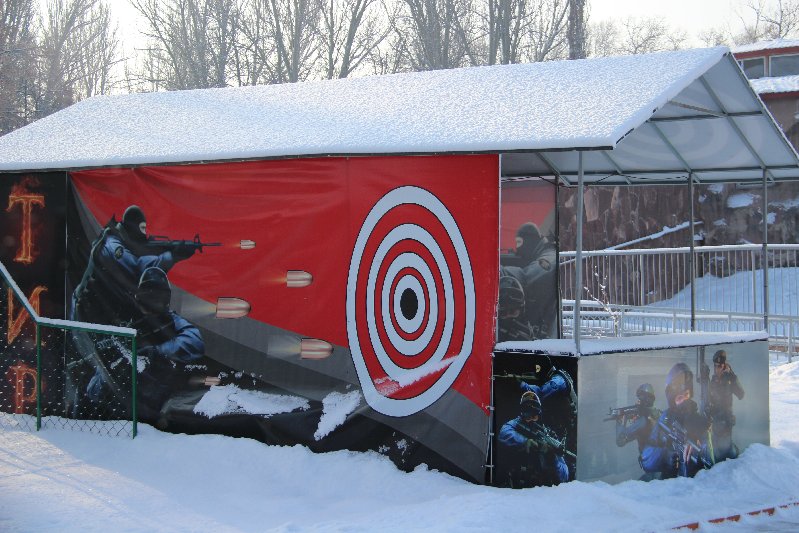 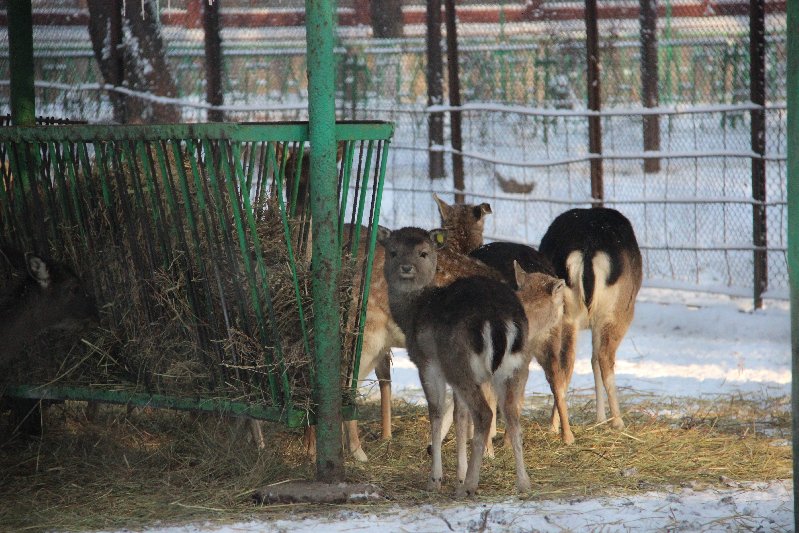 My remaining time in Almaty was fairly rum-drenched. From one of the many drunken conversations with a Russian friend I have learned about the broadtail pelts of Karakul sheep. His fur jacket was fluffy warm but I couldn’t figure out what fur it was made of. When I asked him what kind of animal that once was, he only answered: “aborted sheep babies”. “Aha, interesting,” I thought and googled the story later. It’s true, such a thing really exists. Here is a Wikipedia article on the subject.