When asked the question: “How much hay does your family need for the winter?” Uyadagwa thinks for a moment. Then he points to the horizon. “We have to mow the grass till there. 20 trucks of hay we have to bring to the camp. Then we have enough.” 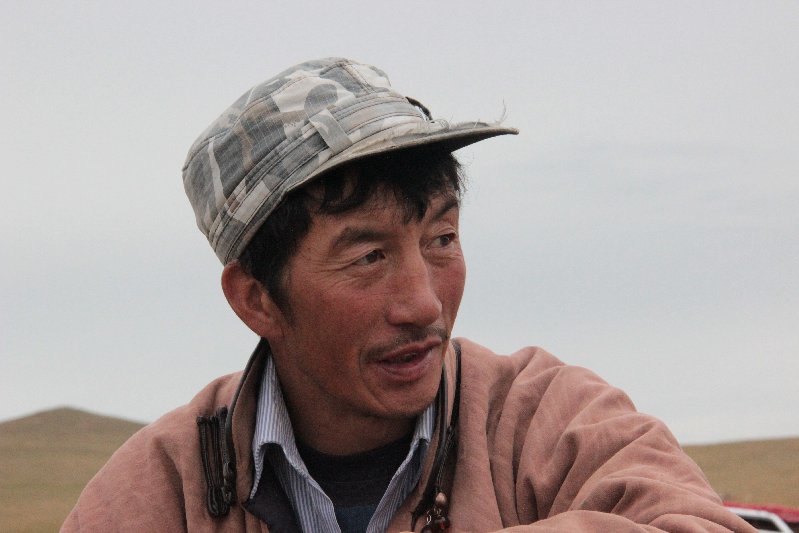 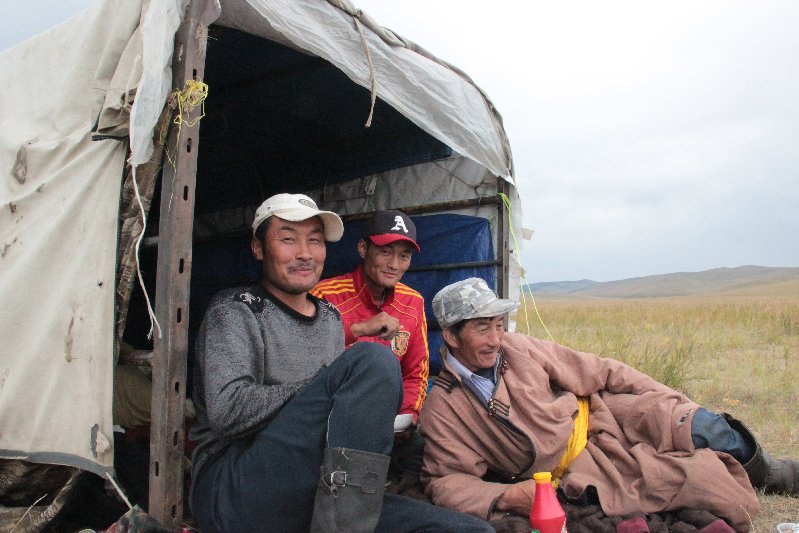 Uyadagwa (41 years old) and his two brothers Enkhjargal (33 years old) and Batchuluun (23 years old) live in the Khentii province of Mongolia. Genghis Khan was born here, the steppe is green and the grass is lush. But the winters are hard, lasting months with temperatures down to minus 40 degrees Celsius. “We start feeding hay from the end of November,” says Uyadagwa, “if the weather is good, only until March, if not, then to April or May.” 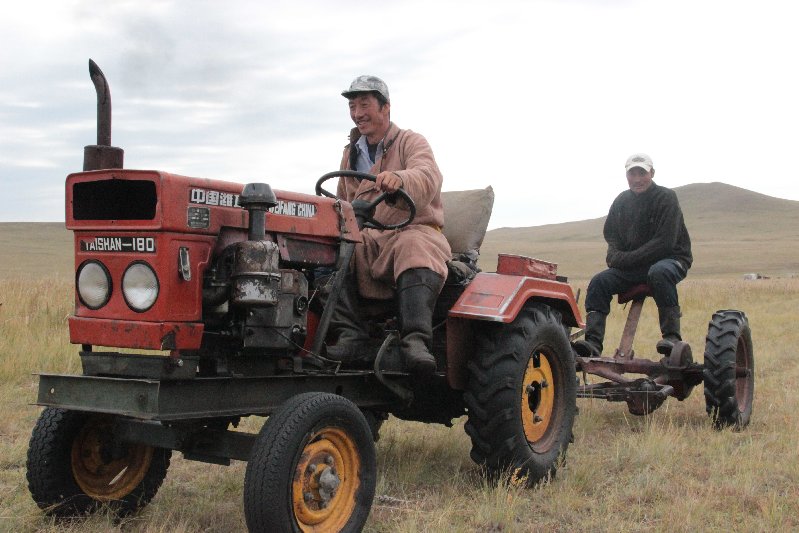 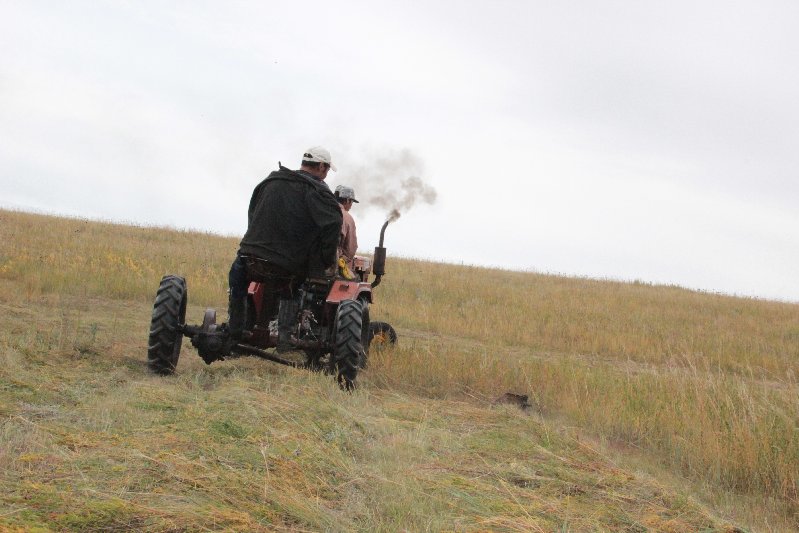 His family owns 300 sheep and goats and 40 horses and yaks. The livestock is their livelihood: they sell the flesh of animals, dairy products and wool. Therefore, it is important that all the cattle survive the winter. Mainly the young animals get additional food in the cold season. The adults find enough grass under the snow cover. Work horses that are used during the winter time also get an extra portion. So do the horses that will run races in the coming year. The race horses are the pride of the family. A whole truck hay calculates Uyadagwa for each of his three race horses. 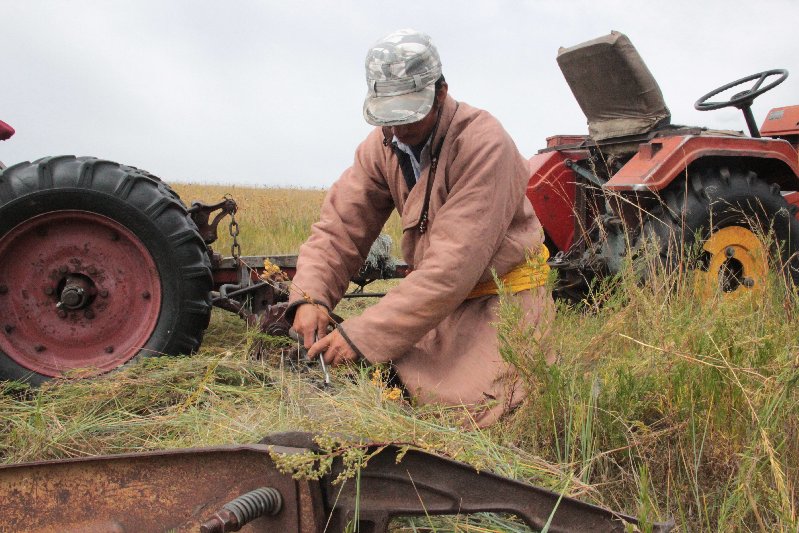 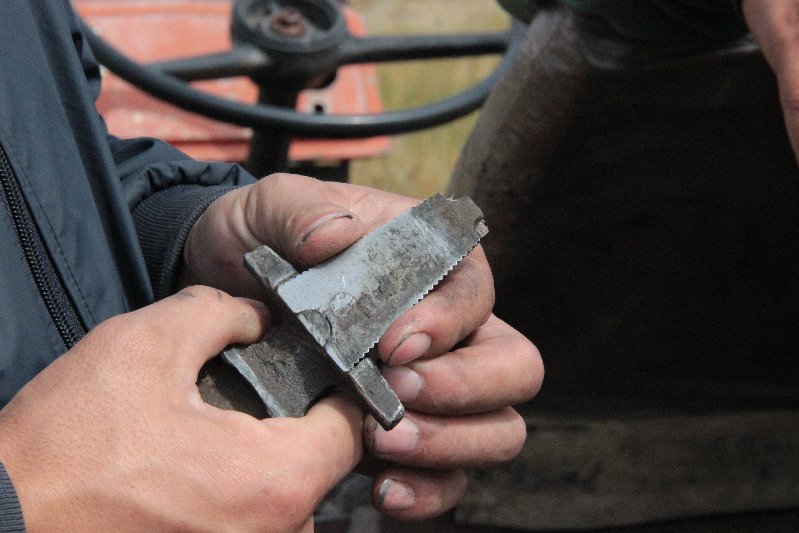 For making hay, the three brothers have pitched their tents in the desert – several miles away from their yurts and even further from the nearest town, Tsenkhermandal. From late August to mid-September, they stay there, until they have enough grass for the winter. “Sometimes the women bring food, but usually, we have to cook ourselves,” says Uyadagwa.

After the breakfast, warm yogurt with rice and raisins, they get started with the work. Together, the two older brothers attach the mower to the small Chinese tractor and drive off. Uyadagwa is behind the wheel and Enkhjargal sits on the mower in the back. He raises and lowers the sickle-bar by hand. The youngest brother, Batchuluun, stays at the camp. He attends to the spare parts. A few days earlier, they had searched the entire mowing site and removed all the the rocks. One rock they must have missed, because, suddenly, a metal finger in the sickle-bar breaks. The men are accustomed to such problems.  Immediately, Batchuluun brings the replacement part and together they repair the unit. 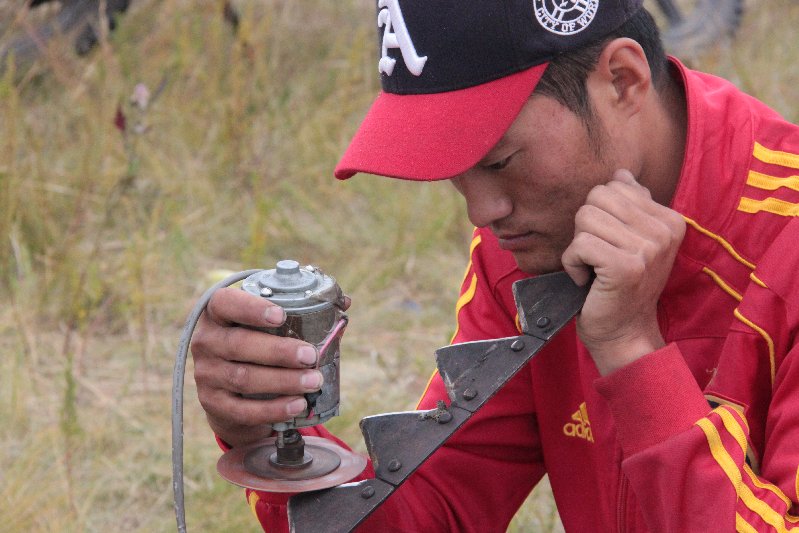 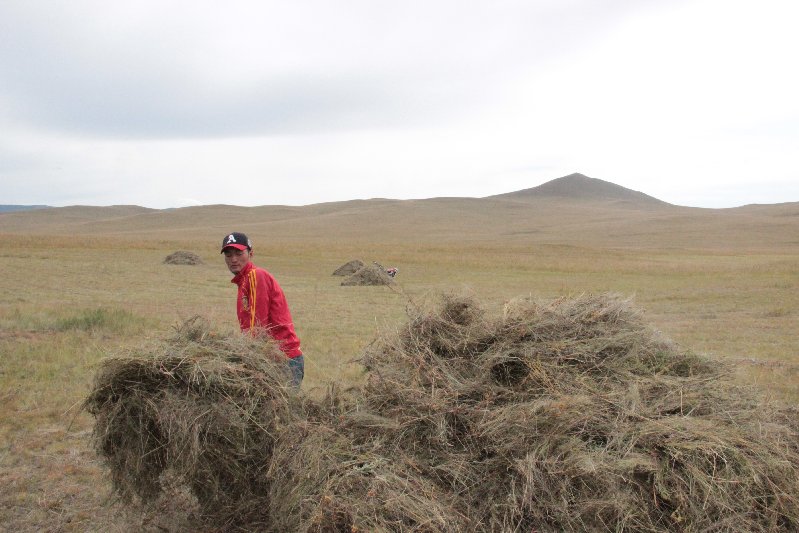 In the past, they used a horse or a camel for pulling the mower. For six years they have been using a tractor. “That’s better for the animals. For them, it’s hard work,” says Uyadagwa. His family is one of few who still uses horses, not for mow but for raking the gras. For this purpose, they have a big two-wheeled wagon, drawn by Khaliun. The word Khaliun means dun-colored. In Mongolia, horses do not have proper names. They are named for their color. Previously, the dun was a racehorse until he broke a leg. The family has nursed him back to health and since then uses him as a draft horse. “The race horses are always kept close to the yurt,” explains Uyadagwa, “so they are used to people and very obedient.” 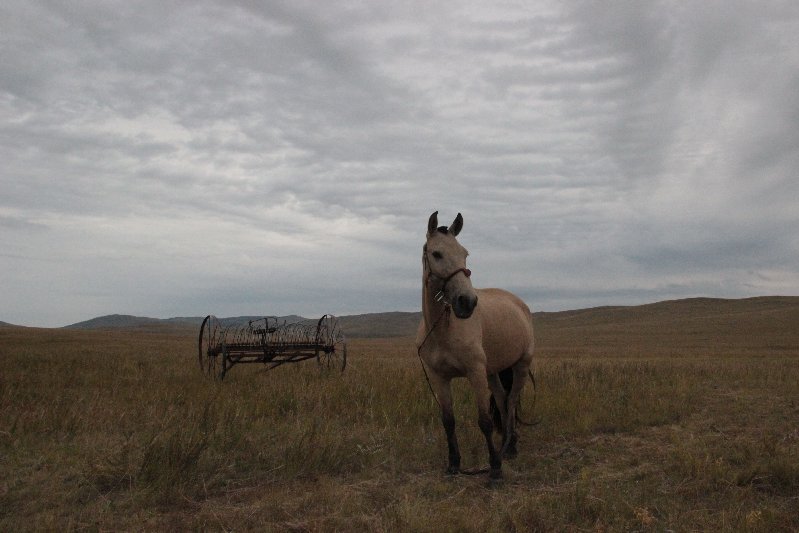 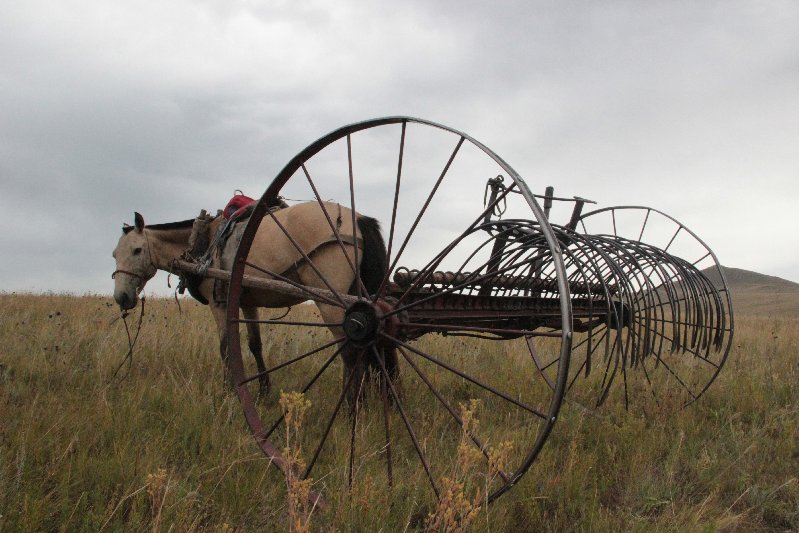 The dun looks like nothing could get to him. Calmly, he pulls the rake. Every now and then, he grabs a bite of grass and chews on it, while working. Batchuluun, holding the reins in his hand, lets him have his way and just sometimes drives him forward with the words: “Shu! Shu”. Together, they manage to rake up three large piles of grass in less than an hour. 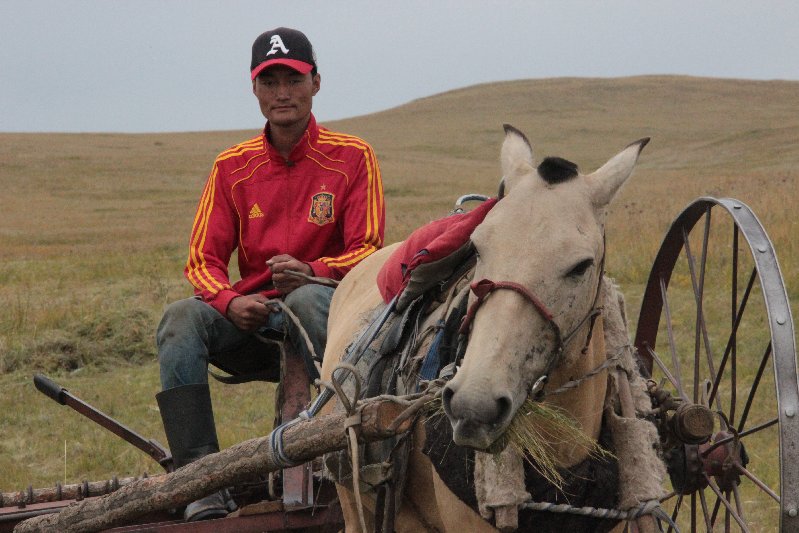 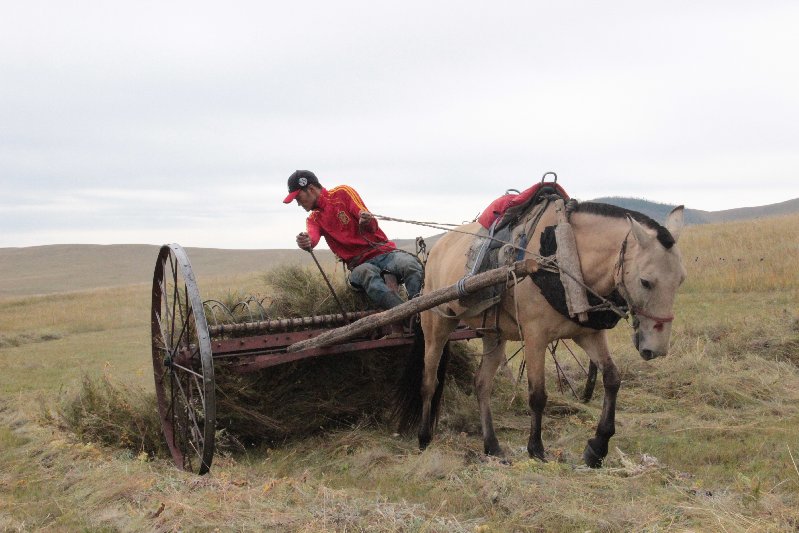 The brothers have to get the grass to the winter storage today. There they will dry it in the sun. “It’s too dangerous to let it dry out here,” says Uyadagwa, “the free-roaming horses or cattle would eat up in no time.” 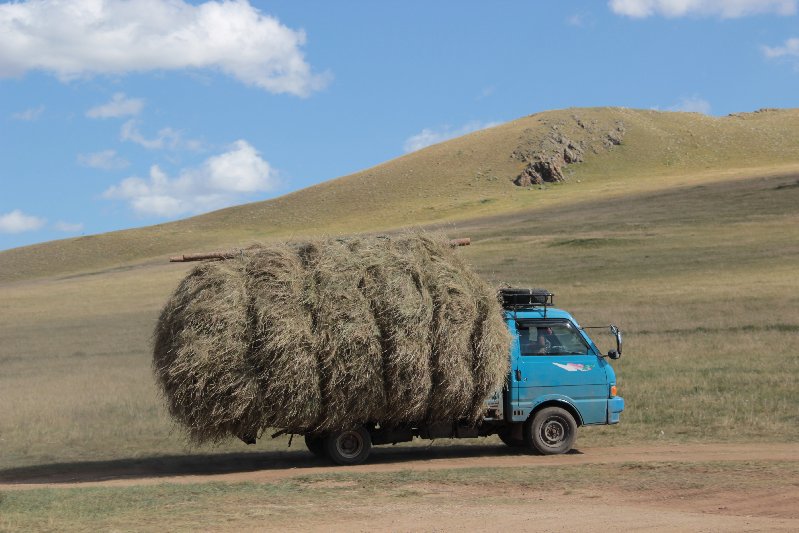 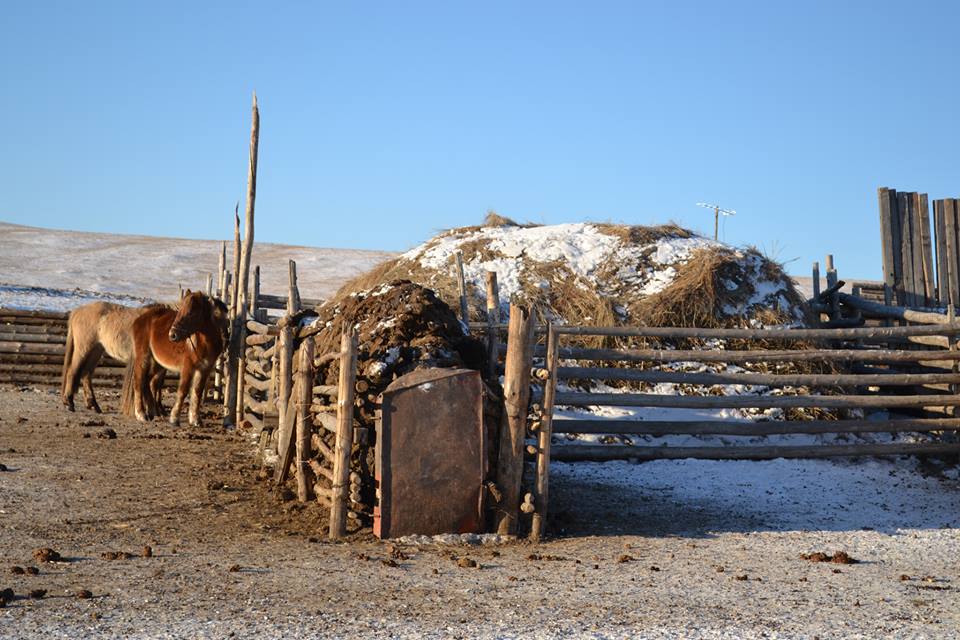 The land here does not belong to anyone. All families in the area let their cattle graze there. In the Mongolian steppe, there is no idea of real estate. The families put up their tents, where they have been doing it already for generations. Everyone knows their neighbours, land charge registers are not necessary.

Photos (all, except for the last one): Lochner
Last photo: Khishig